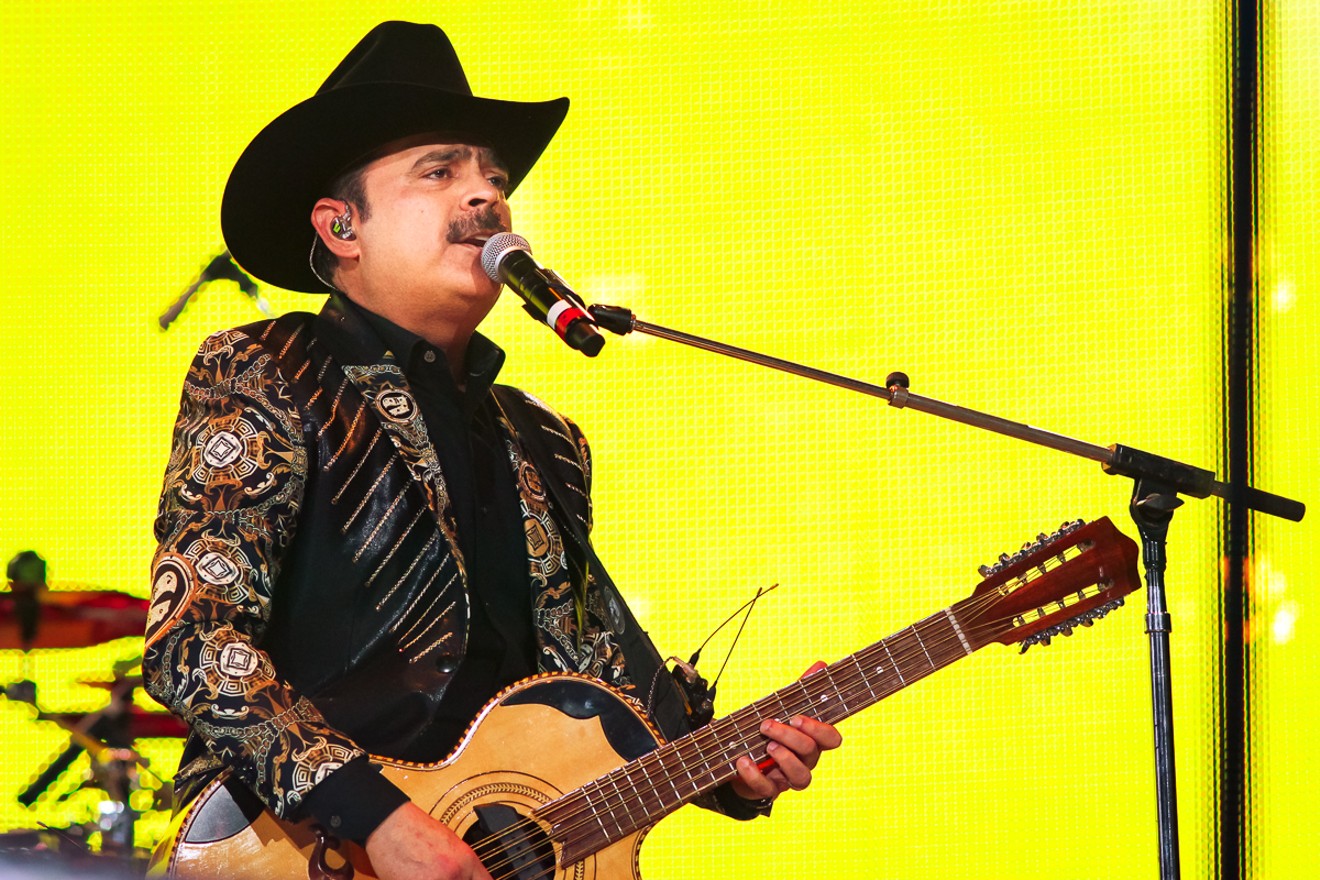 Iconic Mexican band Los Tucanes De Tijuana headlined Go Tejano Day at RodeoHouston on Sunday at NRG Stadium. Photo by Marco Torres
Gather around everyone... Let me tell you a story about a famous person. Everyone knows her by her nickname: La Chona. She goes out dancing every night and buys herself a bottle, attracting a dance partner right away. People cheer as she moves, and nobody dances quebradita better than her!

Those are the translated lyrics of what is probably the most infectiously popular Mexican song of all time, up there with La Cucaracha and La Bamba. Like the band that made her famous, the song La Chona is fun, flashy, and full of life.

Fan favorite song "La Chonca" was so good, the band performed it twice!
Photo by Marco Torres
Los Tucanes De Tijuana (the toucans from Tijuana) is a Mexican band which is now based in Los Angeles, California, but with origins in the Mexican state of Sinaloa as well as their namesake, Tijuana. To say that they are a party band is a great understatement. They embody the party with every note, lyric, and dance move.

This is the second time that Los Tucanes have played RodeoHouston, the first time being in the year 2000. This time around, the group managed to attract a crowd of 70,124 in paid attendance. Definitely impressive, although not enough to be named as the largest crowd of this rodeo season.

The paid attendance for Go Tejano Day was 70,124. Definitely impressive, but not enough to break the attendance record this year at RodeoHouston.
Photo by Marco Torres
The set list ranged from corridos like El Centenario to love ballads such as Secuestro De Amor. Los Tucanes are also well versed in songs that utilize metaphors to tell the stories. Mis Tres Viejas and Mis Tres Animales are tales about the necessary tools used by those in the narco-trafficking business.

The crowd was in very high spirits throughout the show, with couples dancing to corridos in the aisles, ladies moving sensually to the rhythms, and kids jumping up and down because, well... that's what kids do.

Lead singer Mario Quintero Lara asked the audience several times to illuminate the stadium with cell phone lights, and they definitely complied. "Lets show everyone that Norteño acts as capable as Reggaeton acts to throw a party like this one!" he declared from the stage.

Lead singer Mario Quintero Lara kept everyone in high spirits as couples danced in the aisles and kids jumped for joy.
Photo by Marco Torres
The loudest and most heartfelt sing-a-long was heard near the ending of the set with Mundo De Amor. Lara allowed the crowd to sing the chorus, smiling wide under his glorious mustache as the night crawled to an end. It was only fitting to replay La Chona for one last time before they left the stage, sending the crowd into a frenzied dance party as they ventured into the lovely and pleasant Houston evening.

The songs ranged from corridos like El Centenario to love ballads such as Secuestro De Amor.
Photo by Marco Torres
KEEP THE HOUSTON PRESS FREE... Since we started the Houston Press, it has been defined as the free, independent voice of Houston, and we'd like to keep it that way. With local media under siege, it's more important than ever for us to rally support behind funding our local journalism. You can help by participating in our "I Support" program, allowing us to keep offering readers access to our incisive coverage of local news, food and culture with no paywalls.
Make a one-time donation today for as little as $1.