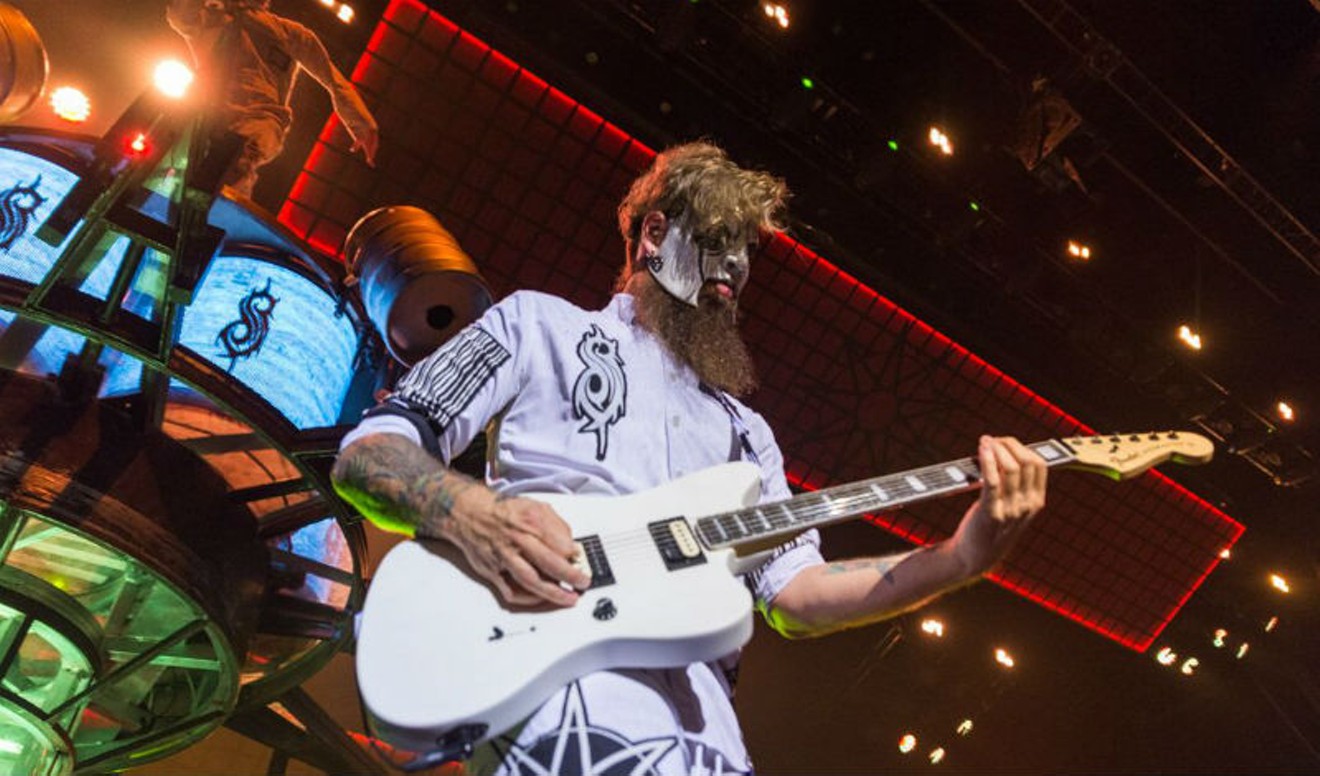 It was the final stop of the Knotfest Roadshow. James Root, also known as #4, shows his stuff. Photo by Jennifer Lake
Dark colors might not be the best clothes to wear on a hot sunny day, but this Sunday evening a black shirt with your favorite metal band’s name was the attire of the moment. A congregation of headbangers gathered in The Woodlands to witness the final stop of the Knotfest Roadshow tour.

Before Slipknot took the stage, Maggots, or fans of the masked, nine member band from Iowa, could be heard cheering as the banner displaying their name was hoisted into position. The anticipation was high. Slipknot has been absent for a few years, now, after a release of their new, No. 1 album, We Are Not Your Kind, Slipknot has been revamped and refreshed.

“It’s been a minute, but we’re fucking back!” vocalist Corey Taylor started off. “Are you ready to help me tear this mother-fucker down?!”

After the release of a new project, artists usually fixate on performing the newer material, but it was clear Slipknot was focused on pleasing the fans that have been with them for the long run. Starting the show with two older songs, ‘People=Shit’ and ‘(sic),’ the band then went into ‘Get This,’ a bonus track on the extended edition of their self-titled, debut album.

“How many of you are seeing Slipknot for the first time?” asked Taylor. After a few moments of surveying the extended hands of the crowd, responded, “Well where the fuck have you been?!” 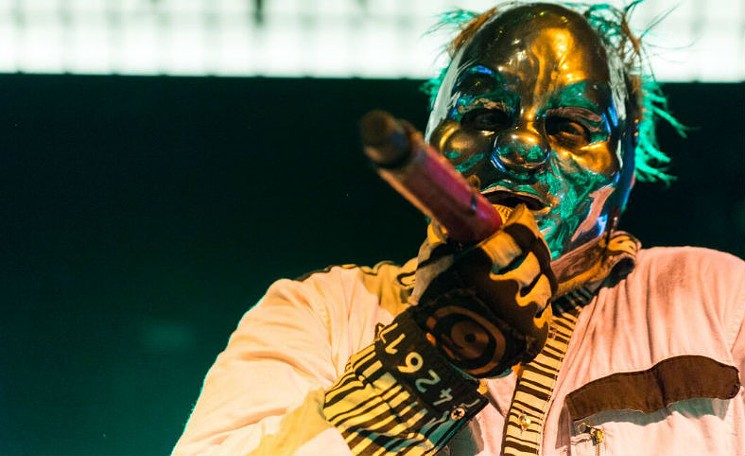 Fans sang along — even with songs from Slipknot's latest release. Shawn "Clown" Crahan kept things going.
Photo by Jennifer Lake
With an explosive, theatrical performance, Slipknot played a set intertwined with old hits and new tunes, to what looked like a sold out crowd at the Cynthia Woods Mitchell Pavilion. After the opening deep-cuts, the band was met with an ecstatic reaction to their newest anthem “Unsainted.” Fans old and new joined in on singing the chorus of the new hit song. “That noise right there, you are the one’s that gave us the No. 1 album in the country,” Taylor said. His screams, thunderous drums and wailing guitars flowed throughout the pavilion as the band played through their list of chart topping singles such as “Before I Forget,” “Psychosocial” and “Duality.”

Giant screens positioned behind and above the band, along with LCD wrapped drum sets displayed an array of graphics including fire, digital art, and Slipknot logos. Drums mounted on raising platforms, and a moving walkway were some of the props to the intricate stage set-up. While the guitars, bass, and drums rocked on, Sid Wilson, Slipknots DJ, ran around the stage, periodically interacting with other band members. In one dramatic display, he ran up and “beat down” the mysterious new “Tortilla Man” leaving him “dead” atop his drum set.

“We’ve been coming to Texas for 20 years now, and y’all have made us feel like we’re from here every time.” exclaimed Taylor.

After an almost two- hour set, Slipknot finished their show with an encore, playing two more songs off their self-titled album, but not before wishing drummer Jay Weinberg a happy twenty-ninth birthday. Weinberg then had a giant birthday hat strapped to his head to finish out the set.

1. People = Shit
2. (sic)
3. Get This
4. Unsainted
5. Before I Forget
6. Solway Firth
7. The Heretic Anthem
8. Psychosocial
9. The Devil in I
10. Prosthetics
11. Vermilion
12. Wait and Bleed
13. Sulfur
14. All Out Life
15. Duality
ENCORE:
16. Spit it Out
17. Surfacing
KEEP THE HOUSTON PRESS FREE... Since we started the Houston Press, it has been defined as the free, independent voice of Houston, and we'd like to keep it that way. With local media under siege, it's more important than ever for us to rally support behind funding our local journalism. You can help by participating in our "I Support" program, allowing us to keep offering readers access to our incisive coverage of local news, food and culture with no paywalls.
Make a one-time donation today for as little as $1.