The Woodlands Pavilion was hot and muggy Saturday on a night when the two of the world’s biggest shock rockers brought Twins of Evil, The Second Coming to perform for a nearly sold out venue. Marilyn Manson and Rob Zombie paired up six years ago and the tour ultimately did not end very well. Amends were made and the two decided to give it another go. The co-headliners gave the crowd different experiences as one of them was ailing. Marilyn Manson had to cut his set short due to illness.
Photo by Jack Gorman
Marilyn Manson
The anti-Christ was in Texas and The Woodland’s crowd clamored for Satan’s little helper as time drew well past the announced set time. Just as the show was about to start the band’s tour manager escorted photographers from the pit and explained that Manson was feeling very ill and did not want his picture taken.

When Manson finally came out to “Cruci-Fiction In Space” he absolutely gave it his all. He held on to the brass knuckled microphone attached to the stand, shouting his lungs out. There were very long breaks between songs with the stage blacked out. To borrow a line from his co-headliner, Manson proved he was more human than human by coming out and giving it literally everything his body could muster. He was mostly stationary and visibly shaking at times while he braced himself with the microphone stand. Upon finishing “Sweet Dreams” he collapsed on top of one of the monitors. Roadies could be seen on the side of the stage worriedly contemplating on whether or not to assist him.

Rumor has it that the sickness was caused when Manson took holy communion earlier in the day for the first time in 30 years. That’s not true; talk backstage speculated that it was a horrible case of food poisoning. The crowd’s reaction during the call and response for “This Is The New Shit” pretty well summed up Manson's set: Zombie called on the crowd to scream loud enough to bring out Satan.
Photo by Jack Gorman
Rob Zombie
From his days in White Zombie to his latest releases, Rob Zombie’s stage show are incredible. The stage is bathed in saturated and vibrant colors. The horror imagery is plastered everywhere and flashes constantly on the several screens. He delivers the consummate rockstar performance by focusing on the big three themes: sex, drugs and rock and roll.

The band played a tight and thunderous set spanning across all of Zombie’s albums and a few covers. The bandmates were flying all over the stage and changing outfits and switching instruments quickly between songs. The menacing dread-headed did not seem as frightening seeing him do the hoedown in shimmering bell bottoms. John 5 performs with Rob Zombie at The Woodlands.
Photo by Jack Gorman

Guitarist extraordinaire, John 5 performed an extended solo while his front man took a trip around the pavilion to be with the people. He carried a spotlight to, “spy on the people in the grass, sitting on their ass. So it’s time to put the phones away and have a mother fucking rock show!”

Zombie called for the crowd to scream loud enough to bring out Satan. The crowd did as commanded and the oversized devil character waltzing around the stage as the John 5 belted out he familiar riffs of “Thunderkiss ’65” on his Fender. The group stopped the White Zombie classic and inserted covers of “Schools Out” and “Blitzkrieg Bop” before finishing up the original song. 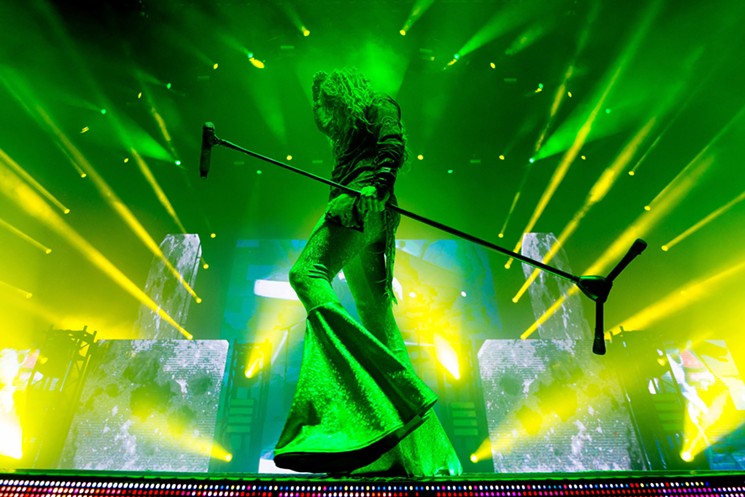 Rob Zombie asked the crowd to help out on "Helter Skelter"..
Photo by Jack Gorman

Many fans were aware of the duet that the Twins of Evil had been performing. However, no one expected it to occur after the earlier events transpired. “My dear friend Mr. Manson is feeling under the weather. He’s probably on the bus feeling like crap. I need a partner for the next song so let’s sing it really loud and make him feel better. This is “Helter Skelter.” The surrounding screens were now projected scenes from interviews and news footage of Charles Manson and the Manson Family. The cult leader’s dance moves that were playing on the massive displays seemed oddly familiar. They are moves that Zombie has been performing on stage for years. Adam Levine got the moves like Jagger, but Zombie got the moves from a real life madman.

After briefly exiting the stage and showing the movie trailer for his upcoming 3 from Hell film, the band returned to end the night with “Dragula”. The rockstar spun his way off stage after saying peace to the frothing crowd. As much as the fans were pumped from the songs about racing, there was a standstill for quite some time in the parking garages.

The Crowd: It was the Pavilion of 1,000 Corpses packed with Living Dead Girls, Gore Whores, Lords of Salem, Creepers and Superbeasts with very long goatees.

Marilyn Manson Setlist
Cruci-fiction In Space
Angel with the Scabbed Wings
This is the New Shit.
Sweet Dreams
Antichrist Superstar

Zombie and band ended the night with "Dragula."
Photo by Jack Gorman


Update 9:30 a.m. 08.20.2018: Just after midnight on August 20, 2018, Marilyn Manson released a message through his Twitter account showing his gratitude to fans and that he received attention from a doctor.

Thanks Houston for being understanding. I ended up in doctor’s care, but I gave it my best and you guys were amazing.