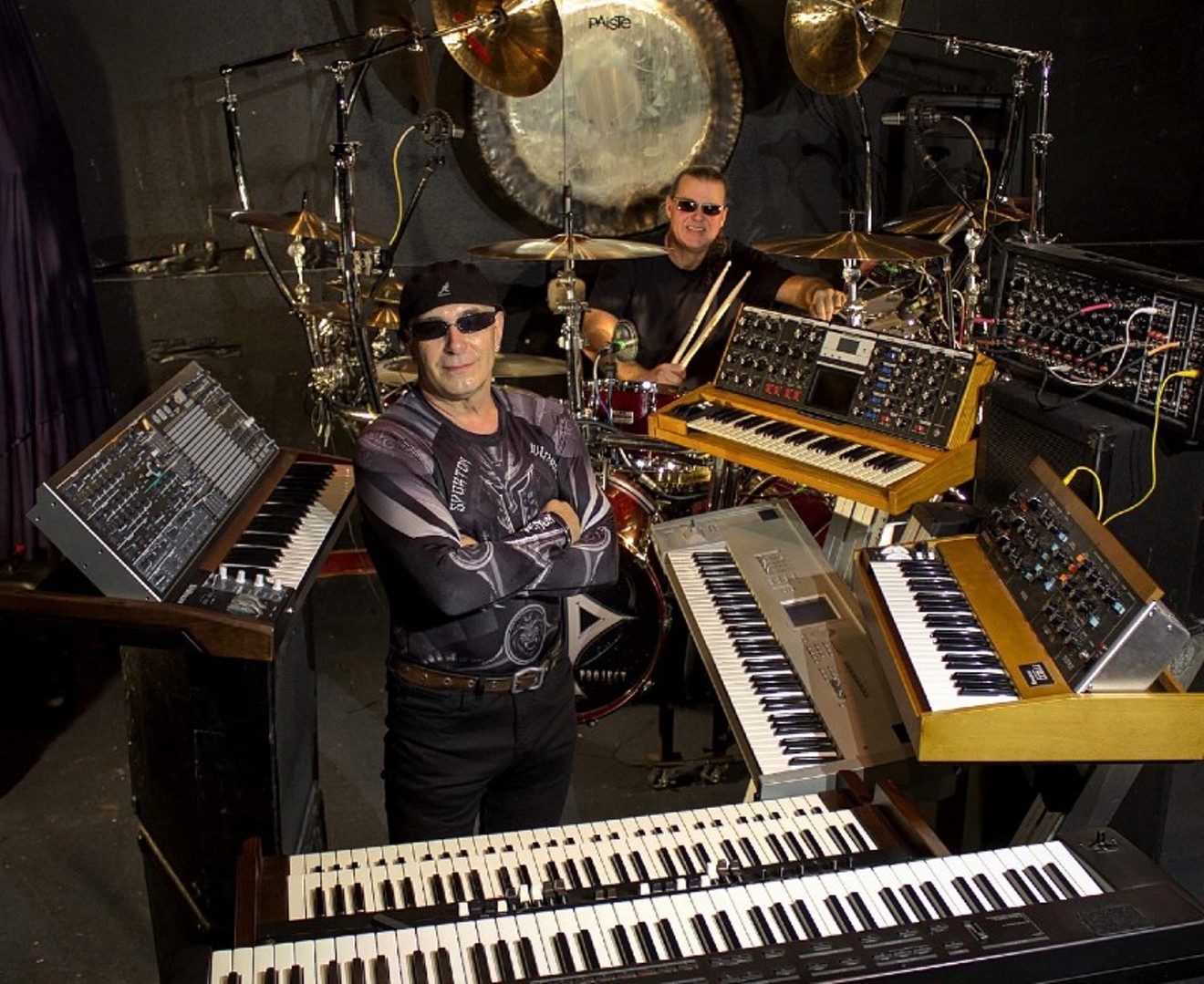 Ask Craig LeMay and Roby Deaton, the Houston musicians and namesakes behind the Deaton LeMay Project, and they’ll tell you timing is everything. It’s certainly critical to their style of progressive rock. They believe their debut album, Day After Yesterday, might have fared well in a long-ago music industry where major labels ruled,  in a time when it might have shared record rack space with their prog rock idols, bands like Emerson, Lake and Palmer, whose “ELP” nickname gets a not-too-subtle nod from Deaton LeMay Project’s own “DLP” abbreviation.

Still, LeMay said, an album like Day After Yesterday could only exist today. Although the project began nearly 20 years ago with the longtime friends recording on cassettes at LeMay’s home studio, it took recent music industry developments to complete the album, which was released late last year. The timing for DLP was finally right.

“We started a project and it was done, we went as far as we could go, could not find the right musicians to fill the holes we felt needed filling to make the songs complete,” said LeMay, who credits Deaton for jump-starting the stalled vehicle. “He bumped into some website that had all these musicians, any instrument there was, that were available for hire per song. So, you pay them a fee and he found our vocalist immediately, he started a conversation with him, and all of a sudden we got the vocal track back within a week on our first song and we were just blown away.

“We’re in the digital era now and everything can be done,” LeMay said, noting he and Deaton have never met the band’s vocalist Hadi Kiani. “Sadly, I’ve never shook his hand. We can do this, as teamwork, through the Internet. Who would have ever thought of that in the ‘80s when these songs and this style was being developed that we all fell in love with? The digital thing completed the puzzle.”

Deaton (keys, acoustic guitar and Portuguese guitar) and LeMay (drums) are the band’s songwriters. They added Virginia-based vocalist Kiani and a pair of far-off guitarists to the mix. Ehsan Imani, a music producer who resides in London, and Josh Mark Raj, who lives in Chennai, India and is a Bollywood recording artist, came on as guitarists. Closer to home, the band tabbed veteran Houston guitarist Joel Gregoire to round out the roster.

The album, not currently streaming, but available on Amazon, iTunes and the band's website, has sold in the States, as far away as Romania and Finland, and in the U.K., a prog rock stronghold. And, the reviews have been impressive. Quebec progressive rock site PROFIL gave the album “nine out of ten stars.” House of Prog, a website devoted to the genre, fawned over the album in an interview with the band. The track “Silent Stone,” which Deaton said is his favorite from the album, appears on the compilation CD accompanying the March issue of Prog Magazine. 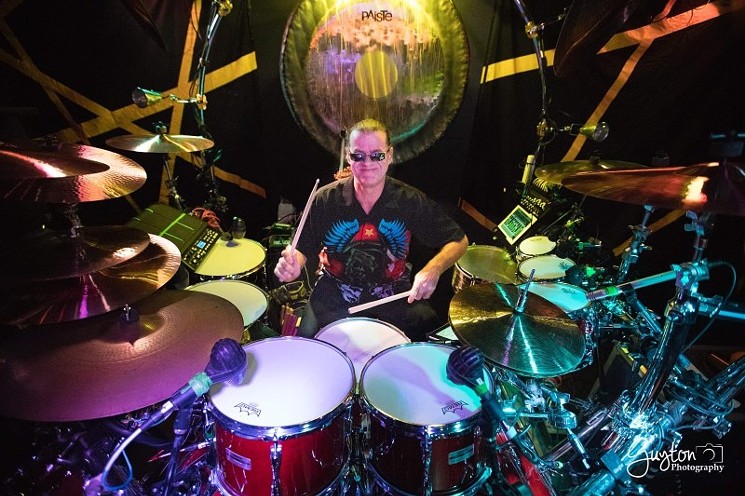 “The reaction we’re getting, it’s heartfelt,” LeMay said. “It’s nice to be appreciated and see the reviews being printed up. We’re trying to build a fan base one day at a time.”

They’re doing that by challenging each other musically. A simple discussion of how one song, “Fade Away,” is reminiscent of Trick of the Tail-era Genesis becomes an instant music lesson from professors Deaton and LeMay.

“That section of that song, the instrumental part, the measures alternate, they’re 5/8 and then 6/8,” said Deaton, leading us down the rabbit hole of prog rock music theory. Hang on music geeks, it gets more detailed.

“What I like to do is write an odd meter but then keep it musical. Some of the prog bands, they do a lot of time changes and it feels like you’ve cut and pasted the parts together,” said Deaton. “I feel like we try to make it flow at least.”

“I call it evens and odds. I try to make the groove even,” LeMay chimed in, “and you’re playing in the odd factor, and I’m underlying you.”

“It’s so easy to write with him,” LeMay continued. “This is no ego, I just have a great sense of timing and I understand how to make things sound and flow in an even factor even though there’s a lot of those prog mathematics below it. It’s our little formula. It’s not like we tried to make it that formula, it’s just what happened, it’s how we both think. And it flows. If it doesn’t flow, we won’t use it, that’s the bottom line. If it doesn’t flow, we’ll just save it for some other day when it does work out.”

LeMay concedes his sense of timing might be hereditary. His mother was a drummer in her college marching band and he’s been playing since the late 1960s. He studied music at University of North Texas and learned by listening to favorite bands like Grand Funk Railroad and the ever-present ELP. He’s a published author who wrote about Queensryche drummer Scott Rockenfield and he’s played in Houston-based bands like Big Left Turn and Best of Both Worlds, a Van Halen tribute act.

“The influences, obviously, of the progressive rock began with Emerson Lake and Palmer and later, it morphed. I mean, of course, who wasn’t influenced by Rush - Neil Peart - and after that I started my own drum school,” LeMay shared. “In 1979 I started teaching professionally and I still haven’t stopped. I’ve been teaching since ’79, so we’re in my 41st year of educating. That’s my sole job. It is pretty cool, because I got away with it. I literally got away with being a professional drum teacher.”

Deaton, also a professional music instructor, was playing piano by the age of five. He taught himself guitar and picked up violin as an adult. After a five-year stint in the Air Force, he landed in Houston and LeMay was one of the first people he met, by way of a band tryout.

“I moved to Houston back in ‘90, ‘91 and was looking to play here and there was an ad for a keyboard player and I contacted them and the bass player, Vic Sorenson, he asked me to come out. I was setting up my gear and we started playing something and I knew within 30 seconds of playing, I said, I want to play with these guys,” Deaton recalled. “The bass player, he looked like (Yes’s) Chris Squire, he played like Chris Squire, he was a Chris Squire freak. The three of us, we played nine or ten months together, four or five nights a week, we would rehearse late at night. We found a guitar player and a singer and the name of the band was CINEMA.”

CINEMA opened for Dream Theater at the Tower Theater in the early 1990s. Once it disbanded Deaton focused on solo music and has since released several albums.

Both have been active in getting the new album to listeners who might appreciate it. Deaton said those listeners are mostly overseas. The national prog rock scene isn’t that strong, he said, but he’s hopeful fans from several generations will see DLP as a fresh take on the genre.

“I was telling Craig music always comes back in waves and maybe we’re on the next wave of that old (sound),” Deaton said.

“I’m always thinking in the back of my mind, how would this have been if we’d put this out back when ELP was doing this stuff? Just to know how it would have been received that way, with a serious, strong record company push,” LeMay pondered. “Now we know it is the DIY generation. You’ve got to push it and plug it and go on the Internet and do your best.

“Getting out and playing it live is obviously going to cost us a pretty penny but we’re willing to do that if we find the right crowd,” LeMay said, signaling the next step for a band that was born in a studio nearly 20 years ago and exists today because of modern recording technology.

“Our intentions are festivals. There are prog festivals around the United States and our intention would be to fly out or even drive up and do a show or two accordingly,” LeMay said. “Maybe even do one of those (prog rock) cruises once we get the world back in order. We’ve got time and the world’s got time, so we’ll figure it out.”

“We’ve already got plenty of songs written for the next album,” LeMay continued, and added that the players from Day After Yesterday are committed to returning for the follow-up. “We’re not searching for, ‘How can we top this first album?’ There’s no doubt our minds we’re just moving on to the next step above it.”
KEEP THE HOUSTON PRESS FREE... Since we started the Houston Press, it has been defined as the free, independent voice of Houston, and we'd like to keep it that way. With local media under siege, it's more important than ever for us to rally support behind funding our local journalism. You can help by participating in our "I Support" program, allowing us to keep offering readers access to our incisive coverage of local news, food and culture with no paywalls.
Make a one-time donation today for as little as $1.