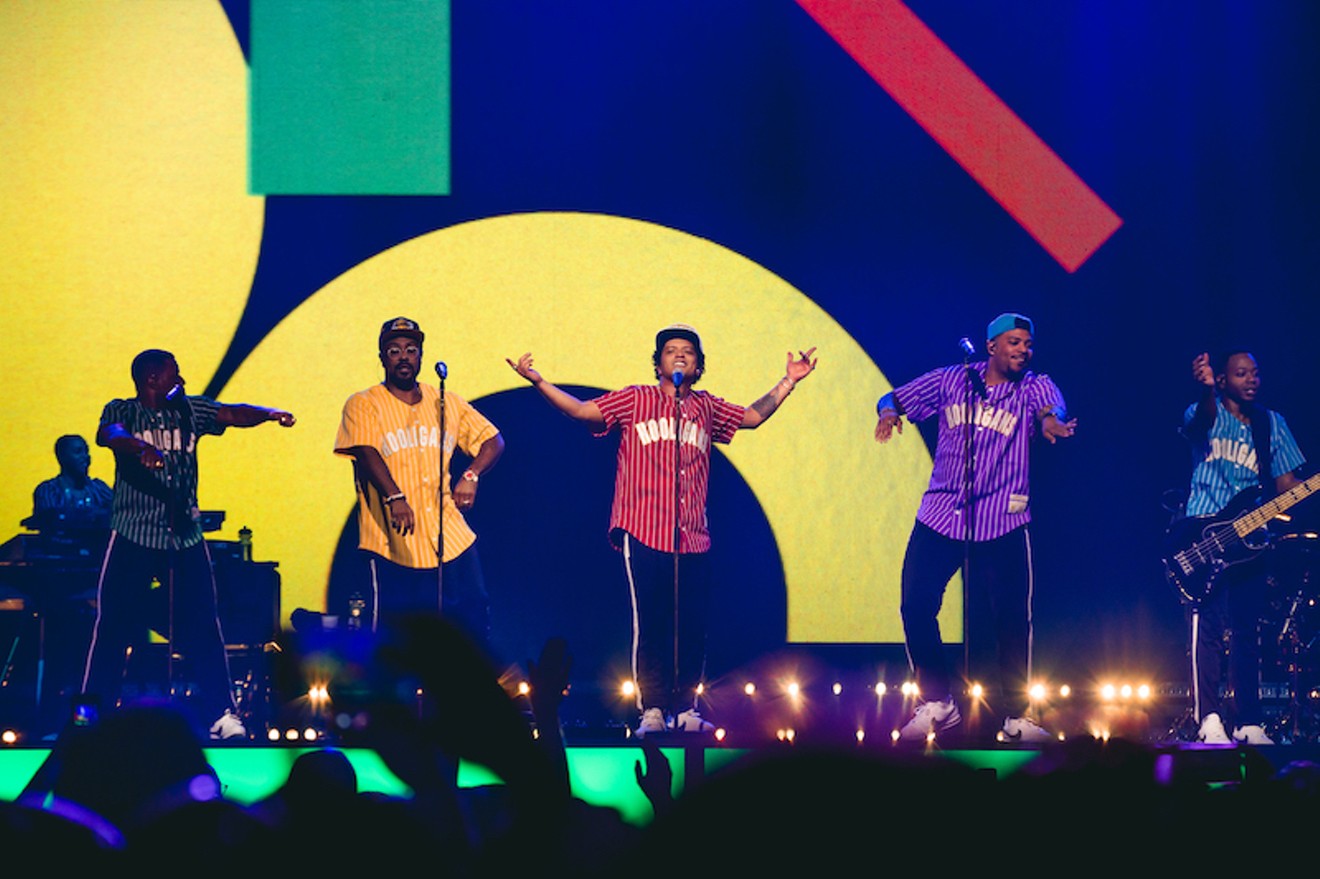 Bruno Mars is a global pop superstar and would normally be the hottest ticket in town on any Houston visit, but not this week. That honor would go to those tickets emblazoned with Major League Baseball's World Series insignia and the Houston Astros logo. While the local heroes dropped Game 1 of MLB's championship series in Los Angeles Tuesday night, Mars made a Toyota Center stop as part of his 24K Magic World Tour. He even dressed in the jersey of his favorite team. It wasn't Dodger blue or Astros' orange — it was blood red, with the word "Hooligans" stitched across it. That is the moniker of his incredible backing band. They're an all-star group and Mars, their leader, is what baseball fans call a "five-tool player."

Mars' rabid fans got to see his skill set over the course of 16 songs last night, many drawn from his most recent release, 24K Magic. They laughed when a new favorite, "Calling All My Lovelies," gave Mars the chance to do a bit onstage and boast his comic timing. They sat in awe as he played a wicked guitar solo for the naughty gem "Gorilla," looking and sounding a lot like one of his influences (and a fellow multi-instrumentalist with sexy songs), Prince. On "Runaway Baby," he got the Hooligans and all of the crowd on the good foot, a la James Brown. And, of course, the fans cheered his one-of-a-kind voice, whether it was just saying hello or hitting spine-tingling notes on favorites like "When I Was Your Man" or "Just the Way You Are."

Mars is smart enough to share the spotlight onstage with his amazing band, The Hooligans.
Photo by Florent Dechard/Courtesy of Warner Music Group
He can act, play, dance and sing. Four tools. The fifth would be Mars' savvy about his brand. In a relatively short time, he's become one of the best-selling recording artists of all time. Most of that success is attributable to his musical prowess, but some of it stems from making career decisions that work for him. For instance, he could hog the spotlight nightly on the road. Instead, he's broadened it to also shine on his amazing band. Smart man.

Some at last night's show might have considered the set canned. Honestly, there were moments where the patter felt very "fill-in-city." For an artist who is routinely described as personable, it seemed odd that Mars wouldn't ask how we're all doing after Harvey. No mention of the recent hardship at all. He's been here twice this year now, the last time during the city's Super Bowl festivities, but he shared no fond recollections of playing here just months ago. Even with Astros caps and jerseys dotting the crowd, and he himself wearing a baseball garment, he made no comment about the World Series, arguably the biggest thing going for Houston currently.

But Mars knows his role. He's an entertainer. If you want to hear his opinions on things, see if he'll do a Reddit AMA sometime. He came to entertain and he and his band did that astonishingly well. If the show seemed scripted then consider the script Scorcesian in scope with the front man doing award-winning work akin to DeNiro in his heyday, surrounded by a stellar supporting cast (including trombonist/vocalist Kameron Whalum III, whose uncle is Kirk Whalum, contemporary jazz master and former Houstonian).

The only hotter ticket in town Tuesday night was for the Astros in the World Series.
Photo by Florent Dechard/Courtesy of Warner Music Group
You, as a viewer, feel privileged to watch the story unfold with the precision intended. For instance, the stage design transformed from one song to the next, in essence creating 16 different rooms for the songs being played. Big ones, like the encore, "Uptown Funk," called for more room, a den full of smoke and fireworks (and, literally, fire extinguishers). "When I Was Your Man" felt like finding a folded, regret-filled note hidden in the cranny of a secret room. It was a little thrilling to feel like an invited guest to that space.

Of course, the most choreographed element of the show is the actual dance choreography Mars and his band perform flawlessly. Like the stage design, the moves change from one song to the next. When Mars calls them the hardest working band in the business at the end of the set, you don't doubt it because you've already wondered repeatedly how the hell they can be so tight musically while doing more dance routines than the average high school drill squad.

If you're an Astros fan, you could easily be a Bruno Mars fan. Both teams were built from a rich talent pool and by following well-laid plans.

Our reviewer's wife considers Mars an entertainer on par with Prince.
Photo by Florent Dechard/Courtesy of Warner Music Group
Personal Bias: Like most music fans who enjoy boundless talent and charm, I too am a Bruno Mars fan; however, I pale in comparison to Mrs. Sendejas, who took in last night's show with the excited glee of a 16-year-old (and I should know, since I knew her when she was 16). Back then when my music tastes were mostly Billy Joel, jazz and what you now call "classic rock," she was a pop music fan who broke down my snobbish barriers with repeat plays of Madonna, Cyndi Lauper and Prince, whom we all ultimately saw live at her urging. She still loves all things pop. So her assessment or last night's show carries more heft than mine. She said it was one of the more enjoyable live shows she'd seen by possibly the most talented artist she'd seen. And yes, I did just say she once saw Prince.

The Crowd: Multi-generational and encompassing all cultures. Girls' night out, all dressed up. Fans in Astros gear crowding TVs in the concourse and suites to watch the game before the show. People who scream out loud when the 1992 House of Pain rager "Jump Around" is summoned before the headliner hits the stage.

Random Notebook Dump: Shout-out to Michael, one of the nice and hard-working folks keeping things moving smoothly at the Toyota Center Box Office. He told us he loves the Houston Press and that it's one of his favorite reads. Thanks for reading, sir. See you at Lady Gaga!

You have to wonder how long before we see Mars at another Super Bowl halftime show.
Photo by Florent Dechard/Courtesy of Warner Music Group
SET LIST
Finesse
24K Magic
Treasure
Perm
Calling All My Lovelies
Chunky
That's What I Like
Straight Up & Down
Versace on the Floor
Marry You
Runaway Baby
When I Was Your Man
Gorilla
Just the Way You Are