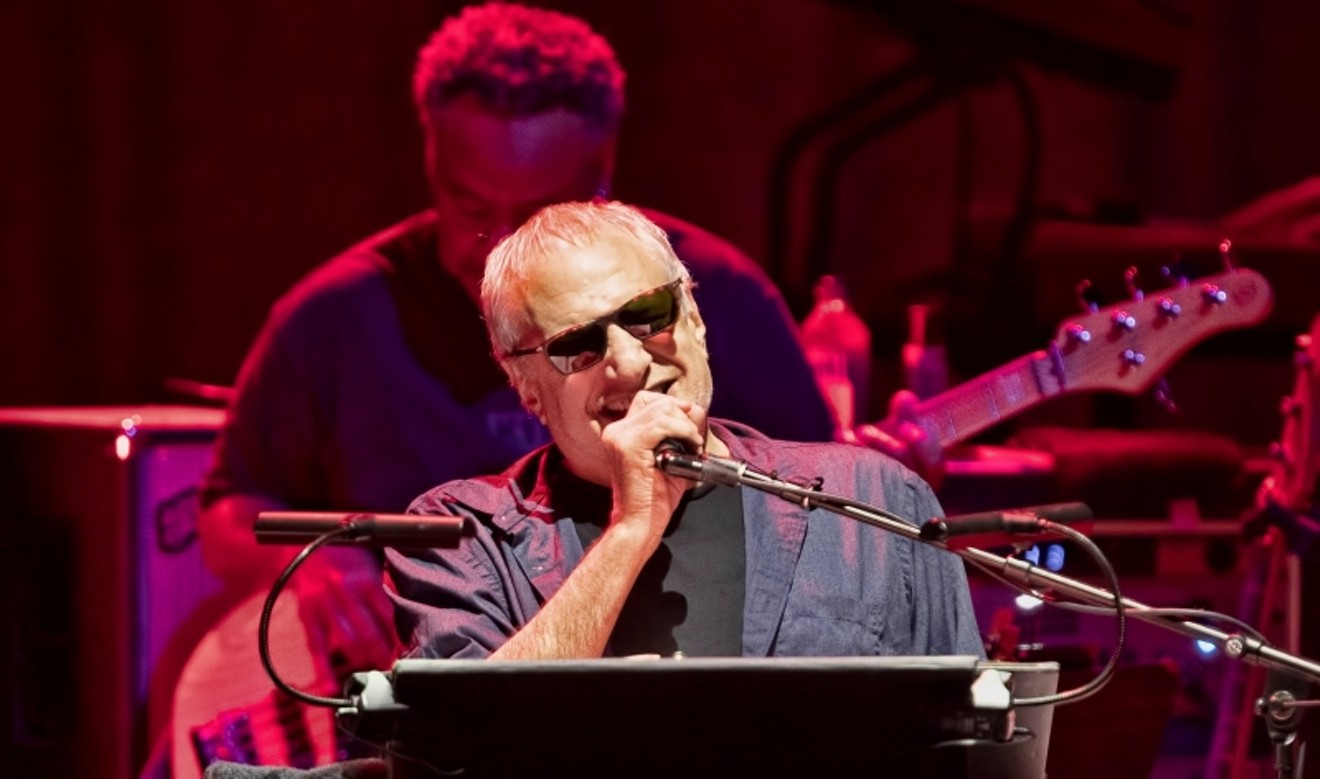 The house was full Friday night at the Cynthia Woods Pavilion, despite the fact that the band (such as it is) has released no music that could be termed “beloved” or even “popular” in more than 40 years. Sure, there are any number of acts who haven’t had a hit in decades playing the shed circuit this summer, but Steely Dan stands apart from them, in that founders Walter Becker and Donald Fagen and never set out to be rock stars. Far from it.

Always keeping a low profile, never appearing in gossip columns, and definitely not wrecking any hotel rooms, Becker and Fagen minded their own business, cranking out songs that merged rock and pop with a heavy dose of jazz, coupled with lyrics that might be called subversive. They were, as Rolling Stone termed them, “the thinking fan’s top 40 band.”

The only member of the original Steely Dan onstage Friday was vocalist / keyboard player Fagen. Becker went to the big jam session in the sky several years ago, but the band didn’t skip a beat. And therein lies the magic of Steely Dan. It has always been more a concept than a band. Like a chamber orchestra, the musicians in Steely Dan have come and gone, but the songs have remained the same. 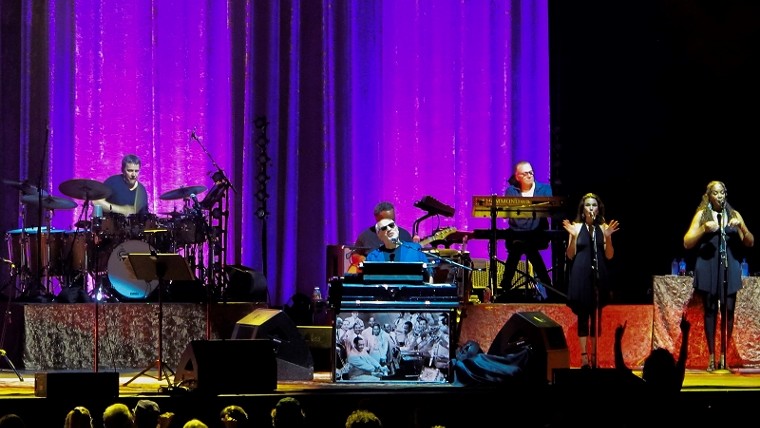 Vocalist / keyboard player Donald Fagen was at the helm, giving each member of the band a chance to shine.
Photo by Tom Richards / Anthony Carvajal
Primarily on the strength of the Becker / Fagen canon, music’s best and brightest have welcomed the opportunity to play with Steely Dan, considering it a badge of honor. If you’re good enough to play for Steely Dan, then you’re good enough for anyone, the thinking goes. If nothing else, Becker and Fagen always had exacting standards, ensuring that, whether in the studio or on the road, they had the best musicians available. Back from previous tours at Friday’s show were drummer Keith Carlock and John Herington, an unassuming guitarist who is, as they say these days, a beast. He played the solos from the Steely Dan songbook accurately and respectfully, but he threw in his own mojo, making for a transcendent musical experience.

These days, the trope that is often trotted out when classic rock bands are out on the road is the one that says, when the band announces, “here’s one from our new album,” half the audience goes for a beer and bathroom break. None of that nonsense with Steely Dan. Just one great song after another. “Black Friday,” “My Old School,” “Reelin’ in the Years.” On and on. “Kid Charlamagne,” “Peg,” “Dirty Work.” One masterpiece following the other, each one impeccably played, still with some room for a bit of improvisation. It seems that Fagen doesn’t want a perfect replication of the recording, but rather an honest performance of the song.

Every member of the band is valued, every player gets a chance to step out front, and each is recognized for the contribution that is made.

It is, for many reasons, unfortunate that Walter Becker is no longer with us. Despite the fact that Fagen may have been seen as the “star” of Steely Dan (relatively speaking) because he sang lead on most of their tunes, Becker’s contributions were beyond significant. Who knows who contributed what, but my money is on Becker for breathing life into the warped cast of characters who populate the best Steely Dan songs. Gino and Daddy G from “My Old School.” Lonnie, who “swallowed up all he found” in “The Boston Rag,” and the Unabomber-ish protagonist of “Don’t’ Take Me Alive.” Not to mention the LSD chemist on the run in “Kid Charlamagne” and the jewelry thief (we think) in “Green Earrings.”

Steely Dan has been lumped in with the Yacht Rock crowd, but this is both inaccurate and a disservice to the band. Sure, their music from the ‘70s goes down easy, like a piña colada on a hot day at an all-inclusive Mexican resort. But calling Steely Dan’s music Yacht Rock is like saying that Monet painted some pictures that look great on tote bags.

Friday night, Fagen had a large photo of Duke Ellington hanging on the front of his keyboard. Becker and Fagen said, over the years, that they took Ellington’s approach to heart, focusing, as the Duke did, on writing songs that featured the players in their orbit in the best light, making maximum use of their talents. This philosophy — giving their backing musicians a chance to shine —  is consistently present in the current Steely Dan show. Every member of the band is valued, every member gets a chance to step out front, and each is recognized for the contribution that is made. No wonder these guys love to play in Steely Dan. The joy onstage was evident throughout the night.

Donald Fagen frequently leapt up from the keyboard to exhort drummer Keith Carlock, the musical anchor of this current version of Steely Dan.
Photo by David Clements
Donald Fagen is no front man. And he never wanted to be. When he was thrust into that role in the early '70s, he had to take a Valium and wash it down with a couple of shots of booze (his account) before he could even think about going onstage. These days, Fagen has relaxed into his role as rocker familius. He plays the role of Big Daddy with the touring band, generously giving the spotlight to each of the assembled musicians, exhorting them and supporting their efforts. The female trio of harmony singers billed as The Danettes took the lead on “Dirty Work,” and Fagen couldn’t have been happier, cheering them on and leading the applause.

The stagecraft of Steely Dan’s show was, relatively speaking, subdued. No pyro. No smoke machines. No disco ball. Just a group of musicians uniting to give their best and pay tribute to an incredible body of work.

Was it wild? No. Was it off the rails? No. Was it illuminating? Yes. Was it fun? Double yes. The members of the audience, most of whom seemed to be in that 50s to 60s range, were beyond satisfied, hearing great songs played impeccably, with plenty of brio and conviction. Would that more shows were like this. Say, Donald, could you guys hang out here for a couple of more days?
KEEP THE HOUSTON PRESS FREE... Since we started the Houston Press, it has been defined as the free, independent voice of Houston, and we'd like to keep it that way. With local media under siege, it's more important than ever for us to rally support behind funding our local journalism. You can help by participating in our "I Support" program, allowing us to keep offering readers access to our incisive coverage of local news, food and culture with no paywalls.
Make a one-time donation today for as little as $1.