"Weird Al" Yankovic goes deep into the catalog on current tour. Photo by Todd Heisler/NY Times/Redux
Anyone who has seen “Weird Al” Yankovic (and yes, the quotation marks are part of the official billing) in concert knows what to expect: A string of his insanely catchy parody songs (i.e. “Eat It” “Like a Surgeon” “Smells Like Nirvana,” “Amish Paradise,” “Gump,” “Tacky”), a huge video screen, crazy light show, and costume changes. Lots of costume changes.

But for his current tour, the accordion-wielding pride of Lynwood, California, is trying something completely different: a stripped-down, no-frills production in smaller venues with a show that is made up almost entirely of his original comedy or “in the style of” non-parody songs and deep cuts.

Not surprisingly, those tunes tended to get overlooked, and he’s amassed a quantity of them over his career. Songs like “Velvet Elvis,” “Stuck in a Closet with Vanna White,” “Dare to Be Stupid,” “The Biggest Ball of Twine in Minnesota,” “My Baby’s in Love with Eddie Vedder,” and “Don’t Download This Song.”

“If they’re coming just to see the hits…they should stay home!” Yankovic laughs over the phone. “I’ve made no secret of what this tour is. It’s still a comedy show and it’s still enjoyable. It’s not the regular show. But there will still be that one person who yells out ‘Eat It!’”

Yankovic in a seedy backstage area with one of his many show biz friends.
Courtesy of WeirdAl.com
Just to make things interesting, no two set lists will be the same on the truth-in-advertising titled 76-date “The Ridiculously Self-Indulgent, Ill-Advised Vanity Tour.” And for even more fun, he’s throwing in a classic rock cover each night by the likes of Lynyrd Skynyrd, Elton John, Cheap Trick, and Neil Young. In a press release, he calls it a “musical palette cleanser” after 35 years.

For the pre-tour rehearsals, Yankovic says that he and his band – some of whom have been with him for decades - learned about 50 songs, with many never performed live or dusted off since their original recordings. He’s also taking requests online via his Twitter feed.

The interesting thing about “Weird Al” Yankovic is that, while he’s been putting out music since 1983, so every generation or age group has their own version of him. Whether they heard his work on the old Dr. Demento radio show, to the heyday of MTV, to something that went viral online. Because his work tends to reflect culture at the moment, he can never go out of style. One Millennial I know who remembers “White and Nerdy” (which parodies “Ridin’” by Chamillionaire) from high school was actually shocked to hear that he had such a history and was not just “a YouTube personality.”

So it’s only natural that Al would get the career-spanning box set treatment. Last year’s Squeeze Box: The Complete Works of “Weird Al” Yankovic featured all 14 of his studio albums, an additional album of rarities, and a 100-page booklet, all enclosed in an amazing replica of Al’s accordion. It has since sold out, but by no means does he see it as a stopping point or bookend to his career.

“I kind of addressed that in the liner notes, that by the time someone bought it, I would have put out something else, so it’s not the definitive collection. And it’s worthless!” he says. “It’s not meant to signify the end of my career, but it was a good time to do a retrospective.” 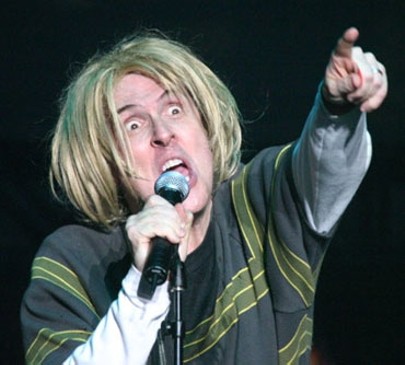 Yankovic channels Nirvana's Kurt Cobain onstage.
Courtesy of weirdal.com
And while Yankovic doesn’t legally need permission from artists to parody them, he still asks for it. Prince consistently turned him down, and Coolio was not happy with “Amish Paradise.” On the other side, Michael Jackson reportedly wanted more Yankovic takes on his songs. And Kurt Cobain famously said he didn’t realize he’s “made it” as a musician until Yankovic parodied the song and video for “Smells Like Teen Spirit” with “Smells Like Nirvana.”

Al’s last album was 2014’s Mandatory Fun, which he supported with a 200+ date tour and a debut at #1 on the Billboard chart – a career first. But even then, some of the songs he parodied: “Tacky” (Pharrell Williams’ “Happy”), “Word Crimes” (Robin Thicke’s “Blurred Lines”), and “Handy” (“Fancy” by Iggy Azalea) had already had their moment in the sun when the Al version came out.

Yankovic says that's the reason it’s likely the last of his “traditional” albums, and he can concentrate on releasing singles and videos online more quickly.

“I can now do whatever I feel like whenever I want to. I don’t have to wait until I have 12 songs ready,” he says. Two recent cases in point came in the form of “The Hamilton Polka” (a frenetic summary of the Broadway musical he did much to the glee of its creator, Lin-Manuel Miranda), and “The North Korean Polka.”

The latter he performed on John Oliver’s TV show “Last Week Tonight” to cap a segment in which the hosts pleaded with Kim Jong-un not to bomb the U.S.A. And the host tapped Yankovic to accentuate the point, as North Koreans for some reasons have a deep fondness for accordion music.


Yankovic was already a fan of the show and had made a guest appearance on the previous season. But this time he was on vacation with his family in Hawaii when he got the call requesting an original tune.

“I thought the idea was brilliant, and I asked if I could do it after I got back from vacation. And they said ‘No. Tick-tock. We need it for this Sunday,’” he says. “So I wrote the song in a day, wrote the charts, to New York on Saturday, rehearsed it with the studio musicians, and we did it on Sunday’s broadcast. I don’t normally write that fast, but I can if I need to!”

As for his memories of Houston, “Weird Al” does have one that stands out over his years of touring. And one that’s not surprising, given the culinary-centric tone of many of his songs.

“I remember one time I was in Houston, the deli tray was really, really nice,” he offers. “They had three kinds of lettuce, two different kinds of cheeses…it was a really, really excellent deli tray.”

For more in Yankovic, visit weirdal.com