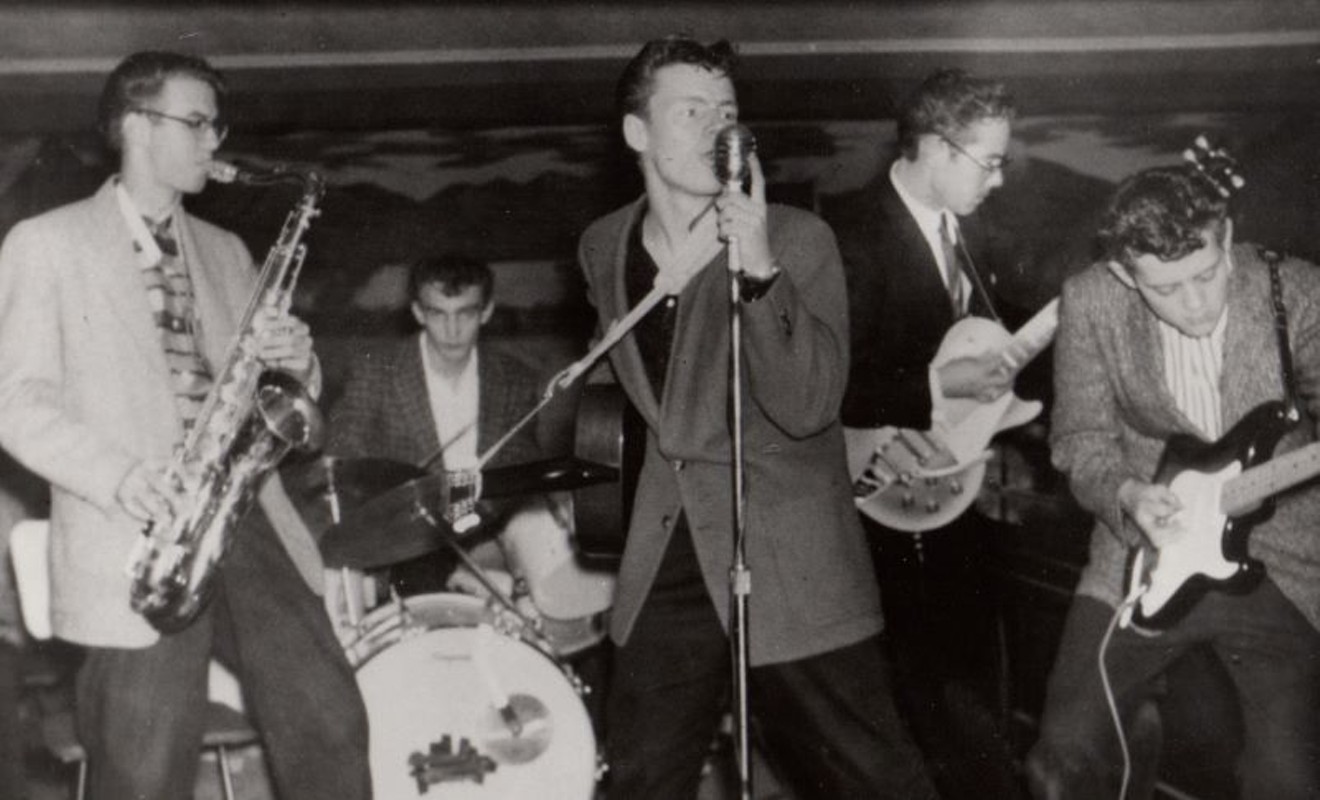 Delbert McClinton and his band the Straitjackets whipping the crowd into a frenzy around 1960. His new album Outdated Emotion returns McClinton to the music that he heard growing up in Fort Worth. Photo courtesy of the James Pennebaker archives
Delbert McClinton has been called many things – rocker, bluesman, honky-tonker - but never a poser. He is, as they say, the real deal.

McClinton,  a Texas musical treasure who started out playing Fort Worth juke joints as a teenager, has done it all in a career stretching back to the late fifties. Outdated Emotion, a collection spotlighting new recordings of songs from his youth, will be released on Hot Shot Records / Thirty Tigers on May 13, with a single, “One Scotch, One Bourbon, One Beer,” out on April 1.

Talking on the phone from his home in Nashville, McClinton speaks with conviction. At 81, he is a graybeard in the music community, but his intensity is not diminished. McClinton has won six Grammy Awards, recorded over 30 albums, scored a Top 10 pop hit (“Giving It Up for Your Love” in 1980), and even provided harmonica tips to a young John Lennon when the two musicians were on the same bill in 1962. So he has earned his bona fides.
“I started listening to rock and roll music in 1953,” McClinton says. “I wanted to make a record of the music that influenced me in my career, music that I’ve admired and learned from.” The songs on Outdated Emotion, famously sung by Little Richard, Jimmy Reed, Ray Charles, and Hank Williams, range from rock and roll to blues to country. “I wanted to show people this emotion again. The emotion that makes you want to dance and move. That makes you want to smile. This music is so refreshing to me.”

So why did a young White boy growing up in Fort Worth react so strongly when he first encountered Black music? “How could you not, once you heard it?” McClinton fires back. “It was better than what I’d been hearing. It had more backbone.”

Delbert McClinton, still spry at 81, explores rock and roll, blues, and country on his new record.
Photo by Clint Herring
The radio had a significant impact on McClinton. In particular, he recalls listening to Wolfman Jack on XERF, an AM station with a flamethrower of a signal that sat just over the Mexican border near Del Rio. “Wolfman Jack had a great line of shit,” he says. “That’s the secret. You've got to have a better line of shit than the other guy.”

McClinton loved the variety of music, noting that the station would segue from B.B. King to George Jones without a second thought. “That was when everybody wasn’t pigeonholed,” he says. In addition to a hip selection of music, XERF listeners also heard sales pitches for a variety of dubious products, including, so legend has it, autographed pictures of Jesus. “It was insane,” McClinton confirms. “You could order the most bizarre crap on the radio.”

McClinton and his band, the Straitjackets, established a devoted following around Fort Worth in the late fifties, playing a mix of rock and roll and rhythm and blues. A frequent venue was the Skyliner Ballroom, which had a retractable roof. “The top rolled back,” McClinton recalls, “and you could dance under the stars.”

The Skyliner was located on the infamous Jacksboro Highway, a stretch of road with an ignominious reputation. Along that route, someone looking for a good time could certainly find it among the numerous bars, clubs, and strip joints. In addition to playing their own sets, McClinton and his band sometimes provided musical accompaniment for exotic dancers.

When backing a stripper, what does a musician need to know? “That it’s pretty cool!” McClinton says. “I would go back to their dressing rooms, because you had to find out what the girls wanted to hear. Most of them wanted to dance to ‘Watermelon Man’ and ‘Peter Gunn.’ They were kind of playful. Sometimes they would ask you to help them put one of their pasties on. That’s front-line duty!”

The young musicians’ proficiency with the blues eventually led to gigs backing up star performers who would come through Fort Worth. McClinton says that, even during the era of segregation, there were no problems, nor any awkwardness, when they would perform with the likes of Jimmy Reed and Bo Diddley in front of both White and Black audiences. “No,” McClinton explains, “because they were our heroes. It was a real privilege.” McClinton points out that he smoked weed for the first time with Sonny Boy Williamson in the men’s room of Mother’s Place, “a barbecue joint, a Black joint” in Lawton, Oklahoma.

McClinton’s groups, particularly the Straitjackets and the Rondels, were known as great bar bands. That particular term has fallen into disfavor in some circles, with musicians saying that they (sniff!) “don’t want to sound like a bar band.”

“Why not?” McClinton asks, his tone bordering on indignant. OK then, what makes a bar band great? McClinton answers succinctly. “Passion.”

"Wolfman Jack had a great line of shit. That's the secret. You've got to have a better line of shit than the other guy."

“It was another time,” McClinton says, recalling his Fort Worth days. “Everything is gone. All that’s left are the memories. It was before all the madness. The fifties was like sitting on a slingshot. Somebody let go of it, and it shot off like a rocket.”

In addition to the blues, country music from McClinton’s early years is well represented on Outdated Emotion. McClinton says, “All my life, I wanted to record some Hank Williams songs. I live in Nashville, and I’ve got access to these fantastic musicians. They know their stuff perfectly.” Utilizing players who are well-schooled in the ways of Hank, McClinton cut three Williams tunes – to paraphrase Waylon Jennings – just the way Hank done it. 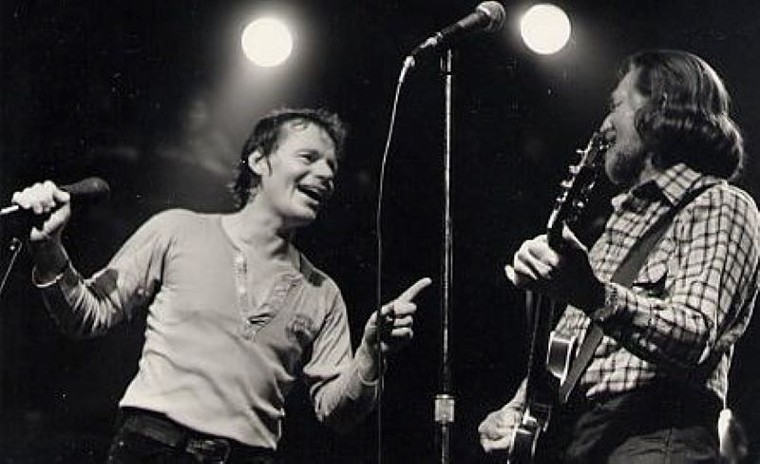 Delbert McClinton jamming with fellow Texas music legend Willie Nelson at Austin's Club Foot in 1982.
Photo by Watt Casey
“No drums, just bass, steel, guitar, and fiddle,” McClinton says, noting that he enjoys singing with minimal accompaniment. “I can record anything with bass and piano. It’s perfect. Nobody’s in your way. They’re only playing what’s needed. There’s nobody stepping on your part.”

Last year, McClinton announced that he was leaving the touring life behind. Now that he’s been off the road for a while, has he ever regretted his decision? “No. Not for a minute. I’m 63 years into it. It’s time for someone else. I don’t want to deal with 18-hour bus rides and hotel rooms with red carpet. I was a road warrior. I’ve done it all in triplicate. I’ve loved every minute of it, as much as I’ve hated some of it. It’s amazing. There’s a lot to look back on, all of it in excess. You learn a lot spending every night in a beer joint.”
KEEP THE HOUSTON PRESS FREE... Since we started the Houston Press, it has been defined as the free, independent voice of Houston, and we'd like to keep it that way. With local media under siege, it's more important than ever for us to rally support behind funding our local journalism. You can help by participating in our "I Support" program, allowing us to keep offering readers access to our incisive coverage of local news, food and culture with no paywalls.
Make a one-time donation today for as little as $1.