Young Dolph headlines the No Rules Tour Photo by Jennifer Lake
Key Glock, braced himself as he leaned out into the crowd. The lights in the House of Blues dimmed but the flash from the hundreds of camera phones in the packed house illuminated the Memphis MC and sparkling diamond chain draped around his neck. He stepped out onto the crowd, at first appearing to try and surf, but almost immediately stood up, shakily but steadily walking across the audience as the bass beat from “Everybody Know” thumped through the sound system.

Key Glock stood, held up by the audience while performing his verse from the 2019 collaboration Dum and Dummer, while his partner on the album, Young Dolph, hyped up the frenzied crowd. Dolph, dressed simply in dark pants and a black Gucci shirt, stood behind with his arms outstretched. He took a brief moment to adjust the diamond encrusted chain hanging around his neck, which appeared even brighter laying on the black T-shirt, and then turned back to the audience.

“I want ya’ll to light it up! Light it up Houston!” yelled the Memphis rapper as the crowd shined their lights on Key Glock and bounced inflatable dolphins and Orcas through the air. 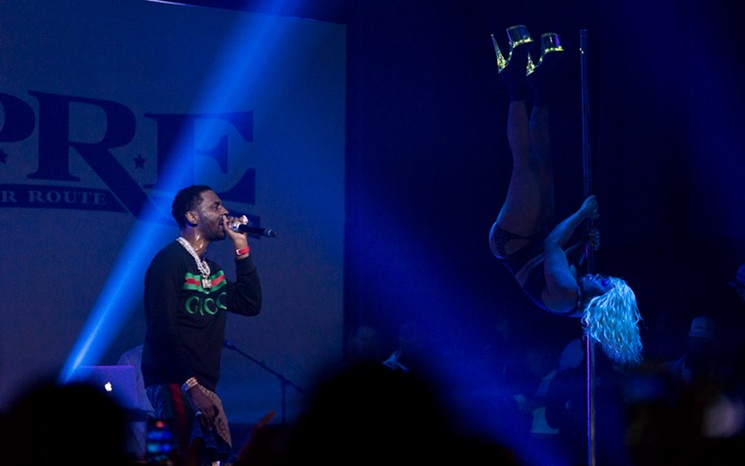 Young Dolph has made a buzz in the industry by building up his brand with consistent mixtapes, turning down major label deals, and keeping his own label independent. That ownership has afforded him the ability to sign his cousin Key Glock to Paper Route Entertainment. While others would have their label signee and protégée play a small role in the tour, Dolph and Key Glock share the stage almost equally.

The No Rules tour has Key Glock and Young Dolph touring the country and promoting their collaborative album as well as their solo work. The show featured a number of opening acts pushing the two headliners' entrance to almost 10 p.m. but once the curtain dropped to reveal the classroom set up on stage the crowd’s restlessness immediately turned into excitement.

Two stripper poles flanked the sides of the stage while a couple of dancers dressed like schoolgirls twerked to the music filling the building. The audience erupted in applause as one of the dancers “surfed” on top of the other one while spinning around the pole.

While some shows can suffer during brief lulls in music the No Rules tour had a comedian to occasionally come out and keep the crowd hype with jokes and different competitions.

“I hear Houston has the biggest Young Dolph fans!” yelled the comedian as the room yelled back in response. “If that’s true then I need y’all to scream and keep the party going.”
KEEP THE HOUSTON PRESS FREE... Since we started the Houston Press, it has been defined as the free, independent voice of Houston, and we'd like to keep it that way. With local media under siege, it's more important than ever for us to rally support behind funding our local journalism. You can help by participating in our "I Support" program, allowing us to keep offering readers access to our incisive coverage of local news, food and culture with no paywalls.
Make a one-time donation today for as little as $1.