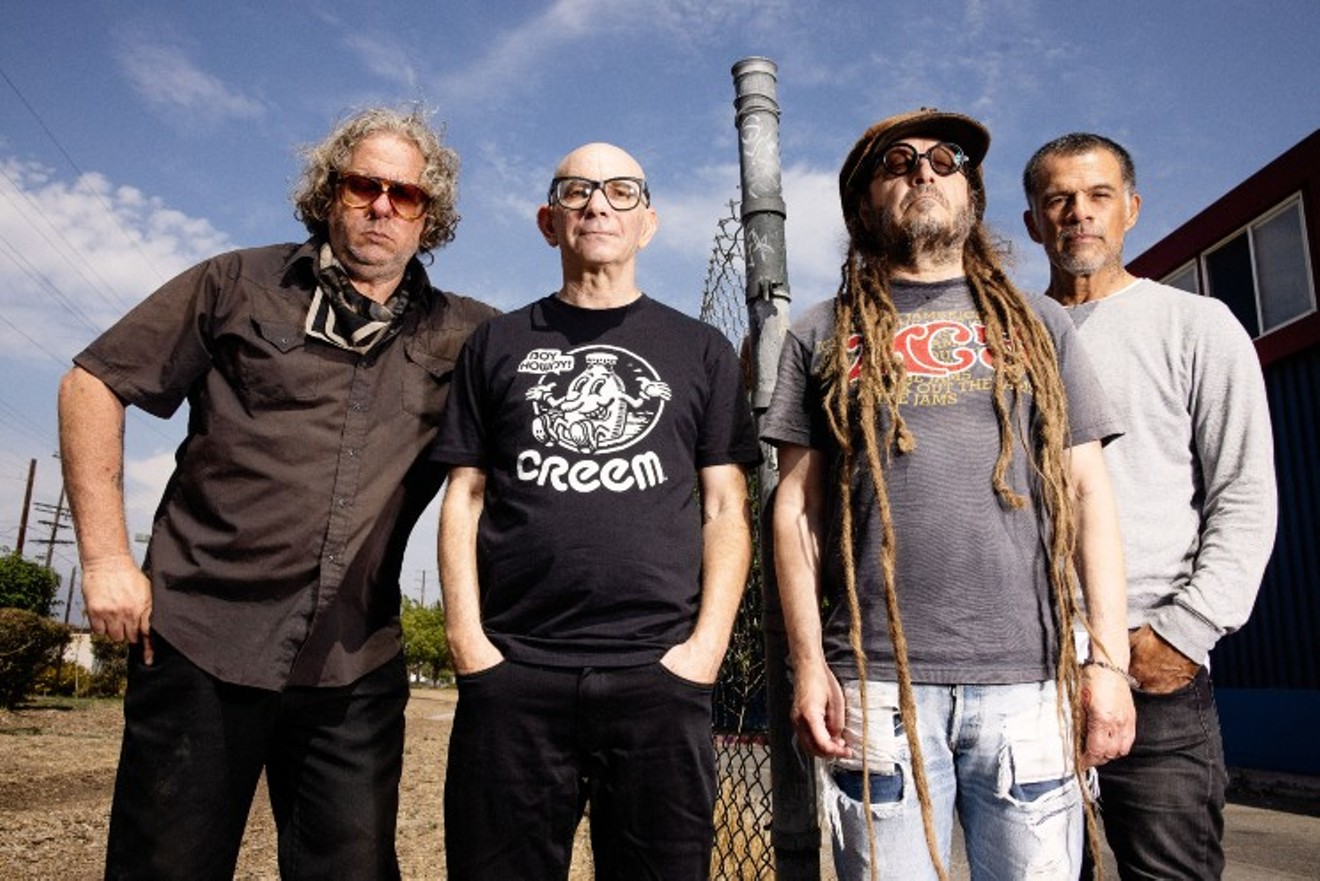 Circle Jerks Photo by Atiba Jefferson, courtesy of Grandstand Media
Keith Morris was relaxing in a Colorado hotel room the morning we caught up with him to discuss Circle Jerks' Saturday September 3 tour date at White Oak Music Hall. A brief chat about the tour, which is celebrating the anniversaries of the band’s iconic debut and sophomore albums, became a window into how songs from those hardcore punk classics were written and recorded.

The White Oak stop will feature tour mates 7 Seconds and Negative Approach, but on the day of our conversation Circle Jerks was preparing for a set in Denver on Punk in Drublic, the touring music and craft beer fest curated by NOFX’s Fat Mike. It felt like a good opportunity to ask about the camaraderie shared by Circle Jerks and a bunch of punk bands they influenced.

“We’ve got T.S.O.L. and the Adolescents, Pennywise, NOFX. It’s gonna be a good one. A lot of fun,” Morris said of that day’s lineup. “Amongst all these bands, we’re the senior citizens. We know all of the guys in all of the bands. We just played a show over in Spain with Pennywise and we have done some touring here in the States with the Adolescents. Greg (Hetson), our guitar player, from all of his touring with Bad Religion, he knows all of those guys. So, it’s kind of like a big bro-fest.

“I know all of these guys so it’s actually very – what’s the word I want to use? Not comfortable. But that’s kind of what it is. Being in surroundings where you’re surrounded by people you know, it just works. It’s just a good thing.”

Morris has said recently he’s spaced Circle Jerks’ tour dates to get a breather here and there because delivering the set is physically taxing. That was the case when the band emerged from Los Angeles in 1979 and it’s still the case today. The present lineup features Morris on vocals, Hetson (also of Redd Kross and Bad Religion) on guitar, bassist Zander Schloss (The Weirdos, Joe Strummer) and drummer Joey Castillo of The Bronx, Queens of the Stone Age and Danzig.

So, it’s an all-star band delivering quintessential songs fans have waited a long time to hear live. This is the first North American tour for Circle Jerks in at least 15 years and Morris wants to give the songs the energy they deserve. His physical regimen for tour includes eating right, hydrating and, when possible, steering clear of airports.


“I’m on European time right now. We got back last Sunday, we spent all day Sunday traveling from Slovenia to Italy to Switzerland to LAX and all of those airports were just horrible experiences. Normally when you’re traveling, you want to have a wherewithal and you want to be polite towards your fellow travelers. All of that got tossed out the window,” he reported. “It was me before you, cut in line before you, go fuck yourselves.

“They would open a door and just let like 50 people enter into a line, just out of the blue. Like, what are you thinking?! There’s a reason there’s a line and I don’t like anybody cutting in front of me,” Morris said. “The train stations over in Europe, the airports, even LAX. LAX was horrible. LAX was terrible, just a terrible experience. You go to all of these beautiful places and it all gets ruined by having to spend three or four hours in an airport.”

It all sounds like a punk song, maybe a new Keith Morris classic, the sort that bubbled up from the discontent with the system that created the seminal bands he’s helmed, Black Flag, Circle Jerks and OFF! The current tour is focusing on 1980’s Group Sex and ‘82’s Wild in the Streets. Those albums are critical to the history of hardcore and paved a path for a diverse swath of bands to follow, including mainstream acts like Red Hot Chili Peppers and Guns N’ Roses.

Because those albums were so instrumental to the genre, we asked Morris if music pundits have picked the bones clean on them. Is there anything meaty left to share about how those records were created?

“The recording itself was really herky-jerky,” he said of Group Sex. The classic features favorites like “Deny Everything,” “Wasted,” “World Up My Ass,” and “Live Fast Die Young.”

“What I mean by that is Greg and I would have to sit next to the phone waiting for the people that worked in the recording studio to call us and say, ‘We’ve got an hour today between seven and eight, so be here and set your gear up and be ready to go,’” he continued. “The reason he and I would sit by the phone is because he had the truck that carted all of the gear around and I had the garage where the gear was stored. There would be days when we would sit and wait and wait and wait – and the call wouldn’t come in. Then, the next day, the call would come in at 10 in the morning. Or the call would come in at five in the evening. Really, there was no set scheduling to it.”


Maybe the practice of jumping when the studio said “frog” gave the songs the urgency and the organic feel they have. The pure, raw emotion of them probably was the result of not overthinking it all, he suggested.

“We’d played those songs. And we practiced them in my garage. You’d been out playing live. Pretty much, we were familiar with the songs. There wasn’t going to be any tricks or turns or detours. It was just get in and bash it out," he said.

“The same thing applied for Wild in the Streets. Our friend Gary Hirstius was managing us and doing our live sound and producing Wild in the Streets,” Morris recalled. “We were working, we were rehearsing every day for four or five hours. When we got into the studio, we weren’t going to be standing around looking at each other, we were just gonna go. Tape’s rolling, let’s go.”

Morris may just be nearing a recovery from his airport woes when he packs his passport again following the Circle Jerks tour. His band, the punk supergroup OFF!, has a new record, Free LSD, releasing in September and a film set to debut in October.

Circle Jerks fans are celebrating 40 years of Wild in the Streets in 2022
Album cover art
“We do start touring in October. Circle Jerks stops touring at the end of September and I’m already starting to panic because OFF! has shows in Spain on the sixth, seventh and eighth of October which gives me absolutely no time to rehearse," he said. "I’m kind of panicked about that. It’ll be what it’s going to be, I’m playing with really, really good guys.”

So, maybe expect a new song railing against the trappings of international travel soon, Keith Morris fans. And expect it to be enduring. After all, the songs from Group Sex and Wild in the Streets are still explosive 40 years later. They still serve as vehicles for generations of listeners to drive their own dissatisfaction with society and politics. There’s a timeliness to them but after all these years, some people still don’t get the music. Does that surprise Morris?

“Not at all. There is a really great explanation for this. The music is not for everybody to understand or like or go out and purchase. It’s angry, it’s aggressive, and a lot of people don’t want to hear that. A lot of people wanna hear the Doobie Brothers or Kanye West or whoever they’re listening to. And that’s all okay. It’s all good. Because music is supposed to move you on certain levels. And a lot of people don’t wanna be moved by what we’re doing. And it’s fine.”

Circle Jerks perform Saturday, September 3 at White Oak Music Hall, 2915 N. Main. With 7 Seconds and Negative Approach. Doors at 7 p.m. for this all ages, standing room only show in White Oak’s downstairs room. $32.50.
KEEP THE HOUSTON PRESS FREE... Since we started the Houston Press, it has been defined as the free, independent voice of Houston, and we'd like to keep it that way. With local media under siege, it's more important than ever for us to rally support behind funding our local journalism. You can help by participating in our "I Support" program, allowing us to keep offering readers access to our incisive coverage of local news, food and culture with no paywalls.
Make a one-time donation today for as little as $1.