Fastball Celebrate Two Decades Since Breakthrough Album and "The Way" 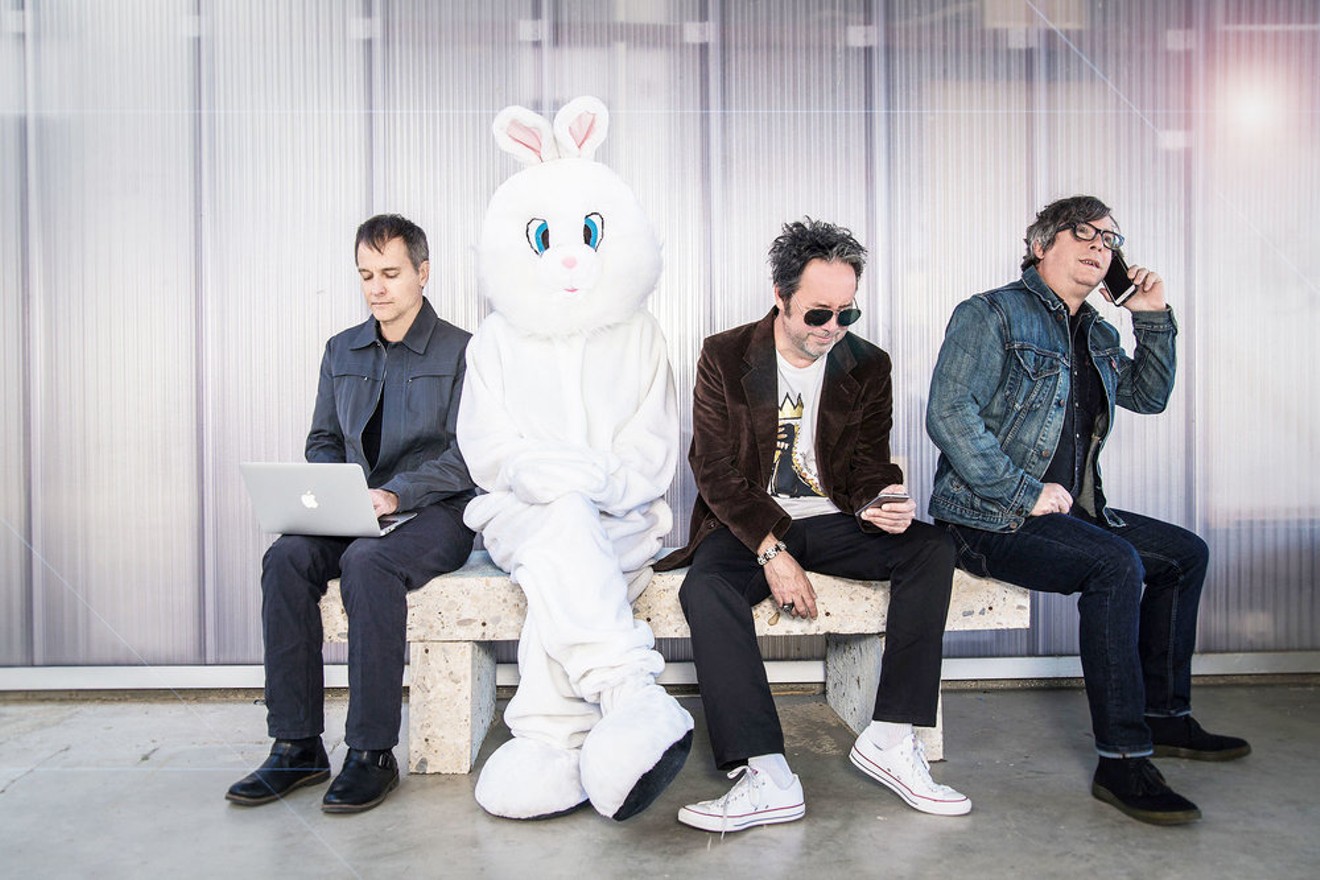 Fastball today, keeping in times with tech: Joey Shuffield, an unidentified friend, Miles Zuniga, and Tony Scalzo Photo by Sandra Dahdah/Courtesy of FastballTheBand.com
The members of Fastball are in a pretty good mood these days. The Austin-based band have just released a 20th anniversary reissue of their breakthrough album All the Pain Money Can Buy that includes the original album’s 13 tracks, plus 9 more rarities, demos, and outtakes.

“We wanted to mark such an important part of our career, really the record that gave us a career. But our manager, Peter Wark, really made it happen,” Zuniga says. “We figured it was going to be a quagmire going to Hollywood Records to get the rights to put this out, and it was! So it was a labor of love for us to really get it together.”

But as the new liner notes explain, there almost was no record at all.

Record cover by Omnivore Recordings
Formed in 1995 with Miles Zuniga (vocals/guitar/keyboards), Tony Scalzo (vocals/bass/keyboards) and Joey Shuffield (drums) with Zuniga and Scalzo splitting songwriting duties, Fastball released the punky, short Make Your Mama Proud the next year. But their Disney-owned Hollywood Records imprint soon descended into internal chaos after its president was fired, acts were getting axed, and the very future and direction of the label were in jeopardy.

Fastball was on the list to be let go as well, but…nobody got actually got around to doing it. So the label’s accountant gave the OK to make a second record, and that was a good choice all around. Buoyed by one massive hit (“The Way”) and two other singles (“Out of My Head,” “ Fire Escape”), All the Pain Money Can Buy went Platinum six months after its release. The band will play locally at the Dosey Doe on December 14.

“Everyone had been fired or was jumping ship and the label was in a period of transition. So there was nobody steering the boat and nobody actually dropped us!” Zuniga says. And as for the record’s title, it was apparently just a phrase from a previous song that producer Julian Raymond had worked on. “It sounded good in the angst-ridden ‘90s. But as for the money part, we didn’t have any!” Zuniga laughs. The material on the record also showed great advancement and musical variation since their debut.

Of course, “The Way” became not only the band’s biggest hit, but their signature song. Sounding like nothing else on the radio at the time, its offbeat intro, bombastic and dramatic sound, and mysterious lyrics (What was “The Way?” Some religious thing?) seemed to be about a hipster/slacker couple who decide to abandon their family in search of eternal youth and partying good times. And the video got heavy play on MTV.

But the real inspiration for Scalzo’s words were much darker. “The Way” was directly inspired by a newspaper article he read on the 1997 disappearance of Lela and Raymond Howard. The husband and wife from Salado, Texas were both in their eighties, but had been married for just a year. The couple had set off to attend a fiddle festival in Temple, just 15 miles away. Both were found dead in their car two weeks later in a pile of brush off the road in Hot Springs, Arkansas – some 350 miles from their home. Raymond had recently had brain surgery, and Lela was showing signs of memory loss.


“The Way” reached No. 5 on the Billboard Hot 100 and No. 1 on the Modern Rock chart, and remains their best known number. “The song is definitely bigger than the band, and it’s the reason I’m talking to you now. So I don’t have any downsides to that,” Zuniga says. “It’s given us a career we didn’t have and it changed everything. It was real alchemy and completely organic from start to finish and none of us thought it was a single. But it just blew up.”

Though the song was written and sung by Scalzo, he and Zuniga had a major conflict over the arrangement and how the song should sound. And indeed, the cassette demo included on the reissue’s bonus tracks shows a more low-key version with some Spanish guitar. In the end, the final release was something of a combination of their two visions.

“We had a lot of arguments about how to do the song. But it was worth arguing for because we all drew out all this artistic wrestling, and something greater came out of it,” Zuniga recalls. “It was the first song on the record not because we thought it would be the single – we didn’t know it was going to be at the time – but it was the only way to start the record with that big long, interesting introduction. I don’t know how we did that song, but after it was a hit, everybody said ‘Well, do that again.’ And you can’t.” Fastball at the height of their success with "The Way" in 1998: Joey Shuffield, Miles Zuniga, and Tony Scalzo
Photo by Howard Rosenberg/Courtesy of Omnivore Recordings
Ultimately, Fastball were not able to repeat the commercial success of their big record, something that was also a challenge to their rock/pop contemporaries like the Gin Blossoms, the Wallflowers, Cracker, Smash Mouth, and the Goo Goo Dolls. Though they have put out four more albums (including last year’s Step Into Light) as well as members’ solo and side projects.

Zuniga says that he felt Step Into Light was a “reset” album for Fastball, going back to their simpler, fast-paced roots. “It was like, let’s get back to what we do best. We hadn’t put out a record in a long time. We wanted it to have no fat at all. No guitar solos or just keep them short. It was sort of touching home plate again.”

A new and more experimental Fastball record, tentatively titled The Help Machine, should be out this summer. Not that Zuniga or the band are expecting to hit the charts again.

“All the money today is coming from touring, but it’s incredibly cynical and self-defeatist to say ‘No one’s buying records, so I won’t make them.’ I mean, isn’t that why you started making music in the first place?” he says. “I’m an artist, and I’ll keep creating. If I won the lottery tomorrow, I wouldn’t retire, I’d still be writing and recording music. It’s not the process, it’s the destination. Who knows? You might put something out, it doesn’t sell. And then Adele hears it and covers it and it’s a huge success!”

Asked how having the same three guys in the lineup for the entirety of the band’s career has affected their chemistry – or would change if even one of them were gone – Zuniga is surprisingly honest.

“It’s strange. I know if I or Tony wasn’t in the band, it wouldn’t be Fastball because there’s two voices. But we’ve done shows from time to time without Joey. And without him, it doesn’t sound like us,” he says.

“There is a weird inner tension in the band that we’ve come to appreciate now that we’ve become better friends. Joey and I were in a band called Big Car before. Then Tony came in. He’s kind of the third wheel, but not really. And he’s an amazing creative force. At this point, it’s like family. And I think about how lucky I am to be part of this family and that it’s still here.” 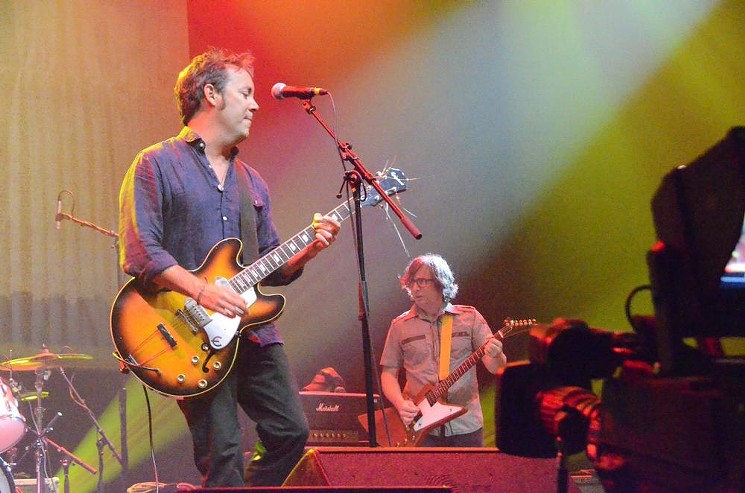 Miles Zuniga and Tony Scalzo live in Austin, 2014
Photo by C. Parker/Courtesy of FastballTheBand.com
Finally, since Houston is just down the road from their home base, Zuniga can easily rattle off the names of clubs they’ve played locally in the past like Rudyard’s, Fitzgerald’s, and the Satellite Lounge. And he says that their H-Town highlight was playing on New Year’s Eve where Chuck Berry graced another one of the event’s multiple stages. And he’s got some other thoughts about the city.

“Houston has always been this mysterious place. The zoning’s all weird, and you have to be in the know to where the cool things are,” he says. “It’s never been easy to navigate. We’ve had a long history going to Houston and arguing about what’s the best way to get there. Do you go 290? Do you go 71?”

Wait, so does that mean that the band that performed “The Way” that questioned the directionally-challenged…actually had a hard time finding “the way” to Houston??

Or, perhaps, maybe the closing.

For more information on Fastball, visit FastballTheBand.com
KEEP THE HOUSTON PRESS FREE... Since we started the Houston Press, it has been defined as the free, independent voice of Houston, and we'd like to keep it that way. With local media under siege, it's more important than ever for us to rally support behind funding our local journalism. You can help by participating in our "I Support" program, allowing us to keep offering readers access to our incisive coverage of local news, food and culture with no paywalls.
Make a one-time donation today for as little as $1.