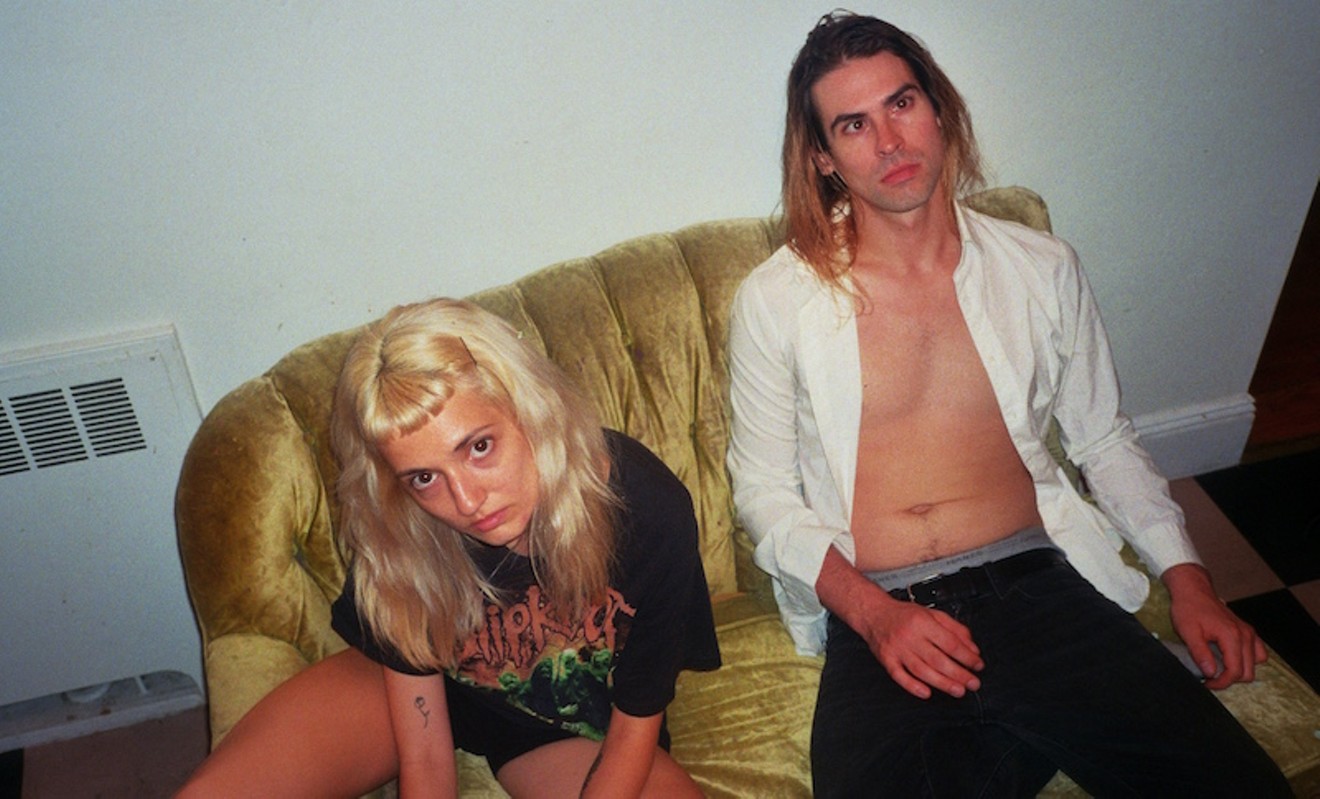 New York based duo, LEYA will perform at Rudyard's Saturday March 14. Photo By Serge Serum
Update 3:30 p.m. 3-13-20: The LEYA show has been postponed to an unknown future time.

With the decision to cancel SXSW, bands from all over the world and venues in Austin are trying to fill in the gaps and make due with the current situation they find themselves in. One of those bands is New York-based experimental duo, LEYA who had been accepted as an official SXSW artist this year.

The duo consists of Houstonian, Marilu Donovan on vocals and harp and Adam Markiewicz on violin and vocals. The show must go on and the duo will continue their tour including a stop at Rudyards on Saturday, March 14.

“We love Texas,” says Markiewicz. “I feel like us and a million other bands are scrambling to do whatever they can. We're going to do that and figure it out,” he adds.

LEYA’s sound is unlike any other. Donovan and Markiewicz combine their classical training and love of pop music to create haunting and strange sounds that transport the listener to another time, be it the past or the future.

“The concept of the whole thing was I think really beautiful and it's definitely the kind of thing that was a new kind of experience for us,” says Markiewicz. “I don't think we even knew quite what to expect but it ended up being this very positive and friendly great experience.”

The film and the music are not what anyone would think of when envisioning a pornographic film. It features queer, transgender, gay and lesbian love, leaving behind the cheap aesthetic associated with most pornographic material.  LEYA adds another layer to Candy’s artistic vision, set peripherally as almost statues playing their classical instruments while lovers off all marginal groups express their physical love for one another.

On the heels of their debut album, The Fool, LEYA took three songs from the soundtrack and re-imagined them during months of writing and traveling together. They added new material to their collection and on March 6 released their second album, Flood Dream.

Flood Dream invites listeners to float away into space all while tethered to earth and free of the fear of drifting off indefinitely. The beautiful combination of their harmonies and approach to the music fills the mind with images lead by the subconscious of the listener.

Donovan and Markiewicz have a powerful magnetism to each other that is evident in their collaborations. They manage to create in a realm with no limits and endless depth yet free from the sometimes pretentious air that experimental music can give off.

“It ends up boiling down to something that we hope is kind of simple,” says Markiewicz. “It is meant to really just exist as a song that somebody can connect to, enjoy and hopefully have an emotive or cathartic response.”

“We’re just trying to make it simple and easy to access and meaningful in that sense, beyond being a composition or an art piece or something that's so ultimately alienating to many people,” he says.

LEYA released the video for their single “Wave” featuring two trained fighters and disciples in Shaolin Kung Fu. The result is a stunning visual of violence represented in a dance like sequence set to the backdrop of the eerie song and melodic vocals.

“I wanted to portray something beautiful but it's like a beautiful struggle,” says Donovan of their vision. “It’s kind of where we are in the world, you have to find beauty in what's in front of your eyes and also, it’s one of my favorite songs on the record.”

"You have to find beauty in what's in front of your eyes."


Donovan and Markiewicz are both classically trained musicians  and are aware of the otherworldly sound they can create but choose to stay planted in the now. Both artists experienced the insanely competitive nature of classical music and made a conscious decision to take another road artistically.

“We both grew up playing these instruments, we both like pop music and we’re writing songs on our instruments and that's kind of the easiest way to describe it,” says Donovan. “I wouldn't describe it as some compositional classical masterpiece or something.”

The duo says that they strive to cover a variety of music when on tour and enjoy being billed with diverse bands. In Houston they will be sharing the evening with Houston’s Tee Vee and Vockah Redo, both equally one of a kind artists but with a completely different sound than LEYA.

“The Houston gig is almost the epitome of the type of gigs that we want to do,” says Markiewicz.
“It’s covering different genres that I hope will be really fun. Houston has always been a highlight for us, we love Houston but that gig, I'm definitely pumped for it.”

LEYA will perform with Tee Vee and Vockah Redu on Saturday, March 14 at Rudyard's 2010 Waugh, doors at 8 p.m, $10
KEEP THE HOUSTON PRESS FREE... Since we started the Houston Press, it has been defined as the free, independent voice of Houston, and we'd like to keep it that way. With local media under siege, it's more important than ever for us to rally support behind funding our local journalism. You can help by participating in our "I Support" program, allowing us to keep offering readers access to our incisive coverage of local news, food and culture with no paywalls.
Make a one-time donation today for as little as $1.