John McCutcheon Takes a Leap of Faith and Folk Music 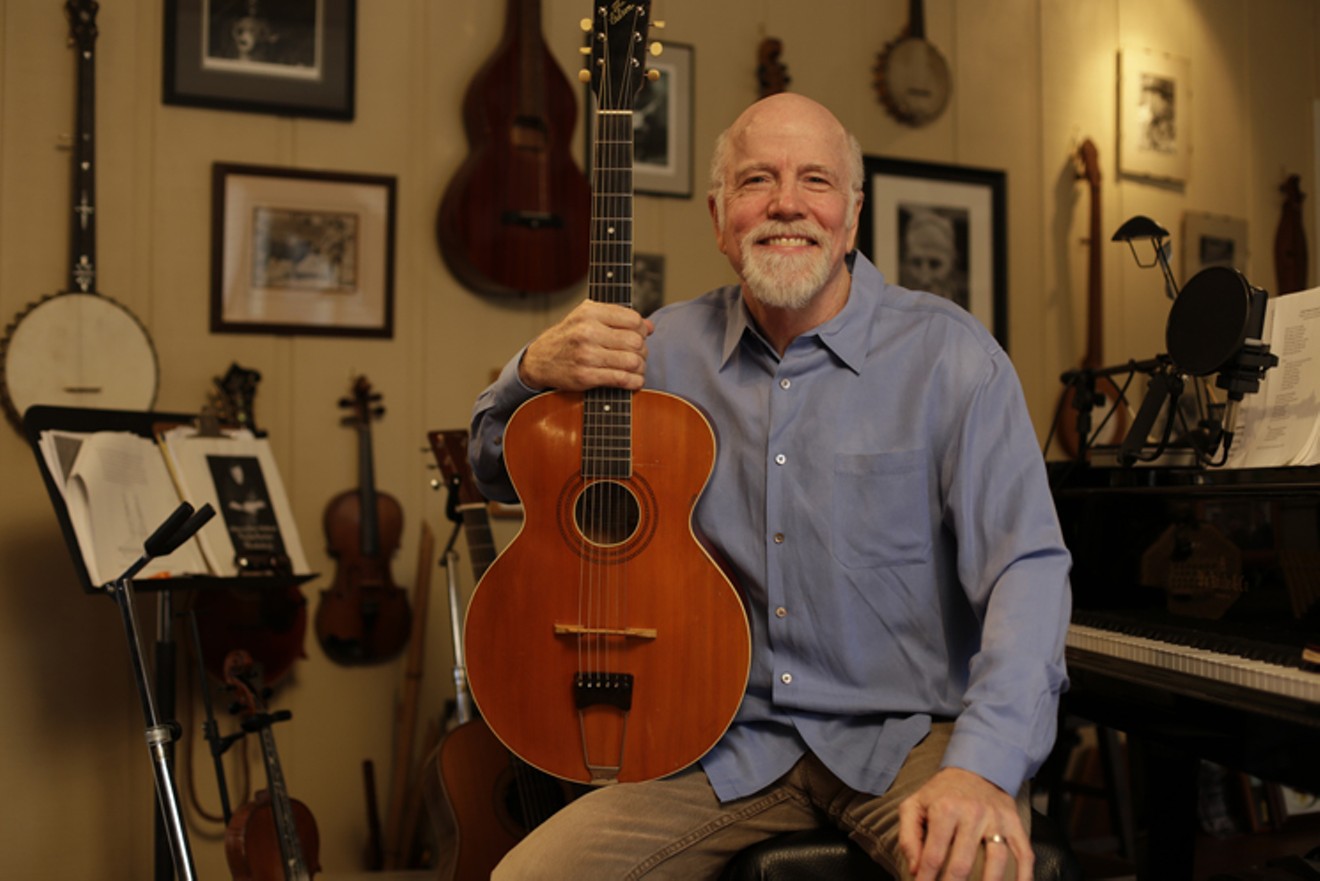 John McCutcheon in the music room at his home. Photo by Eric Petersen
While a student at Minnesota’s St. John’s University in the early 1970s, John McCutcheon had a pretty good system going. He had a friend who worked in the school library and who could be persuaded to order certain requested records in exchange for beer. Records that McCutcheon could then borrow, listen to endlessly and study. 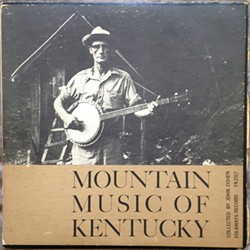 Record cover.
Unfortunately, the budding folk singer and banjo player could never quite seem to return those records on time, and eventually wracked up enough late fees to put an end to his borrowing privileges. But he really wanted to hear the compilation Mountain Music of Kentucky on Folkways Records. So, he stole it.

Among the cuts were several by Kentucky banjo player Roscoe Holcomb, whose stern picture graced the cover. McCutcheon was enthralled by the performances and the biographical information, which included a map. Two weeks later, the just-turned-20-year-old was sitting in Holcomb’s living room in Daisy, Kentucky as the pair picked together on old Appalachian bluegrass and folk songs.

“I showed up at his house with absolutely no preconceived notion of what I was getting info. What was out there in the world about that part of the country? Li’l Abner and the Beverly Hillbillies and Deliverance. Demeaning stereotypes of rural and especially Appalachian people,” McCutcheon says today. “I believed the mythology that this music was dying out, and I wanted to hear it firsthand. And I was open to the experience.”

It took McCutcheon three days to hitchhike to Holcomb’s house, with a few stops along the way. Carrying only a backpack and a banjo, he says he never had to wait more than a couple of minutes on the side of the for road because having a banjo in that part of the country was “like having a free bus pass” in terms of securing transportation.

Meeting one player would lead to another and another, and McCutcheon got to attend plenty of church services, living room parties, and family suppers. And he got better and better at playing and began to write more. Eventually, after two years of this, his Independent Study Advisor at St. John’s told him it was, um, really time to graduate. As long as he came back and gave a recital showcasing what he’d learned. 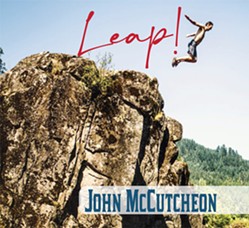 Record cover.
It’s the exact kind of out-of-the-box life decision that a half a century later John McCutcheon is celebrating on his 43rd album, Leap! (Appalseed Records) and is reflected in both the title and leadoff track “The Ride.”

Of the record’s 18 songs clocking in at nearly 70 minutes, all but one was written during the pandemic as McCutcheon and his wife—the writer Carmen Agra Deedy—quarantined in their North Georgia cabin.

“Well…I’ve had more time than usual, being free of the steady routine of going to the airport every weekend and then soundchecks and concerts and post-game gatherings! I didn’t know how long it would last, so I decided I’d just sit down and write!” McCutcheon laughs. “And once the faucet was turned on, it didn’t stop. And it hasn’t. I’m co-writing some things now with Tom Paxton [via Zoom] as soon as you and I are done talking!”

McCutcheon firmly believes that the pandemic era has forced a lot of people to really assess their lives, think about how they’ve been living, and really file down to figuring what they need to live with and what they can live without. He thinks that it’s also caused human behavior to go to extremes.

“I talk to friends who are waitresses, and they say people are either tipping extra well or being complete assholes! And then there’s those who are [at a computer] going down weird fucking rabbit holes,” he says.
“The thing about [Leap!] is the notion that you make a decision. To, say, jump off the ledge into the pond. And you’re not going to know if that decision was good or not until you hit the water,” he continues. “It’s the interval in between that can determine that. As the lyrics say, you’ve already expended all the courage it took to jump in the first place. There’s no point in being scared from that point on.”

On the record, McCutcheon plays guitar and autoharp, but he’s also very proficient on a variety of other instruments including banjo, fiddle, Jew’s harp, piano and the hammered dulcimer.

Subject on Leap! range from serious takes and reflections on current social/political issues and history (“The Troubles,” “Sorry Land,” “Nobody Knows,” “Second Hand,” “The First Ones”), character studies (“Fuller Brush,” “Touched,” “Listen,” “Work”), literary references (“Shadowland,” “Mistaken”), and even a wry and on-the-nose tribute to the recently-deceased singer/songwriter John Prine (“The Song When You Are Dead”).

McCutcheon has also penned "The Night John Prine Died." And 1984's "Christmas in the Trenches" about the 1914 Christmas Truce between the British and German lines on the Western Front was named by Kent State University's Folk Alley as one of the "100 Most Essential Folk Songs" (coming in at No. 70). He recently collaborated with Paxton on a song abut the Ukraine War.
But perhaps the most attention-grabbing tune is “The Third Way.” It’s based on a true story that happened to McCutcheon’s late father-in-law Carlos Agra. Agra was a native of Cuba who in 1964 found himself reporting for his first day of work at steel mill in Georgia, and not able to utter a word of English.

Having nervously drank a full thermos of Cuban coffee on his first day of work, Agra soon felt the inevitable bladder pressure. After “a few graphic gestures,” a Black co-worker took him the mill’s restrooms. One door says “White” and the other “Colored.” Confused and feeling that he didn’t really fall into either category, Agra did what he thought was right—and promptly went outside to piss in the woods.

It was a story that Agra would tell for decades and never failed to elicit a laugh from either himself or his listeners. And McCutcheon's point is amplified on his lyrics: "If you’re told you have two options/No matter what they say/It’s best to understand/There’s often a third way."
“He was a great man and wonderful storyteller with a great sense of humor. He came from rural Cuba, taught himself to read at 14, taught himself math and became an accountant for the biggest union in Cuba.” McCutcheon says.

Circling back to his early years and connecting them to now, he sees is as part of one timeline. ““Bob, it was all these little cogs lined up at exactly the right time that got me into this,” he says. “I met dozens of people and heard hundreds of songs because music is a community activity. Banjo players hang out with fiddle players who hang out with mandolin and guitar player and singers. And they’ve all got stories to tell.”

As for Houston stories, McCutcheon fondly remembers playing shows at Anderson Fair and Rockefeller’s, and for the Houston Folklore and Folk Music Society at the invitation of Bob and Gay Pangle.

Two other storytellers that McCutcheon crossed paths along the with were the late Texas singer/songwriters Townes Van Zandt and Guy Clark, usually found hanging out together. McCutcheon playfully curses Clark for introducing him to the sport of golf, which dominated his attention for a five-year-period. And he remembers one sage observation from Van Zandt.

“I remember I ran into Guy and Townes at a bar—imagine that!—at a festival in Canada probably in the early ‘80s. Guy waved me over. I hadn’t spent much time with Townes, but we were there for a couple of hours,” McCutcheon recalls. “At one point, Townes just put his arm around me at the bar and said ‘John! I’m a great songwriter and a terrible role model! Remember that!’”

For more on Leap! and John McCutcheon, visit FolkMusic.com
KEEP THE HOUSTON PRESS FREE... Since we started the Houston Press, it has been defined as the free, independent voice of Houston, and we'd like to keep it that way. With local media under siege, it's more important than ever for us to rally support behind funding our local journalism. You can help by participating in our "I Support" program, allowing us to keep offering readers access to our incisive coverage of local news, food and culture with no paywalls.
Make a one-time donation today for as little as $1.