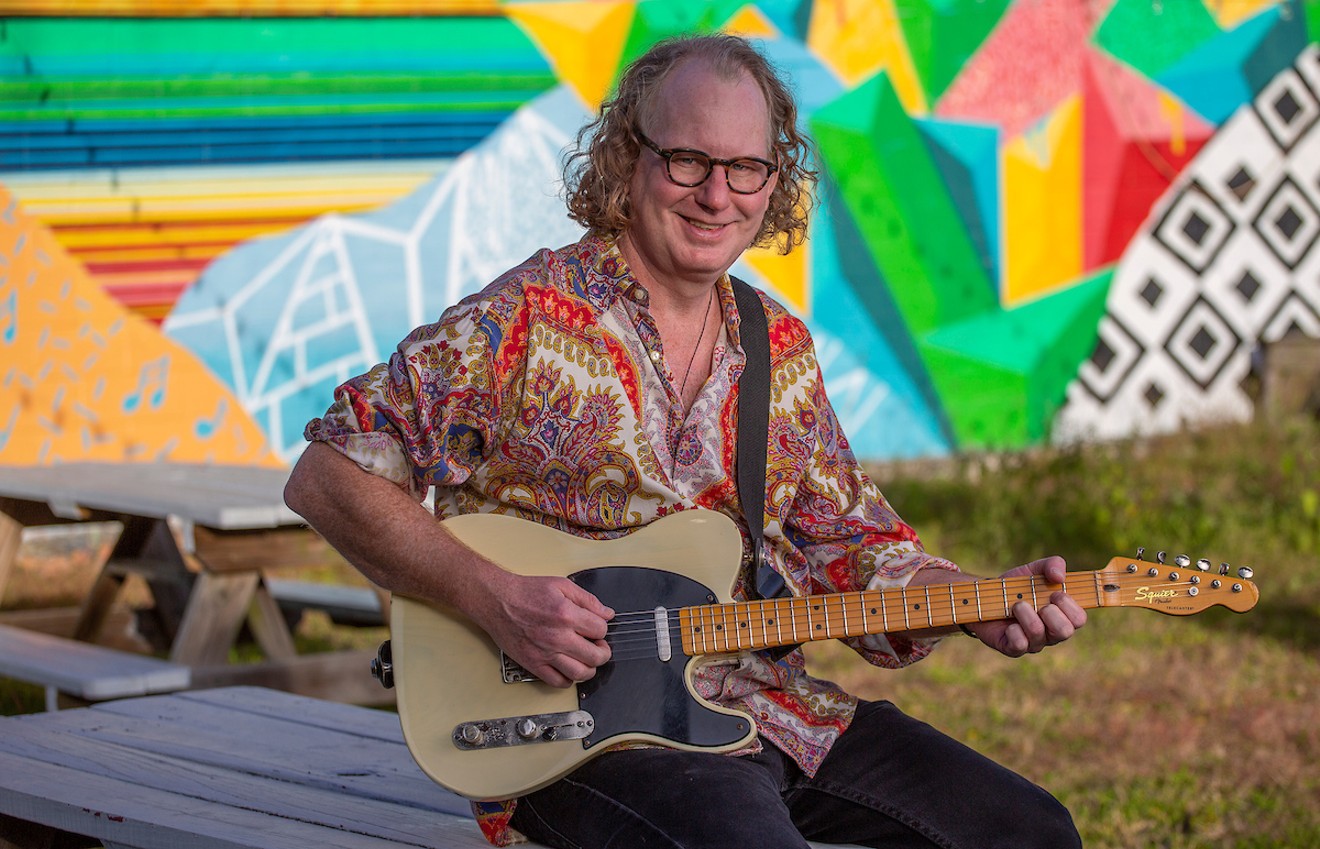 Yes, indeedy, he's in love again: Allen Hill on rock and romance. Photo by Thomas Shea/Courtesy of Allen Hill
Allen Hill has long been a staple and stalwart of the Houston live music scene, and a charter member of the Continental Club Mafia. That group of players known for switching among multiple (often cover) bands, and whose performance base is at the Midtown venue.

However, Hill has begun stretching out into more original music, beginning with 2019’s full length All Over the Map. The songs showcased his usual buoyant music with a dash of humor, but some tracks dealt frankly with the tougher side of romance. But after a divorce that brought a lot of emotional trauma (and was reflected on some of the album’s songs), Allen Hill has found love again.

Pravda Records cover
It's a fact that he wants to share with everyone, as makes very obvious in his new upbeat, power-pop drenched single "Yeah, Yeah, Yeah!” In it, he extols the virtues of being in a new and solid relationship. So confident and bristling with enthusiasm, that he name checks his girlfriend, Windy, (who fans of the '60s pop group The Association will cherish) throughout the tune. And he lays it all out there.

“Walk with me and check out the scene/Livin’ with you tops my wildest dream/Cook up some magic and more fun/Our life together has just begun,” Hill sings. And then “Watch the sun rise from the sky/I know I’m such a lucky guy/Free at last to feel this true/Windy I’m so in love with you.”

When jokingly asked why his lyrics are so obtuse and coded, Hill lets out a laugh. “Well, sometimes, ya just gotta come out and say it!” He says that the tune started talking shape during recordings early in the pandemic, which also yielded his last single, “I Miss You” (a paean to friends and events he couldn’t be around due to quarantine).

“We had [drummer] Eric C. Hughes in one room and Paul Beebe playing bass in the control room in July, then masked up for listening back things at Beebe Gunn Studios. The music definitely evolved, then the lyrics came to me. But there were way too many chords in it, and I put it away," says Hill, who handled vocals and guitar.  Over a morning cup of coffee a couple of months later, he sat down and simplified the tune. “It was great to write from a place of joy and happiness.”

The band lineup for their recent May 7 gig included Hill (lead vocals/guitar), Hughes, Jim Henkel (keyboards, guitar) and Mark Riddell (bass), playing their first gig in over a year on the backyard outdoor stage at the Continental Club where audience masks were required (well, at least initially), and socially-distant tables held a capacity of 80 people.

“It was amazing and really the magic of live music coming around again. The right venue, right band, and right audience really creates something. The energy between the band and then between the band and the audience was great,” Hill says. “The entire vibe was ‘Wow, this is really happening!’ It was almost magic to have everyone connected through the music.”


The pandemic not only affected Hill as a performer, though. As the head of Allen Hill Entertainment, he’s the booking agent for scores of local and regional bands and performers from a vast array of musical styles. They’re mostly booked at events like weddings, festivals, private parties, and corporate functions. None of which were happening in 2020-21.

It was a huge economic hit for both Hill and his performers, and he found himself taking unemployment benefits for the first time in his life. And he lived “musician cheap” complete with nights where dinner was “beans and rice instead of lobster.” He and Windy (who also works in the music business), holed up in their digs literally just across the tracks from the Continental Club, spent a lot of evenings playing cards and dominoes and, of course, listening to music.

The front cover of “Yeah, Yeah, Yeah!” shows the song title spelled out in familiar tiles on a Scrabble board. It’s a nod to another game that got a lot of usage from the Allen and Windy during the pandemic. And in fact, was actually the game the couple played on their first date.

But back to the pandemic and his business. “It was brutal. The People Congregating Business was out of favor for a long, long time, whether it was sporting events or musical theater or movies and of course, live music. Early on, a lot of people just [postponed] to the next year, but that’s not always definite,” Hills says. He notes that a black humored joke began circulating among his fellow booking agents that went like this: When one agent asks “How’s business?” the second responds “Great! I’m almost out of contracts to cancel!”

And while he’s trying to plan ahead, there’s still a lot of uncertainty, especially since many of his events are booked many months in advance. He’s starting to see some activity for the fall, but doesn’t expect things to be back to “normal” until 2022, when he feels the pent up demand for live music and fun will come roaring back.


In regards to “Yeah, Yeah, Yeah!” Hill sees himself releasing more singles in this manner, and notes in some ways it comes “full circle” back to the time of the oldies era where 45s ruled the release chart.

“I could spread it thick on one song rather than thin over multiple ones,” he says. “I’m very grateful how All Over the Map was well received by folks who didn’t think it was weird coming from the Allen Oldies Band, especially on the deeper tunes,” Hill says. There’s also an accompanying video that features artwork from Robin Whalan, co-owner (with Robin Berwick) of Double Trouble Caffeine and Cocktails, featuring puppets of Allen and Windy.

“But I gained confidence in creating new music as a solo artist. And during the pandemic, there was a lot of time to go through a lot of stuff. Everyone’s coming out of the fog now, and being around people is a huge source of energy for me. And as long as I have more steps forward than steps back, I feel really good about things.”

Finally, the very title “Yeah, Yeah, Yeah!” immediately brings to mind a certain mop-topped group of Liverpudlians who emerged 55+ years ago. So did Hill think people might take the title as meaning the song was some sort of tribute to the band?

“I didn’t really think about that. The [phrase] ‘yeah, yeah, yeah’ was really a placeholder until I could put in something different. But as the rest of the verses started fleshing out, it really [conveyed] what I was trying to say. I’m just really excited," he says. "And why say it once when you can say it thrice?”

To purchase or stream "Yeah, Yeah, Yeah!" visit here.
KEEP THE HOUSTON PRESS FREE... Since we started the Houston Press, it has been defined as the free, independent voice of Houston, and we'd like to keep it that way. With local media under siege, it's more important than ever for us to rally support behind funding our local journalism. You can help by participating in our "I Support" program, allowing us to keep offering readers access to our incisive coverage of local news, food and culture with no paywalls.
Make a one-time donation today for as little as $1.