A Trip to the Zoo with Purity Ring's Megan James

Purity Ring Photo by Carson Davis Brown, courtesy of Grandstand Media
Our chat with Megan James, vocalist and lyricist for the electronic synth-pop duo Purity Ring, felt a little like a trip to the zoo. We asked James to consider a quartet of creatures — elephant, giraffe, camel and rhinoceros. These are some of the planet’s animals with the longest gestation periods. We mention these wonderful wild things because the band, which brings its "tour de womb" to White Oak Music Hall on July 14, recently released a song which took eight years to develop.

As Purity Ring fans know, James possesses not only an ethereal voice, but the heart of a poet, so she seemed giddy at the notion that “graves,” the song in question from Purity Ring’s recently released EP of the same name, might have something in common with these majestic beasts.

“Hmm. I think it’d be the camel because it holds water,” she said. The question rolled in her mind and she asked, “Elephants, they store water in their trunks, right?”

We admit we’re not sure. Maybe we should have paid better attention in science class.

“I feel like the desert and the sort of strange appearance of a camel and maybe the longevity,” James added to reasons “graves” might be dromedarian. Like a camel, the band is emerging from a barren tour landscape, carrying its own thirst-quenching wellspring to fans for the first time in several years.

Tour kicked off at the end of May and will run through the end of July. Everyone’s focused on the recent challenges of touring, so we asked James to consider some aspect of it which seems easy or familiar.

“Tour is harder now than it ever was because of the COVID stuff and scarier. If we’re in a city where not many people wear masks I get real stressed and terrified,” James admitted. “I always say the easiest thing about tour is playing shows. Once it’s that time and you get up there it feels kind of like home.”

The band toured in 2017 a bit but James said “I don’t really count it because that was such a strange tour.” She said it’s been more like six or seven years since Purity Ring did a proper tour run and James confessed the FOMO was bubbling and brewing all that time.

“For a long time when I went to shows during that period I would be so jealous of the people on stage because I love performing, I wanted to do it so badly,” she said. “So it feels amazing. I love being on stage, I love people singing the words and seeing all these fans, we have really sweet fans, we’re very lucky.”

Fans have new Purity Ring music to enjoy. The graves EP released the first week of June. It’s the debut release for The Fellowship, the label James and Corin Roddick, Purity Ring’s multi-instrumentalist and producer, formed. Because there’s such depth of sounds pulling from many genres in the duo’s music, we wonder what types of acts they might one day want under The Fellowship’s banner. It’s intriguing to think where the label could go in that respect, but James said it’s not a current priority.

“Everyone asks about that. Because we started this label, I think there’s a general assumption we’re going to put music out like labels do, but ultimately, in order to release music independently, you have to have a label for distribution. If you want to do this independently, you’ve got to start a label. So, what do you wanna call it? That was straight up how it went,” James said.

James said it’s not a stretch for her and Roddick to work as an independent label since they hail from a very D.I.Y. scene in Edmonton, Alberta, Canada. They come from a community of tape labels where friends and fellow artists still release new music on tape.

“When Purity Ring started picking up — and you know, we were releasing the songs independently at the beginning too — it was always a question of of course we want to release independently. That’s how we think about music. Labels weren’t really a part of our idea of releasing music at the time.”

They did sign on with the 4AD label and released a trio of acclaimed albums, a time James describes as "exciting." She said “now we can release independently and we can actually do it because it’s established, which is actually amazing.”

Doing it independently allows them certain freedoms of course, like allowing a single song to germinate for nearly a decade. We return to the notion, mentioning fellow Canadian Leonard Cohen’s masterwork, “Hallelujah,” and the many years of rewrites it took to become its final self. We mentioned how Cohen once had 80 verses to the song and James was ahead of us.

“Yeah, he did that and whittled it down,” she said knowingly. She also knew other artists like John Cale and Jeff Buckley helped fashion the song. We asked if Purity Ring called on fellow musicians to help develop “graves.” 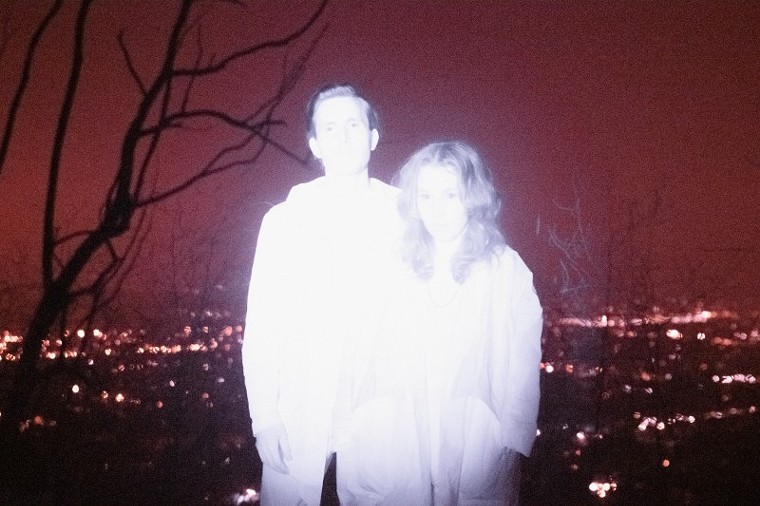 Photo by Carson Davis Brown, courtesy of Grandstand Media
“We both would sort of show people what we were working on sort of but not necessarily like, ‘What do we do with this?’ I think Corin showed one friend and it had been five years and she said, ‘Five years? Dude, you gotta put that shit out.’ We still weren’t ready. It wasn’t time yet.”

“I dream of being as well-written as Leonard Cohen, musically and poetically,” James said. “When I make something my intention with it is it has longevity in it and feel like it should exist or is deserving to exist.”

We note there is a timeless feel to our favorite Purity Ring songs, tracks like “Lofticries” and their breakthrough song “Ungirthed.” The poetry in them nudges Purity Ring near Cohen territory, we suggest. James seems amused by the complement.

“When I say that it feels like an unachievable goal," she said of reaching Cohen status as a songwriter.

Like Cohen, James and Roddick are artists, creatives filling the world with their work for listeners to contemplate and enjoy. Because the songs are so smart and engaging, it might be easy to forget that every artist is a person, someone just like the rest of us. So, we ask James what Purity Ring enjoys when it’s not bringing to life its artistic vision.

“On tour that’s different than when we’re at home, of course,” James began. “It’s funny how much someone can understand about a person just on a song or a group of songs they’ve written and it’s funny how little is understood as well. A lot of people are right, I think, to believe a lot of things about Corin and I based on what they hear in a song or understand about something we’ve made.

“For me, music is one of the many things I love to make. I’m obsessed with fabric and textures and doing things with my hands. That’s a very big part of my life,” James continued. “Also, that plays into making music.”

She mentioned 2020’s WOMB as an album which has texture and feels “like a thing I can touch with my fingers.”

“I brought a guitar on tour,” she said, getting back to the road and its path towards Houston. “We’re always on the hunt for coffee and natural wine. Corin is really into rock climbing. I spontaneously brought a folding bike, which I’ve always wanted, on tour. I’ve been doing a lot of relaxation things. I meditate a lot so the songs can flow.”

Songs that flow, like refreshing, cool water carried by a camel to those who crave it.