When Radney Foster Lost One Voice and Gained Another

Radney Foster’s career as a country singer-songwriter stretches back to the 1980s. Over the years, he’s spent plenty of time in tour buses and vans, day after day of travel time that idled away without the distraction of a smartphone or an iPad. As he recently noted, “Two hundred and seventeen nights in one year with a band in a bus will either make you a real reader or crazy…maybe a little of both.”

So, music helped Foster become a reader which has in turn helped him evolve into a fiction writer. Last year, he released his literary debut, a collection of short stories titled For You To See The Stars. He’ll be in Houston this week to showcase the book and the album of the same title which complements it. He's also bringing an old friend along for one of two shows he’s slated for the area.

Saturday night, Foster plays McGonigel’s Mucky Duck. He’ll be joined by Darden Smith, a longtime acquaintance who has written songs with Foster in the past. Smith too has a new book out, The Habit of Noticing: Using Creativity to Make a Life (and a Living), so teaming for a unique night of entertainment seemed like a natural fit.

“We met in 1987 or ‘88 here in Texas when I was in Foster & Lloyd and he had just gotten signed to Columbia Records, so we’ve known each other a long, long time and I think we started writing songs together probably 25 years ago,” Foster said of Smith.

Foster’s got an additional engagement at Main Street Crossing on April 18, something more in the traditional vein of Radney Foster shows. Tomorrow’s event is a chance to hear two Texas storytellers reflect on how they developed into literary forces from their music-based backgrounds.

In Foster’s case, prose writing was an exercise that salved some specific anxiety he was feeling.

“I walked into it without a whole lot of fear because I was so filled with fear because of other circumstances in my life,” he said.


In the winter of 2016, Foster was diagnosed with pneumonia and a crippling case of laryngitis, one which robbed him of his voice completely for six weeks. As those ailments slowly abated, doctors ordered vocal therapy, which meant an additional six weeks without singing. For Foster, it meant being sidelined from performing for several months.

“It wasn’t like they just said, ‘Okay, you’ll shut up for this six weeks and then do these six weeks of vocal therapy, then you can go back to work,” he noted. There was real trepidation whether he'd have a full recovery.

Foster had written some prose before, a column for Acoustic Guitar Magazine in the 1990s and a few guest articles in publications. Plus, he’d read all those books on all those trips from gig to gig.

“I wasn’t afraid of that part, the storytelling aspect,” he said, but he did pause when he remembered, “Oh, I’m about to hand this to my wife, who was a magazine editor for 12 years and a professional journalist for the last 25.”

She told him what she read was good and encouraged him to find an editor. He met Shari Smith, his publisher, a respected author and non-fiction essayist out of North Carolina, and she helped him hone his literary work.
Smith read one of his stories, “Bridge Club,” reached page three, paragraph four and proclaimed, “Radney, that’s the prettiest paragraph that ever I’ve read off of any page,” which prompted him to reply, “Yeah, but you can’t say that. That scares the hell out of me because I know who you’ve read.” 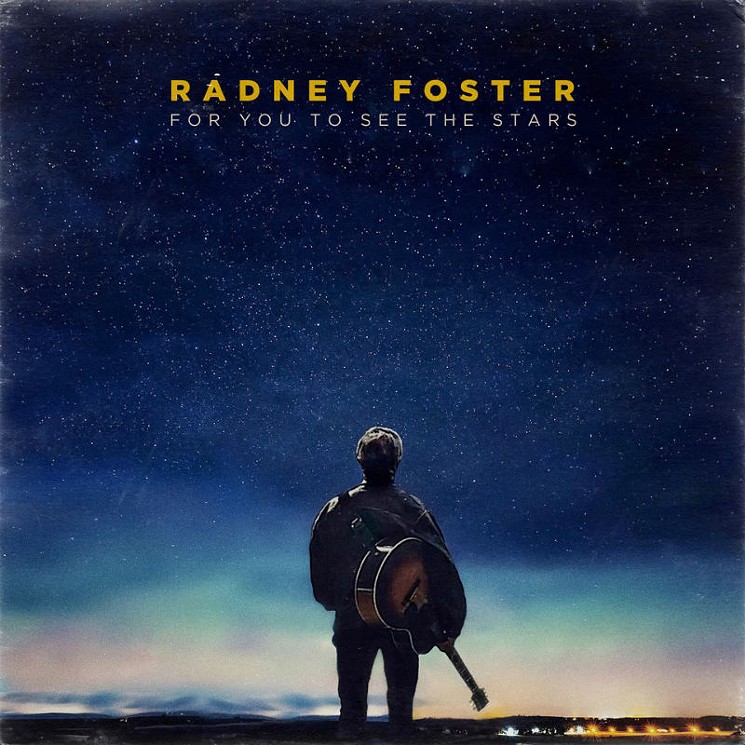 The album and book share a title
Album cover art

She then asked him to start the story from that spot and to scrap everything that had led up to it. And so it went until he’d created a collection, which ultimately became the first book released on Smith's imprint, Working Title Farm.

“If you can write one paragraph that sings that way, you’ve got to write them all that way,” she told him.

That helped Foster equate prose writing to songwriting. He had to make every paragraph as tight as the second verse of any of his hit songs, favorites like “Nobody Wins” and “Crazy Over You” or songs he wrote that have been covered by the likes of Keith Urban, The Dixie Chicks, Luke Bryan, Kenny Loggins and Los Lonely Boys.

He mentioned his vocal predicament and how he dealt with it to recall work with some other special songwriters.

“Not to get too philosophical or theological about it, but I really do think that God gives us creativity as a source of dealing with adversity. I’ve kind of seen it a little bit from working with Darden Smith with SongwritingWith:Soldiers,” he said of the non-profit organization founded by Smith, which teams songwriters with service members as they return from combat.

“When they write a song with you, you watch this catharsis take over them by just being able to tell the story and seeing it come out as a piece of art. It almost becomes a talisman-like thing that they can play for their friends or they can obsessively play through the nights where they’re having trouble.”

Foster said he’s driven to write songs. He writes 25 or 30 a year at a minimum, he noted. Writing songs and short stories changed his songwriting routine a little. The majority of the short stories were inspired by the song first. Two were written and then the songs were created to complement them. One saw Foster working simultaneously on both story and song. The works can be enjoyed independently, but by design they work together to flesh out Foster’s storytelling, which is rooted in his Texas upbringing in Del Rio.

So, who was he reading on all those tours, we wondered? For short fiction, he said “The queen is Flannery O’Connor – there’s just no getting around it,” and listed several other Southern authors as influences. Harper Lee, Ferrol Sams, Zora Neale Hurston and Rick Bragg are favorites. He enjoys Cormac McCarthy and Toni Morrison and once received a copy of John Irving’s A Prayer for Owen Meany as a gift from Brad Paisley. But, he noted, he leans heavily on some influential writers he’s more familiar with, and for a good reason.

“Lyricism influences me, I think, as much as books do. I think having listened to people like Guy Clark and Rodney Crowell a whole lot, and Bruce Springsteen and other people who are really lyric geniuses, can’t help but inform the writing of prose, as well.”

Foster said he’s repeating the process on a broader scale. He’s working on his debut novel.

“I’m crazy enough to figure, okay, I can hold someone’s attention for 2,000 to 10,000 words,” he said with a laugh. He said he’s written five chapters of a historic piece that he’s devoted a year’s research to so far. It’ll include scenes in Cuba, which he traveled to, and west Texas, with which he is all too familiar.

“The fun part about the novel – I’m going to write an album to go with it,” he shared. “It worked this time and people seemed to enjoy it.”

Radney Foster and Darden Smith bring their unique songwriter round, book-reading, storytelling show to McGonigel’s Mucky Duck, 2425 Norfolk, Saturday, April 13. Tickets are $38-$40. Foster performs next Thursday, April 18, at Main Street Crossing, 111 W. Main in Tomball. Tickets are $30-$45.
KEEP THE HOUSTON PRESS FREE... Since we started the Houston Press, it has been defined as the free, independent voice of Houston, and we'd like to keep it that way. With local media under siege, it's more important than ever for us to rally support behind funding our local journalism. You can help by participating in our "I Support" program, allowing us to keep offering readers access to our incisive coverage of local news, food and culture with no paywalls.
Make a one-time donation today for as little as $1.