It takes some huevos to call your book the “definitive” biography on anybody – especially when that stone has been unturned (and unturned…and unturned) many times before. But English music journal Salewicz – who has also penned life stories on Bob Marley and Joe Strummer, achieves his cover blurb goal here. Released last year in the UK, this new U.S. edition is a must-have for fans of Led Zeppelin of the self-styled Dark Magus of rock and roll guitarists.

Page’s life began as a child guitar prodigy before he 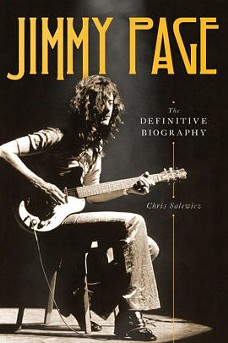 Book cover by Da Capo Press
became a go-to session player while still attending high school. After flirting with – then joining – the Yardbirds, he watched that band disintegrate, but it laid the groundwork for the creation of the band he had always planned for: Led Zeppelin.

And he, bassist John Paul Jones, singer Robert Plant, and drummer John Bonham (the last two he basically stumbled upon in concocting the lineup) would become the biggest band of the decade. One that to this day sells decades-old records with sales figures would be the envy of any contemporary rock band.

As Salewicz writes, English Rock Gods Mick Jagger and George Harrison may have sniffed dismissively after hearing the band’s mixture of thundering hard rock and blues debut album, but record buyers and concertgoers worldwide heartily disagreed. And when they later demanded an unprecedented 90 percent of gross ticket sales at their shows – leaving only 10 percent for the local promoter – they got it.

Salewicz charts it all, with a combination of original interviews, his own experiences with the band, and previously published sources. Perhaps the most entertaining of which comes from former girlfriend Bebe Buell’s memoir in where after she and Page took mescaline, she became frightened at what she perceived was the actual size of Page’s penis – huge enough to stretch across the room. In other stories, Page’s legendary parsimony and reluctance to ever pay for a tab despite his vast wealth gave him the nickname “Led Wallet.”

The author does have a couple of odd personal agenda items, like ascribing certain actions or incidences to astrological signs. Or trying to make a head-scratching argument that the pace of recording for Zeppelin’s first record or the material on Presence could be taken as “punk rock.” Chasing the dragon? The full ‘dragon suit’ gets its first outing at Earls Court, London, in 1975.
Graham Wiltshire/Hulton Archive/Getty Images. Courtesy of Da Capo Press
But his summation that Page was the very knowing architect of his own image – the coy androgynous looks, the silence or soft-spoken tone, the open adherence to and interest in the principles of occultist/pleasure seeker Aleister Crowley and his "magick" (Page even bought and lived in Crowley's old home), is spot on. It was sexual catnip to groupies and headline-grabbing fodder for journalists.

It was only when Page’s heroin addiction overtook his life that some of that image cracked, but also added to his persona of wasted elegance.

“From the very start…Jimmy Page displayed a slightly smirking look of utter confidence and haughty control, with a hidden promise of something sinister cloaked beneath it,” Salewicz writes.

Houston appears a few times in the narrative as the site of shows, most noticeably for the May 21, 1977 gig at the Summit during the band’s ill-fated tour which saw plenty of hard drugs, bad vibes, and violence and intimidation by the band’s management. At that show, 40 fans were arrested for contributing to half a million dollars in damage during a post-show riot.

Despite a handful of reunions with the surviving three members, ranging from the wretched (Live Aid), to the OK (Atlantic Records 40th anniversary show) to the glorious (2007’s “Celebration Day” full show), Led Zeppelin was through with the 1980 death of extroverted power drummer John Bonham (Led Zeppelin taking the opposite track of the Who).

Salewicz notes that as a musician and a man, Jimmy Page has been a little bit lost since the band dissolved, his output fairly sparse and uneven, but his dedication to promoting and preserving the legacy of Led Zeppelin is at times feverish. And fans have him directly to thank for the recent complete reissue of the band’s catalog, with copious bonus material.

No one can deny Jimmy Page’s skill on the guitar, his impact on rock and roll, and his influence on both music and the billion six string children he birthed. And while ultimately, the book doesn’t always give the reader a sense of the “real” Jimmy Page as a person (if that’s even possible – many before Salewicz have tried), as a musician, this book is a Page turner.
KEEP THE HOUSTON PRESS FREE... Since we started the Houston Press, it has been defined as the free, independent voice of Houston, and we'd like to keep it that way. With local media under siege, it's more important than ever for us to rally support behind funding our local journalism. You can help by participating in our "I Support" program, allowing us to keep offering readers access to our incisive coverage of local news, food and culture with no paywalls.
Make a one-time donation today for as little as $1.