John Lennon and Yoko with legal team (Jay Bergen at far right) at Sloppy Louie’s in New York, 1975. Photo by and © Bob Gruen. BobGruen.com.
Over the course of his 45-year career as a lawyer, Jay Bergen has questioned or cross-examined a considerable number of litigants in open court. But there’s one in his mind that tends to stand above all others. 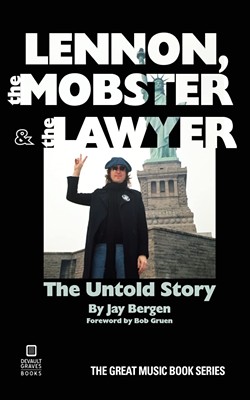 Book cover
“He was the best witness that I ever had!” the now-retired counselor says over the phone from his home. “And you can see by reading the transcript what a perfectionist he was, from all the details of what he did and how he did it.”

The fact that this above-average client was also one of the most famous men in the world at the time—one John Ono Lennon, whose former musical group was of some renown—means that the case the pair worked on together in would always loom large in Bergen’s mind. And probably be of interest to others.

Now, Bergen has written his account of a particularly fascinating nook and cranny of Beatles lore (and as one of the titular characters) in Lennon, the Mobster, and the Lawyer: The Untold Story (324 pp., $28.95, Devault Graves Books).

The court case which forms the crux of the tale took place back in 1975/76. But it was only about five years ago that Bergen was going through all the boxes stored in his garage filled with court records, transcripts, notes, and exhibits that he decided to put it all together in a story, first as a lecture presentation and then as a book.

“I started reading some of John’s testimony and knew I had to tell this story. It’s not so much about the case, but this time in John’s life when he dropped out of the music business,” Bergen continues, adding that he’d read about it in other books and magazines, but says those accounts were often littered with errors.

“Since I was there and involved, I knew I could give the true story. And a peek into who John Lennon was at that time. The man, not the rock icon.”

It was supposed to be a quick and dirty album for John Lennon to make. A dozen or so simple covers of classic songs from the ‘50s and ‘60s he’d loved as a teen and Formative Beatle. But the project had problems from the start.

Morry Levy's "Roots" and the official John Lennon "Rock 'n' Roll" releases. Each had differing versions and tracks.
Record covers
First, what would eventually come out as Rock ‘n’ Roll was recorded during Lennon’s infamous “Lost Weekend” of heavy drinking and debauchery after wife Yoko Ono kicked him out of the house. The “Weekend” part being something of a joke, as it lasted more than a year and a half.

Then, it was discovered that erratic and paranoid producer, Phil Spector, had absconded with the master tapes. When Lennon finally received the 28 reels back, much of it was unusable due to tape and/or performance quality.

But the heart of the book (and the case) was the issue of Morris Levy. The notoriously tough and mafia-connected record exec owned (through means legal and otherwise) the copyright and publishing to scores of oldies, including Chuck Berry’s “You Can’t Catch Me.”
John Lennon had cribbed its opening line, “Here come a flat-top/He was moving up on me” for his own “Here comes old flat-top/He was grooving up slowly” to kick off the Beatles’ “Come Together.” Levy sued.

As part of the legal settlement, Lennon agreed to record three Levy-owned songs, ensuring that Levy would get a nice payday in royalties (and not just as publisher—Levy sometimes attached his own name to songwriting credits). The Lee Dorsey hit “Ya-Ya” appeared on Lennon’s Walls & Bridges, but Levy was impatient for the other two to drop.

To mollify him, Lennon sent Levy a rough mix of Rock ‘n’ Roll. In a move that would be unimaginable today, Levy announced that he was going to release the “record”—which he retitled Roots—with a massive TV ad campaign.
Lennon and Apple/Capitol Records then found themselves in a race to get their disc out quickly, which scuttled all their careful marketing and promotional plans. Roots got pulled, fans were confused and Levy sued for breach of settlement in state and federal courts. Lennon countersued, and the stage was set for a trial.

“I think the whole thing was an attempt to bully John, Capitol, and EMI to make some sort of deal,” Bergen says. “[Levy] was a grifter and not highly thought of. And this put a real dent in his reputation. It got out of hand. Early in our relationship, John made it very clear that he was not going to settle with Morris. He wanted to be rid of him.”

That didn’t mean that Bergen took the situation for granted when his firm (which represented Lennon) told him that he’d one of the attorneys on the case. In fact, no one was more shocked than Bergen to see the Beatle in the flesh during the initial meeting in the New York offices of Capitol Records.
“When the door to the conference room opened and he walked in, I knew I was going to have to hide my surprise. I was still in shock riding the train back to [my home] in New Jersey!” he says.
Still, Bergen wasn’t a shoo-in for the job. He had to pass what he calls The Yoko Audition. And so, he and Lennon’s soul-mate, partner, and most important advisor met privately. Bergen must have passed the test.

“Once we got through that meeting, Yoko was pretty quiet through the case. They were in court every day and we would have lunch together every day,” Bergen says. “I think she really was confident that we were going to do a good job, and John certainly was. And whenever I needed to talk to him or prepare him for a deposition or the trial testimony, he was there, and he was ready.”

But keeping the relationship professional was always the case. During all the time they spent together, Bergen never once asked Lennon for an autograph or posed a Beatles question.
click to enlarge 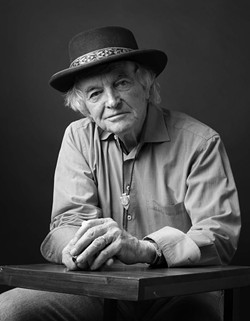 
In fact, the only posed photographic evidence of them together was taken at their favorite lunch haunt near the courthouse, Sloppy Louie’s. The informal shot was taken by Lennon’s friend photographer Bob Gruen, who also wrote the forward to the book.

It includes several of his picture, including one from a camera that Gruen surreptitiously snuck into court while Lennon was testifying. Lennon had asked him to do that for the planned cover for a never-made album about all the various lawsuits.

“Even though I was awed by representing John and spending a lot of time with him and helping him with this case, he was still my client,” Bergen says. “But I was on a kind of high for a couple of years while I was working on the case. It was a fascinating experience.”

Another fascinating player in this saga was Judge Tom Griesa, the second and final judge to oversee the trial. Though he was a music appreciator and musician himself (playing the harpsichord) he was not familiar with the music of the Beatles or John Lennon, particularly the more out-there, avant-garde sound collages the couple were making on albums like Two Virgins (with the infamous cover showing the lovebirds completely nude), Life with the Lions or The Wedding Album.

In a clearly inquisitive mood, Griesa asked for a lot of music to be played in court. And in his questioning in the non-jury trial, Lennon gives a fascinating glimpse and explanation into his creative process, music history, and how records are produced. Bergen’s included court transcripts are anything but dry.

“He wanted to hear it. And he wanted to understand it to render his decision,” Bergen says.
Without giving away the ending, Griesa’s decision, and the fate of the appeals and settlements, it proved to be a landmark case in music litigation. But beyond that, Bergen says his time with John Lennon changed him—and how he approached life—forever.

“I was a person who the way I was raised…I didn’t have much of a voice,” Bergen says after a long pause. “And at the time when John and I were working together, I realized he spoke up for himself. And I started doing the same for myself.”

And when Lennon was murdered on December 8, 1980, it was the same shock to his former lawyer as it was to hundreds of millions around the world. But it also inspired him.

“I realized I had to make some changes in how I handled my personal life. I was always very aggressive in my legal career, and I started to stand my ground more. And that caused turmoil at home,” he says. “But being with John Lennon really changed my life. And in many ways, it went into a more positive direction.”

For more on the book, visit LennonTheMobsterAndTheLawyer.com
KEEP THE HOUSTON PRESS FREE... Since we started the Houston Press, it has been defined as the free, independent voice of Houston, and we'd like to keep it that way. With local media under siege, it's more important than ever for us to rally support behind funding our local journalism. You can help by participating in our "I Support" program, allowing us to keep offering readers access to our incisive coverage of local news, food and culture with no paywalls.
Make a one-time donation today for as little as $1.