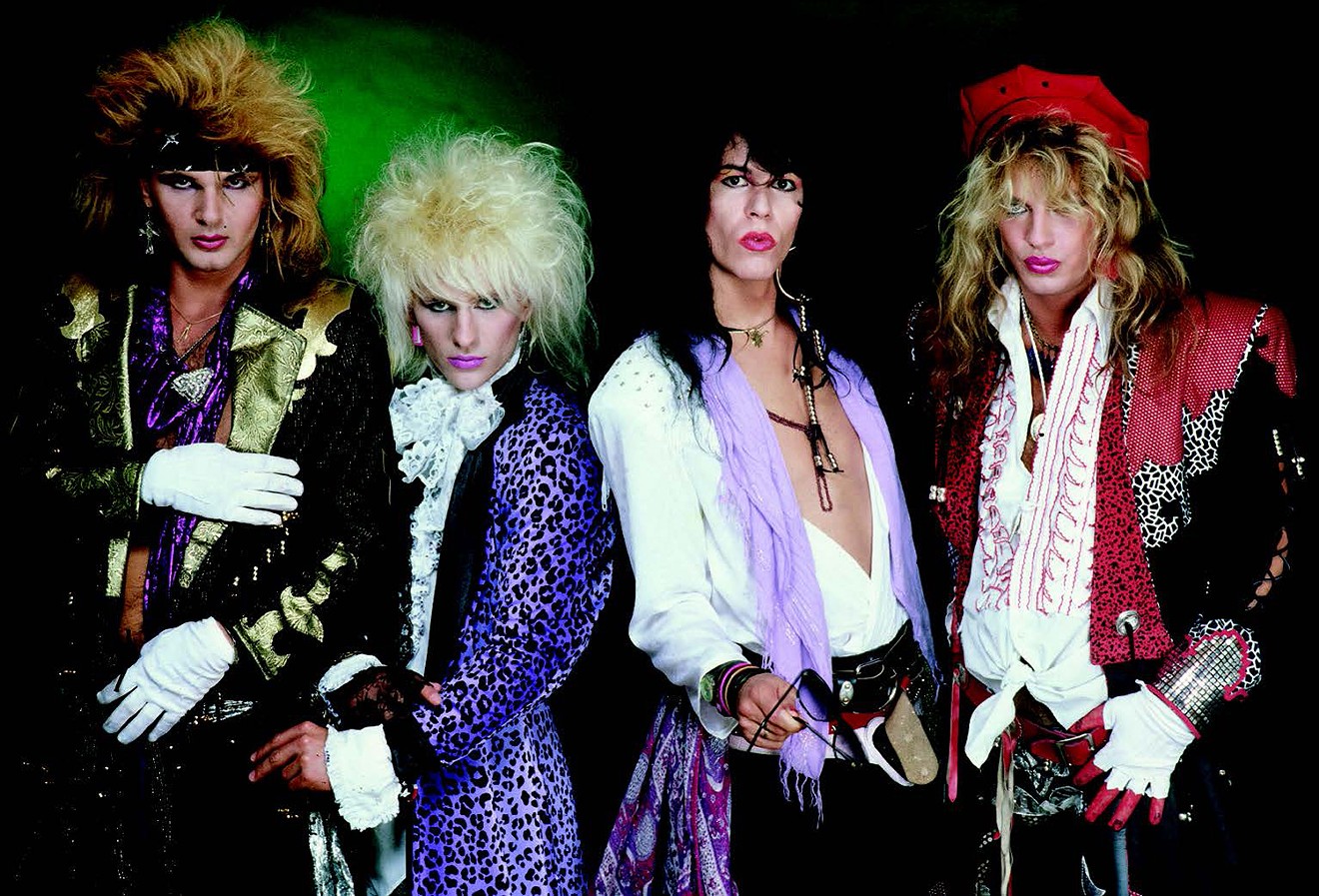 Poison in Los Angeles, CA, 1986. From L to R: Rikki Rockett, C.C. Deville, Bobby Dall, and Bret Michaels. Photo by and © Mark Weiss/Courtesy of St. Martin's Press
Come with us, children, back to the magical, mystical land of the 1980s. Where for a brief but shining span of time the hair was high, the riffs were righteous, the lead singers preening, the flashpots fiery, the colors popping, and the party never stopped on Sunset Strip—or at the strip club.

St. Martin's Press book cover
Some have survived and continued to rock and fill large arenas or clubs, while others faded into obscurity. And the entire story is told in the new book Nöthin’ But a Good Time: The Uncensored History of the ‘80s Hard Rock Explosion (560 pp., $29.99, St. Martin’s Press).

“This is the music that has never left us. We’ve always discussed doing a book because it would be fun and cool, but an enormous task” Beaujour says in a dual Zoom interview with Bienstock. “But it's the music that captured our imaginations when we were young. And you only get that relationship with music a couple of times in your life. You can’t bond with a genre as strongly in, say, your thirties.”

The 1980s time period and Los Angeles/Hollywood locale seemed to make a perfect breeding ground for the hard and fast sound with an unapologetic party vibe. “You had all these clubs in walking distance of each other on the Strip, and all around Hollywood, so all these bands and audiences were very concentrated,” Bienstock says.

In those pre-internet, pre-smartphone days, there were basically two ways outside of word of mouth for a band to promote their gigs: cheap ads in local rock publications, or be a soldier in the Great Flyer Wars. How many trees gave their lives for bright paper being plastered to area telephone poles – only to be covered up by a competing group’s notice, sometimes within hours – we will never know. Sabotage and skullduggery for placement ensued. It makes for one of the book’s more entertaining chapters.

“It was a full scale Marines-like operation!” Bienstock laughs. “These bands would print and put up thousands of flyers, but you also had to know what glue to use and where to place them and when to go out. You had to get people in the clubs, otherwise you wouldn’t get another gig. But [city workers] had to clean this up! It was like full-on vandalism in the name of show promotion.”

Guns n' Roses, Los Angeles, CA, 1986. From L to R: Steven Adler, Izzy Stradlin, Axl Rose, Duff McKagan, and Slash.
Photo by and © Mark Weiss/Courtesy of St. Martin's Press
There’s also an anecdote from members of Warrant how Guns n’ Roses bassist Duff McKagan left a very threatening voice mail that the Gunners would come kick their asses if Warrant stuck their own flyers over a GNRs one again, something the authors got McKagan to corroborate. The book also notes how Poison had something of an advantage, as guitarist C.C. Deville’s mom owned a copy shop.

In fact, Poison’s story and history is one of the book’s more interesting. Hailing originally from Pennsylvania and nakedly ambitious, their early visual formula seemed odd: They dressed in effeminate clothing and wore heavy makeup. This somehow attracted a huge female ban base just as eager to have sex with the members as get grooming tips. This in turn attracted males to ensure sold-out shows.

The band still does incredible live business today, touring with the classic lineup for large crowds eager to hear “Every Rose Has Its Thorn,” “Talk Dirty to Me” and the song from which the book takes its title.

“It helps to have all four guys, and each one of them had a personality. We [learned] a lot about their story that hadn’t really been reported on before,” Bienstock says. Beaujour adds that Poison’s commercial success plays a part in their longevity. “They had more Top 10 hits than Mötley Crüe, which surprised us. They reached more people that transcended the core fans of this music. Bret [Michaels, singer] is a serious hit writer.”

Skid Row, Los Angeles, CA, 1991. From L to R: Rachel Bolan, Rob Affuso, Sebastian Bach, Dave "Snake" Sabo, and Scotti Hill.
Photo by and © Mark Weiss/Courtesy of St. Martin's Press
Another band’s story the book digs deep into is that of Skid Row. A group that could do power ballads, rock anthems, and harder music, they seemed to be set for longer success. But the combustibility of lead singer Sebastian Bach and some of his over-the-top antics and controversial behavior alienated the rest of the band.

“They were a bit at loggerheads from day one. Literally the first night Sebastian joins the band, he gets into a bar fight. But he’s this kid who’s just 20 years old with this insane voice who is literally beautiful,” Bienstock says. “If you created sort of an ‘80s rock god in a lab, it would be Sebastian Bach. The other guys knew what they were getting, and it took [Sebastian] to put them over the top. He was ‘rock’s bad boy’ and acted like he thought he was supposed to act, then didn’t [understand] why people were shocked.”

The book also discusses the prime importance of MTV in the career of these bands and their record sales, especially given they were so visual with the costumes and hair and explosions and scantily-clad women doing things that would not fly at all today. But in conversation, both authors feel that the music video channel was just as crucial for bands well outside Hair Metal.

Bienstock adds “A lot of these bands also played every show, even if it was a club, like they were playing Madison Square Garden. So a lot of times you just had to put a camera on then and let them do what they normally would onstage.”

Mötley Crüe in their "Theater of Pain"-era outfits, Los Angeles, CA, 1985. L to R: Nikki Sixx, Vince Neil, Tommy Lee, and Mick Mars.
Photo by and © Mark Weiss/Courtesy of St. Martin's Press
But, like many other genres, the heyday couldn’t last forever. In the early ‘90s, bands like Nirvana, Soundgarden, and Pearl Jam came in with a different look and sound that caught the pop culture zeitgiest. Hair Metal genre’s fall was as fast and sudden as its rise, even though as the book posits, the “Grunge killed Hair Metal” theory is overly simplistic.

Of course, nothing ever really goes away. The 1970s saw a resurgence of interest in the music of the 1950s, and Gen Xers of the late ‘80s all wanted to be at Woodstock or a Doors concert. Today, Hair Metal has seen a resurgence from Broadway (Rock of Ages) to a dedicated channel on SiriusXM (Hair Nation), "tribute" acts (Steel Panther), movies (the Mötley Crüe biopic The Dirt). It’s even part of the playlists on terrestrial “classic rock” stations.

In Houston, a look at Warehouse Live’s upcoming concert calendar lists shows by L.A. Guns, Winger, Slaughter, Kix, Lita Ford, Bulletboys, Warrant, Sebastian Bach, and Mike Tramp (White Lion). Audiences include Millennials and Gen Z new fans among the original Gen Xers, with parents bringing along their children to shows.
“It’s definitely nostalgic for people our age, and there’s a distance from the original [time period],” Bienstock sums up. “When Poison does ‘Nothin’ But a Good Time’ in concert, everybody knows all the words, and everybody’s having fun. It makes you happy, and you want to turn it up. It’s just fun in a way that a lot of music today is not.”

“I spend more time on YouTube watching these videos than you’d think having just written this book!” Beaujour laughs. “But the numbers of views are huge. Young people can just consume and investigate anything they want, and they do. To be able to look at bands who looked like superheroes. It’s like ‘I wanna be that dude. He’s having fun, he’s running across the stage, he’s jumping, people love him, and there’s fire!’”
KEEP THE HOUSTON PRESS FREE... Since we started the Houston Press, it has been defined as the free, independent voice of Houston, and we'd like to keep it that way. With local media under siege, it's more important than ever for us to rally support behind funding our local journalism. You can help by participating in our "I Support" program, allowing us to keep offering readers access to our incisive coverage of local news, food and culture with no paywalls.
Make a one-time donation today for as little as $1.