Record cover detail from Pink Floyd's "The Dark Side of the Moon."
It is one of the most famous and enduring albums in the Classic Rock Canon. Listening to it for the first time whether it be on vinyl, CD, or Bluetooth speaker, is almost a teenage rite of passage. And who knows how many joint-and-bong smoking sessions it has soundtracked over the decades? 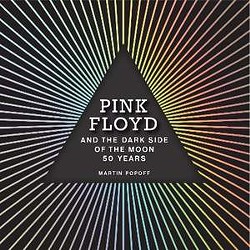 Book cover
The year 2023 marks the 50th anniversary of Pink Floyd’s The Dark Side of the Moon. Its 42-minute-and-50-second length features some of the band’s biggest and most enduring hits (“Money,” “Us and Them”), soundscapes (“Brain Damage,” “Any Colour You’d Like”), deeper cuts (“Breathe [In the Air]),” “Time)” and one wordless emotional journey of pain and ecstasy, courtesy of guest vocalist Clare Torry (“The Great Gig in the Sky”).

Martin Popoff, the very, very prolific rock journo, celebrates all aspects of the record in the handsome, slipcased (but unofficial) volume Pink Floyd and The Dark Side of the Moon: 50 Years (176 pp, $50, Quarto).

Popoff’s brisk prose may be spare and the book is a very quick read, but it’s full of enough detail to please both the band’s newest and also veteran fans. After discussing Pink Floyd’s formation and history, their eighth album is dissected in terms of writing, rehearsal, and production—down to tech nerd specifics on the band’s gear and equipment.

Band members Roger Waters, David Gilmour, Nick Mason, and Richard Wright—along with founding member Syd Barrett—get individual profiles. Popoff also breaks down each track, the tours that both pre- and post-dated the record’s release, the record’s legacy and influenced, and many side nooks and crannies.
Nuggets of trivia (though some familiar) emerge. Paul and Linda McCartney were among a few dozen people recorded answering questions of both deep importance and triviality on Roger Waters’ index cards for spoken word interludes sprinkled throughout the record. But their contributions were not used because they were deemed too rehearsed and polished.

The iconic and simple cover of a pyramid refracting white-to-rainbow light by design firm Hipgnosis was only one of several contenders that included one featuring Marvel Comics character the Silver Surfer. And that the color indigo was left out of the graphic because when printed in CMYK process, it was deemed too close in hue to the violet band.
Befittingly, the book is stuffed with photos of the band in a variety of settings, album covers, posters, ticket stubs, advertisements, rare promotional items, and other ephemera. These are a treat to sift through for casual and diehard fan alike.

Post-Dark Side, the Pink Floyd story would include more records (including the iconic The Wall), projects, breakups, bitter lawsuits, and one brief, shining reunion at Live 8 in 2005.
Popoff brings the story up to date, including this year’s “Pink Floyd” (just Gilmour and Mason—Wright passed in 2008 and Waters is still at odds) recording of “Hey, Hey, Rise Up.” With a pre-recorded contribution from Ukrainian vocalist-turned-soldier Andriy Khlyvnyuk of rock group Boombox, the charity single supported Ukraine and its struggle against the Russian invasion.

As of now, The Dark Side of the Moon has sold 45 million copies, and it’s placed sixth highest in all time album physical sales (eighth when streaming is included). It has also spent an unmatched 961 non-consecutive weeks on the Billboard 200 album chart. Popoff’s worthy literary complement can only deepen appreciation for what many consider Pink Floyd’s crowning sonic achievement.
KEEP THE HOUSTON PRESS FREE... Since we started the Houston Press, it has been defined as the free, independent voice of Houston, and we'd like to keep it that way. With local media under siege, it's more important than ever for us to rally support behind funding our local journalism. You can help by participating in our "I Support" program, allowing us to keep offering readers access to our incisive coverage of local news, food and culture with no paywalls.
Make a one-time donation today for as little as $1.