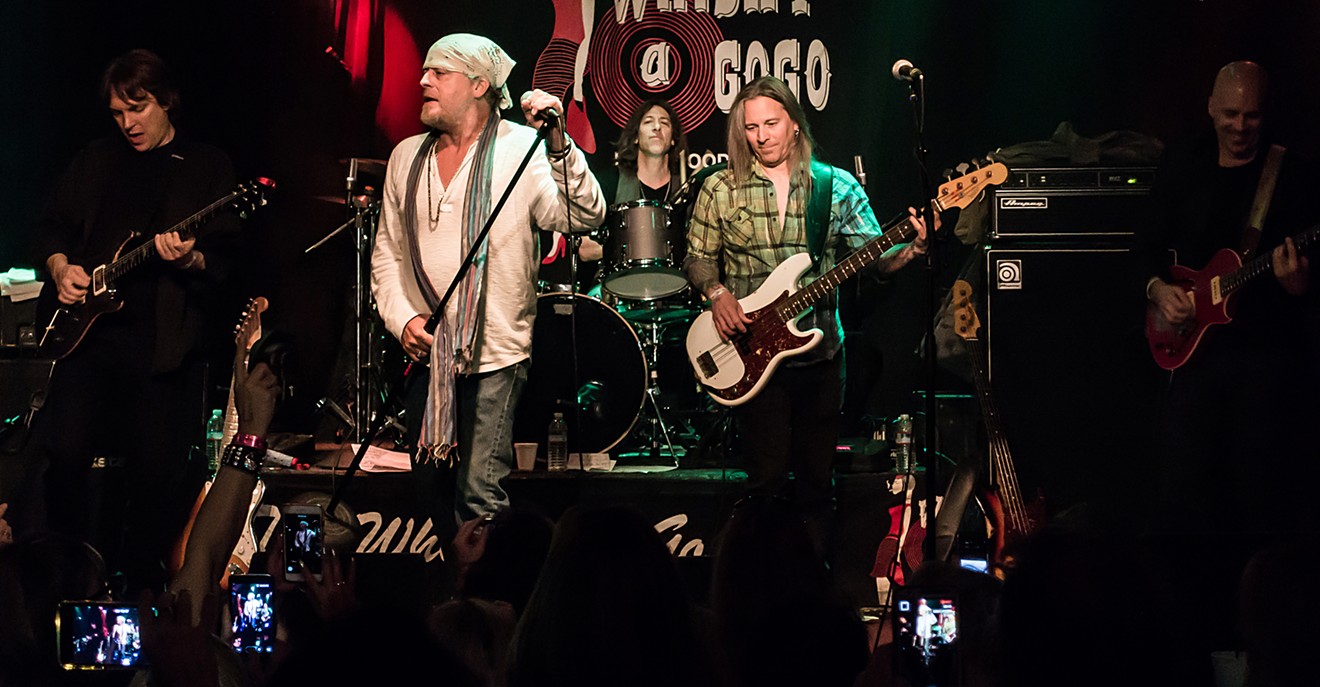 Leif Garrett and his band perform at L.A.'s Whisky a Go Go Club in 2016. Photo by Justin Higuchi (Jos1oh)/Wiki Commons
It’s one thing to make a memorable stage entrance, but this was something way out of the ordinary. That’s what was going through 17-year-old Leif Garrett’s mind on the evening of February 25, 1979 as he charged across the dirt floor of the Astrodome on a white horse and carrying aloft a breeze-whipped Texas flag prior to his performance at the Houston Livestock Show & Rodeo.

“That was really strange! It was the livestock show and rodeo, so obviously there was a lot of actual shit on the ground going toward the stage!” Garrett laughs on the phone. “They had the four-wheeled buggies, but that was a non-dramatic way to enter. So my manager asked if I could ride a horse, and I could! My band played ‘The Yellow Rose of Texas’ as I rode up, and people went nuts.” 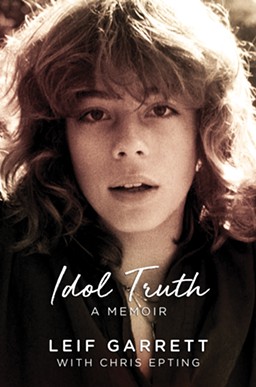 Post Hill Press book cover
Surprisingly, that gig in front of about 35,000 people was only his second live concert more than two years into his career. “At first I thought at first ‘Oh my God, I’m wearing a black leather jacket, black spandex pants and white Capezio dance shoes and I’m going to look like a complete chooch!’” he laughs. “I was scared, but I really wanted to show I could perform.”

Later on. after arriving at his Houston hotel, he and his tour manager discovered that some fans had paid off the hotel maid for access to his room, had gone through his possessions, and were now hiding in his closet. “That’s when I knew things had changed,” Garrett recalls in his new autobiography written with Chris Epting called Idol Truth: A Memoir. “This was the moment I knew that my life was no longer my own, and it was scary.”

Interestingly, it wasn’t any singing career that landed Leif Garrett his initial popularity in teen magazines. He was a child actor racking up an impressive list of credits on TV (“The Odd Couple,” "Wonder Woman," “Gunsmoke”) and movies (Walking Tall, Bob and Carol and Ted and Alice). And though his last TV series “Three for the Road” didn’t last long, editors at Tiger Beat magazine took notice as Garrett was generating more mail from readers than far more established stars – up to 1,000 letters a day. In the late 1970s, Leif Garrett was teen idol royalty.

A next move to singing seemed only natural. Garrett signed with the notorious Scotti Brothers and began putting out music. By the age of 16, Garrett was making appearances around the world to thousands of adoring and screaming fans (though largely lip syncing on stages and in television studios). With practically no adult supervision or direction, he delved headfirst into a hedonistic lifestyle of sex, drugs, booze, and more sex. Rarely has the well-worn rock and roll phrase “too much, too soon” been more accurate.

In the book, Garrett is also honest about the role that Jim Haas played in his career. Never heard of him? Well, if you had one of the first three Leif Garrett records or seen him live in concert, you have heard Jim Haas. He was a vocalist brought in to smooth out and sweeten up Garrett’s own vocals – even if it meant he was tucked out of the way behind a stage curtain while Garrett was out front. Garrett can only guess as to whose microphone was turned up more on stage or in the studio.


“There’s some songs…it’s not me at all. I can tell it’s not me. It’s one thing to layer your vocals – even Mick Jagger does that. But having someone else in there, it made me feel…I just wanted it to be honest,” Garrett says. And while he notes that Haas’ presence decreased on each of his first three records, it wasn’t until his fourth that the microphone was all his own.

Garrett’s career was gaining heat. His biggest single came in early 1979 when “I Was Made for Dancin’” hit No. 10 on the U.S. Billboard chart. He was trading quips with Bob Hope, singing with Marie Osmond, and performing with Flip Wilson on his own prime time TV special. Things were looking very good. 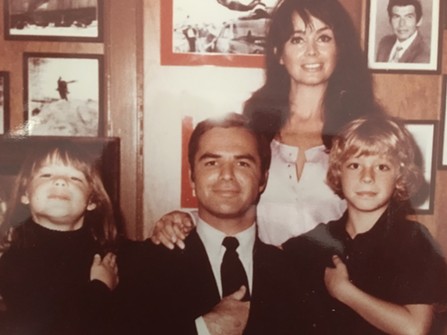 Leif Garrett's mother, Carolyn, dated Burt Reynolds in the early 1970s. To Leif (right) and sister Dawn (left), the movie star had a fun sense of life and was good with kids.
Family photo from Leif Garrett's personal collection
But Garrett was frustrated by his complete lack of input or any decision making in his career, and the Scotti Brothers kept having him record out-of-step covers of hits of the ‘50s and ‘60s and disco material when he wanted to rock out more.

He owns up to his behavioral mistakes - and there were many. But it’s clear that he was ill-served by seemingly every adult in his life: an absent father, a naïve mother, and men in suits whose only interest was in keeping the money flowing, even to the physical detriment of the teen idol generating said income.

“It was very frustrating. I was not a seasoned singer. I wish I had gotten lessons to learn technique and breath control and things like that. I mean, I could hold a note, but I needed more,” Garrett says. “And I had no one to talk to about any of that or anything!”

“Teen Idol” is something of a pejorative and complicated term. After all, weren’t Frank Sinatra, Elvis, and the Beatles up to the Jonas Brothers and Taylor Swift “teen idols” at one point? And how can a performer make the jump from, say, David Cassidy to David Bowie?

“It’s not impossible, but you can’t use the same formula for the music, and that’s what the Scotti Brothers did with me. You have to grow,” Garrett says. “The teen idol span is about five years. And the minute that [the fans] have sex, the musical tastes change, it becomes more mature. When you’re younger, it’s the rush, the thought, the desire of having sex. But when the actual act happens, you go from Leif Garrett to Led Zeppelin!”


As later records failed to chart, his fan base grew up, and work dried up, Garrett began using more and more drugs, while still dating actresses like Justine Bateman and Nicolette Sheridan. He had a small but memorable part as a rich kid "soc" in Francis Ford Coppola's The Outsiders. Idol Truth also includes anecdotes of partying with celebrities ranging from Jane’s Addiction’s Dave Navarro, Aerosmith’s Joe Perry (who Garrett introduced to his own coke dealer), and Robert Downey, Jr.

One incident involves Garrett and fellow teen idol Andy Gibb watching a German recording session for Queen while blitzed on cocaine given to them as a gift from singer Freddie Mercury. Then there was that time that Garrett, um, gave Michael Jackson a copy of Penthouse, some lube lotion, and told him how to masturbate…which the then 20-year-old future King of Pop said he had never done before (and said the morning after he still hadn’t).

“I didn’t care about my career anymore. I cared about heroin. Heroin became everything to me.” Garrett writes. He estimates that at one point he was spending $300 a day on black tar heroin, and amplifying it with booze, cocaine, and Quaaludes. He adds that he was high throughout the filming of his 1999 episode of VH-1’s “Behind the Music” – even if he claimed he was clean to the camera.


In recent decades, Garrett has alternated working on music and acting – sometimes playing himself. It hasn’t been easy. He’s also continued to have issues with drugs and stints in rehab. As to the future, Garrett says he is working on new music, a film script, and a sequel to Idol Truth, one that focuses more on who he is as a person, and what he is today.

“I know I have a lot of baggage," Garrett says. "And one of the first things that I get asked in interviews – and I thank you for not doing it, I appreciate that – is usually ‘How are you now? Are you OK? Are you sober? It’s like fuck off, man!"

And the truth of Idol Truth? It's that Leif Garrett wants to eventually be known more for his music than his mistakes. “This is not just about drugs or someone’s sobriety. It’s also about the talents that I had and doing things for people to enjoy like music and TV and films. But as far as [sobriety] goes, yes, I am. It’s been awhile, and I’m happy about that. People have misconceptions about me being a general fuck-up, and I’m addressing [in the books] that that’s not the case. Everyone fucks up occasionally!”
KEEP THE HOUSTON PRESS FREE... Since we started the Houston Press, it has been defined as the free, independent voice of Houston, and we'd like to keep it that way. With local media under siege, it's more important than ever for us to rally support behind funding our local journalism. You can help by participating in our "I Support" program, allowing us to keep offering readers access to our incisive coverage of local news, food and culture with no paywalls.
Make a one-time donation today for as little as $1.