From Russia with Surf: Messer Chups Bringing Their Spooky Surf Sound to Houston 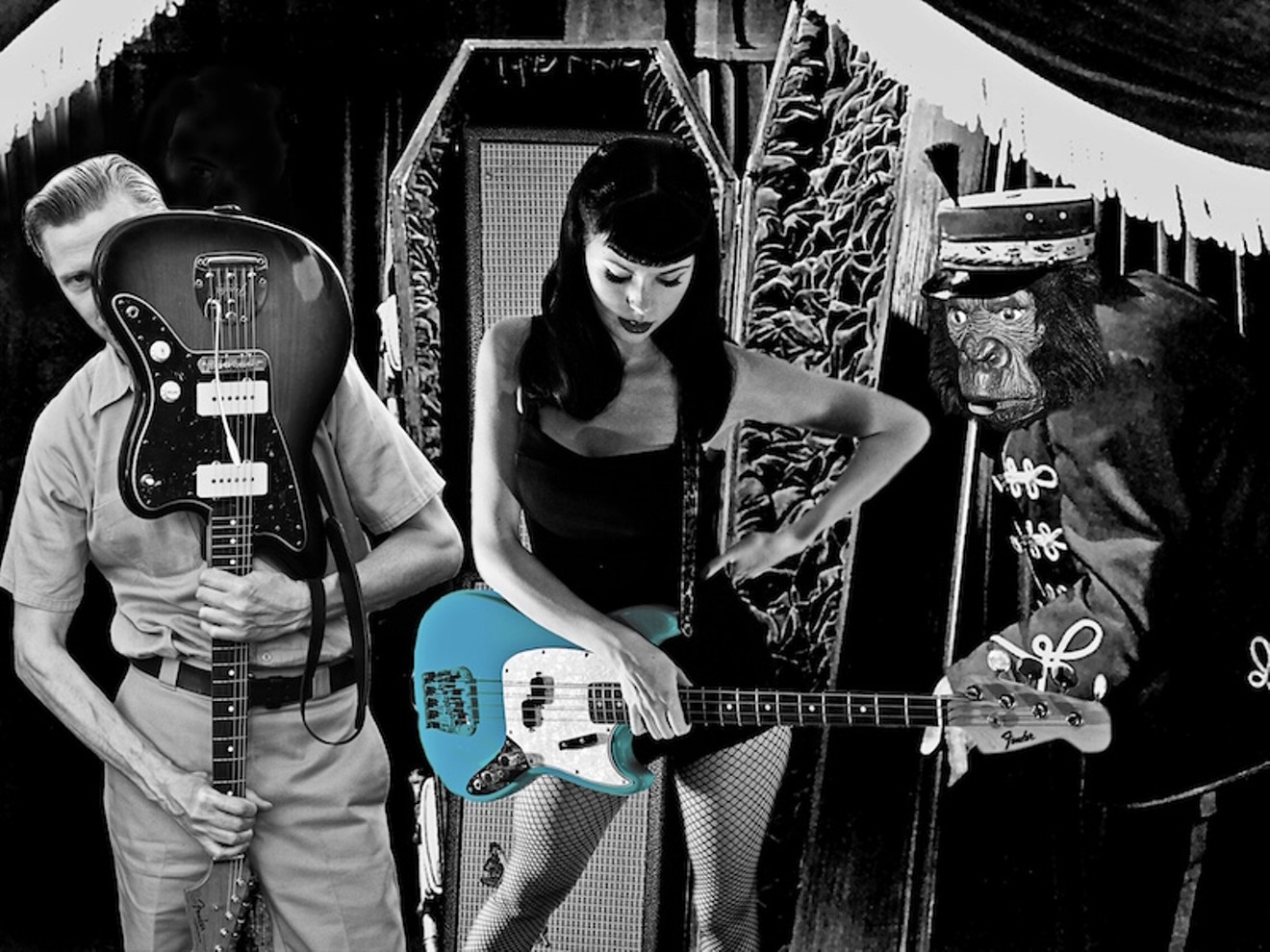 Messer Chups brings their creepy surf sounds to Houston for the first time. Photo by Oleg Guitaracula
If someone took a vintage tiki cocktail mixer and added shots of Bela Lugosi, Dick Dale, a gothic Barbie, and a splash of Adam West-era Batman and Robin, the result might be something like Russian surf rock band Messer Chups. Messer Chups will be making their first appearance in Houston this week at Continental Club and the audience is in for a rockin’, sexy and spooky treat.

Messer Chups hails from Saint Petersburg, Russia, which has a reputation as the home of Russian rockabilly. They have been on the scene for about 20 years bringing their interpretation of surf rock combined with imagery of horror and sci-fi to fans all over the world.

Their name derives from a play on words that mixes the macabre and the sensual, an accurate reflection of the band themselves, with messer meaning knife in German and chups from “chupar” or “to suck” in Spanish.  Messer Chups is made up of Oleg “Guitaracula” Fomchenkov, Svetlana “Zombierella” Nagaeva and Evgeny Lomakin AKA “Rockin Eugene.” Fomchenkov and Nagaeva have been playing together since 2005. He approached her to be the bassist in the band when she was just a young “zombie girl.”

The band has had a handful of members of the years but Nagaeva describes their current chemistry as ideal saying: “We played with Eugene for a long time and then another drummer and now we are back and I think we have a very good connection like all together for now it’s perfect.”

Chups is known for their heavy surf rock sound and live performances incorporating visual art projecting old horror and sci-fi movies. Fomchenkov shreds his fretboard showing no mercy and adding his perfected horror movie villain laugh. Nagaeva plays her bass with hypnotizing bass lines and a pouty expression that brings to life the term man-eater. Her vocals carry that squeaky rockabilly sweetness slathered in her Russian accent and the occasional scream bordering between cute and ghoulish. “Rockin Eugene” holds it down on drums adding menacing howls throughout tracks.

Their last album, Taste the Blood of Guitaracula (2017), is a 17-track tornado of sounds. It features a fast paced, horror infused, surf rock album and some surprises such as a cover of Frank Sinatra’s “The World We Knew.” In the video for "Magneto" they prove they don’t need any stage antics to rock out; hell they don’t even need vocals to make their point.

It may seem odd to imagine this trio of young rockers in Russia absorbing the sounds of California surf rock and classic Hollywood Horror movies, but group members deny that it's a gimmick or marketing ploy.

“For us it comes naturally. We love surf music, we love horror so it’s a natural thing for us," Nagaeva says. "It’s not like ‘oh lets add this to that’, no it’s just the things we love and it comes all together. You know like a good dish or something, you put some spices and now that goes well that way.” She adds, “It should be natural otherwise it’s like strange.”

"We love surf music, we love horror so it’s a natural thing for us."


Russia is not known for surf rock and Nagaeva admits their influences often come from outside their home country, “I think mostly we’ve been inspired from bands from other countries because for us it’s not a natural thing, all this music is borrowed.”

The band obviously takes influences from King of Surf Rock Dick Dale and with his recent passing we asked if they had any special memories of the surf rock God. Svetlana describes their firsthand experience, “We played in Germany in 2006 together with him. He was very loud. He’s really an impressive person.”

She remembers specifically one detail of his live show, which Oleg filmed and still has to this day, “He came a little bit before the show to start his concert after we finished and he started to play the first part of the song inside the back stage and the band was already playing on stage. It was impressive because we heard the sound outside and then on stage.” She adds, “He started all this. Big respect to him, he was really like the king of surf music.”

Messer Chups has been busy in the past few months, traveling from Russia to California, where their record label MuSick Recordings is based. They began with rehearsals in Los Angeles, then kicked off the tour in Mexico and making their way back to the United States playing a new city every night. “It was a little bit hardcore but we did it,” says Nagaeva.

When asked to describe their live shows for Houston readers who have most likely never seen them before the artist says coyly, “Creepy, but in a nice way. Maybe it’s better not tell then they will be surprised.” She adds, “Each show is different but we enjoy it.”

Their fan base in Mexico, where this tour began, is not only large but also stands out for passionate reactions to the music. “The pubic there is the most wildest. Very wild! I was a little bit scared. The reaction is so impressive, too much emotions. So over excited, not aggressive, but over excited like jumping on stage and all that, but it was a nice feeling," says Svetlana.

This energy should easily translate to U.S. audiences who haven’t had as many opportunities to see Messer Chups live. The band has not always had an easy time obtaining visas to travel and tour the United States.

Their manager, Art Bourasseau, describes the historically stressful process, “I always heard it was difficult for Russians to get U.S. visas, so I was pretty worried considering we had already invested time and money in booking and promoting. The tour has to be booked and confirmed before the U.S. government approves the artist visas. Surprisingly, though, it all went swimmingly and they got the visa — and pretty quickly too!” He adds, “Now we’re petitioning for their fourth U.S. visa for fall 2019 to fall 2020.”

Messer Chups will perform with local bands The Phantom Royals and The Genzales Thursday, April 11 at the Continental Club, 3700 Main, doors open at 9:30 p.m. $18
KEEP THE HOUSTON PRESS FREE... Since we started the Houston Press, it has been defined as the free, independent voice of Houston, and we'd like to keep it that way. With local media under siege, it's more important than ever for us to rally support behind funding our local journalism. You can help by participating in our "I Support" program, allowing us to keep offering readers access to our incisive coverage of local news, food and culture with no paywalls.
Make a one-time donation today for as little as $1.