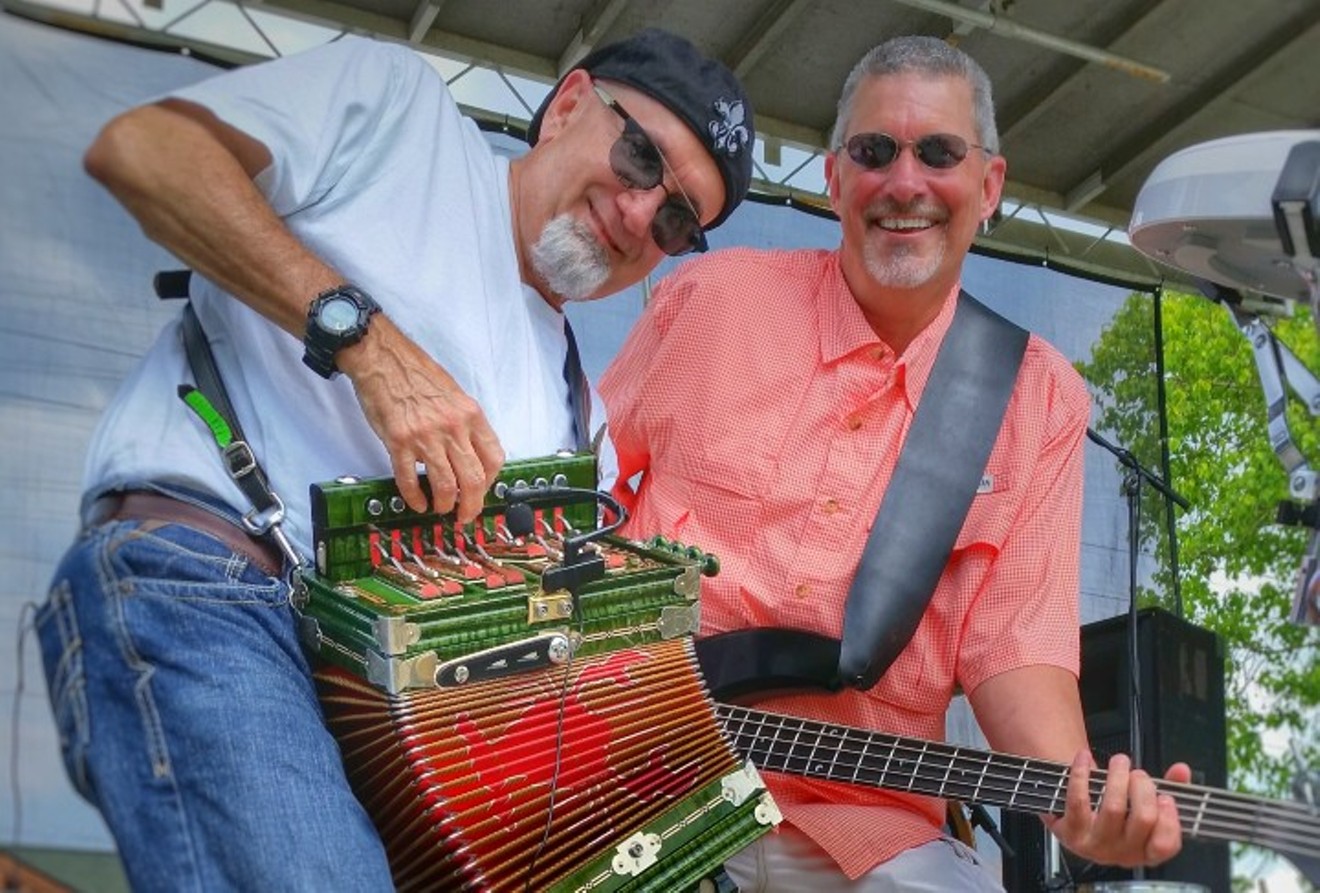 Keith Dupuis and Ted Lee at a prior Bayou Roux Tomball festival performance. Photo by Mike Baxter
Update 3:30 p.m. 4-30-21: Because of inclement weather (all that rain with more expected) festival organizers have announced the Rails & Tails Mudbug Festival has been canceled for this year.

While the phrase “May Day” typically signals a distress call from a ship or boat, it’s also the traditional nomenclature for May 1 in the calendar year. And for Ted Lee, co-founder/bassist for the Cajun-centric band Bayou Roux, this year’s May Day will be anything but stressful.

In fact, he’s looking forward to taking the stage at the Rails & Tails Mudbug Festival in downtown Tomball. And he already knows how he’ll feel. The mudbugs will be plentiful at Rails & Tails.
Photo by Mike Baxter
“My overwhelming thought and emotion is how excited I’ll be just to be out and playing for people again and seeing them enjoying themselves,” the native of Lafayette, Louisiana but Houston resident says. "We haven’t seen a lot of our friends in the audiences or other bands in over a year. It’s been tough for anyone involved with events and live music.”

The Rails & Tails Mudbug Festival kicks off the return of the full festival season at the historic and scenic downtown train depot in Tomball. For Mike Baxter, Director of Marketing and Tourism for the city, it will be something of a rebirth and reintroduction to both residents and those who’ll come from around southeastern Texas and even Louisiana.

“Things looked to be lessening COVID-wise, and early in the year, we started planning the events as if we were going to do them,” Baxter says. “They need lead time, so we had to proceed. Then things began to lighten up around the state, and we went full speed ahead.”

In addition to the live music, food stalls and trucks (with crawfish, boudin, étouffée, fried shrimp, and other festival foods), beer/wine vendors, artists/crafts stalls, and a Kids Zone, there will be some extras safety precautions.

Baxter says that the main covered tent for festival goers will be increased 40 percent in size (but still have the same amount of chairs and tables), hand sanitizing stations will be spread throughout, and a janitorial company will clean areas and restrooms throughout the day. Masks will not be required, and there is no set attendance capacity. “It’s an outdoor festival with a substantial area, and there’s plenty of space around the railroad depot, on the [green], and in front of the stage,” Baxter offers.

And as a member of the Board of Directors on the Texas Festivals and Events Association, he knows firsthand from hearing reports in other Texas cities that people are definitely ready to get out again. He says one recent outdoor festival in Ennis that normally attracts 10,000 attendees recently chalked up three times that amount. “We’re looking forward to some big numbers. But we’re mainly looking forward just to being back in the business of entertaining people.” 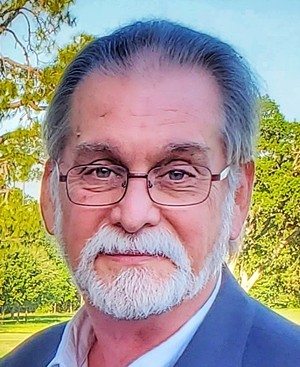 City of Tomball Director of Marketing and Tourism Mike Baxter
Photo by Mike Baxter
The city of Tomball’s Festival program celebrates its 10th anniversary this year, and 2021 marks the 9th annual Rails & Tails. Other festivals planned for the year include several related to holidays, and music-centric ones like the Honky Tonk Chili Challenge (June 19), the oldies/classic rock-centered GroovFest (September 18), and the Bluegrass Festival (October 16). All of them offer free admission and parking.

“We wanted to use these events so that it brought people to Tomball who may have never been here before,” Baxter says. “We wanted to throw a party and have fun, but we also want people to realize that Tomball is more than that little town you drive through on the way to the Renaissance Festival.”

He adds that the numbers of sales taxes from surrounding businesses prove that theory, and further shops/restaurants/bars have sprung up in the Railroad Dept-adjacent Market and Commerce Streets, with Houston Street next in line. Baxter says that most are traditional “mom and pop” businesses.

Bayou Roux has graced the stage at the Tomball Railroad Depot many times over the years at the Festivals—occasionally sharing time with a fast chugging, horn-blaring string of trains passing by behind them.

Formed in 1992 with most members hailing from the area of Lafayette, Louisiana, the current lineup includes original members Lee, Keith Dupuis (accordion), and Mike Bourgeois (drums), along with Dwayne Boehnemann (keyboards) and Ken Reynolds (guitar). The band also plays occasionally with a horn section and additional musicians. And while they first started out as a straight Cajun music band, Lee quickly found that Texas audiences demanded a little more variety in their live music.

“When we started, we sung in French, had the fiddle, and acoustic guitars. And we found that living in Texas that was cool, but they love blues and country and rock and roll too. So we branched out to be more marketable,” Lee says.


The Bayou Roux setlist at Rails & Tails will of course feature Cajun music, but also sprinkled in will be familiar country and rock covers, and band originals. A typical set list will include around 20 numbers, but Lee keeps a list of 75+ that the band can pull out on a whim while reading the crowd for age, taste, and level of dancing.

Like every band around the country (and live music venue…and festival organizer), Bayou Roux’s performance schedule and bottom line has been hit hard by the effects of the pandemic. They’ve lost out on the usual busy schedule of festival dates, club gigs, and corporate parties. In fact, Rails & Tails show will mark only their second full band performance since March 2019.

Still, Bayou Roux is more than ready to play again and let the good times roll. And there’s one thing he says could stop the show—and it ain’t coronavirus.

“The only thing that can mess us up is the weather!” Lee laughs. “But we’re hoping for the best!”

For more on Bayou Roux, visit BayouRoux.com
KEEP THE HOUSTON PRESS FREE... Since we started the Houston Press, it has been defined as the free, independent voice of Houston, and we'd like to keep it that way. With local media under siege, it's more important than ever for us to rally support behind funding our local journalism. You can help by participating in our "I Support" program, allowing us to keep offering readers access to our incisive coverage of local news, food and culture with no paywalls.
Make a one-time donation today for as little as $1.