Steve Boone Offers Another Taste of The Lovin' Spoonful 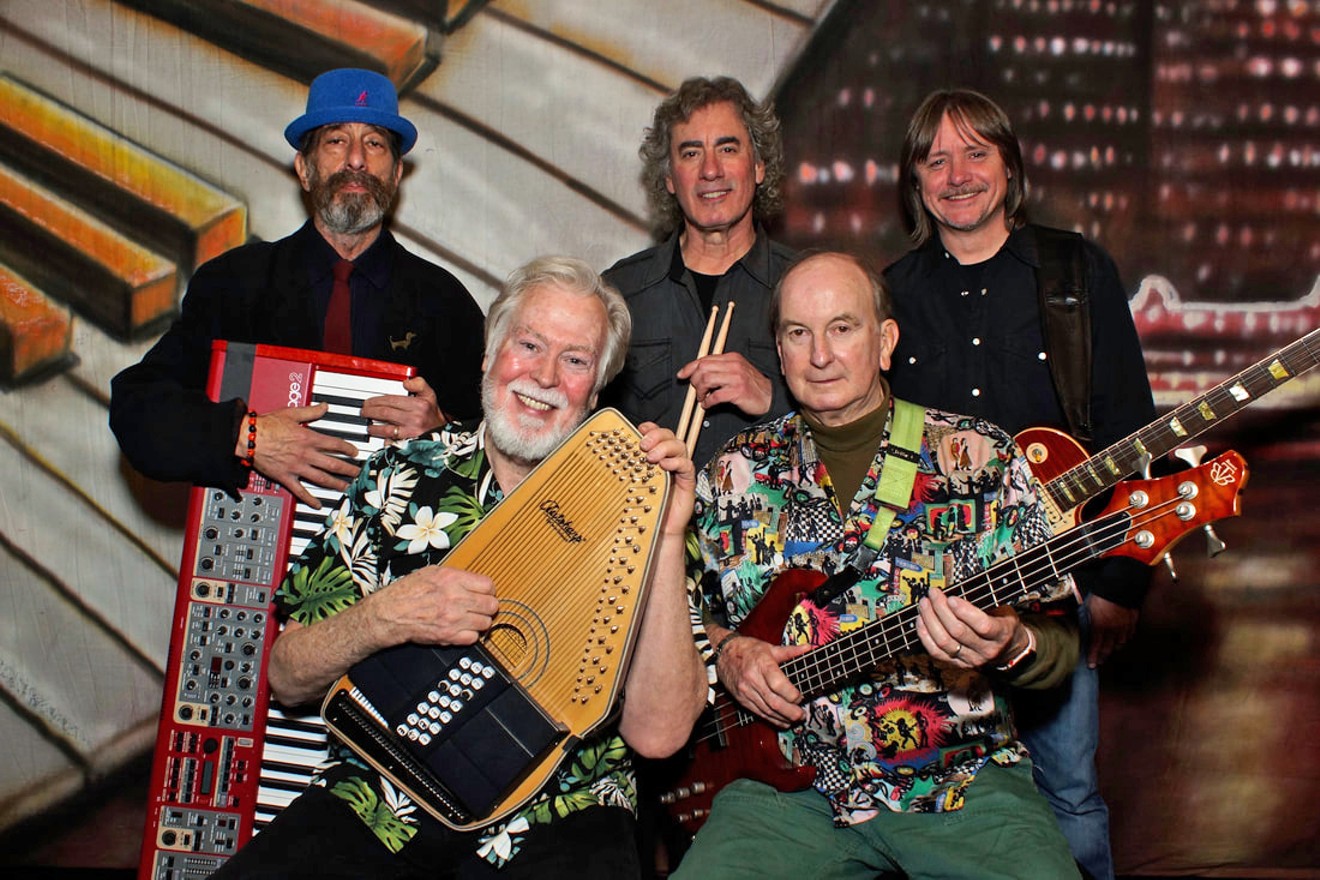 The Lovin' Spoonful today: (front row) Joe Butler, Steve Boone; (back row) Murray Weinstock, Mike Arturi and Phil Smith. Photo by Leon Volskis, courtesy of Steve Boone
It was the evening of August 23, 1966. In the bowels of New York's Shea Stadium - though only they knew it - the Beatles were preparing for what would likely be one of their final concerts in front of a paid audience. But instead of pacing the floor, the biggest band in the world were amiably visiting and chatting it up with one of their own favorite groups, The Lovin’ Spoonful.

The Spoonful themselves hadn’t planned on being backstage at all, but were taken there by security after fans spotted them in the general admission seats and began to cause a ruckus. And why not? At that very moment, The Lovin’ Spoonful had the #1 hit in the country with “Summer in the City.” 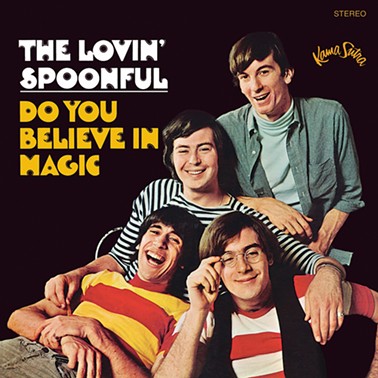 The Lovin' Spoonful's 1966 debut record; (clockwise from bottom left): Zal Yanovsky, Joe Butler, Steve Boone, and John Sebastian.
Kama Sutra album cover
“That was probably the most complex of all the writing we did, and it started as a song by John’s teenage brother Mark,” recalls Steve Boone, Spoonful bassist and one of the song’s co-writers. “They created a workable song and we went into the studio and worked on the arrangement from scratch.”

While most “summer” songs to date had extolled the virtues of the season, this one was a bit rougher. Its narrator with the grit on the back of his neck complaining about high temps as construction noises and car horns blared around him. Complaining that is, until he knows he can go up on a building roof with his girl where it’s a little cooler. And Boone’s distinctive piano riff is the song’s most recognizable musical part.

“John said we needed a middle section and he had heard me doodling on this piano part I couldn’t get out of my head, and we put it in,” he continues. “It ended up being the glue that held the song together. And our producer, Erik Jacobsen, doesn’t get the credit he’s due for working on our songs. He made them sound great on the radio.”

Those radio hits – including “Do You Believe in Magic?” “Daydream,” “Did You Ever Have to Make Up Your Mind?,” “You Didn’t Have to Be So Nice,” “Darling Be Home Soon,” and “Nashville Cats” – will likely be on the set list when Boone and the current edition of The Lovin’ Spoonful play as part of a ‘60s package show February 16 at the Stafford Centre. No one is more shocked that he’s still playing these songs more than 50 years later than Boone himself — and to so many age groups.

“At the shows today there’s definitely a multi-generational audience. And I mention to them that none of us ever thought it would last!” he laughs. “The contemporary opinion back in the day was once you turn 30, you got another job in the music business or a completely different career. You were done as a performer. But things like the Monterey Pop and Woodstock festivals broadened the audience, and the rules went out the window. There was no longer a timeline to being a rock star.”


The Lovin’ Spoonful were also rock stars at a time that they weren’t so much, uh, accepted by all tiers of society. In his entertaining memoir Hotter Than a Match Head (written with Tony Moss), Boone recalls a 1965 tour that paired his band with the Supremes on a tour of the deep south. One night after playing a college in Waxahachie, Texas, he got a lesson in how things were a bit different than up in New York. Beginning with the fact that at the segregated late night restaurant they went to, the Supremes and their backing band weren’t allowed inside. They had to order from the take-out window. And then things got worse.

“It was still pretty rare to wear your hair longer than your collar, especially in Texas,” Boone says today. “Some rednecks who had way too much to drink decided to pick on John, who was so blissed out in his pink striped shirt he didn’t know what was going on!”

Sebastian’s bandmates and some college kids who had been to the show tried to diffuse the situation, but it took the imposing entrance of the dozen-plus members of the tour’s all-black orchestra – led by a guy named “Big John” – to avert possible tragedy and whisk the Spoonful away before things got…hairy. 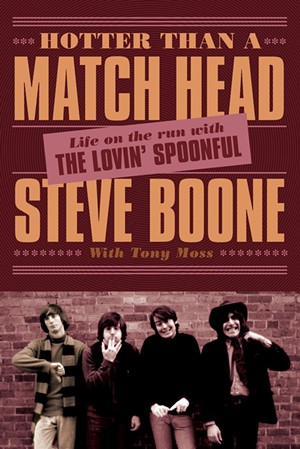 Steve Boone's 2014 memoir.
ECW Press book cover
The genesis of The Lovin’ Spoonful began with singer-guitarist-harmonica player John Sebastian and guitarist Zal Yanovsky. The pair were veterans of the New York/Greenwich Village folk rock scene, and had been in a group called the Mugwumps with singer Cass Elliott. She would later go on to join the Mamas and Papas, and their song “Creeque Alley” mentions the group and her former bandmates.

In 1965, Sebastian and Yanovsky decided to form a new band, calling it The Lovin’ Spoonful after a line in a blues song from Mississippi John Hurt—which actually refers to coffee, and not heroin or even semen as urban legend has dictated. Steve Boone (bass) and eventually Joe Butler (drums) rounded out the working lineup. They honed their act at the Night Owl Café and scored a record deal largely based on the strength of the demo for “Do You Believe in Magic?”

The Lovin’ Spoonful were even considered by two TV producers for the roles of a wacky rock group for a series they were developing. Though they’d have to change their name to…The Monkees. They did not pursue the gig.

After a couple of years, the familiar tale of creative, personal, and business differences began to fracture the group. Yanovsky was fired by his bandmates in 1967 for a variety of reasons and replaced with Jerry Yester. Boone was closest to Yanovsky of any member, and it hit him hard. Though he knows the highly-extroverted and often maniacally funny guitarist could rub people the wrong way.

“Zally was certainly the clown prince of our band, and that’s a very positive description from me. He was also the pure lightning rod in our stage show, who brought the excitement and entertainment,” Boone says. “But yes, his image sometimes got in the way of how people took him as a musician. He was very intuitive and really explored depths of guitar playing in making it sound like other instruments. He had fans in guys like Eric Clapton and George Harrison. In fact, Eric and Zally hung out a lot after Zally left.”

That was later followed by the departure of Sebastian, also the band’s primary songwriter. The Spoonful’s hippie credentials (at least on the West Coast) suffered after it was revealed that Boone and Yanovsky, after being busted for drug possession, briefly and against their will became police informants. The Spoonful were also seen as a singles band in a time of burgeoning album rock, their “good time music” no longer in vogue. The band limped into 1969, then dissolved.


The core four reunited for a concert segment in Paul Simon’s 1980 film One Trick Pony, and also for their induction into the Rock and Roll Hall of Fame in 2000. In 1991, Boone and Butler resuscitated the band with Yester and have been touring ever since. In a postscript, Boone fell in love with and married Yester’s daughter. Yester himself was ousted from the band in 2017 after being arrested on and pleading guilty to charges of child pornography, for possessing images of underaged girls on his computer.

The current lineup of the band includes Boone, Butler, Phil Smith (guitar), Mike Arturi (drums), and Murray Weinstock (keyboards). And while purists will grumble that front man Sebastian is no longer with them – perhps akin to seeing the 2019 versions of Grand Funk Railroad without Mark Farner or Styx without Dennis DeYoung – for much of the audience, it’s ultimately the power and attraction of the songs that supersedes the individuals who happen to be onstage playing them.

“John and I stay very close. He is the best rhythm guitar player I’ve ever worked with. In fact, I’m calling him right after I get off the phone with you,” Boone says. “He didn’t want to be touring with the whole band again. But yes, it is the power of the songs that really [carries], and that’s what the audience tunes in to. We were fortunate to have nine top 20 hits, and that’s a tribute to John’s writing. They’re clever and it’s good time music, which is our motto!”

“Stars of the Sixties” with The Lovin’ Spoonful, Shirley Alston Reeves (former lead singer of the Shirelles), and the Vogues is 7:30 p.m. February 16, at the Stafford Centre, 10505 Cash. $47-$89. Call 281-208-6900 or visit StaffordCentre.com
KEEP THE HOUSTON PRESS FREE... Since we started the Houston Press, it has been defined as the free, independent voice of Houston, and we'd like to keep it that way. With local media under siege, it's more important than ever for us to rally support behind funding our local journalism. You can help by participating in our "I Support" program, allowing us to keep offering readers access to our incisive coverage of local news, food and culture with no paywalls.
Make a one-time donation today for as little as $1.