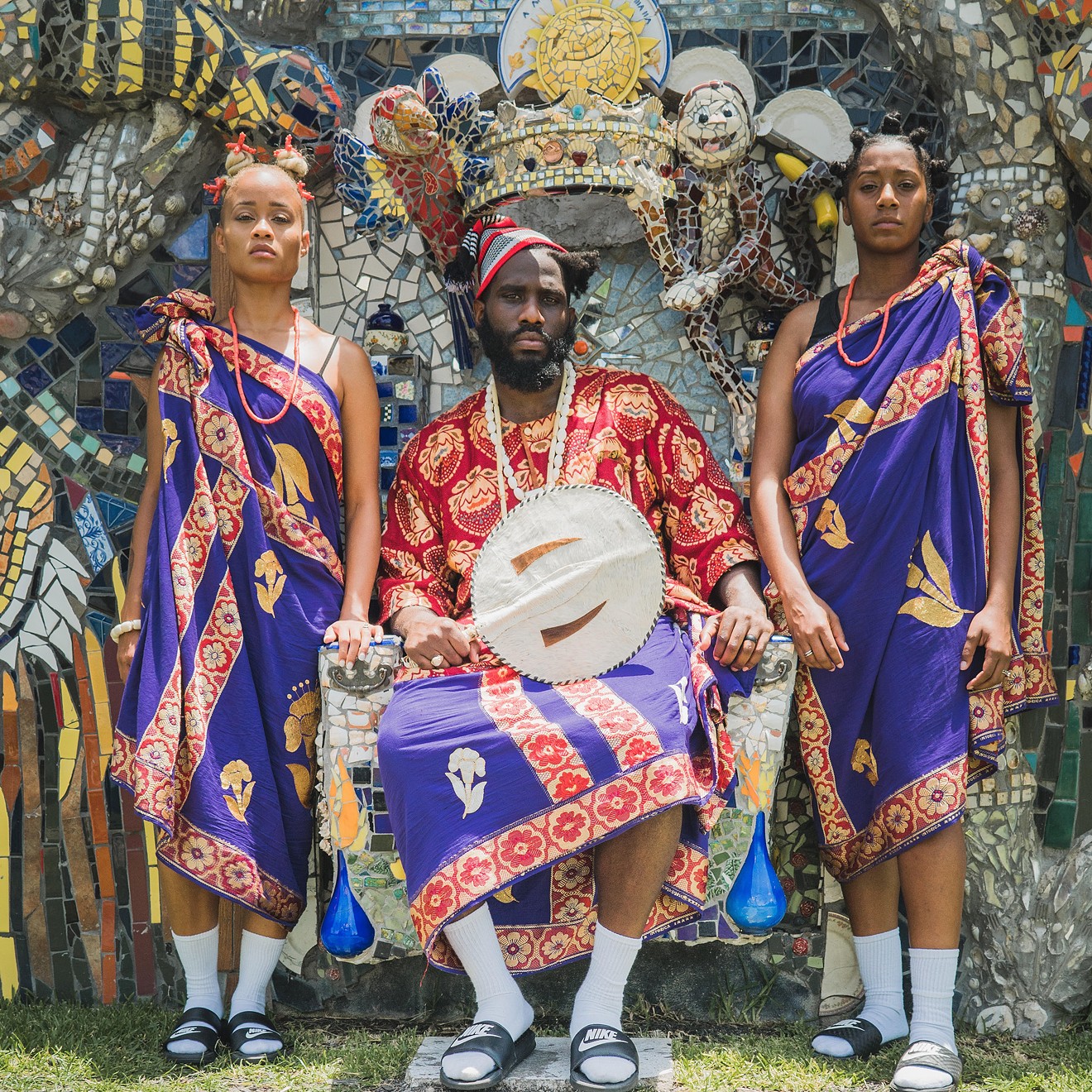 Fat, Tobe, & Nell in wardrobe for EWU. video shoot Photo by Zainob + Mathew Create
"Labels are calling us now," Jeff Idehen explains, "asking how we manage to put these videos out every week, "

Jeff is Tobe Nwigwe's childhood best friend. Though the pair would say they're brothers. Idehen, a Rice Business grad who quit a promising career in finance to work with Tobe full-time, is also Nwigwe's business partner and right-hand-man. Over the phone one evening, he explains in detail how Tobe and his wife, Fat, first began a weekly freestyle project called #GetTwistedSundays, and how that project morphed into the creative tour de force known as The Originals.

Back in the summer of 2016, a short-lived viral challenge called the "So Gone Challenge" hit the internet. The premise was to rap an original freestyle over the instrumentals of Monica's 2003 R&B hit, So Gone.

Spurred by friends and followers, an unknown Alief rapper with a gravely voice gave the challenge a shot and posted the video on Instagram. The response was overwhelmingly positive, so he decided to make freestyle videos a weekly event.

In that original video, Tobe's then girlfriend Fat, was twisting the rapper's hair while he freestyled. Showing early signs of their branding aptitude, the pair decided to add continuity to their weekly project by having Fat twist Tobe's hair in every video. Hence the name, Get Twisted Sundays.

Originally, the Get Twisted videos featured Tobe sitting on the floor rapping while Fat sat on a couch behind him twisting. As the weeks turned to months, the project evolved to add moving camera shots and professionally edited visuals. This would go on for a few months, with each week's Instagram video earning thousands of views.

The problem with the first weekly series was that Tobe became too popular. As his following grew, so too did the pressure to release his weekly tracks on streaming platforms. Unfortunately, Nwigwe could not oblige his fans as the videos featured him rapping over existing songs. Enter The Originals.


Tobe soon began collaborating with longtime friend and brilliant producer, LaNell Grant (aka Nell) to re-release all of his Get Twisted Sunday verses with original music on a weekly basis. The new songs would be released on all streaming platforms as well as Instagram and YouTube. The concept required a crazy amount of work, and basically became a full-time job; but it gets crazier. Not only are Tobe and Nell releasing original songs every week — songs with complex structures and sophisticated production — the team is also creating accompanying music videos for each track.

Every week the videos get more professional, more layered. Several of them feature the trio of Tobe, Fat, and Nell in bespoke clothing designed by Tobe himself; clothing inspired by Nwigwe's Nigerian roots. Many also include original choreography and feature accompanying artists like Tim Woods, Luke Whitney, and David Michael Wyatt.

The scope of what this creative team is achieving on a weekly basis cannot be understated. It should come as no surprise then, that label executives are calling Jeff and Tobe up trying to understand how this is all possible.


The most recent iteration of The Originals project has been particularly well received. It may have even gone viral. The completely original song titled, "I'm Dope", is Tobe's letter of appreciation to both Erykah Badu and Dave Chappelle. Two of the rapper's creative icons who have reached out to him in recent months to share their admiration of his work. The video for the song, which was filmed in Houston's downtown art installation, "Open House", was shared by Badu on Instagram and reached 50,000 YouTube views nearly overnight.

After months of consistent output from Tobe and his squad, the team will finally be taking a brief intermission from the Originals project to focus on Tobe's upcoming show at White Oak Music Hall later this month. After which, they plan on returning to the impossible task of creating and releasing new singles and music videos every week.

Tobe performs at at 6:30 p.m. August 19 at White Oak Music Hall, 2915 North Main.Tickets start at $25
KEEP THE HOUSTON PRESS FREE... Since we started the Houston Press, it has been defined as the free, independent voice of Houston, and we'd like to keep it that way. With local media under siege, it's more important than ever for us to rally support behind funding our local journalism. You can help by participating in our "I Support" program, allowing us to keep offering readers access to our incisive coverage of local news, food and culture with no paywalls.
Make a one-time donation today for as little as $1.