Tune-Yards' Merrill Garbus and the Importance of Joie de Vivre 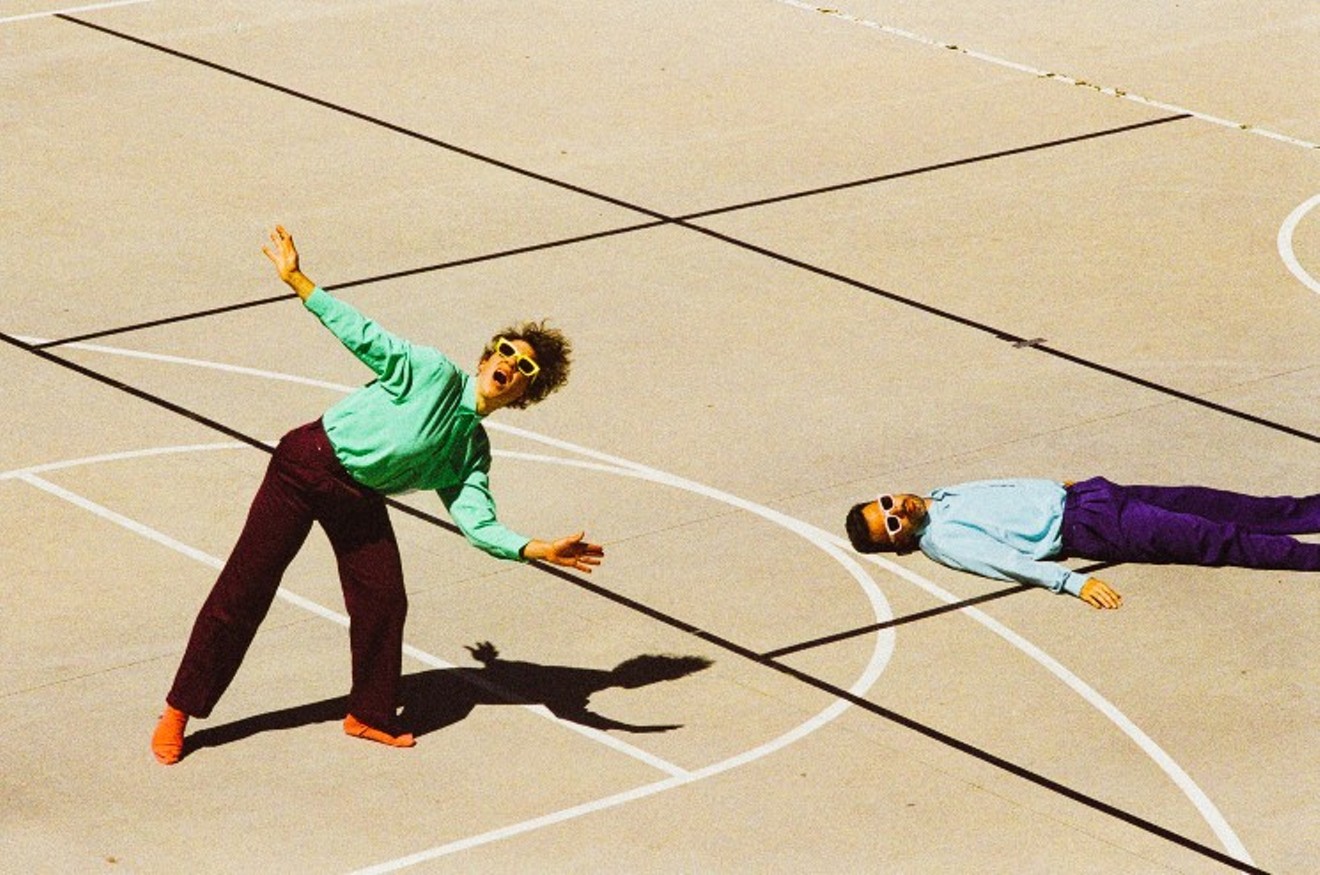 There might be a model for the sort of live show Merrill Garbus hopes to deliver to Tune-Yards fans anytime the band takes the stage.

“If you want creativity, just go to a huge Rolling Stones arena show. That’s the type of energy we’d like to infuse in every small club show that we do,” she said.

That combination of inventiveness and vitality is the Tune-Yards blueprint, whether on record, as with its latest, critically-hailed album, sketchy., or in live performances we’ve seen from the Oakland-based band in the past. Garbus is aware the shows on Tune-Yards' latest tour, which begins this week and includes at stop at White Oak Music Hall on Friday, August 13, might be unlike any others she and bandmate Nate Brenner have ever played.

“I think they’ve gotta be different, right? We’ve been rehearsing and I’ve been thinking, ‘Oh my goodness, we haven’t done this in a while,’ and I feel so excited, I feel like I might just explode from being able to perform and have people there in the room. I hope that we’re at a place where we won’t take this for granted and I’m speaking for myself and also the audiences, too. I’m imagining that we’re all going to feel really grateful to be experiencing live music again,” Garbus said by phone just ahead of the tour’s start.

“I mean, I’m trepidatious. I think we’re all just wanting to be extremely careful, etcetera” she added, with a nod to COVID concerns. “I don’t know, it looks like we’re going to be dealing with this thing for a long time. We need to try to just get back to why we want to be alive. That’s what I’m trying to get back to, remembering the joy of music and of living life.”

Garbus’ commitment to her own joie de vivre is a prevalent theme in our discussion. She views it as necessary to facilitating the change she wants to see in the world. That notion sets the framework for the new album, which is sonically jazzy and buoyant, while many of its 11 tracks thematically call for the bravery needed to correct some past missteps. There’s literally a track titled “make it right.” on the album. Climate change, gentrification, white privilege and a resurgence in legislative control over women’s rights are all addressed.


One of the best songs on the album — and, maybe of the year — is “hold yourself,” a hard-hitting examination of parenthood today. Telling lines like “They held us close and dear and told us lies they’ve been telling themselves for years” resonate with parents of children facing seemingly more uncertainty than ever. We asked Garbus what inspired the song.

“You know, it came from needing to hear it myself and Nate and I going through our own private process of trying to figure out whether to have kids and how to have kids in this world and not pretend that the world is a different place than it is,” she said. “I think it’s the bravest thing to be a parent, if I’m honest. And my poor parents, I told them not to take it personally because it’s not personal. It’s based on a lot of a feeling, just a lot of sadness that the generation before mine, my parents’ generation, that they weren’t able to change things. They weren’t able to make headway on climate change when they actually knew all the information back when I was born in 1979. Just a lot of sadness.

“And then, also, we’ve got to be here every day and live life and how do we do that? For me, as a songwriter, I thought well, what’s the song that I need right now in order to help me through these times?”

The band promoted the album with TV appearances this spring including an enthralling performance of “hold yourself.” on The Late Show with Stephen Colbert, a presentation so fascinating it seemed to have taken the show’s host aback. We asked Garbus how that piece came together.

“All of this year has been such a different way of doing things than ever before but we had to take all these COVID precautions and what we decided was to pre-tape a whole bunch of potential TV and radio things. So, we got the band tested, we got the crew tested, we got everyone feeling safe enough and then we worked with my friend Maureen Towey, who is just a brilliant director of visuals.”

The segment perfectly mirrors the song’s lyrics. As she emerges from a womb of sorts, Garbus takes rocky baby steps towards holding herself up, accountable, to a higher standard.

“Some of those dance moves are based on Gaga dance, which I started taking some classes in, and it’s really a way to learn what your body wants to do and the ability to be uninhibited and silly and work from a place of pleasure. So that felt like this appropriate way of moving, trying to find a pleasurable movement through very uncomfortable steps.

“The idea for the bean bags just felt like the right thing, especially we’re all stuck at home and this idea that you’d be comfortable enclosed at home but so comfortable that you’re kind of suffocating there. We had the concept of the bean bags and then we ran with it from there.”

That performance might also serve as a good starting place for anyone new to Tune-Yards because it illustrates the band's trademark balance between whimsy and sobriety. Each step Garbus takes in the performance has a foot on one side or the other.

“I hope it’s a good balance. We’ve been working on this TV show, a little video series that accompanies the album, and I think I’m the one that wants to make sure that the gravitas is there and then Nate’s been really good at reminding me that there’s a lot right now that has gravitas and maybe what people need from music and entertainment is entertainment,” Garbus said.

“Joanna Macy, who is this brilliant woman who I end up quoting in the last episode, her voice and her words are featured, she’s talking about like, if we’re not glad to be here on this planet then what hope do we have of trying to save it, or save ourselves? I think that’s a true line for a lot of my favorite thinkers these days who are saying when we feel connected and invested to being alive here on this planet then we want to do stuff not to try to leave it and not to try to numb out and pretend we’re not here. How do we stay in reality? I think it’s just surprising me how actually my answer to that question is right, we laugh and we dance and we find pleasure in things."

Garbus said that approach is key to doing the work she finds important. She’s been exploring issues that take true self-examination and can’t be wiped away with a “Welcome Mitt” (see sketchy.TV episode four for more info!)


“Especially doing work on whiteness and being a white privileged person, I think for a long time I thought the answer is to punish myself and to feel really bad because that kind of feels more appropriate as an answer. And instead to hear myself saying well, if I’m going to stay in this for the rest of my life, this work of trying to make things better, I’ve gotta be alive and I have to be able to be myself, my full self, and really want more from this life.”

Garbus wants that for Tune-Yards fans, too, anyone headed to the shows this tour. We ask about her earliest recollections of being a young artist, maybe as a finger-painting pre-schooler or a kindergartener with a knack for macaroni art, but she anticipated a different question.

“That’s funny, I thought you were going to ask what performances can I remember taking in and I was going to say Rolling Stones, Steel Wheels Tour, 1989.”

Garbus as a fan of Mick and Keef? That seemed unexpected.

“I was ten years old. My dad is, was, more of a big Stones fan. I went with him and my uncle. And then I was a puppeteer. So, if you combine Steel Wheels Tour 1989 with being a puppeteer,” she said of the perfect live show and what it should do. “There is an inherent playfulness to creating this magic world, getting people to believe in a magic world and taking them to a different place.”