Peter Yarrow on the Promise of Folk Music - Then and Now 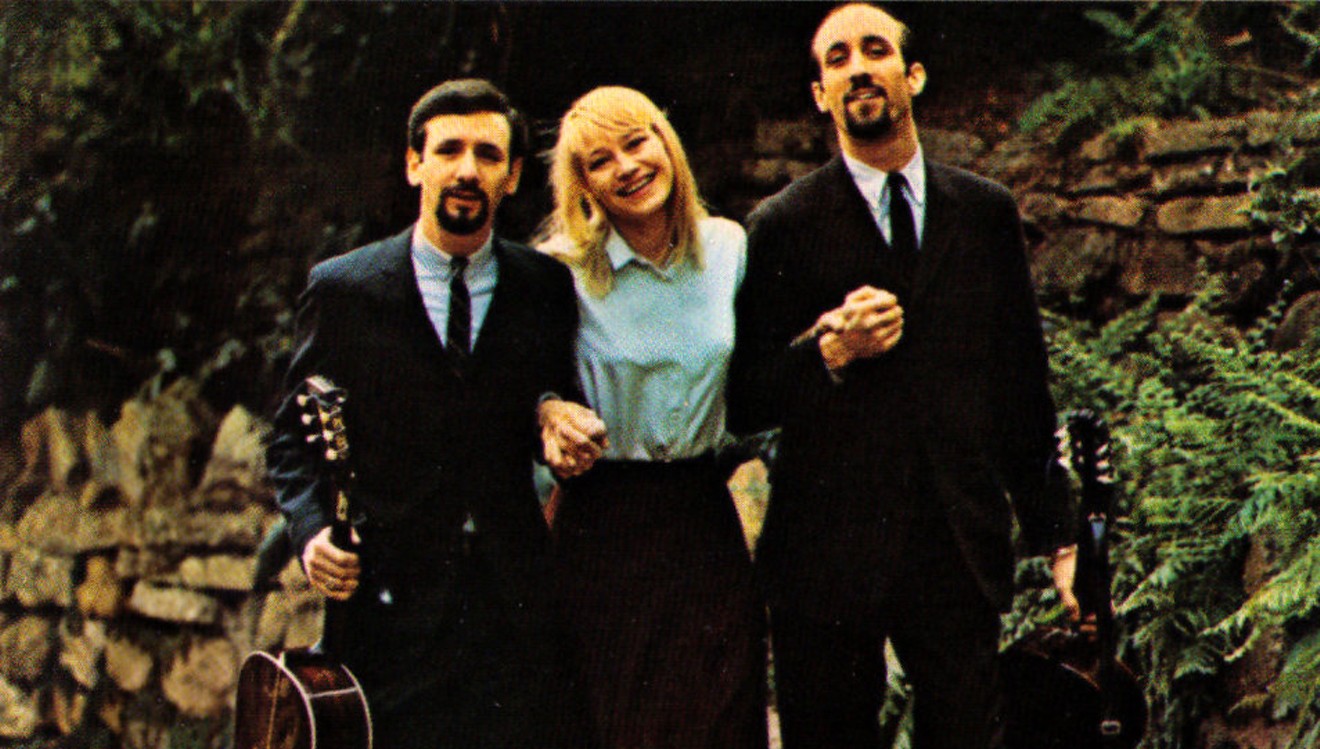 Peter Yarrow, Mary Travers, and Noel "Paul" Stookey Detail from cover of 1963 Warner Records album "In The Wind."
During the folk music revival of the early 1960s – which saw both older performers rediscovered and new ones step to the forefront of the genre – there was no bigger or more important venue than the Newport Folk Festival. And there were few acts with both the critical and commercial cache as Peter, Paul and Mary.

A new DVD available next month, Peter, Paul and Mary at Newport 1963-65 (Shout! Factory) puts together in one package clips of a total of 20 songs the trio performed, while a companion CD has 19 full tracks. Both from their own catalog and well known covers (“If I Had A Hammer,” “Blowin’ In the Wind,” “Early in the Morning”) to other standards (“Wasn’t That A Time,” “Jesus Met the Woman at the Well,” “Because All Men Are Brothers”). Some of the footage – shot in black and white by documentarian Murray Lerner – has never been released commercially before, and was previously a PBS pledge drive special.

Shout! Factory CD cover
For Peter Yarrow – member of the storied trio along with Mary Travers and Noel “Paul” Stookey – the main stage and smaller workshops of Newport represented something far bigger than just another music festival.

“I viewed it then as something that would have some real impact on the world. My vision was really framed in terms of the good that it could do by virtue of the fact that it was really the hallmark of what folk music was about,” he says today. “It was a huge event in terms of significance in announcing a way of life that was pursued via the kind of mentality that Pete Seeger and the Weavers had.”

Folk music, he adds, was not simply a way of sharing an entertaining and engaging art form, but an expression of a way of life that had at its core humanity and caring and striving for fairness and equity.

“People didn’t make money from it. It was written from the hearts of people and they wanted these stories told about their aspirations and dreams,” he continues. “Folk music was an outlet for people to share the urgencies of their lives.”

And while it’s not mentioned on this DVD, it was a flustered Yarrow who had to calm an angry crowd in 1965 when “Bob Dylan went electric” (though how angry the crowd was and what for has been in debate for 50+ years). Leaving the stage with his electric band after just three numbers, Dylan came back out for two more numbers after Yarrow told the crowd “Bobby has gone to get his acoustic guitar!” It’s captured on the 2007 DVD The Other Side of the Mirror: Bob Dylan at the Newport Folk Festival 1963-65.

“When Bob Dylan went electric, the place went crazy with a feeling of betrayal,” Yarrow says. “[Folk music] was an act of faith, and act of acknowledgement of a certain kind of belief system. And some people saw [Dylan’s move] as copping out for materialism.”


And while Dylan went to the Dark Side of Rock, Yarrow has been consistent in his belief in the power of folk music to both entertain and teach about issues, as well as how we deal with them as humans. With more involvement than just singing a set of lyrics, no matter how earnest.

“The idea – as Mary used to say – ‘if you’re going to sing me, you have to live me.’ The heart of what folk music had to say was a force to bring a kind of humanity to the world,” he says. “In the ‘60s, it was a greening of America, the kind of a new consciousness and breaking of traditions like racism, misogyny, and hyper-materialism and hierarchy of people and their meaning based on their wealth. We felt that needed to go!”

Today, the 81-year-old Peter Yarrow still performs solo shows, and tours occasionally with the similarly-aged Noel Stookey (Mary Travers passed away in 2009 from leukemia and medical complications). He also works on various progressive programs and projects, including about different sides of the political spectrum gathering to discuss their differences called Better Angels (“I want 100 million people to see it!” he says).

And lest you think he’s just an old folkie/hippie just spouting tales of peace, love, brotherhood, and Puff, the Magic Dragon (the song which is likely Yarrow’s most enduring legacy), he has a lot to say about issues of politics and society today. A lot.

“If we keep going in this direction, it will be a world that runs on fear. Like North Korea, very Orwellian,” he says – in a very distilled distillation. “Right now in Atlanta, people are protesting against ICE because what ICE is doing and He-Who-Shall-Not-Be-Named is promulgating the fear…that people of color are invading!”
KEEP THE HOUSTON PRESS FREE... Since we started the Houston Press, it has been defined as the free, independent voice of Houston, and we'd like to keep it that way. With local media under siege, it's more important than ever for us to rally support behind funding our local journalism. You can help by participating in our "I Support" program, allowing us to keep offering readers access to our incisive coverage of local news, food and culture with no paywalls.
Make a one-time donation today for as little as $1.