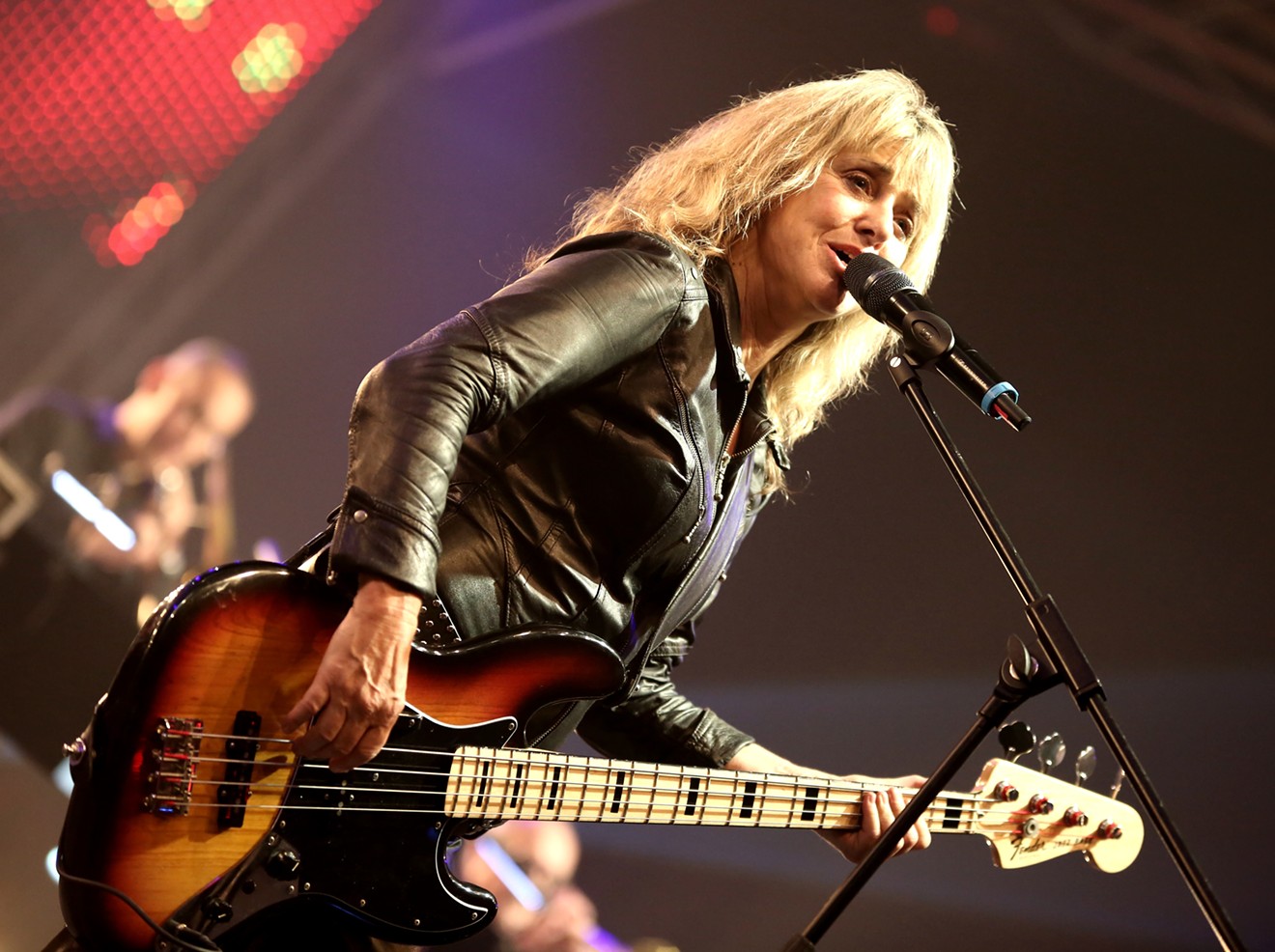 Suzi Quatro onstage in 2019. Photo by Liam Firmager/Courtesy of Sicily Publicity
In the mid 1970s, she was a pioneering female rocker at a time when that term was nearly nonexistent, a hugely popular record and concert attraction, and a style icon. That is…in much of the non-U.S. world.

Here in her own home country, the singer/bassist born and bred in tough Detroit, Michigan is best known for her collaborations with two men: Chris Norman on the 1979 No. 4 soft rock “Stumblin’ In,” and with one Arthur Fonzarelli on seven episodes of the TV show Happy Days around the same time. 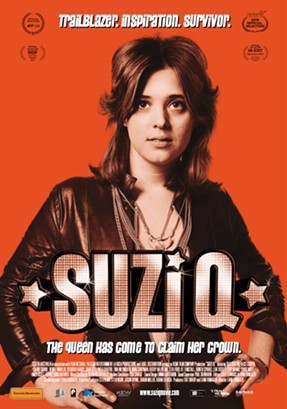 Poster art
But the story of Suzi Quatro encompasses a whole lot of music – and much outside of it as well: gender, family, the music biz, success, dreams achieved and expectations dashed. She and her 55-year career are the subject of the new documentary Suzi Q.

Due to the pandemic, a theatrical release has been scuttled, but there will be a July 1 online viewing party and live Q&A with Quatro moderated by Kathy Valentine (the Go-Go’s) and Cherie Currie (the Runaways) before a July 3 release on home video and VOD.

An aborted previous documentary on Quatro has remained unreleased due to the second thoughts of a prominent interview subject. So Quatro had been through the process before meeting with Suzie Q director Liam Firmager in 2015. She says she wanted a “warts and all” depiction, and would only edit out anything that “didn’t happen” – though anybody’s opinions were fine.

“He told me right away that he wasn’t a fan, which was an interesting way to break the ice!” Quatro laughs from her home in England. “But he said he loved the music. And he saw me on a talk show and I fascinated him. So I knew he would be objective, not a kiss ass, and honest with me. There’s a lot of lovely things said about me, but there’s also plenty of cringe-worthy moments left in there. There’s a rawness, a vulnerability and a realness to it.”

The documentary unfolds Quatro’s story from her teen years in bands with her sisters, to her move to England and musical collaborations with songwriters/producers Nicky Chinn and Mike Chapman, the debut of her trademark onstage black leather cat suit (inspired by the ‘60s sci-fi film Barbarella) and the mania of her ‘70s commercial peak and diverse tales of later decades. Her hits included "Can the Can," "48 Crash," "Daytona Demon," "Devil Gate Drive," "The Wild One," and "Your Mamma Won't Like Me."


Throughout are extensive videos and concert clips, photos, contemporary and archival interviews with Quatro. And an A-list of talking head admirers including Joan Jett, Kathy Valentine of the Go-Go’s, Donita Sparks of L7, Cherie Currie and Lita Ford of the Runaways, Blondie’s Debby Harry and Clem Burke, the Talking Heads’ Chris Frantz and Tina Weymouth. There’s early supporter Alice Cooper, who chose Quatro as the opening act to his massive “Welcome to My Nightmare” tour. Even the Fonz himself, Henry Winkler, makes a surprising and welcome cameo.

The film is not without its personal drama and pathos. The drama comes in the appearances of Quatro’s sisters Patti and Nancy. And when Suzi is cross-interviewed, decades of jealousy and resentment and passive-aggressiveness come charging forward. Suzi Quatro (vocals/bass) and her band (clockwise from left): Dave Neal (drums), Len Tuckey (guitar), and Alastair MacKenzie (keyboads). She and Tuckey were married from 1976-1992 and have two children together.
Photo by Roger Gould/Courtesy of Sicily Publicity
After playing together in the 1960s garage punk band the Pleasure Seekers with Patti and Arlene, and later the harder rocking Cradle with Patti and Nancy, successful English producer Mickie Most offered a contract and a chance to move to London – for Suzi only.

Patty and Nancy resented that Suzi didn’t fight or insist for them to be included. And it still chaps them nearly 50 years later as they make passive-aggressive comments while citing Suzi’s need for fan worship.

On her end, Suzi maintains any sort of validation, praise, or “atta girl” from her sisters or father were never forthcoming, which hurt.

In the film, Suzi plays a cassette tape that her family made for her at Thanksgiving dinner one year when she couldn’t make it home to Detroit – complete with the family denigrating her musicianship. Suzi remembers she was 36 years old and starring in the musical Annie Get Your Gun before receiving her father’s first – and possibly only – verbal stamp of approval.

As the documentary clarifies (and Quatro reiterates on the phone), she was not aware for more than three months that she was offered a solo deal twice in one week – from Elektra Records Jac Holzman and producer Mickie Most.

Both were interested in the then-teenaged Quatro only as a solo act. She says only after Cradle started to break up – and on the advice of supportive oldest sister Arlene – did she find out about and pursue the solo offer.

“I almost missed the chance. And it was morally incorrect not to tell me. Mickie told my brother Michael that he didn’t want to break up a family band. If the [situation was reversed] I would have applauded and said ‘Go!’ I would have found another route for myself.”


Then there’s the fact that while she sold millions of records and sold out large concert venues in Europe, Australia, and Japan, appeared on every TV show, and showed up in scores of magazines and newspapers, she never come close to that level of success here.

Reasons abound as to why Suzi Quatro never broke big in the United States. As a female rocker, she was just a few years ahead of the curve, but definitely kicked the door open for others. She didn’t have the radio airplay and hit singles she did in the non-U.S. world. And she was unfairly lobbed in with an English glam rock scene with bands like Sweet and T. Rex and Slade that never really translated to these shores.

Quatro readily admits it was her appearances acting and singing as Leather Tuscadero on Happy Days that really upped her profile in the United States. As the doc explains, producer Garry Marshall even offered Quatro her own spin off series for the character, but she declined due to fears of typecasting. And while her music and interviews never really made mention of gender or feminism, it’s clear from her long list of admirers they felt differently.

Suzi Quatro steps out of her trademark black leather catsuit for a golden one in 1974.
Photo by Roger Gould/Courtesy of Sicily Publicity
“I didn’t open the door on purpose, but I did. And I didn’t realize until this film was made that what I did inadvertently was give these women who didn’t fit in anywhere some place to survive,” Quatro offers. “I’m happy about that. And I’ll take that wonderful legacy to my grave.”

Joan Jett was such an avowed Quatro fan and such a slavish imitator in look and stage manner that her Runaways bandmates asked her to tone it down. The fact that she went on to huge success had to sting Quatro more than a bit, and Quatro says onscreen that many people have come up to her, mistaking Jett and/or her music for her own.

In recent decades and up to today, the now 70-year-old Suzi Quatro continues to perform for original and new fans around the world. She’s also got side hustles as a memoirist (Unzipped), poet (Through My Eyes), DJ, TV guest star, and headliner in musical theater (Annie Get Your Gun and Tallulah – the latter of which she co-wrote).

Even in quarantine, she’s pretty damn busy: making new music with her son for an upcoming album in her home studio, preparing a coffee table illustrated lyric book, uploading 50 of her bass lines to YouTube, and performing online “Sunday Specials” playing the piano. And then there’s the movie script of her life expected to be finished by mid-July.

“I am unashamedly an artiste. I love creation. And even though the rock and roll stage is my most natural habitat, I knew I would branch out. And I do what I love,” she says. “It’s all the same thing. It’s all communicating and entertaining. And with this documentary, I know America will rediscover me. I still sing, I still play bass, and at 70 years old, I still kick ass ”

For information on the July 1 screening and live Q&A of Suzi Q, visit Altavod.com/movies/suzi-q

For information on the documentary, visit SuziQMovie.com
KEEP THE HOUSTON PRESS FREE... Since we started the Houston Press, it has been defined as the free, independent voice of Houston, and we'd like to keep it that way. With local media under siege, it's more important than ever for us to rally support behind funding our local journalism. You can help by participating in our "I Support" program, allowing us to keep offering readers access to our incisive coverage of local news, food and culture with no paywalls.
Make a one-time donation today for as little as $1.