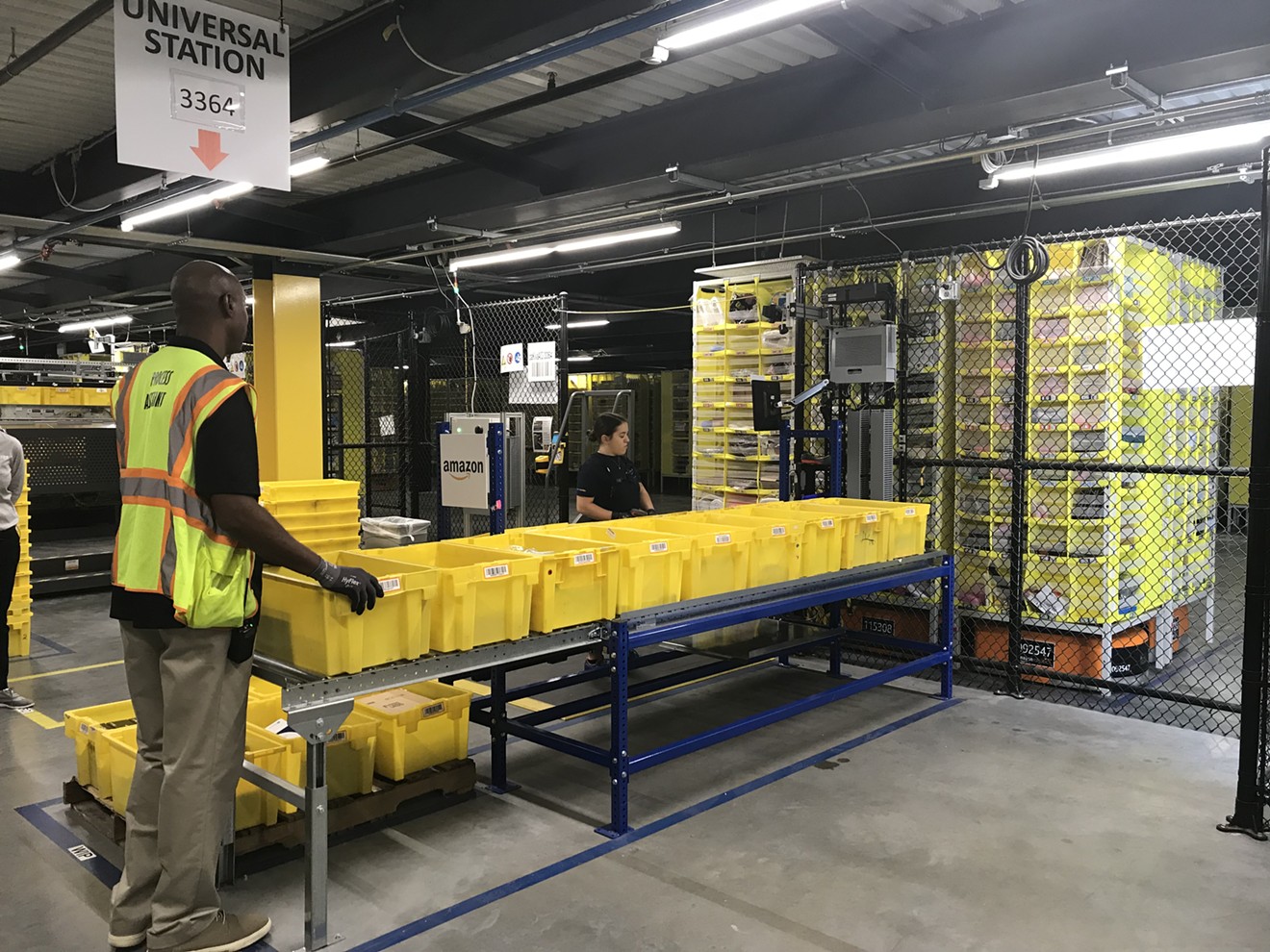 Human and machine meet to stock the yellow towers. Photo by Cory Garcia
Houston, being the size that it is, is no stranger to business expansion. It’s likely that there’s not a single week that goes by in the city that at least a few businesses upgrade their facilities or open new outposts as their business continues to grow. What is rarer in this business landscape is an expansion so big and important that Governor Greg Abbott comes to Houston to see it for himself.

But Amazon is no ordinary business, which means that to celebrate the opening of their new robotics fulfillment center — dubbed HOU2, as seen on many of the shirts that workers were wearing — the governor was in town to take in the site and say a few words. “Thank you, Amazon for what you’re doing to ensure we have the best workforce in the United States,” he said in a press conference, in reference not to just HOU2 but the multiple Amazon fulfillment centers across the state.

If you’re wondering how “workforce” and “robotics” jibe, while robots and automation play a big part in how Amazon gets goods from manufacturers and to your home, there are plenty of humans involved in the process. According to a press release, Amazon has created more than 3,500 full-time jobs in Harris County. After hearing remarks from the governor and others, the media got to tour the new facility and see how it works.

While I didn’t see a single bathroom on the tour — I assume they exist, I’m just saying that I didn’t happen to see one — I did get to see plenty of nifty robot action and find out where humans are still a necessary part of the process. The most impressive bits of the technology is where the robots they use to find the containers holding items that need to be shipped out. They’re orange circles that look like Roombas on steroids, and they can hold up to 700 pounds while moving at five feet per second.

While they can go out into the rows upon rows of mobile towers of goods to find precisely the item that is needed, they can’t remove or add items themselves. That’s where the “associates” come in, those humans tasked with picking items, scanning them, and sending them down the line or with replacing empty spaces in the containers with new items to be purchased. This fulfillment carries a little bit of everything, but it’s Echo Dots and cell phone cases that are the biggest movers.

Humans still do the boxing and the quality control when the scanners pick up irregularities in the packaging. But after that it’s off to a conveyor — there are 26 miles of conveyor in the building, which is the size of 14 football fields —that sorts the shipments by company. In a way, the computer logistics are staggering; for every order, the system has to figure out which fulfillment center with the item ordered can get the order to the customer in the required shipping time. Sounds simple when you’re ordering the last minute birthday present, but seeing it play out in real time drives home just how hard the work can be for the humans involved in the process.

Amazon might feel like magic, but at the end of the it’s the result of hard human labor, strong robots, and a robust computer network. HOU2 is the present, and it feels like only a matter of time before HOU3 becomes a thing.
KEEP THE HOUSTON PRESS FREE... Since we started the Houston Press, it has been defined as the free, independent voice of Houston, and we'd like to keep it that way. With local media under siege, it's more important than ever for us to rally support behind funding our local journalism. You can help by participating in our "I Support" program, allowing us to keep offering readers access to our incisive coverage of local news, food and culture with no paywalls.
Make a one-time donation today for as little as $1.