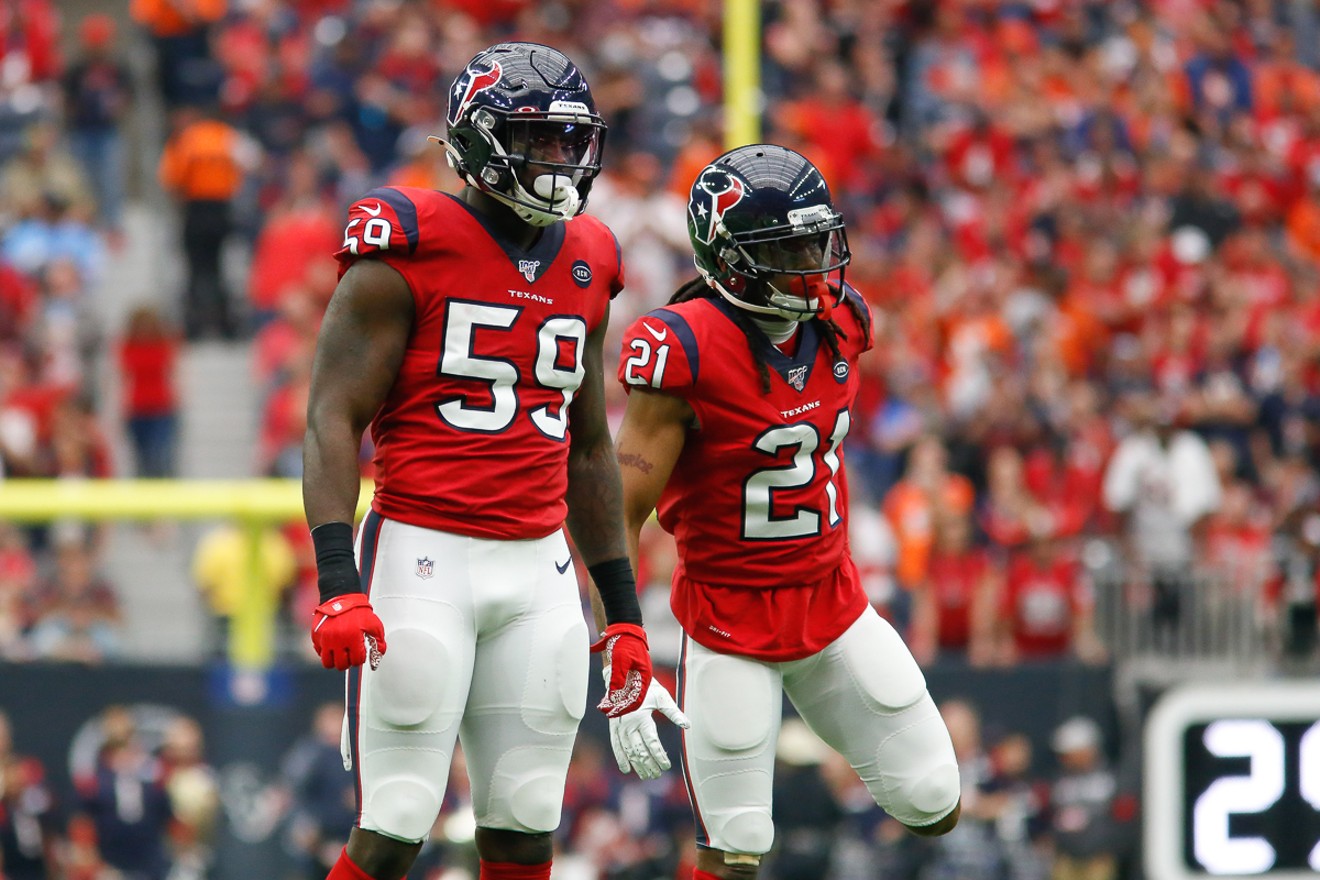 The Texans will need a better effort from their defense to beat Tennessee on Sunday. Photo by Eric Sauseda
For the Houston Texans, Sunday's game against the Titans in Nashville is massive, with both teams sitting at 8-5, and with another matchup on the schedule in two weeks to close out the season at NRG Stadium. Six weeks into the season, it certainly didn't look like we would be treating these Titans games as an urgent head-to-head matter.

Six weeks into the season, the Titans were reeling, sitting at 2-4, and coming off a 16-0 shutout loss to the Denver Broncos. Meanwhile, the Texans were coming off the biggest road win of the Bill O'Brien Era, a 31-24 defeat of the Kansas City Chiefs. The two teams could not have been going in a more opposite direction — the Texans, all of a sudden, felt the twinge of Super Bowl hopes, and the Titans felt the gravitational pull of last place.

Then, Titans head coach Mike Vrabel made the decision to bench quarterback Marcus Mariota, and replace him with veteran Ryan Tannehill, and that has made all the difference. The Titans have gone 6-1 with Tannehill as the starter, the Titans have exceeded 30 points on offense in each of their last four games, and now they sit tied with the Texans at 8-5.

The game kicks off at noon on Sunday, so let's give you a few things to watch for....

4. Bounce back (again)
Deshaun Watson was actually asked the question in his Wednesday press conference about why the Texans have been so good coming off of losses, and have not handled the follow up to wins exceptionally well (with the past two Sundays being the glaring example of this trend), and he took some exception to it, saying that each game is its own entity and that there's really no carryover one way or the other. The pattern, though, is undeniable. The Texans have gone in a loss-win-win pattern all season long. Four times they've gone "loss-win-win" and last Sunday, the loss to Denver was the next logical entry on the ledger. So, the good news is that the Texans SHOULD win the next two games, if you believe in this trend. (Week 17 might be a bit harrowing, though.) The other bit of good news was delved into on Wednesday in this space, in which we outlined that Bill O'Brien's teams have been very good coming off of double digit margin losses (provided the playoffs are still mathematical possibility, which obviously they are) — 10-1 overall, and 8-2-1 ATS. The Texans need these bounce back trends to hold up in what will surely be a raucous and chilly Sunday afternoon in Nashville.

3. Will Fuller's hamstring
The O'Brien press conferences this week were interesting. On Monday, he was particularly playful for a head coach coming off a game in which he was trailing a 4-8 team by 35 at home the day before. Then on Wednesday, he had a far more somber tone. If it was a football issue causing said tone, my fear is that it's the health of Will Fuller's hamstring, which caused the fourth year wide receiver to miss the Broncos game on Sunday, making that four full games (plus most of the loss to the Colts) that he's missed this season. The Texans' record when Fuller, Watson, and DeAndre Hopkins are all in the lineup together is 13-7, and that includes the Colts game in which he played just a handful of snaps. In the five games that Fuller has missed all or most of this season, the Texans are 2-3, with a point differential of -29. For what it's worth, when O'Brien was asked on Wednesday about Fuller's status, he gave a very curt "I don't know." Today's injury report will be crucial — in Week 13, when he played against New England, Fuller was "Limited Participation" status all week and then "Full Participation" on Friday, while last week before Denver, he was "Limited Participation" all week, INCLUDING Friday. So, yeah, today is big.

2. First drive blues
Another week, another failed first drive. Here are the numbers.....

They’re getting closer and closer to 3 yards per play! WHOOPEE!!!

Horrific, and made even worse after it was brought to my attention that the Texans have not scored a touchdown on an opening drive since Week 9 OF THE 2018 SEASON! Including the playoff loss to the Colts, that is 21 STRAIGHT GAMES without scoring a touchdown on the first drive. That's a direct reflection on the head coach and offensive coordinator, and those people are the same person, and his name is Bill O'Brien.

1. Ryan Tannehill, Titans' play action
Coming into the season, Tannehill was a guy making the transition from "overpaid starter" in Miami to "frisky backup" in Tennessee, an oft-injured 42-46 washout as a starter, hoping to resurrect his career. Well, resurrect it, he has, and a big part of it has been his efficiency off of play action (with a special tip of the cap to 1,200 yard rusher Derrick Henry).....

The Texans' defense was torn up last week by rookie Drew Lock off play action....


And yet, I am going to say that "the trend is our friend," and pick the Texans.

THIS WEEKEND'S BEST BETS
Buccaneers -3.5 over LIONS
CHIEFS -9.5 over Broncos
Seahawks -6 over PANTHERS
RAIDERS -6.5 over Jaguars
CARDINALS +2.5 over Browns
COWBOYS +1 over Rams