Reviews For The Easily Distracted: The Man Who Killed Hitler and Then The Bigfoot 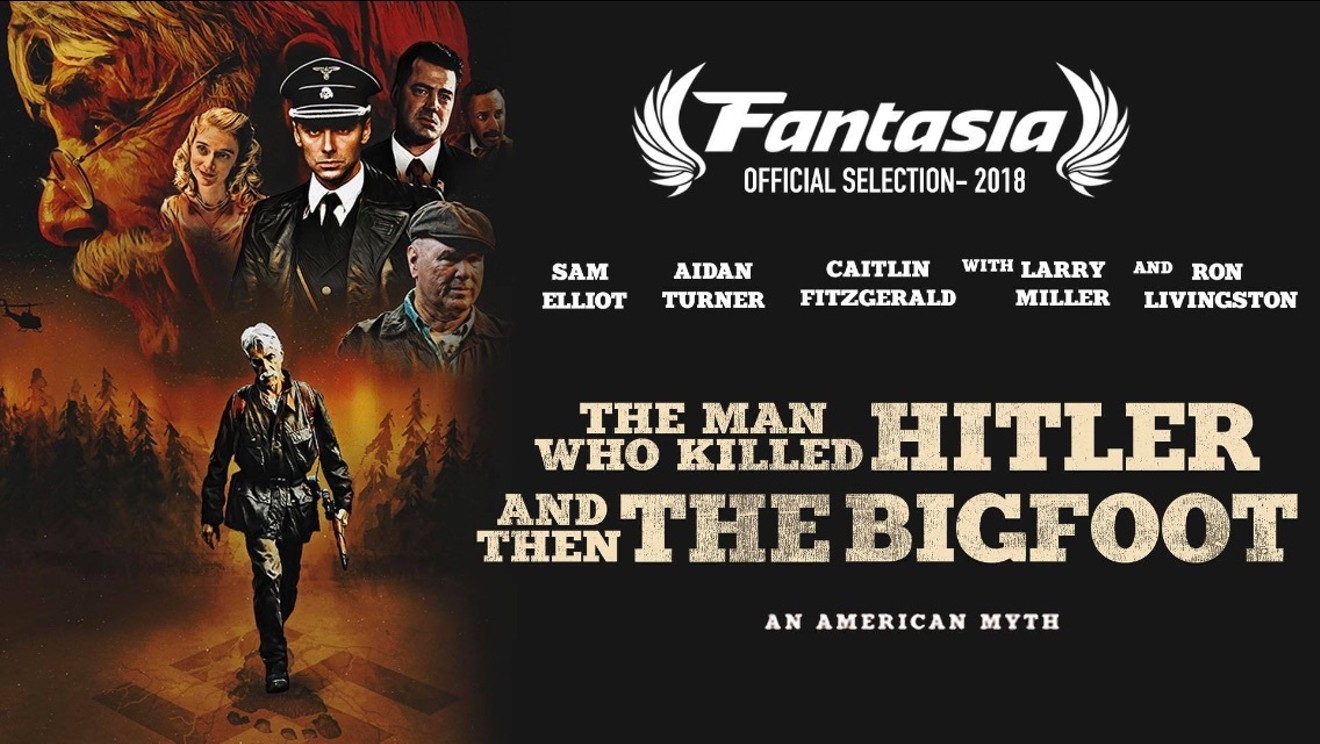 The movie poster can't spell Sam Elliott, but we can. This film is likely to anger both Bigfoot and Hitler enthusiasts. RLJE Films
Title: The Man Who Killed Hitler and Then The Bigfoot


Brief Plot Synopsis: Have you read the title?

Rating Using Random Objects Relevant To The Film: 3 Proudfoots Proudfeet out of 5

Better Tagline: "Now that's how you mess with Sasquatch."

Not So Brief Plot Synopsis: Some 50 years after pulling off the greatest (and unknown) assassination mission of all time, Calvin Barr (Sam Elliott) is approached again to deal with a very different threat.


"Critical" Analysis: When you first heard there was an upcoming film called The Man Who Killed Hitler and Then The Bigfoot, certain assumptions may have followed. Maybe you thought there'd be a B-movie vibe to go along with the B-movie title, perhaps featuring a lead character who made a career out of killing high-profile targets, a la the Smoking Man from The X-Files.

That assumption might even hold for the movie's first few minutes. It opens with Barr drinking whiskey while "Lonely is the Night" by Billy Squier blares from a jukebox. To a certain subset of movie fans, specifically those with fond memories of Sam Elliott and 80s movies (or Sam Elliott *in* 80s movies), we may refer to what writer/director Robert D. Krzykowski is doing as "setting expectations."

What you get instead is something much more thoughtful and deliberate: a meditation on what it means to grow old, alone and in anonymity, after the very definition of peaking early (no, "killing Hitler" is not a euphemism). TMWKHATTB isn't a bad movie in itself, often feeling like a truncated version of a much larger story, and it delivers pretty much exactly what the title promises. And that's kind of the problem.

The Calvin Barr we meet is an old man who putters around with his dog in an empty house, takes his daily pills, and stops by the same bar every night. An early scene in which he dispatches three would-be muggers demonstrates he's still a force to be reckoned with. Along the way, we see flashbacks to a younger Barr (played by Aidan Turner, AKA the "hot dwarf" in the Hobbit movies), sneaking into Germany with the help of a superstitious Russian partisan who informs Barr his mission will succeed, but he will be cursed.

This curse perhaps explains Barr's unsuccessful attempts to win the heart of the fair Maxine (Caitlin FitzGerald), who's out of the picture by the time he returns from the war. It could also be the reason we learn nothing about the post-Hitler, pre-Bigfoot years of Barr's life, only seeing him in and around WWII and as an older man (an indeterminate period, but judging by the older cars, lack of cell phones, and Billy Squier songs, lets say early-mid 80s). Everything in between is a mystery.

You get the sense Krzykowski is using this and Barr's existential malaise to convey the futility of his supposedly heroic endeavors. A character comments to Barr at one point that, "Some old ones just hang around." He's talking about dollar bills not destroyed by the U.S. Treasury, but it's an obvious reference to Barr himself, who later laments that both the Germans and Americans covered up Hitler's death, allowing the Holocaust to continue unabated.

Elliott gives another powerful performance (though another Oscar nom seems unlikely), Turner is solid, and Larry Miller is uncharacteristically understated as Barr's younger brother. Alex Vendler's cinematography gives the "Canadian" wilderness a sinister cast, and the ending where Barr squares off against The Bigfoot* abruptly reminds us of the film's horrific potential, and either undercuts the theme of the preceding 80 minutes, or is simply a device for Barr to finally experience contentment.

If The Man Who Killed Hitler and Then The Bigfoot had any other title, Krzykowski likely wouldn't get near as much shit as he's surely going to. But if audiences can get past their initial disappointment that the movie isn't all Hitler and Bigfoot murder, they may be able to enjoy his movie on its own terms.

* Like "The Batman," apparently.
KEEP THE HOUSTON PRESS FREE... Since we started the Houston Press, it has been defined as the free, independent voice of Houston, and we'd like to keep it that way. With local media under siege, it's more important than ever for us to rally support behind funding our local journalism. You can help by participating in our "I Support" program, allowing us to keep offering readers access to our incisive coverage of local news, food and culture with no paywalls.
Make a one-time donation today for as little as $1.