Venezuelan violinist Eddy Marcano will join Apollo Chamber Players during Music of Exile. Photo by Annerys Carvajal
Optimism is high regarding a return to something that might resemble our pre-pandemic normal, so feel free to celebrate with a tentative high five – it is National High Five Day, after all – or by checking out one of this week’s live, in-person events. This is still mostly a list of the best virtual bets, but as the city continues to baby step closer to more safe, in-person art experiences we’re all for it too.

Apollo Chamber Players will close their digital season on Thursday, April 15, at 7:30 p.m. with Music of Exile, a virtual concert featuring new commissions from Syrian-American composer Malek Jandali and Israel-born composer Gilad Cohen, and a world premiere from Rice faculty composer Richard Lavenda. The performance, presented in partnership with Holocaust Museum Houston and Rice University’s Jewish Studies program and Bonuik Institute for Religious Tolerance, also marks Apollo’s return to in-person activities since the beginning of the pandemic. Though limited in-person tickets are available, you can view the show online, free of charge, here or here.

The contemporary plays continue at the Alley Theatre, and on Friday, April 16, they will present a reading of Old Black & White Hollywood by ShaWanna Renee Rivon. The full-length play, directed by Tiffany Nichole Greene, tells the story of a Black comedienne paired up with a washed up radio star for a TV show in 1954. Though they’re a hit, issues start to bubble up, one of which arises when both women get offered the same role in a movie. The play will be available through May 16, and on Tuesday, April 20, at 7 p.m. you can also join the Alley on Zoom for a live viewing party and chat, moderated by the Alley’s Director of New Work Liz Frankel, with Rivon and Greene. Like the play, it’s free but you have to register in advance.


The Museum of Fine Arts, Houston will present Norway’s Oscar submission, Hope, about a woman who receives a cancer diagnosis at Christmas, as part of their April Virtual Cinema schedule beginning Friday, April 16. Though ultimately it didn’t get the nomination, director Maria Sødahl grounds the film “in a reality that transcends the kind of easy heart-tugs one might expect, especially given that it all takes place during the holidays.” The film, which Variety declared deserved “all the attention it’s gotten at festivals and award ceremonies” since its 2019 premiere, was inspired by Sødahl’s own experience with cancer. You can rent the film here for $12.

Houston Contemporary Dance Company takes to Discovery Green on Friday, April 16, and Saturday, April 17, at 8 p.m. to offer outdoor, safe, and socially distanced evenings of dance during Parallel Play. The program will include a new work by Artistic Director Marlana Doyle and a world premiere from Keerati Jinakunwiphat set to music played live by KINETIC Ensemble. Choreographers Kelsey Walsh and Donald Shorter will also premiere new pieces alongside works from the company’s repertoire, and clinical psychologist Dr. Rachel Tova Winer will be on hand to offer thoughts on facing adversity. Get your dance-starved friends together and go in on a 10-by-6 pod, which can comfortably sit two to eight people, for $100 here (for Friday) or here (for Saturday). 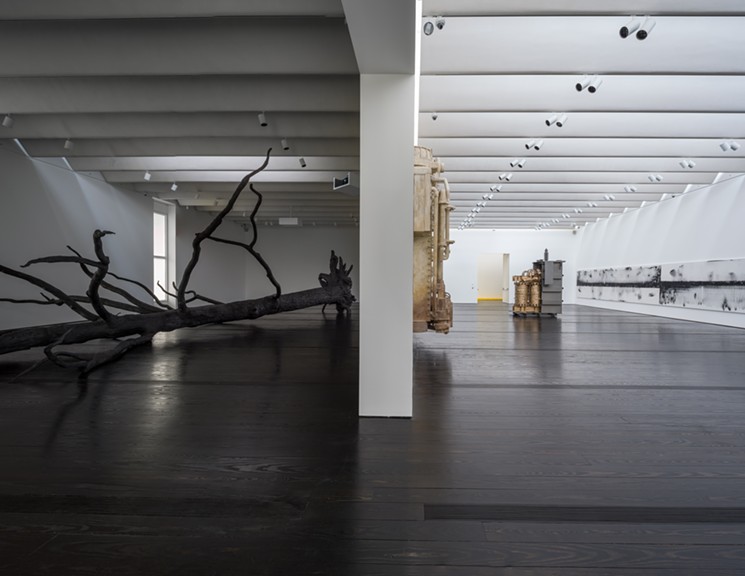 Installation view of "Allora & Calzadilla: Specters of Noon."
Photo by Fredrik Nilsen
On Saturday, April 17, from 4 to 9 p.m. you can join An Evening of Specters of Noon at The Menil Collection, a celebration of the seven sculptural works by artists Jennifer Allora and Guillermo Calzadilla currently on display through June 20. The evening will begin with an outdoor concert, presented by the Menil and Da Camera, featuring Will Cruz and Quattro. From 6 to 7 p.m. you can join a book launch for the exhibition catalogue, after which you can claim a spot on the main building lawn for an outdoor screening (courtesy of Aurora Picture Show) of films by the duo – introduced by Allora – at 8 p.m. All activities are free and you must abide by the museum’s COVID-19 safety protocols.

Carmen Herrera. Angulo Blanco, 2017. Acrylic and aluminum, 84 x 120 7/8 x 19 in. © Carmen Herrera; Courtesy Lisson Gallery. On view as part of "Carmen Herrera: Estructuras Monumentales," presented in collaboration with Buffalo Bayou Partnership and Public Art Fund at Buffalo Bayou Park, Houston, October 22, 2020 to April 23, 2021.
Photo by Paul Hester, courtesy Buffalo Bayou Partnership
Back in October, the sculptures of Carmen Herrera’s “Estructuras Monumentales” found a temporary home in the Fondren Foundation Meadow of Buffalo Bayou Park. It was the Houston debut of the 105-year-old, Cuban-American artist’s first major exhibition of outdoor sculptures. Sadly, this residency will come to a close on April 25, but not before you can enjoy a virtual dance tribute performed in commemoration of the exhibition. Choreographed by Laura Gutierrez, “Line x Light x Color” is a 30-minute, site-specific piece, created in response to the “really singular,” “confident” voice found in the large “rectangular shapes” of Herrera’s work. The piece will be performed twice, and you can view the Saturday, April 17, performance via livestream at 5:30 p.m. Register here to watch the free performance through Zoom.

Pre-pandemic, you could catch violinist Caroline Campbell performing at festivals around the world, regularly touring with Chris Botti, and playing alongside famous artists ranging from Barbra Streisand to Beyoncé. COVID forced a bit of a break, one that Campbell will end this weekend when she returns to the stage right here in the Bayou City for Hollywood Serenade: The Artistry of Caroline Campbell with the Houston Symphony. Principal POPS Conductor Steven Reineke will lead Campbell and the orchestra through familiar Tinsel town tunes, including music from The Godfather, West Side Story, Pirates of the Caribbean, and more. You can pick up a ticket for $20 to enjoy the livestream, straight from Jones Hall, on Saturday, April 17, at 8 p.m.

Celebrate Earth Day at Discovery Green with a film festival, live mural painting, and more.
Photo by Morris Malakoff
It’s almost Earth Day, y’all. Though the official date is April 22, Green Mountain Energy and Discovery Green will kick off the celebration this Sunday, April 18, at noon with an afternoon of in-person activities – such as live mural painting, an Urban Harvest Farmers, and the Houston Environment Short Film Festival Market – and a panel at 4 p.m. that will be presented both in-person and online. The panel, titled “The Nexus of Energy, Climate, and Equity in Houston,” will cover February’s freeze, the effects of electricity on the environment, and how to protect vulnerable populations. The festivities are free, and you can register here to stream the panel through YouTube.
KEEP THE HOUSTON PRESS FREE... Since we started the Houston Press, it has been defined as the free, independent voice of Houston, and we'd like to keep it that way. With local media under siege, it's more important than ever for us to rally support behind funding our local journalism. You can help by participating in our "I Support" program, allowing us to keep offering readers access to our incisive coverage of local news, food and culture with no paywalls.
Make a one-time donation today for as little as $1.