Putting The L In LGBT: Julie Mabry's Pearl Bar Is A True Gem 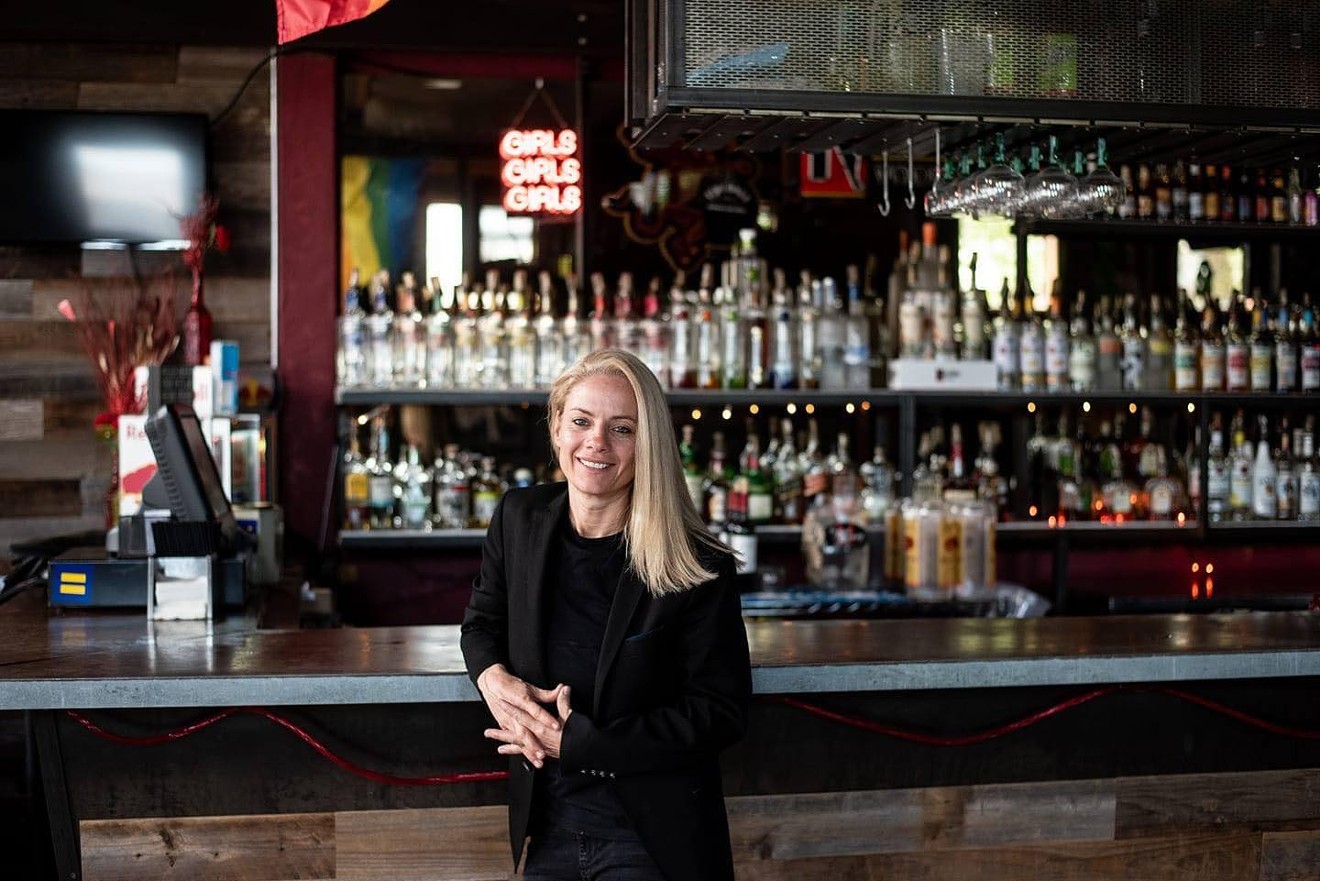 Pearl Bar owner Julie Mabry has worked hard to make her establishment into a home for the LGBTQ community, especially women. Photo by Eden Torres
June is the anniversary of the Stonewall riots, often regarded as the tipping point in the modern gay rights movement and earning its recognition as Pride Month. The Houston Press met with members of the LGBTQ community to learn more about their experiences as being part of this group. These are their stories.

For Julie Mabry, owner of Pearl Bar at 4216 Washington Avenue, the struggle has been real. She and her sibling both came out of the closet in the '80s when homosexuality wasn't very accepted. They both developed addiction habits which wreaked havoc on their lives. And no thanks to the pandemic, Mabry’s bar faced the very real possibility of closing. But if Mabry can forge her way through life as a proud lesbian and become sober for more than eight years, she knew she had it in her to fight and preserve her business. Through hard work, community support, and a bit of luck, Pearl Bar — Houston’s only lesbian bar — has indeed come out on the other side and returned to happier times.

To understand the significance of Pearl Bar, though, one must first know Mabry's own story and how it shapes her view of the bar industry for LGBTQ folk.

"We moved to San Antonio when I was in 7th grade. By that time, I couldn’t really define it, but I was attracted to girls when I was getting into my teenage years," Mabry recalled. "My sister, who is three years older than me, started coming out and hanging around her gay friends when she was about 14 years old. Years later, when I was about 16, I started going to the clubs with her. When we went to the Bonham Exchange in San Antonio, it was the first time I saw my sister come into herself. She was happy. I realized that she was in her element. At the time, I couldn’t explain it, but I could tell she felt safe. She was around her community, and that was her place. From that point, I became observant about the community." That experience planted the seed for Mabry, who started to recognize there was something special — almost sacred — about having safe places like LGBTQ-friendly clubs and bars for likeminded people to gather.

"Even in high school, I became involved with The University of Texas at San Antonio’s LGBT groups just to be involved in the community. I wanted to open a bar since I was 16. The reason is because my sister had struggles in her early life, and a lot of that was her feeling not included or not normal. She was defiant, and people weren’t as understanding about being gay as they are now. My life's goal was to open a lesbian bar because there was never a place for lesbians to go. I love the dynamic of it and the community," she said.

Houston has a plethora of LGBTQ bars, yet they are mostly male-centric. Places specifically geared toward women in the LGBTQ community are a rarity even though they provide a place for women to feel they can be themselves.

"I’ve been to straight bars, and the men hit on you, and that felt uncomfortable. Also, if you felt attraction to someone, that might cause conflict because they might be straight. I became obsessed with having my own lesbian bar, and I studied the bar business my entire life. I worked in the service industry, waited tables and learned customer service. I would go to other lesbian bars and see what guests would drink, what the bars would do to keep women safe, the music, and everything around that. In the late '80s to early 2000s, Houston had two or three lesbian bars. Now, there’s only 21 left in the United States," Mabry said.

Texas boasts only two lesbian bars, with the other one located in Dallas. It isn't hard to imagine the fear that crept in once the pandemic decimated the service industry across the nation, especially for bars as unique as Mabry's.

"When the pandemic first hit, I told the staff we might have to close for a bit. I thought it was going to be three weeks to maybe, worst case, three months. For the first couple of months, it was scary, and I was concerned. But I didn’t realize this would be a year," she said. "We were up for our lease renewal. It got to the point where I thought I would lose Pearl. It’s hard to think about that. I couldn’t get out of bed for a while. I was petrified. I was applying for help, but it was a mess."

Thankfully for Mabry and her bar, help arrived to save her business and the safety it provides to the lesbian community. Mabry started a GoFundMe, which provided a liferaft of more than $40,000 in donations from across the country. She also sold T-shirts and steaks to-go to bridge the funding gaps.

Finally, a big break arrived when Mabry heard about a grant in partnership with the Human Rights Campaign and Showtime.

"When the HRC/Showtime grant came up, I was hopeful. There were so many businesses that were hurting. When I found out about the grant, I was proud and grateful. It was one of the many things that happened that made me get out of bed again. Even when I could open Pearl after the restrictions had lifted, I didn't do it because I thought that was careless. We didn’t open for six months. I felt really proud of my business when HRC came through," Mabry said.

While it was a scary period for Mabry and her loyal base of customers, the bar survived. With restrictions being lifted and vaccinations available, her business has returned to normal.

"We’ve been extremely busy since we’ve opened back up," Mabry added.

Pearl Bar, located at 4216 Washington Avenue, is open Tuesday through Sunday. For more information, visit pearlhouston.com.
KEEP THE HOUSTON PRESS FREE... Since we started the Houston Press, it has been defined as the free, independent voice of Houston, and we'd like to keep it that way. With local media under siege, it's more important than ever for us to rally support behind funding our local journalism. You can help by participating in our "I Support" program, allowing us to keep offering readers access to our incisive coverage of local news, food and culture with no paywalls.
Make a one-time donation today for as little as $1.