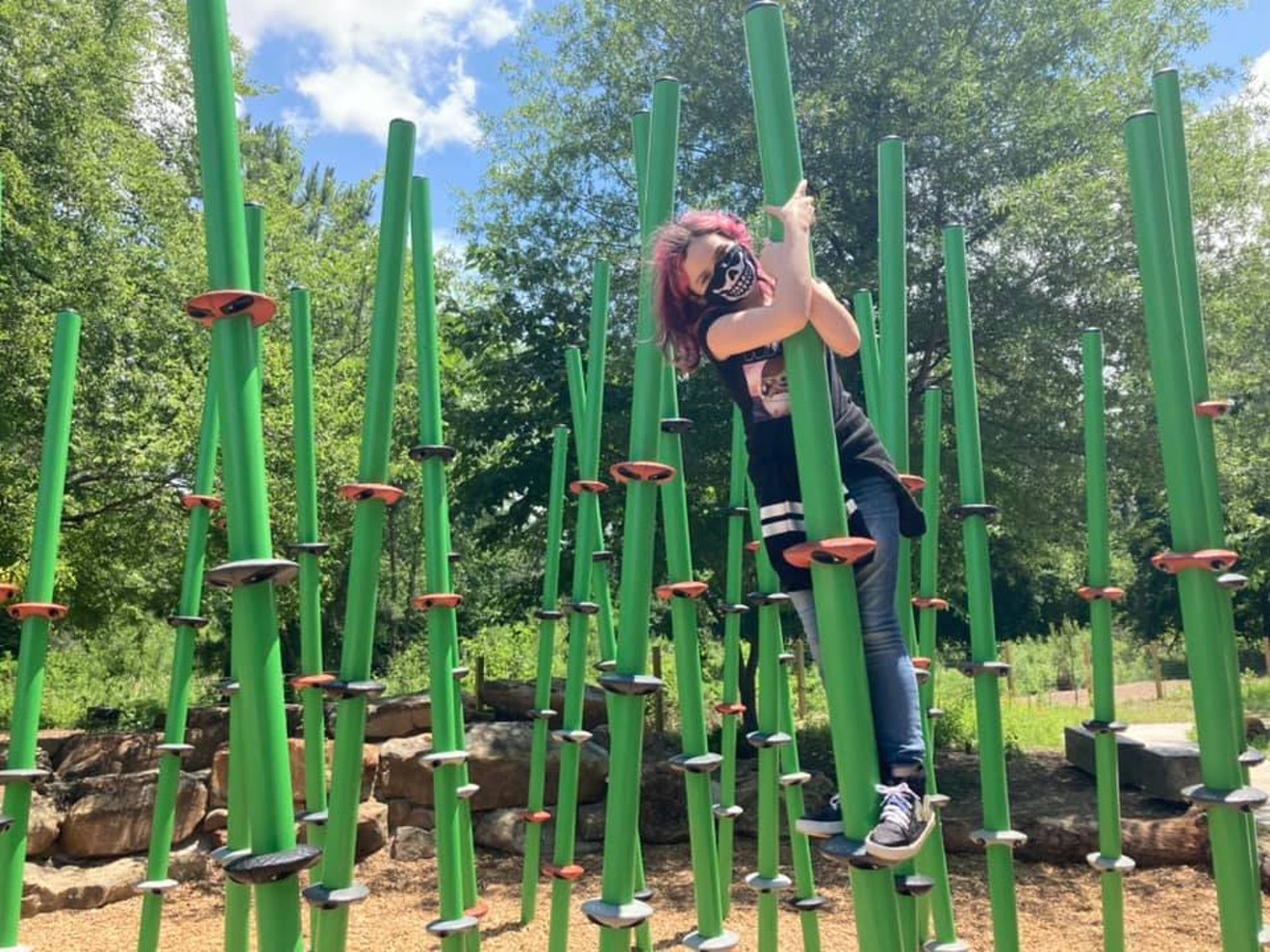 The playscape has some great climbing features. Photo by Jef Rouner
The Houston Arboretum is by far my favorite place in the city since Wilde Collection burned down, so I’ve been watching with eager anticipation as they slowly finished the giant new playscape they have been working on for what seems like forever. It finally went public this week, and it’s kind of adorably wild.

I took along my 11-year-old even though she’s really starting to age out of the playground. She spent the day doing the STAAR Test after a year of remote learning, so I figured running around and climbing through tunnels would be a good way to power cycle her brain despite the 95-degree heat index.

The playscape is well designed and covers a fair amount of area. Each spot has a single large piece of equipment, making it the perfect place for kids to declare territory and run their own manic version of a game of Risk. Building on the previous playscape’s ideals, the equipment incorporates a lot of natural materials, including one area that is just really cool logs.

This means it’s really not the safest place to play, which honestly adds to the charge. This isn’t a soft rubber and foam creation. It’s really just highly organized nature with a little industrial twist to it. There’s a reason that it’s set in the middle of a fake set of woods.

In fact, the official press release mentions that kids and parents should be careful because there’s at least some chance that the local wildlife, including snakes, will be using the equipment themselves. There’s not much chance of that in the current heat, but it’s worth remembering that this is an addition to a near-natural environment.

That philosophy dominates the playscape. We went on a day where a homeschool collective had rented out the space, which occurs regularly so make sure you call ahead and find out if its open to the public. My daughter wasted no time in infiltrating the impromptu girls-versus-boys war that broken out between the Republic of the Tube Cave and the Unites States of Toddler Hill. She negotiated trade of the garden implements that are onsite so that kids can dig in the dirt before promptly betraying both camps to secure her own set for use. It was all very the Little Golden Book version of Lord of the Flies, and I imagine some really important lessons are going to be learned among the playground equipment city states.

Many a sinister grade school coup will be hatched in these tubes.
Photo by Jef Rouner
There are some downsides. As I said, it’s not the safest place although well within what I’d call acceptable. The shade trees for the various benches aren’t really grown yet, leaving only one really comfortable area for parents to congregate in. It’s a downer if you don’t really want to join the cool kids clique that gets their first.

The water pump feature onsite wasn’t working when we visited. There’s also a weird dock that goes nowhere. I suspect it was originally supposed to connect to one of the areas ponds before someone realized that having a body of stagnant water next to children playing was a really good way to have them carried away by mosquitoes.

There's an enormous spider web, but also watch out for actual wildlife.
Photo by Jef Rouner
Overall, it’s a great addition to the ever-evolving Houston Arboretum. It makes for a nice compliment to a family outing under the trees, and further cements the location as one of the cities best free places to kill a few hours. Mind the fauna, teach your child a little diplomacy, and pack some band-aids for maximum enjoyment.

The playscape is open every day from 7 a.m. to dusk at the Houston Arboretum, 4501 Woodway. For more information, visit HoustonArboretum.org or call 713-681-8433. Free, with metered parking.
KEEP THE HOUSTON PRESS FREE... Since we started the Houston Press, it has been defined as the free, independent voice of Houston, and we'd like to keep it that way. With local media under siege, it's more important than ever for us to rally support behind funding our local journalism. You can help by participating in our "I Support" program, allowing us to keep offering readers access to our incisive coverage of local news, food and culture with no paywalls.
Make a one-time donation today for as little as $1.