How Hurricane Harvey Taught the World About Houston

Volunteers at NRG Center Photo by Jack Gorman
As a lifelong Houstonian, I know two things. First, there will be flood. It is the nature of our topography and climatology that downpours will occasionally inundate the city with water. Not like what we witnessed during Hurricane Harvey, obviously, but it happens.

Second, no one really understands Houston. This is not to say we are misunderstood. Places like New York City and Miami, with their complex socio-economic structures and glitzy, made-for-TV images are misunderstood. To be misunderstood, you must first be known and Houston, despite being the fourth largest city in the country (something a lot of people don't know), remains a mystery to most who don't live here.

When I speak to people who have never been to Houston, I hear the assumptions. Most believe us to be a bit like the Old West: dry, sprawling and filled with guns and cattle. Some still think we all own oil wells. We all must wear boots and ten-gallon hats. We drive big trucks and work for oil companies (well, not everything is inaccurate). It paints a picture, not a terribly flattering one, of what Houston is and, more importantly, who Houstonians are.

A volunteer transports donations for Harvey relief at BBVA Compass Stadium.
Photo by Jack Gorman
Despite all the glossy magazine stories and glowing reports on Houston's diversity, thriving culinary scene, world-class art museums and cutting-edge healthcare, no one gets us. We have remained an enigma. Until Harvey.

It took Harvey to help people understand the sheer size of the region.

The constant drumbeat from national reporters early on during the storm had to do with why the city did not order evacuations. Mayor Sylvester Turner and Judge Ed Emmett attempted to patiently explain how dangerous that would have been, but the questions persisted. Of course, they weren't here during the terrible and tragic flight from Hurricane Rita, when 100 people died in the heat on crowded highways.

The same was true on social media, where memes began to spring up to explain the sheer enormity of the region. One explained that evacuating Houston would be like the population of Manhattan vacating an area the size of Maryland. It took days of constant reminders from both officials and average Houstonians that this place is big, like, BIG big. Slowly, it began to dawn on outsiders. "Oh, so, you mean BIG!" You got it.


There we were, Houstonians of every stripe, pulling strangers out of rising flood waters.

It took Harvey to demonstrate the real diversity of Houston.

There have been numerous reports over the past decade citing our area as the most ethnically diverse region in the country. But even those who visited were skeptical. Anthony Bourdain ate barbecue with rappers and dined on Vietnamese crawfish in a suburban backyard for his CNN show, Parts Unknown. He praised the city as a place worthy of our aspirations as Americans. But, it wasn't until boats full of people of every color and socio-economic background were being hauled from flooded homes to safety did the world finally begin to see.

First responders await relief assignments at NRG Center.
Photo by Jack Gorman
There we were, Houstonians of every stripe, pulling strangers out of rising flood waters. The images of people of every color and economic background huddled together on flat-bottomed Jon boats and in the backs of trucks, as depicted on the most recent cover of the New Yorker, were as compelling as they were astonishing, particularly to a country so divided by race in recent months. Despite white nationalists marching through the streets of America, Houstonians stood waist deep in flood water, side by side, no thought of anything but the desire to help. We became the example of how to live together, come hell or high water.

It took Harvey to recognize Houston is in Texas but not necessarily of Texas.

Governor Greg Abbott suggested everyone should evacuate, quite counter to the advice of the Democratic mayor who had opposed him at nearly every turn before this, from sanctuary cities to bathroom bills. Still, the image of a deep red state persisted as outlets from Politico to Charlie Hedbo depicted us as backwards rednecks and Nazis. And let's be clear, those people do exist in Texas as they do in much of the South and across the country. It doesn't help when the governor and his lieutenant push the kinds of legislation that makes us look like bigots and, quite frankly, assholes.

But Houston is a different animal. It isn't a hotbed of racism and intolerance. Our last two mayors have been a black man and a lesbian, and as anyone watching on TV could see, no one was turning a blind eye to the suffering of anyone no matter what they looked like or where they came from. And as the storm raged on, people from across the country began to race to our defense, both in body and in spirit. We could not be boiled down to an overly simplistic stereotype, they would say. And they would be right.

It took Harvey show just how great and resilient Houstonians are.

Those who have long sought to explain their love for this hot, humid, sprawling, mosquito-laden swamp often use the same word: people. It's a hard thing to fully grasp unless you live here. Years ago, a friend who had moved here from New Jersey was recounting the story of her first foray into a Houston mall. When she bought a few items at one of the shops, the cashier smiled and said, "Have a nice day." Her first thought was, "Is this girl f***ing with me?" Throughout Harvey, there was an undercurrent of suspicion about Houstonians — "They couldn't be THIS nice, could they?" Watching reports from the national media, there was a disbelief that people weren't suffering. There didn't seem to be enough misery for them. 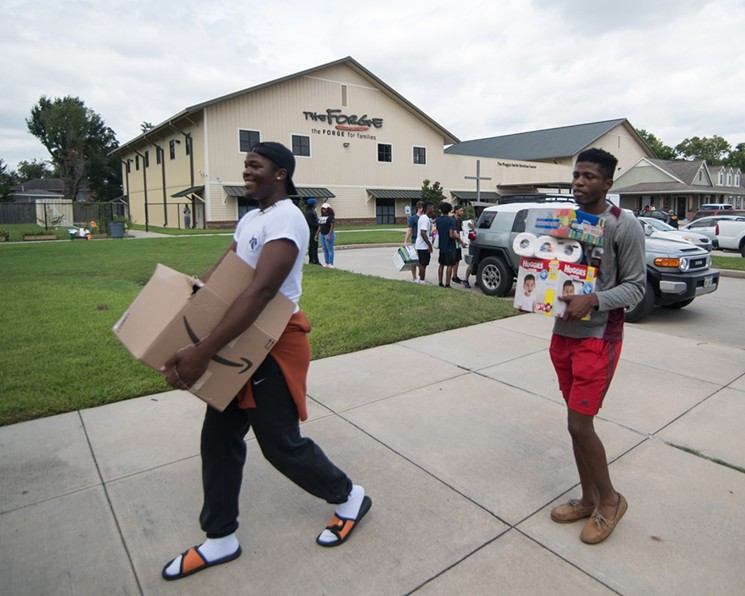 Volunteers loading relief supplies at Forge For Families.
Photo by Jack Gorman
As I have been fond of telling confused people in this regard, "It's not that we are happy. We just aren't miserable." This is the default position for most of us here. Friendliness is perhaps our greatest virtue (though stuck in rush-hour traffic, it might not always be apparent), followed closely by a sturdy work ethic. We get things done and we try to be polite while doing it. And in the most important moments, the times when it matters, like hurricanes, we work harder and we smile more. Within days of the storm, a recurring theme began to emerge from people outside our region: Hey, these Houston folks are pretty decent. One Kentucky man here with a boat to help rescue people said, "I've never seen so much love in one place." Welcome to Houston, my friend.

If there was one takeaway I would want people to have from all this devastation, all this tragedy, it would be that we are good people, decent people, the kind of people you want as neighbors, not just because they are quiet and take care of their lawns, but because when you need them, they will be there for you in ways you may never have imagined. When the waters rise, we have a boat. When the floods recede, we've got a hot meal and a safe place to stay. When it's time to rebuild, we'll bring the hammer and the nails. We don't need to know your name or where you come from. You're in Houston now. That's all that matters.

For those who were skeptical, it feels as though minds have begun to change. People are beginning to recognize just how incredible this hot, humid, sprawling swamp can be. Finally, the world is seeing what we all knew about Houston, the city we love.

And it only took 51 inches of rain to do it.