Paul Scheer Treats Watching Bad Movies Like “Group Therapy” in How Did This Get Made? Live 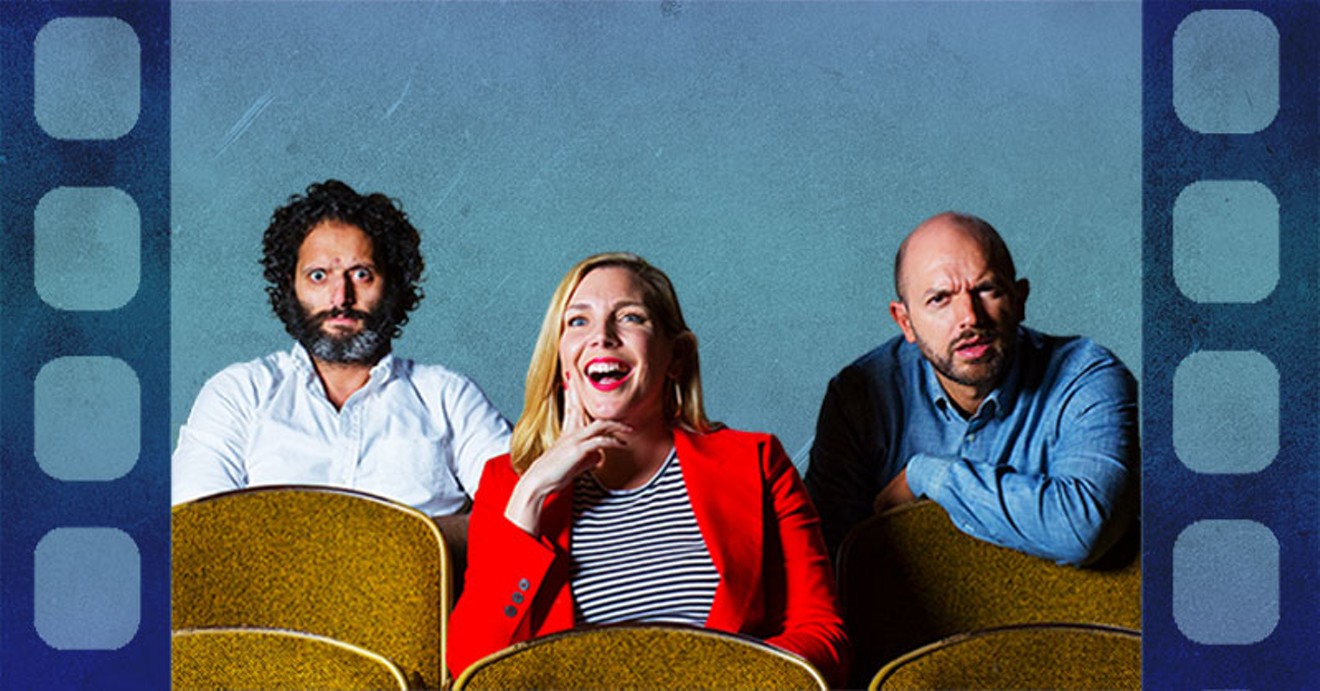 Scheer, with fellow improv mainstays Raphael and Mantzoukas, are reveling in everything rotten Photo by Earwolf

Paul Scheer has been obsessed with film his entire life.

The comic-actor, known for roles in sitcoms including The League, Veep and The Good Place, has watched every film on the American Film Institute’s Top 100 films on his podcast Unspooled with film critic Amy Nicholson, and has even appeared in a few certified fresh flicks himself including Hollywood satire The Disaster Artist and the Seth Rogen rom-com Long Shot.

But it was the bad movies that really got Scheer talking. Starting on the stage before moving to the realm of podcasting in 2010, How Did This Get Made? has become a must listen for dissecting the worst and weirdest Hollywood has to offer. The on-stage, live version is coming to 713 Music Hall this Sunday.

“It’s always a good time for bad movies!” Scheer says. “The one thing that never changes culturally is there are always bad movies being made. And maybe in the world of streaming right now, there are even more opportunities for them to be made. For us, we cull films from all over the place. Not just movies that came out in theaters and they’re from all different years; we don’t just do 2022.”

Co-hosted by Scheer, and his wife June Diane Raphael (Netflix’s Big Mouth, Grace and Frankie) and friend Jason Mantzoukas (Tommy Lee’s Penis in Pam and Tommy on Hulu, Parks and Recreation), the Earwolf- produced podcast has cranked out nearly 300 episodes covering a breadth of schlocky entertainment ranging from unfunny comedies (The Love Guru, Stop or My Mom Will Shoot!) nonsensical dramas (Battlefield Earth, Jupiter Ascending), grating musicals (From Justin to Kelly, Grease 2) and however many Sharknados they make.

“For us, we were doing this before there were podcasts” says Scheer, who explains his two anniversaries with Raphael – 12 years for the podcast, 15 years a couple. “Explaining a podcast at the time was like, ‘it’s radio, but you can listen to it on your iPhone!’ So it wasn’t like the thing now where everyone has a podcast. So June and I love going to see movies, and so does Jason, and we found ourselves in the middle of a conversation after we had just seen a bad movie, which was Wall Street 2: Money Never Sleeps. And June was chiming in and we were having this conversation, and Jason was like: ‘This is a podcast, this should be a podcast.’”

While comics have been mocking bad movies since the days of Mystery Science Theatre 3000, the medium of podcasting seemed uniquely suited to this type of reference heavy chat fest. “This felt like whoa, that would be a great idea,” Scheer says. “You know, and this wasn’t even conscious, but I think it just triggered in me was everyone has done this, sat around in a like a diner, or a living room and said you have to rewind to this and – it was just this universal sense of we can all enjoy a bad movie. No matter where you are from, it’s not too inside comedy, that just seemed so perfect.”

As the idea grew from the stage to the screen, Scheer admits to never expecting it pick up the life it has over the decade plus their trio has been dropping episodes with occasional guests (“Weird Al” Yankovic, Adam Scott and Conan O’Brien have all made memorable appearances over the years). “We never thought it would go on this long. We never thought it would be anything more. We just kind of decided to do the show and we found out that people were actually listening to it.

"And then we did a live show at Bumbershoot in Seattle. Hundreds of people came out, and we just kept on growing it. I think one of the things that we love about it is it gives us a chance to check in with each other — it gives us a chance to sort of talk about nothing. Especially during the pandemic, one of the best parts of it was getting on the phone Jason and June and just sharing whatever experience we had with this bad movie.”

Despite its roots on the stage, retrofitting the podcast formula to work as a touring act has been Scheer’s newest challenge and a source of great satisfaction. “What I really was focused on was for theaters was: how do we take what we do on the podcast and bring it to a live theater? Jason, June and I are all live performers. I think I get a little bit anxious when I see people doing live podcast performances because it is just people sitting on stage not really doing anything. We’re tried to make our live shows really special... like, we don’t make a tour shirt – the audience helps make the shirt for their show. They vote on it live in the crowd, and so the shirts are so of the moment – not to the movie, but to the show. We want people to have this fresh one of a kind experience.

“The other thing that’s fun about the show is it is very visual, we do all kinds of fun games with the audience, the audience gets to come up and sing songs an ask questions. They become part of the show. Because of that, the show goes long and we actually for most of the shows we do a large chunk of it is never released. It’s for the people in the room. We like the idea that the shows can work on two levels. It's still gonna be the podcast you know and love – but it’s also going to be an experience that we hope is one of a kind.”

But for those who pre-game the Elijah Wood led thriller, they’ll be in for an extra treat come showtime. “I’d say 60 percent of the people who listen to the podcast watch the movie, and the rest don’t. You can always listen to the podcast without seeing the movie, but it adds to it if you know what the movie is and everyone has had this experience. Whether it is a terrible movie or a great movie, well they’re all terrible movies... but it’s like we’re in a group therapy session almost.”

For those interested, Scheer describes the selection of Open Windows as specifically dear to his heart as it is a semi-sequel to one of his favorite recordings from earlier this year, Grand Piano. “If you’re a fan of the podcast we did this movie which was basically Speed in a concert hall,” the comic teases. “Elijah Wood played a concert pianist where if he stopped playing fast, he would be shot. That was it. This was so crazy, and someone pointed out – you know, the same star Elijah Wood and the same writer did another movie? It was called Open Windows and it’s with Elijah Wood and Sasha Grey. It’s like Rear Window but all through the computer. I’m so looking forward to because it was a fan favorite episode, and we’re kind of getting a chance to go back and revisit it.”

So now with the podcast comfortably ensconced in the dynasty of the great comedy podcasts of the era, and a stage tour successfully mounted – what could be next for the podcast’s evolution? A basic cable adaption? A film about the making of the podcast itself?

Scheer seems happy to dispel those ruminations. “I hope that never happens,” he says instantly. “We’ve hesitated into turning How Did This Get Made? into anything but a podcast. It’s something I feel really strongly about... the fun of it IS the medium. We are doing a podcast. And when we are doing a live show, we are still doing our show. I feel like people are often so excited to take something that works in one medium and turn it into another medium. I’m just like: ‘Why? Why do we need to do that?’ I just heard the first season of Serial about Adnan, and what a great documentary that was. Why do we need to now make that visual? We’ve already experienced that.”