Sandman: The Problem With Despair 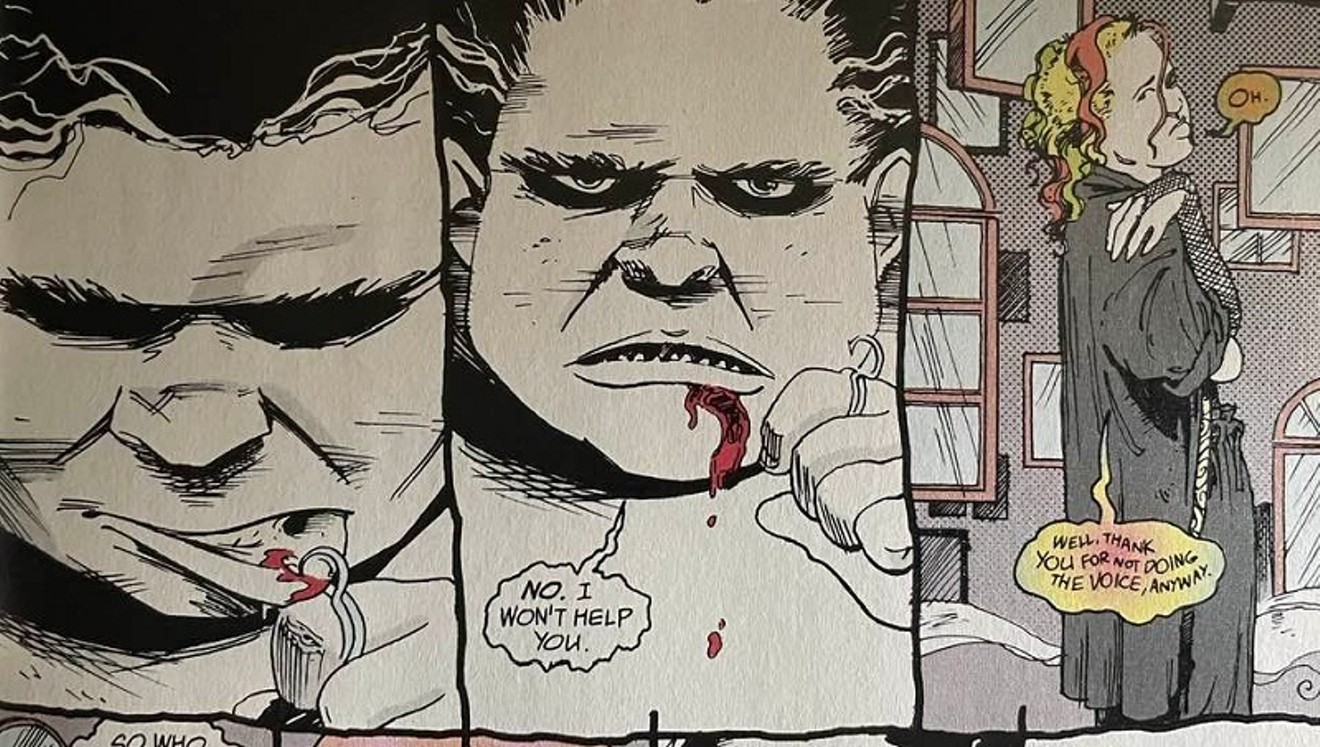 Despair deserves better than she got in Sandman. Screenshot from Sandman: Brief Lives
Mild Spoilers Follow.

Netflix’s adaption of Neil Gaiman’s comic The Sandman is stunning, incredible, and so many other glowing adjectives. That such a strange comic could finally be realized into a television show that does it justice is nothing short of a miracle. The tale of Morpheus, The King of Dreams, as he escapes captivity from a human magician and tries to rebuild his kingdom, is executed almost without flaw.

If there is one aspect of the show I have beef with, it’s the short appearance of Morpheus’ younger sister, Despair. Like her brother, she is an anthropomorphic personification of a concept. She plays only a minor role in the story as a confidant of her twin sibling Desire, who is trying to destroy Morpheus.

Donna Preston portrays Despair in her one scene halfway through the show, and it’s a mess. I doubt the fault lies with Preston, who does seem to be putting her heart into her brief appearance as she schemes with Desire and self harms with her trademark fishhook ring. It’s the presentation that is off.

In the comics, Despair is one of the most terrifying figures in a book full of nightmares, even if she is rarely outright malevolent. According to The Sandman Companion by Hy Bender, Gaiman was inspired by a 1980s book of photography called Modern Primitive. During an interview, Gaiman said:

“The book…had a photograph in the back titled something like ‘Mandy from Mars.’ It Showed a strange, fat, snaggletoothed naked woman staring forward. I took one look and said,’That’s Despair.’”


Bender then talks about interviewing artist Jill Thompson, who worked on Sandman. She loved drawing Despair because her short, rotund body was a welcome change from the typical idealized forms of superheroes.

Despair is almost always portrayed as nude, her pale skin gleaming off the page. She is fully comfortable with herself, only ever shrinking or retreating when the subject of their missing brother Destruction, who she had a close relationship with, is brought up. There is nothing weak or timid about her.

It’s worth quoting Despair’s brief biography given in Season of Mists to fully understand how this primal force chooses to take form.

“Despair, Desire's sister and twin, is queen of her own bleak bourne. It is said that scattered through Despair's domain are a multitude of tiny windows, hanging in the void. Each window looks out onto a different scene, being, in our world, a mirror. Sometimes you will look into a mirror and see the eyes of Despair upon you, feel her hook catch and snag on your heart.

Her skin is cold, and clammy; her eyes are the colour of sky, on the grey, wet days that leach the world of colour and meaning; her voice is little more than a whisper, and while she has no odour, her shadow smells musky, and pungent, like the skin of a snake.

Many years gone, a sect in what is not Afghanistan declared her a goddess, and proclaimed all empty rooms her sacred places. The sect, whose members called themselves the Unforgiven, persisted for two years, until its last adherent finally killed himself, having survived the other members by almost seven months.

Despair says little, and is patient.”


Despair is first and foremost, a regent, one of the most powerful beings in a universe that has both Lucifer and Superman. Within her scope of power, she is an absolute master.

And in the Netflix series, she’s a sad, fat girl who seems to get mildly bullied by Desire.

The first thing I noticed was her clothing. Not only is Despair dressed, but it’s in a dour, plain outfit that almost disappears into the chair she is sitting in. At first, I thought maybe Netflix was just worried about having a constantly nude character and what that might do for the potential audience. However, Tom Sturridge spends most of the first episode naked while Morpheus is trapped, and the new character Gault (played by Ann Ogbomo), is mostly nude with swirling mists and nebulas covering her in long shots.

Of course, Sturridge and Ogbomo are traditionally attractive (read: thin) people. Preston is a woman of size. The fact that the show created an entirely new character and chose to do what they should have done with Preston to someone like Ogbomo is very telling.

Even aside from the nudity is just the overall package. Despair looks like she is cosplaying Sadness from Inside-Out, and in doing so has lost all her majesty. Rather than a top knot that leaves Despair's face free to be seen, Preston’s Despair is almost hidden behind her straight hair. She looks depressed, not the personification of ultimate depression. Her voice is almost there, but the timidity is unmistakable. This Despair is master of nothing.

I can certainly understand why the television version would shy away from Despair’s constant use of her hook on her own flesh. Netflix famously got a lot of backlash over 13 Reasons Why, and it’s not unreasonable to assume they’d be cagey about possibly promoting self-harm. That said, they went with a mediocre middle ground.

Preston’s Despair uses it only once, barely drawing blood, and the expression on her face is a kind of sick joy. It’s a pretty tame scene in a show where a character rips their own face off during a drag number.

There’s none of the strength that the comic Despair has. She hooks her skin (and in one case, her eyeball) because that’s what she is. Her scarification isn’t a vice or a cry for help. It’s simply an affectation by a being humans can barely understand. She will literally do it while having an otherwise normal conversation, unembarrassed and completely uninterested in how uncomfortable it makes others.

That Sandman is so perfect makes this one misstep seems glaring. We’ve met four of the Endless so far in the show, and only one of them has seemed weak. There’s not even a cursory glimpse of Despair’s mirror realm, denying her even the hint of queendom. It’s a sad way to show off one of the most compelling characters Gaiman has ever created, and hopefully it can be fixed before Season 2. Preston has the chops to make Despair appropriately intimidating.
KEEP THE HOUSTON PRESS FREE... Since we started the Houston Press, it has been defined as the free, independent voice of Houston, and we'd like to keep it that way. With local media under siege, it's more important than ever for us to rally support behind funding our local journalism. You can help by participating in our "I Support" program, allowing us to keep offering readers access to our incisive coverage of local news, food and culture with no paywalls.
Make a one-time donation today for as little as $1.