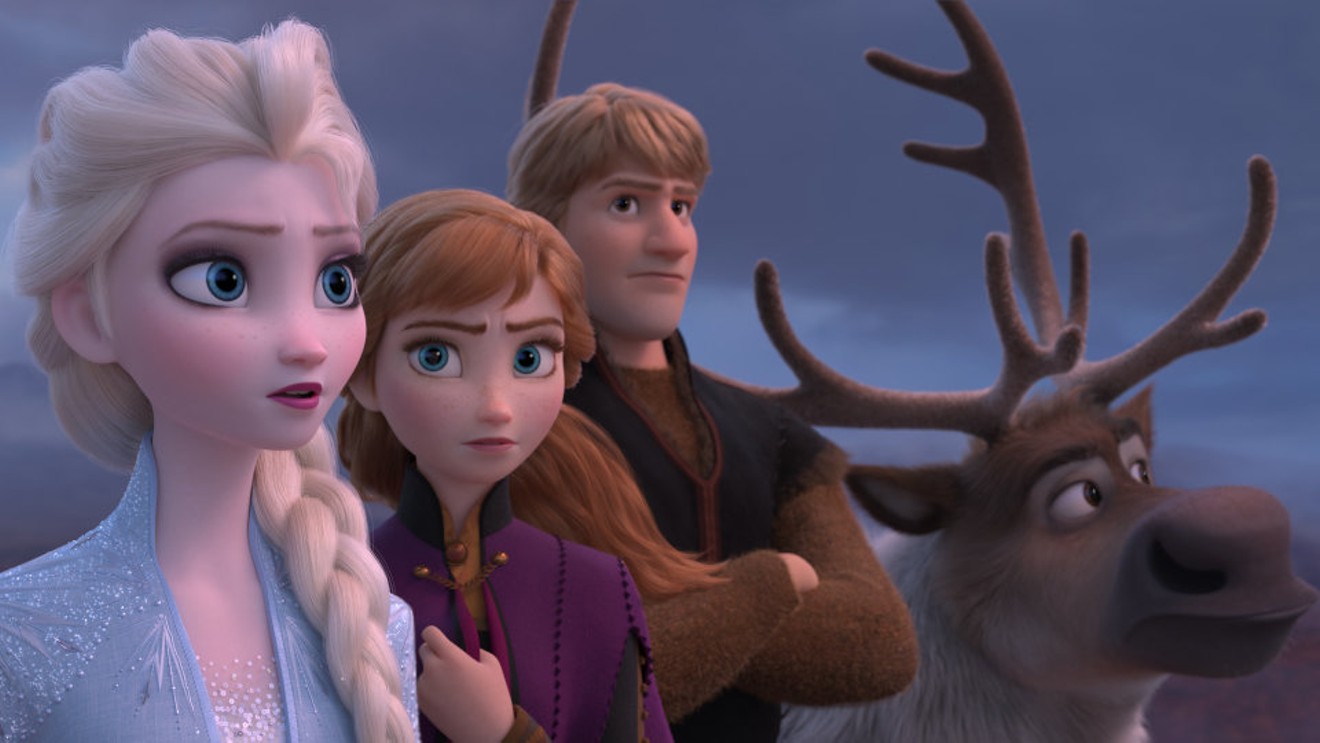 Weeeeeeee, adventure! Screengrab from Frozen 2
Frozen 2 is easily the most-anticipated animated Disney sequel ever, and it does not disappoint. The story follows Queen Elsa as she longs to be free of the constraints of her office and follows a mysterious voice into an enchanted wood. Along the way, she and her merry band lift a curse, commune with pagan spirits, and right a terrible wrong Elsa and Princess Anna’s family did to the native people of their land. Oh, and Kristoff gets the best animated rock power ballad ever recorded. My only complaint is that it needed to be roughly 42 percent gayer and it’s yet another example of Disney villains going extinct.

I also loved it because it kills the unified Disney princess fan theory.

If you haven’t heard, it goes like this. Princess Rapunzel and Eugene appear in Frozen as a brief cameo, indicating that they exist in the same universe as Elsa and Anna. It also implies that the two royal families might be close, as Rapunzel is likely being sent to Elsa’s coronation as a representative of the Kingdom of Corona. If everything stopped there, it would be fine.

The internet hates letting things lie, though, so the theory expanded into two major inclusions. The first is that the ship which Elsa and Anna’s parents died on is the same one that Ariel frequents in The Little Mermaid. The other is that the shipwreck is the same one that left Tarzan’s parents stranded. I’ve always found the expanded version of this theory ridiculous, and Frozen 2 kills it dead if you pay close attention.

Near the end of the movie, Elsa begins traveling back through memories trapped in water (the film’s weird pro-homeopathy message is a discussion for another time). Among those memories we see her father reading a book as a young man and her mother inquiring about it. The cover has a mermaid on it that resembles Ariel and he replies it’s a book by “a new Danish author.” The implication is clear that he is reading Hans Christian Anderson’s story “The Little Mermaid.” Ergo, Ariel exists in Elsa and Rapunzel’s world as a fictional character, not a real person.

And no, it isn’t possible that the story was based on an in-universe real person. After all, it would be impossible for Elsa’s parents to be reading a book that spends a lot of time in a shipwreck they won’t have for many years.

Unfortunately, this inclusion does make the timeline very odd. A map in Frozen Fever has Roman numerals indicating that film takes place in 1840 when Anna is 19 years old. That is contradicted by her father reading a story before she was born that wasn’t published until 1837. Realistically, Frozen 2 should be set sometimes between 1860-70 if we go by the book.

The good news is that whichever year is the correct one, both eliminate the Tarzan portion of the theory. There’s a year controversy there too. The 1999 film is set in 1882, while the later television series is set around 1912 (the original setting of the novel). Regardless of whether Tarzan was born in 1864 or 1894, both would be far later than the shipwreck of Elsa and Anna’s parent’s death. To say nothing of the fact that Frozen 2 also establishes that the royal couple of Arendelle actually sailed north from the country (presumed to be in Scandinavia), not south. It’s virtually impossible for Tarzan’s parents to have washed up in West Africa.

So, Ariel is a fictional character and Tarzan, if he does inhabit the same universe, does not come from the same shipwreck. Look on the bright side, though. There’s still plenty of space for a Frozen/Tangled crossover.
KEEP THE HOUSTON PRESS FREE... Since we started the Houston Press, it has been defined as the free, independent voice of Houston, and we'd like to keep it that way. With local media under siege, it's more important than ever for us to rally support behind funding our local journalism. You can help by participating in our "I Support" program, allowing us to keep offering readers access to our incisive coverage of local news, food and culture with no paywalls.
Make a one-time donation today for as little as $1.