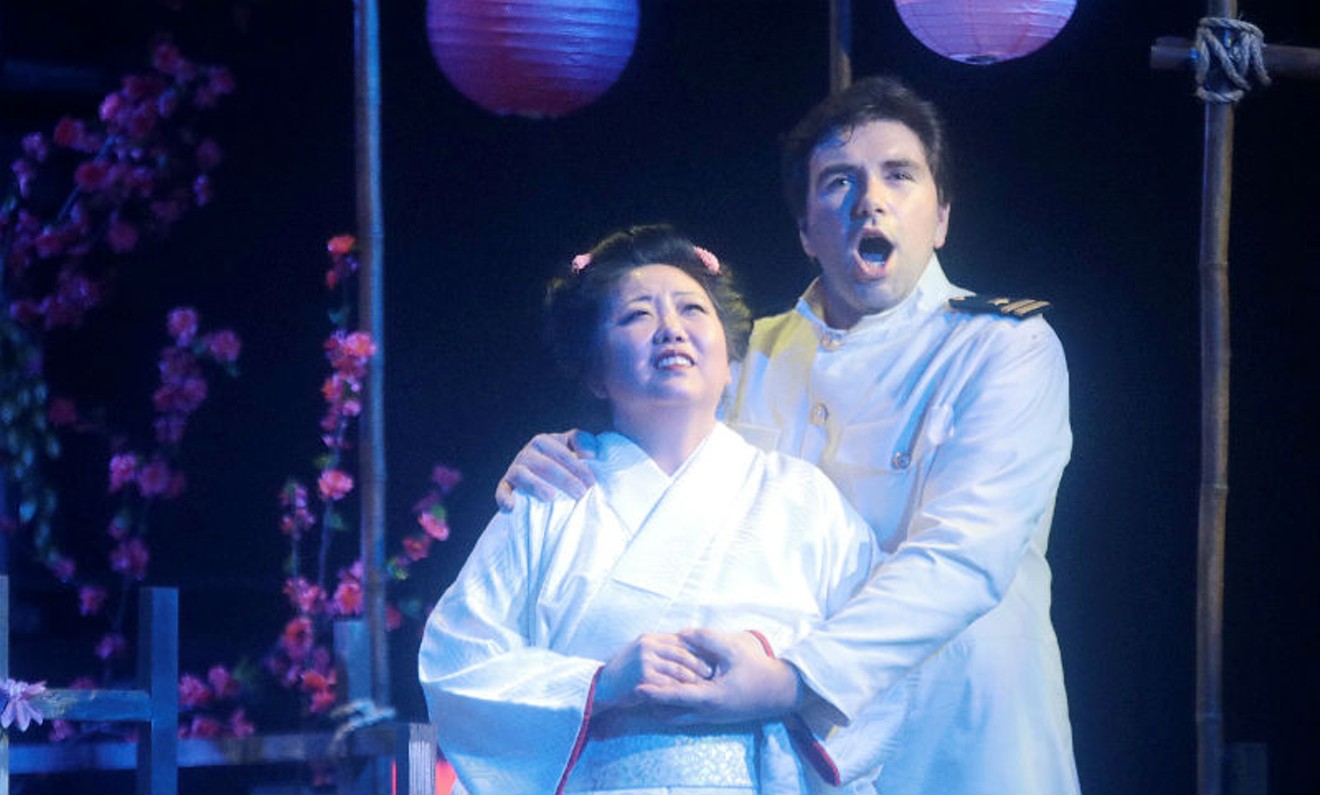 Madama Butterfly sung in Japanese and English for the first time. Photo by Pin Lim
Is there any opera in the rep sadder than Giacomo Puccini's achingly radiant Madama Butterfly (1904)? You could opt for his Boheme, perhaps, with its poor Parisians scrambling for rent and love, succumbing to consumption and despair. Verdi's Otello is tragic, for sure, but not ultimately sad so much as preordained. Heggie's Dead Man Walking's anti-hero is set for execution, which is a pretty sad state, but he deserves his fate. Leoncavallo’s backstage one-act Pagliacci comes close, but it's too brief for us to get thoroughly involved with the bumbling clowns and adulterous show people. No, it's Butterfly that elicits our tears. We gratefully shed them.

Innocent young geisha Cho-Cho-San is sold into marriage to randy American naval officer Benjamin Franklin Pinkerton, who has fallen for her porcelain beauty and delicate grace. Marriage is the only way to get her into bed. We know from the beginning that he's a cad and will abandon her when he leaves on assignment, but he rents a house on a hill overlooking Nagasaki harbor and doesn't raise an eyebrow at her renouncing her faith, her traditions, her family to set up house with him. He may, in fact, love her a little, but, ultimately, he wants an American wife. She'll forget him when he's gone. American consul Sharpless warns Pinkerton that Butterfly is too innocent, too trusting, to be a trifle, but Pinkerton's in lust. “A girl in every port,” he brags to Sharpless's useless protests.

Things don't go well. Pinkerton has been gone three years. There is a child now. Money has run out. Cursed by family and friends, Butterfly waits every day for the harbor cannon to boom his return. An offer of proposal comes from wealthy nobleman Yamadori, who's had his share of wives. Defiant, Butterfly spurns him. She's a married woman, an American married woman. Don't insult me.

But Sharpless receives a letter from Pinkerton, confessing he has a wife. Sharpless can't tell Cho-Cho-San, the news would kill her. Then the cannon booms. Pinkerton's ship. Ecstatic, Butterfly fills the house with flowers, puts on her wedding kimono, and serenely awaits her husband.

When he arrives, Pinkerton is so filled with remorse and anguish at how he's treated Butterfly, he can't face her and runs off. Whom does she meet? Pinkerton's wife Kate, come to take the boy to live with them in the States. It's a crushing blow. Her dreams of happiness shattered, she has one honorable option. Like her father, she must commit suicide. If I can't live honorably, I must die honorably. She bids goodbye to her son and kills herself, just as Pinkerton rushes back and cries out her name. He embraces her dead body.

This is primal opera. A dramatic culture clash set to the most ravishing and evocative music, Butterfly is the best of the best. Even though conducted by legendary Arturo Toscanini, the work didn't fare well at its La Scala premiere, booed and hissed by an anti-Puccini claque, ready to hurl brickbats at the scandalous affair between maestro and leading soprano Rosina Storchio, and eager to show displeasure at its dissonant un-Italianate sound they weren't ready for. Wisely, Puccini, a true theater junkie like Verdi, reworked the opera, cutting, pruning, refining, into the shape we have now – very nigh perfection. A year later at its second christening, Butterfly flew high indeed and has never stopped soaring.

In Puccini there are climaxes within climaxes, grand musical statements that take your breath away with thundering brass and timpani, contrasted with delicate phrases for pizzicato strings and harp that could paint an intimate watercolor. But recently, poor Butterfly has come under scrutiny from the Easily Offended, our 21st-century's Church Ladies who clutch their pearls and swoon on their divans for nuggets of “cultural appropriation” and “insensitivity” for actors' use of yellowface and the thought that a European composer could ever possibly depict Japan. If that's the case, a lot of invaluable art will have to be tossed in the trash and, most importantly, all singers of Asian descent – and, now, fortunately, there are many supremely talented young ones in our international opera houses – will be relegated to singing only Butterfly, Nixon in China, and Turandot. Nobody wants that. Why deprive us of hearing any singer in any role?

In its co-production with Los Angeles' Pacific Opera Project, Opera in the Heights addresses this contemporary problem with classical restraint and immense intelligence. Since the characters in Butterfly are Japanese and American and can't possibly understand each other, why not translate the original Italian libretto into Japanese and English? Makes sense to me. American consul Sharpless speaks both, as does matchmaker Goro, so they translate for the others, whispering to them what the others say. It may be the ultimate gimmick, but it works exceedingly well and is dramatically true to the story. It may be odd to hear Cio-Cio-San's famous aria “Un bel di vedremo” sung in Japanese, but, whatever language, it remains stupendously beautiful.

POP's artistic director Josh Shaw is responsible for the production's concept, direction and lovely set design, and OH's maestro Eiki Isomura provides the fluid Japanese translation and the transcendent musical arc that is Puccini's. Under his galvanic baton, the orchestra sounds like a Philharmonic.

The cast is superlative, with the major Japanese characters sung by Asian-Americans. Soprano Keiko Clark is a wondrous Butterfly. Although no one would think she is 15 years old (no fabled interpreter in the entire history of Cio-Cio-San has ever been believed to be a teenager), she possesses a lucent instrument, lyric and pure, forceful and distinct. She never falters in dispensing clear, elegant sound, and her joy at Pinkerton's return is heartfelt and terribly moving. Young tenor Peter Lake, as bounder Pinkerton, amazes with a clarion tenor that has the reedy projection of superstar-from-yore Jan Peerce. He has no problem whatsoever in bursting forth those treacherous extended Puccini high notes, and his love duet with Clark is a masterclass in projection and passion. His English diction throughout is exemplary; take note HGO. (Their recent world premiere The Phoenix, sung in Italian and English, is indecipherable.) No surtitles for Lake, thank you very much.

Maid and confidante Suzuki is sung by powerhouse mezzo Kimberly Sogioka, who's another artist on the rise. What a lively interpretation of Cho-Cho-San's protector, adviser, and conscience. Her “Flower Duet” – one of this opera's many highlights, where she and Butterfly strew blossoms in anticipation of Pinkerton's return – is true rhapsody. At the music's climax, more blossoms start to fall, enveloping the two singers as if in benediction. It's a sublime moment, radiantly staged, radiantly sung. Consul Sharpless is in the most capable hands of baritone Kenneth Stavert, who acts as well as he sings. And he sings with undiminished force and conviction. Tenor Eiji Miura is oily Goro, flipping out his fan book of prospective brides and insinuating himself with his new foreign masters; and baritone Hisato Masuyama, as deeply offended Uncle Bonzo, casts his curses on poor Butterfly like a booming gong. His entrance is a showstopper, as is he.

On the intimate OH stage, Butterfly seems enlarged with its shoji-screened house, cherry tree bowers overhead, and bamboo-stepped walkway on which to spy the harbor below. It looks so fragrant, you can smell the flowers. Jim Elliott's atmospheric lighting and Sueko Oshimoto's eye-stunning costumes deeply enhance the mood.

Butterfly is one of three Puccini operas always in the top-ten-performed operas in the world. The other two, of course, being Boheme and Tosca. But Butterfly is different. Yes, it's a tearjerker melodrama from the 19th century, derived from a fantastically popular David Belasco play that Puccini saw in New York, which was based on a novel by Pierre Loti and a famous autobiographical short story by John Luther Long, but the great Italian composer gave it renewed life. He imbued the tale of the Lady of the Chrysanthemums with genuine heart and gut-wrenching emotion. He was as inspired by the Orientalism as were Gaughin and van Gogh in Paris and Gilbert and Sullivan in London. It was a new world to be explored by the West, to bring the lives of “others” to the fore. It was not appropriation, it was love. It was art.

As long as there are places to stage it, Madama Butterfly will be with us – evergreen, fresh, incandescent. Opera in the Heights' production, one of their finest, helps secure this work's place in the firmament. I predict this Japanese/English translation will travel far and high, just like the original.