Art Car Parade Revs Up For Its 35 Year Anniversary 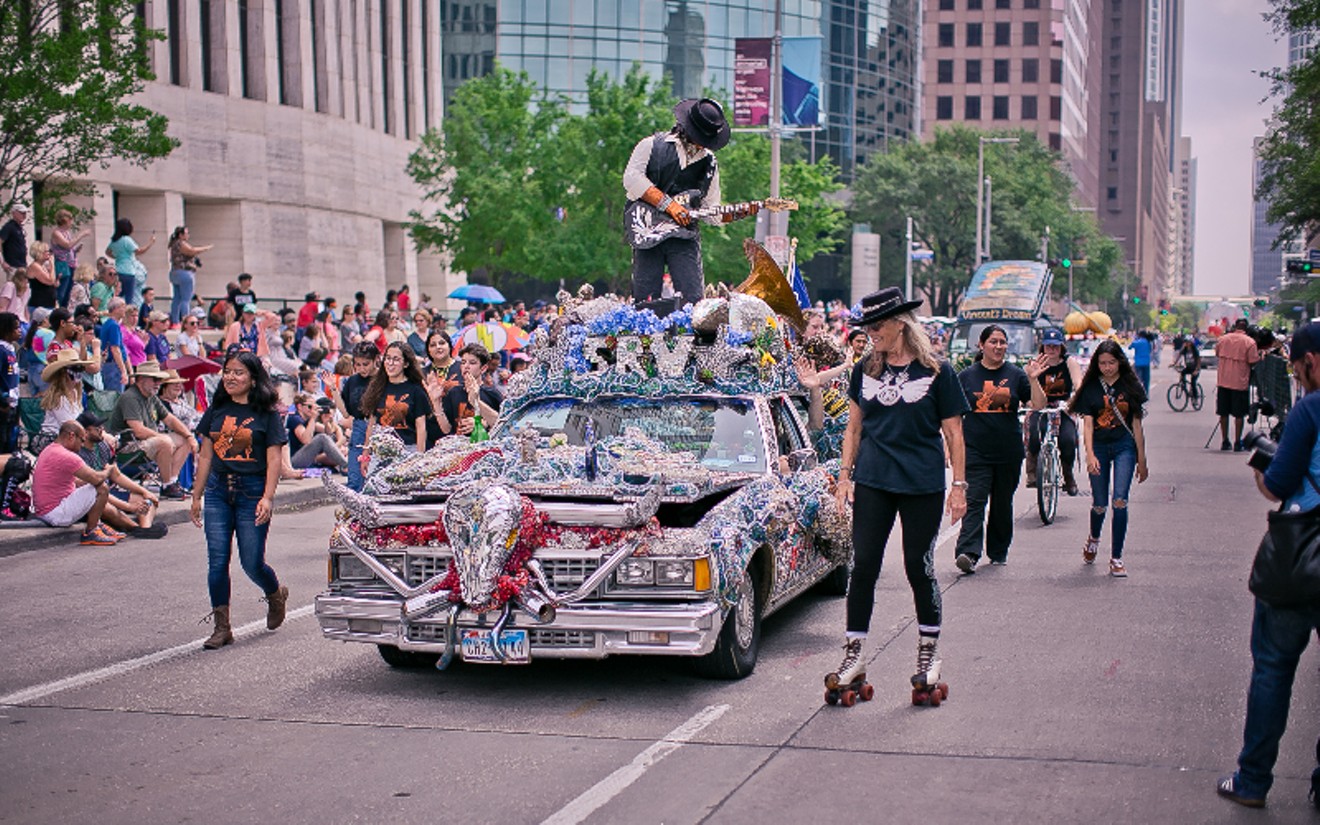 Is it art? Is it a car? Is it both? Photo by Morris Malakoff
The announcement has finally come: Art cars are back. The Orange Show Center for Visionary Art will host the long-awaited 35th Annual Houston Art Car Parade Weekend, presented by Team Gillman. Vehicles, bicycles, rollerbladers — anything with a wheel — will take over H-town this week following a two-year hiatus due to COVID-19.

The Orange Show’s signature event – arguably Houston’s most iconic and beloved annual celebrations – returns with a vibrant lineup of events and activations that will celebrate and showcase more than 250 mobile masterpieces from across the country and engage the public with opportunities to express their personal artistic vision.

"The fact that we are able to bring the parade back safely to the public after a two-year hiatus is what we're incredibly excited about. In particular, there's over 100 new vehicles that have never been seen before, which I think might be a symptom of artists having some time on their hands over the last few years," said Tommy Ralph Pace, Executive Director for the Orange Show Center for Visionary Art.

The Art Car Parade, of course, is actually more than just a rip-rolling two hour event. The celebration is spread out over the course of several days.

Wednesday, the organization will present a lecture and film depicting immersive and visionary art with David Best at 6:30 p.m. at the Art Car Museum, 140 Heights Boulevard.

Big wheels keep on turning at the Houston Art Car Parade.
Photo by Morris Malakoff
On Thursday, get ready for the Main Street Drag at 9 a.m. Designed to bring the parade to the people, the Main Street Drag is an opportunity for art cars and their artists to visit schools, hospitals, nursing homes, developmental facilities, and other locations where its residents or attendees may not be able to participate in Houston Art Car Parade Weekend events on their own. A series of mini-parades will make their way to these locations and the artists will be able to spend time showing off their works, answering questions, and giving guided tours.

Later that day, a Sneak Peek is scheduled at Discovery Green from 6 to 10 p.m. Officially kicking off the public viewing opportunities of this year’s art cars, the Sneak Peek at Discovery Green lines downtown Houston’s iconic park with nearly 100 art cars and encourages individuals and families to stroll through the promenade and get a first look at what’s new this year.

On Friday, it's the Legendary Art Car Ball from 6 to 11 p.m. at the Orange Show World Headquarters, 2401 Munger Street. Often considered the wildest and most colorful party of the year, The Legendary Art Car Ball draws thousands of art and music-loving attendees on the eve of the parade to celebrate with a night of live performances, art installations, elaborate costumes and hundreds of awe-inspiring illuminated art cars.

This year’s Art Car Ball will feature Austin’s avant-garde space Jazz ensemble Golden Dawn Arkestra, as well as the world premiere of The Suffers’ Kam Franklin’s newest project Bayou City Comeback Chorus. In addition, performance art from Ms. YET and the Renegade Carnies, immersive projection art from INPUT/OUTPUT, as well as sounds from DJ Boogie Soul and Houston’s A.S.S. will thrill and amaze. 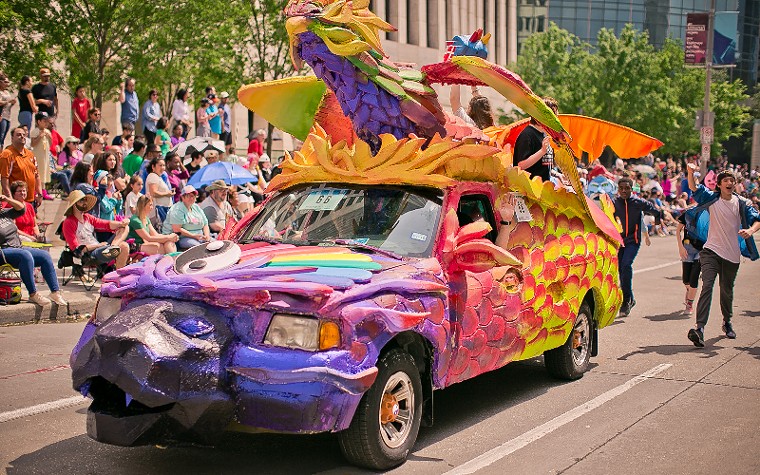 Celebrating 35 years, the Houston Art Car Parade Weekend actually starts Wednesday and rolls through Sunday.
Photo by Morris Malakoff
Saturday is the big day. It includes a Starting Line Party at 11 a.m. at Allen Parkway and Heiner Street. Live music, food, drinks, and some great sponsor activations are in store for guests. A Kids Zone will open at Sam Houston Park, 1000 Bagby, featuring an array of creative activities for both kids and adults alike.

The VIPit Experience at Hermann Square begins at noon. Centered on the grounds of Hermann Square in the shadow of City Hall, the VIPit Experience offers guests incredible views of the Houston Art Car Parade as it rolls through Downtown. Included in tickets is a gourmet lunch from some of Houston’s best restaurants, cocktails, pre-parade entertainment, a kids creative area, live parade commentating from notable Houston personalities and nearby reserved parking.

At 2 p.m., it's time for the art cars to start rolling down the street. The route will include portions of Dallas, Smith, Walker, and Bagby Streets as well as Allen Parkway. The parade will last approximately two hours, with Allen Parkway and downtown streets opening back up at 5 p.m.

Wrapping up the weekend on Sunday is the Houston Art Car Parade Awards Ceremony at noon. During the awards, more than $15,000 in prizes, as well as an elaborate display of hand-made trophies, are distributed to artists in various categories whose entries received the highest marks from the team of judges.

Anything goes with the Houston Art Car Parade - as long as it has wheels.
Photo by Morris Malakoff
Of note, this year's Grand Marshal is legendary musician, philanthropist, and Houston's unofficial mayor Bun B. He follows in the footsteps of luminaries such as Cheech Marin, Dan Aykroyd, J.J. Watt, The Art Guys, Annise Parker, Kinky Friedman, Lynn Wyatt and George Clinton, to name a few.

"Part of what makes the Art Car Parade so special is how it can represent all the amazing facets of the city of Houston, which is an incredibly diverse and talented matrix of communities. We're absolutely thrilled and honored that he said yes. We choose every year for the Grand Marshal somebody who represents the spirit of our city and this spirit of taking a chance on the creative act," Pace said.

Also new this year, the parade’s grand prize will be permanently named the Ann Harithas Legacy Award and given out annually at the Art Car Awards Ceremony. Harithas was an artist, collector and curator, who is credited with organizing one of the first public exhibitions of art cars in Houston in the early 1980s, resulting in a wave of them being seen on Houston streets ever since.

"This year's parade is dedicated to Ann Harithas, who passed away in December. She was born into a life that allowed her to give back. She spent her entire life creating community around art. This year we'll have a large contingent of cars that she had commissioned in the parade," Pace said. "We're really excited to continue to continue her legacy of supporting this amazing movement by naming the top award every year forward in her name."

Interestingly, another aspect of the Art Car Parade is that it allows the chance for students to learn how arts fit into a STEM education. Through the Orange Show Center for Visionary Art’s partnership with Houston Independent School District, Art Car Weekend will continue its tradition of integrating Art Car-related programming into the curriculum of select schools throughout the district, resulting in dozens of participating schools and youth groups who have designed and built art cars under the instruction of their teachers or mentors.

"We have about 30 schools participating in the parade this year. One of the amazing things is the [art that thrived despite the] incredibly limited ability for schools to get together in groups during the pandemic to work on a project. It's really a hats off moment to the education system here in Houston. We're excited to celebrate the students' work, and we hope to see even more schools participating next year," Pace added. "I think it just goes to show really what an amazing creative force is in Houston."

Following on the success of the Art Car Parade, the organization will launch the an Art Bike Festival on May 21. It distributed more than 150 bikes to classrooms throughout HISD in 2019, and two years later, the moment has finally arrived for the work to be displayed.

In reflecting on the Art Car Parade's history, Pace said, "This is more than just a parade. When you do something for this extended period of time, it really becomes an artistic movement. The art car community has become culturally rich from this activity. It really is a an artistic movement that's been developing in a in a modern city over 35 years."

Art Car Parade Weekend lasts Thursday through Sunday at various locations. For more information, visit thehoustonartcarparade.com. Most events are free. Tickets for The Legendary Art Car Ball start at $35. Entry to the VIPit Experience at Hermann Square start at $175.
KEEP THE HOUSTON PRESS FREE... Since we started the Houston Press, it has been defined as the free, independent voice of Houston, and we'd like to keep it that way. With local media under siege, it's more important than ever for us to rally support behind funding our local journalism. You can help by participating in our "I Support" program, allowing us to keep offering readers access to our incisive coverage of local news, food and culture with no paywalls.
Make a one-time donation today for as little as $1.