Putting the L in LGBT: Tina Sabuco’s Imagination Is Limitless 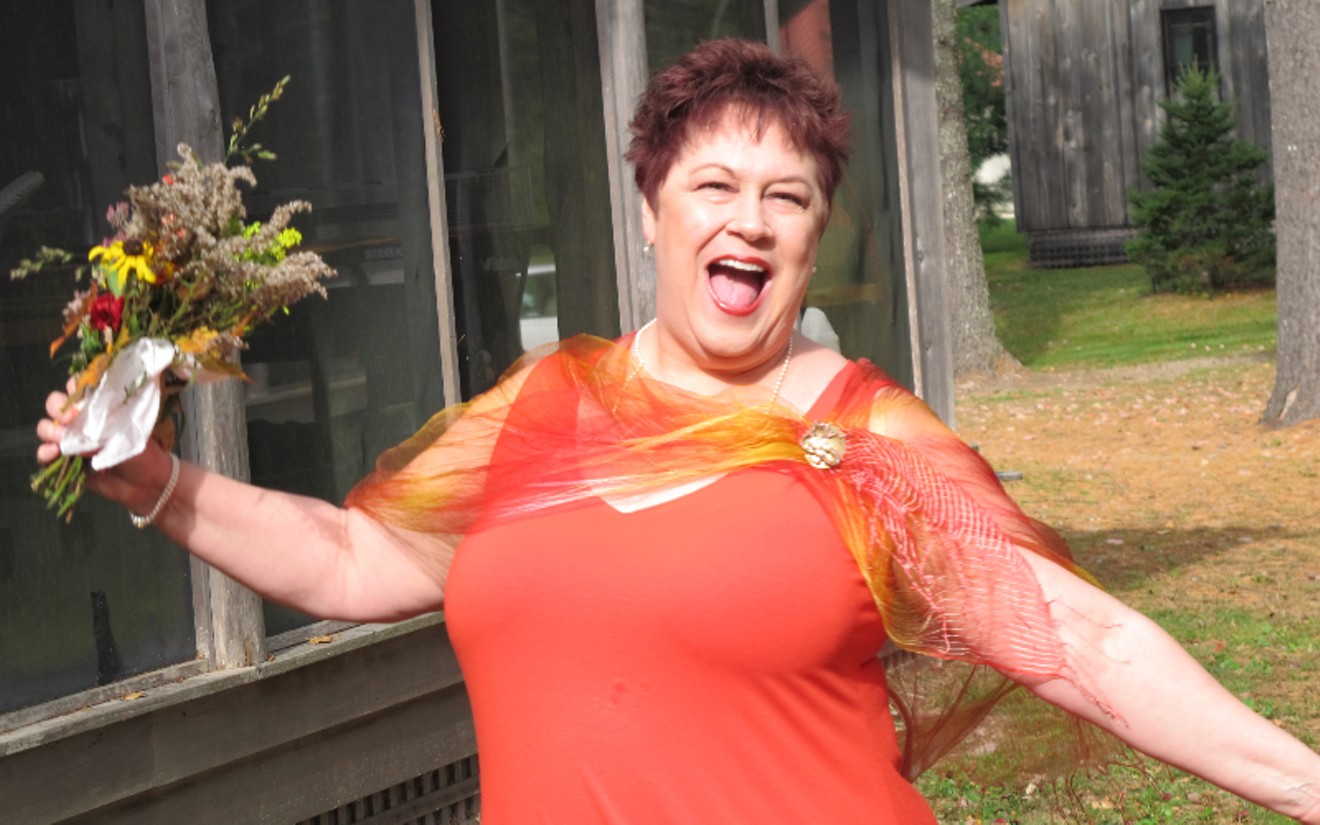 Tina Sabuco is the blushing bride at her wedding. Photo by Melanie Leo-Daigle
June is the anniversary of the Stonewall riots, often regarded as the tipping point in the modern gay rights movement and earning its recognition as Pride Month. Houston Press met with members of the LGBTQ community to learn more about their experiences belonging to this group. These are their stories.

Growing up in small-town Michigan, Tina Sabuco let her imagination run free. She was an only child whose family lived above the 24-hour restaurant they owned. Since her family was dedicated to the restaurant, she kept herself busy with creative outlets to bring her unending entertainment and joy. In high school, she became heavily involved theater and dance, where she was surrounded by accepting and eccentric people – so surely nothing about her really stood out or shocked anyone among her peers. But during her college years at Northern Michigan University, she made a discovery that has shaped her life ever since.

“That’s when I realized I was falling in love with my best friend, Nance. I still had a boyfriend, and I had to try to let him down easy. It was not easy for him that I was in love with somebody else and that it was Nance. She and I were together throughout the rest of my time in college in Michigan, and then we moved to Austin for me to go to graduate school,” she said. “I never felt like I had a coming out where I was like, ‘Hello, world. I'm gay!’ It was more like a smooth transition. I didn't feel judged or afraid. I felt that it was natural.”

As first loves often go, the courtship between Sabuco and Nance was not meant to be, but Nance and Sabuco remained close even after their breakup. Sabuco also left with a better understanding of herself, and lucky for her, love would not make her wait too long to meet her partner, Shellye Arnold.

“Nance and I have been, as often happens in the lesbian community, the best of friends. I am her daughter's godmother. And there was not too much time between the end of dating Nance and when I met Shellye. She and I got together in 1989 and have been together ever since.”

In the meantime, there was another relationship brewing in Sabuco’s life – this one with the arts.

“I had a dance background, and I had a theatre background. I did not have a formal visual arts background, but my dad used to draw with me, and I grew up surrounded by music. When I was in graduate school, I was working for a company called Dance Associates, and I realized that when I was teaching dance to preschoolers, I really was using all the other arts to teach dance. For instance, if we were learning how to do a relevé – to be on our toes and lift our heels – I didn't worry about the technical terms. [To help them learn the foot placement, I would instruct the students] to reach up high to get apples from the tree,” Sabuco recalled. “One of my professors who was my mentor told me that what I was doing has a name: integrated arts. I was using all the arts together to teach.”

This style of teaching became the focus of her thesis, and it would provide the steppingstone to her future career. “I basically wrote my thesis without knowing I was creating the business that I was going to be doing. I just wrote it because it was a passion, and it was what I loved. I was sharing my methodologies and my philosophies on how to teach dance to preschoolers and make it fun for everybody,” Sabuco remembered.

Shellye Arnold and Tina Sabuco with their pup pack – Cooper, Mahoney and Elvis.
Photo by Amanda Jones
She and Arnold moved to Houston, and Sabuco finished writing her thesis. She was implementing the work at various places around town, and her teaching methods snowballed from there.

“Pretty soon, I was going to conferences for pre-school teachers, then I started teaching in the schools and preschools, and I realized I needed to do this all the time. So, I created Arts Alive!” she said. “I was seeing that a lot of children, even though they were very young, were being told exactly what to do and how to do it. Imagination was coming second. I really felt that I had a lot to offer as far as the joy that it brings to be told that you can you do whatever you want to do and be whatever you want to be. That's how I grew up. I always loved the arts, I love teaching, and I love kids, so Arts Alive! put it all together.

On its website, Arts Alive! is described as a curriculum enrichment program that unlocks the part of a child’s brain that is not typically developed in an academic setting. The programs take the joy of movement and the creativity of the arts and use it to teach children to activate the higher-order thinking center of their brain. Science supports that stimulating this often underdeveloped part of the brain sets up students for higher academic success and stronger problem-solving skills, both of which are important for long-term success at life.

So far, Sabuco has experienced many successes both with her business and with her relationship with Arnold. Arts Alive! has been in operation for more than 25 years, and the Sabuco-Arnold family counts not just one but two weddings in their history. They entered a civil union in 1996 in Austin, and they again married in 2013 in Maine.

While living openly as a member of the LGBTQ community has mostly been a positive experience, Sabuco says she can remember a few occasions where she experienced others’ hatred of her for simply being who she is.

“About 10 or 15 years ago when Shellye and I went to the pride parade, we were trying to meet up with some friends. We had to figure out how to get from where we were to where they were. We had to choose whether we were going to go behind the protesters or walk down the street in front of them. I thought I shouldn’t have to hide from the protestors. This is who we are. And oh, it was awful,” she said. “It was the first time where I thought people really wanted to kill us. They really want to hate. They were shouting awful, awful things at us. I thought I was going to be able to handle it. And I did I handle it until we got to my friends, and then I was physically and visibly upset.”

Sabuco said it was the first time she directly experienced something like this; however, the eternal optimist didn't let that moment rob her of the joy she knew for so long.

“It reminded me again that I am fortunate I had lived my life this long until I experienced something like that and questioned if I might be killed, threatened, or beaten up,” she added.

She feels her experience working in the arts mirrors that of the LGBTQ experience in some ways and allows others to know the same joy she knows.

“I grew up in a situation where I felt very free to be myself. I used my imagination and played on the stage in our restaurant's banquet room. Being accepted for being weird or however you are created, that is Arts Alive!. I created something that embraces that everybody can be whomever they want to be and do whatever they want to do. There is definitely a direct relationship between the philosophies at Arts Alive! about igniting the joy in everybody and being joyful in whatever you do that translates into feeling good about who you are.”

Much like Sabuco and her team eradicate the barriers of labels and circumstances to create feelings of belonging and worth, she feels that love and relationships manifest the same kind of freedom from other's perception of one's limitations.

Sabuco said, “It is true – you can love whoever you want to love.”
KEEP THE HOUSTON PRESS FREE... Since we started the Houston Press, it has been defined as the free, independent voice of Houston, and we'd like to keep it that way. With local media under siege, it's more important than ever for us to rally support behind funding our local journalism. You can help by participating in our "I Support" program, allowing us to keep offering readers access to our incisive coverage of local news, food and culture with no paywalls.
Make a one-time donation today for as little as $1.