Whatever Happened to Spider-Verse’s Doc Ock? 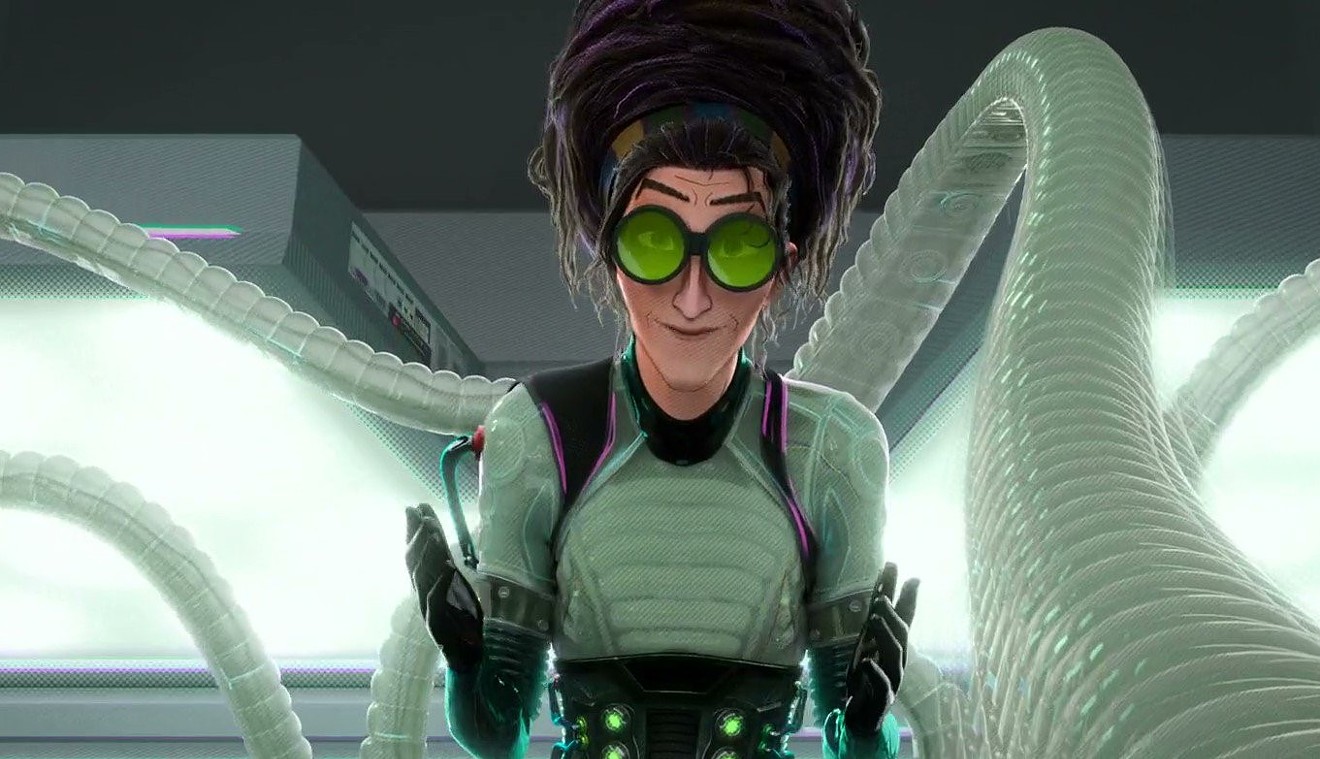 In a movie that has Nicholas Cage as Spider-man this is somehow still the best supporting character. Screengrab from Into the Spider-Verse.
The introduction of a new Doctor Octopus was one of the best parts of Into the Spider-Verse. Rather than the classic, portly evil scientist driven by equal parts narcissism and insecurity, the script gets flipped when the Dock Ock of this universe is revealed as Olivia Octavius. Having managed to avoid spoilers, I completely did not see her heel turn in the film coming until the green, pneumatic tentacles snaked out under her clothes. Since superhero film marketing is so heavily focused on the villains, it’s truly rare to have a surprise like that. The fact that the movie introduced her so perfectly without giving a hint of her real intentions is definitely an achievement in superhero storytelling.

Liv was fun, too! Doc Ock is by far my favorite comic book villain, but even I get tired of the classic version’s narcissism and insecurity after a while. Alfred Molina’s take in Spider-Man 2 gave the character Shakespearean gravitas, and the Superior Spider-Man run of comics made him a brutal anti-hero troubled by his growing conscience. Liv left all that baggage behind to focus on basics. She was a brilliant scientist who wanted recognition and was willing to be unscrupulous to get it. She has the boundless energy and lack of social boundaries of a celebrity hacker mixed with a simmering malevolence that is intoxicating, not to mention a highly original look with her new arms, octagonal glasses, and wild hippie-hair. With female supervillains still thin on the ground, and even fewer of them not dressed as bondage fantasies, Liv was one of the most refreshing additions to the Spider-Man canon in years.

Which makes it weird that she’s kind of been forgotten since the film came out.

Look at video games. Until Square Enix’s Avengers comes out, the dominant force in Marvel video games are character collector titles like Marvel Strike Force, Contest of Champions, and Future Fight. Though all three have different play mechanics, arguably the goal in each is to get as much of the Marvel roster under your control as possible through various means.

None of these games have Liv as an option. Future Fight has two Doc Ocks (classic and Superior Spider-Man), but not her. Marvel Strike Force is even more baffling. They’ve had two major Sinister Six events, but no appearance by any Doc Ock. They did tie-ins for Spider-Verse, but chose a somewhat disappointing looking re-skin of the Miles Morales Spider-Man and added Green Goblin as the villain, a character that has almost no lines in the film. Contest of Champions is full of different versions of characters, but no variations for Doctor Octopus.

Nor has she shown up in comics yet. The major crossover event Spider-Geddon happened at pretty much the same time that Spider-Verse came out, and it’s not like Marvel was unaware of the re-vamping of one of their most famous characters and couldn’t direct writer Christos Gage to include her. Instead, that book got Octavia Octo of Earth-1104, a heroic teenage Doctor Octopus that clashes with her older, male version’s leadership in the conflict. Octo is fine, a joy of a character actually, but she isn’t Liv.

It would be great if Marvel realized the lightning in a bottle that they had with this character and actually did something with her instead of relegating her to the dustbin even when it comes to simple palette swaps in cash-swallowing mobile games. It’s not like she wasn’t well-received or Spider-Verse was a bomb. It won an Academy Award for Best Animated Film, beating out both Disney and Pixar that year.

Liv is a fairly unique character. Her power comes from hard work, not some other man’s abuse or personal tragedy. She’s personable, even funny, while never dropping her naked ambition and willingness to use force. In the film, it’s clear that Kingpin views her as an equal, at least as much as he views anyone that way. She also makes educational videos for high schools, and for some reason that just strikes me as very competent supervillain public relations on top of just being adorable.

It’s been over a year since Spider-Verse, and one of the best parts of that very, very good film is just nowhere to be found. The Marvel Cinematic Universe has been slowly incorporating the alternate dimensions into the background of the Tom Holland films (Spider-Gwen, Miles Morales, and The Prowler have small parts if you look very closely). Two of the most prominent members of the Sinister Six have already been introduced and have even managed to survive their encounters for possible future re-appearances. I dearly hope that when it comes time to have their traditional leader back in live-action films, they’ll go with Liv. She deserves it.
KEEP THE HOUSTON PRESS FREE... Since we started the Houston Press, it has been defined as the free, independent voice of Houston, and we'd like to keep it that way. With local media under siege, it's more important than ever for us to rally support behind funding our local journalism. You can help by participating in our "I Support" program, allowing us to keep offering readers access to our incisive coverage of local news, food and culture with no paywalls.
Make a one-time donation today for as little as $1.