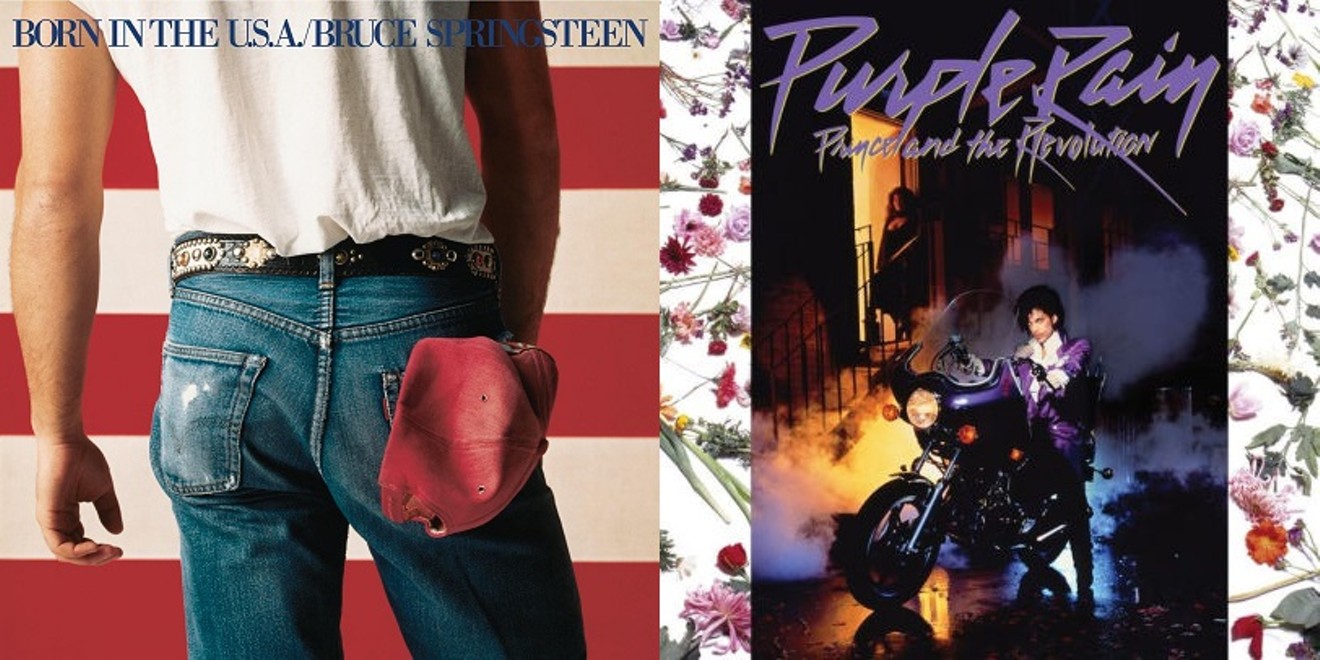 Posteriors and Prince ruled 1984's music landscape. Columbia Records/Warner Records
June, 1984 didn't simply mark the halfway point in a year when everyone was making George Orwell jokes, it also saw the release of two of the most successful albums ever. Born in the U.S.A., by Bruce Springsteen and the E Street Band, and Prince and the Revolution’s Purple Rain would ultimately become their respective artist’s best-selling work and would end up influencing countless numbers of future artists.

At first listen, they appear to be musical and sartorial  (just look at those album covers) opposites. Born is a thundering yet thoughtful rumination on life in these United States on the cusp of "Morning in America," while the sultrily electric Purple Rain catapulted Prince from his sexy R&B environs into the mainstream. Yet each would establish their creators as icons of the era. The names Bruce and Prince were held in as high esteem in the 1980s as Michael, Madonna, and Bono, and these albums were big reasons why.

When Born in the U.S.A. was released, it had been nearly a decade since Springsteen's other "natal" effort (Born to Run) prompted Time and Newsweek to run cover stories declaring him the savior of rock and roll. Thus anointed, he followed BtR up with a series of largely introspective and melancholic efforts (Darkness on the Edge of Town, The River, Nebraska) that – while critically lauded – nevertheless seemed to indicate the Boss was settling into a more mellow singer-songwriter groove.


For Prince, the advent of the 1980s saw a steady increase in popularity/notoriety. Dirty Mind was a decent hit, and followed by the even better selling Controversy. His blend of rock, funk, and R&B fueled a true mainstream breakthrough with the release of 1999, and gave him his first top 10 single (“Little Red Corvette”). Prince was also, at the time, one of the few African-American artists prominently featured on a new network called Music Television, and this would remain the case until MTV made the (wholly altruistic) choice to lean into hip hop.

Despite their differences, both albums were born from each artist's desire to widen his appeal. Springsteen was fairly up front about wanting to make an album that would challenge Thriller, released two years prior, while Prince had taken to writing more mainstream songs during the Controversy tour. It's fairly accurate to say both succeeded (even though Springsteen never toppled the King of Pop). Further, Purple Rain cemented Prince’s status as a preeminent musical talent.

Surprisingly (but only to anyone who'd never heard a Prince album before), there was some inadvertent blowback. Prince’s reputation as a purveyor of lyrics as nasty as his grooves was immortalized when Tipper Gore heard the aforementioned “Darling Nikki," prompting her to form the Parents Music Resource Center, whose “Parental Advistory” stickers were instrumental in telling aspiring delinquents like yours truly which albums to seek out.


Meanwhile, the downbeat themes of Born in the U.S.A. largely flew over the heads of those who only listened to the chorus of the title song. Springsteen, the writer of tunes about the decline of the American Dream like “Racing in the Street” and “Johnny 99,” wasn’t exactly amused to find Ronald Reagan had misinterpreted his anti-war anthem. Then again, perhaps he shouldn’t have made it so … anthemic.

BitUSA and PR also heavily benefited from the growing power of MTV. Five videos came out of Born in the U.S.A. (three directed by John Sayles, for the handful of you who care), while Purple Rain produced three (or four, depending on whether or not I hallucinated the existence of one for “I Would Die 4 U"), and all but “When Doves Cry” were pretty much performance clips/scenes from the movie. Not that anyone was complaining.

Thirty five years later, it can be argued both albums are – if not the greatest released by the two artists – only a place or two off first. Sign o’ the Times might edge out Purple Rain in terms of sheer ambition, and many will argue Darkness or Born to Run (or a curated selection from Human Touch/Lucky Town? Just me?) are better than U.S.A. What's not up for debate is how each made their creators household names, and irrevocably altered the landscape of American music.
KEEP THE HOUSTON PRESS FREE... Since we started the Houston Press, it has been defined as the free, independent voice of Houston, and we'd like to keep it that way. With local media under siege, it's more important than ever for us to rally support behind funding our local journalism. You can help by participating in our "I Support" program, allowing us to keep offering readers access to our incisive coverage of local news, food and culture with no paywalls.
Make a one-time donation today for as little as $1.