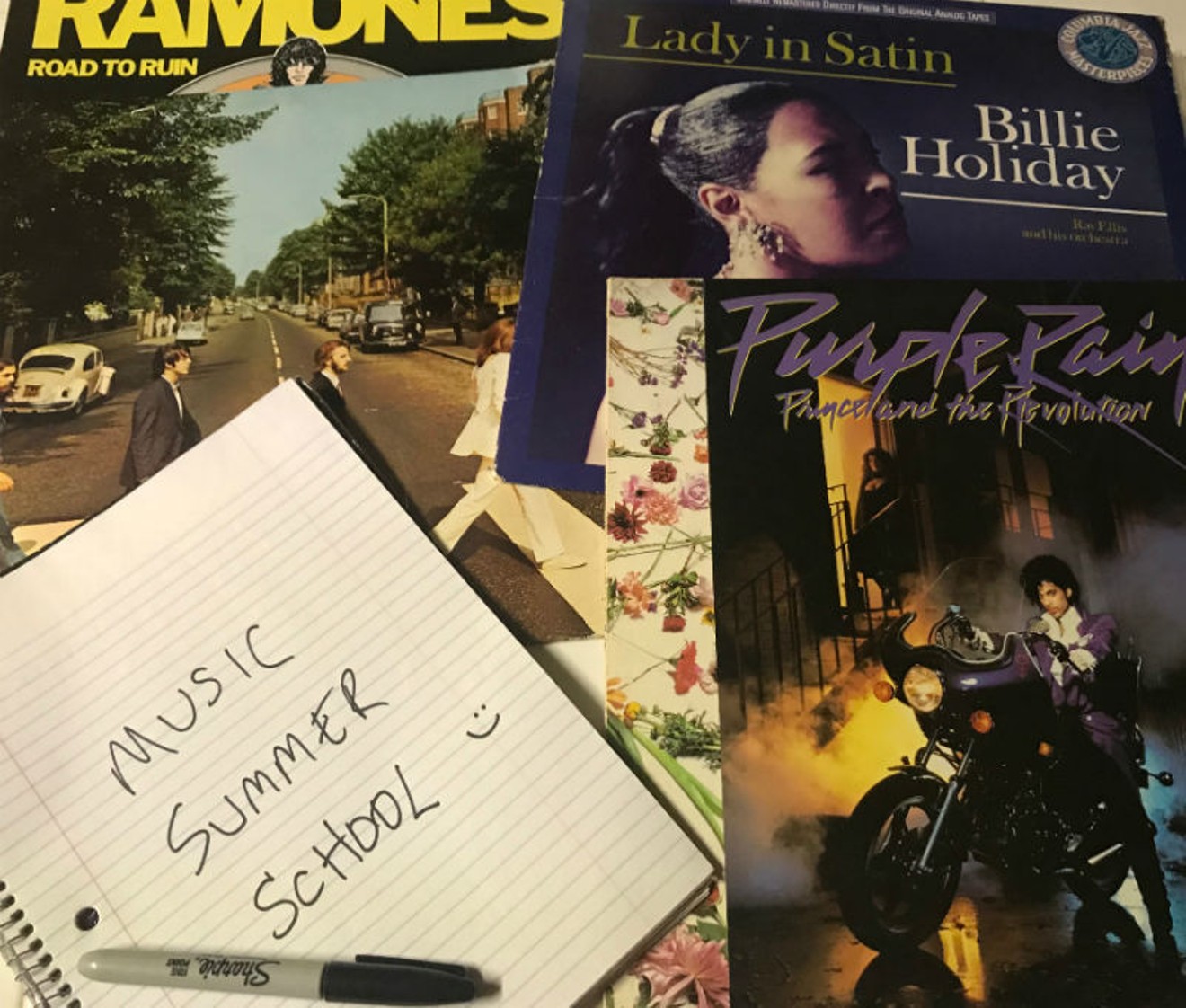 Class is now in session Photo by Jesse Sendejas Jr.

Summer break! Finally, the hard-working students in our lives get a welcomed and deserved respite from sleepy bus stop mornings, insufferable teacher’s pets and the anxiety of knowing that a sublime mid-class daydream could get abruptly extinguished by the dreaded pop quiz. Congrats, kids, enjoy sleeping in, goofing off and lazing about for a couple of months.

One thing that doesn’t have to stop over the summer break is learning. Since music is our favorite subject, we’re proposing a little “summer school” for the kids, a crash course on the artists every true music lover should know. We asked some friends – school teachers, music teachers and musicians – for a little help building our curriculum and they offered diverse and intriguing options to stoke any student’s interest in the subject. They even devised a lesson plan or two to help drive the lessons home.

A team of about 20 pieced the course together. They all named artists from a wide range of genres and periods they see as crucial to building a healthy music appreciation. Some, like Herbie Munster from Georgia’s Here Be Monsters offered lists of acts. His choices? Claude Debussy for classical instruction, Robert Johnson (mentioned by several of the course-builders) for blues, Django Reinhardt (jazz), Sister Rosetta Tharpe (rock and roll) and Rage Against the Machine for modern rock.

“I think you want to strike a balance between showing them things you know they'll enjoy and relate to and things that push their boundaries a little, “ he said of building a syllabus that engages students. “The first could be something simple and catchy like the Ramones or something you know your students are already interested in, like hip-hop. Depending on how weird you want to get with the second part, or what music you're starting with, you could look into something like Stravinsky, Coltrane, P-Funk, Fela Kuti, etc.”

Clay Melton is one of Houston’s busiest musicians. The guitarist/vocalist is currently on a national tour with Houston's own The Voice phenom, Sarah Grace and the Soul, but they’ll all be back in town for June 15’s Local Brews Local Grooves show at House of Blues. Melton's own band has shows this month in Dallas (June 14) and Austin (June 20). This busy fellow also instructs music and works for Soundscape Studios, run by fellow musician Nathan Quick, at several HISD elementary schools.


“I always give kids a run down of blues and jazz in America. How it started and grew to influence what rock and pop would become,” Melton said. “It’s cool to show them Robert Johnson tunes to get an idea of what blues sounded like then. There’s so many different routes of music history and appreciation you can take from there, but I like to get them excited about where the rock, country, pop, (other) songs that they love came from as a start.”

Kristy Loye is a teacher and a music fan. She considered any class focusing on music as a chance to do a little  book learnin’, too.

“First, a history lesson in the Harlem Renaissance. The blues and jazz that were borne of this period was the catalyst for everything — country, rock, beat poetry, all the good stuff can trace its roots to some post modernists here,” Loye suggested. “Plus, these guys were first generation free men, born to parents who knew slavery. Many couldn’t read music and were self-taught. I’d start with some rare Langston Hughes recordings before slam poetry was a thing.”

“My old music teacher in elementary school got everyone sparked with scores to soundtracks,” said Daniel Torres, band manager for The Grizzly Band, which just released its swan song album, Anywhere But Home. “I vote John Williams. As soon as one of his pieces starts, you’re hooked. Superman, Indiana Jones, Star Wars, Jurassic Park, Harry Potter, Jaws. When I hear the ET suite.... transported! Genius!”


Lots of our team advocated for building the full course around singular, phenomenal talents, similar to something we recently suggested with British music chameleon Joe Jackson. David Landry, from Houston intellectual hip-hop act Dirty & Nasty, said “I would always include Tupac. Period. That would be for not just rap, but music appreciation period. You could break down the samples used for the songs, as well as figurative language that he uses in his lyrics.” The nimble-fingered Houston guitarist Roby Deaton stumped for the late prog rocker Keith Emerson because “He bridged the gap between classical and rock.” Paper Sparrow singer/songwriter Matthew Kinard said, “Beside all the obvious, personally I would say Elliott Smith. What poetic lyrics, beautiful melodies, well-constructed songs. Every song was extremely heartfelt and accessible.” Paper Sparrow performs next at MOD Coffeehouse in Galveston on June 15.

“This might seem strange, but the Beastie Boys, to me, are one of the most important groups of all time,” said Aaron Meade, of Arizona’s Whistlepig. “From the perspective of kids that age, their early works may seem funny or relatable; but, as their music evolved, so did their outlook on society and politics. One of the only pure examples of accountability and growth in pop culture. Not to mention, upon the release of Ill Communication, they defied all standards of genre. Punk, hip-hop, soul, funk - they had all of it.”

Speaking of originators, Houston blues man Oliver Penn said, “For me, James Brown has to be included in a music appreciation course. Not only did he pave the way for soul music and R&B to become funk music, he also pioneered hip-hop music. A lot of his lyrics were rap-esque, and his music features breakbeats performed by the ‘most sampled drummer of all time,’ Clyde Stubblefield. Those are two genres that wouldn’t be the same without James Brown’s contributions.” Penn is working on new music and can next be seen locally opening for Shinyribs July 20 at Dosey Doe.


“Tool would be essential in my summer school music appreciation class for middle/high school aged kids,” said Steven Powell, aka DJ NURSIC: The Nurse DJ. NURSIC is a former music teacher and keeps educating folks today via a KTRU Rice Radio show. “Key reason being they are a great gateway in understanding music theory and what can be done beyond the cookie cutter structure of songs on the radio. Admittedly, I am biased as I discovered Tool at age 13.”

Brian Arthur, owner at Super Happy Fun Land, built a Mount Rushmore of music appreciation from “Roky Erickson, Syd Barrett, Daniel Johnston and Brian Wilson. There is a lot to learn from mad genius. Interesting that two of these are from Texas.”

We left the final word on the matter to a few teachers, the professionals who work diligently to ensure our future thinkers are brighter and better than we are. Vaughn Chung is guitarist/vocalist for soulful indie rockers Paper Gliders and founder of Chung Music Academy. He leaned heavily on teaching today’s kids about the classical composers who were some of music’s first superstars. He chose J.S. Bach representing Baroque, Mozart (Classical), Beethoven (Romantic) and Claude Debussy (Impressionist). He included an early 20th century classical revivalist of choice, Nicolas Slonimsky. He too tabbed Robert Johnson, along with George Gershwin, as early 20th century jazz and blues musts, with B.B. King and Miles Davis for mid-century picks. He said Queen is “one of the most diverse in this (rock) genre" and felt The Strokes are influential for “incorporating classical technique into a rock and roll approach, which was pretty essential to what we call ‘indie’ today."


Those are impressive and inarguable selections. Kelly Dean, a versatile veteran Houston musician who is also Instrumental Music Instructor at The Emery/Weiner School, takes a different approach.

“I get a lot of joy meeting them where they are,” Dean said of his students. “Where some people view a song like ‘Old Town Road’ as anathema to ‘real’ music, I see it as the perfect launchpad, and the happiness students derive from playing along with their favorite songs is undeniable. Besides, that G#/Ab is the same one that everyone has used for over 500 years. The songs have changed but the building blocks have remained constant. I actually find personal solace in that, knowing that there’s a through-line between J.S. Bach and anybody else ever.”

“We talk about a lot of music history and culture in my class at YES Prep Gulfton,” said Jeff Paxton, Jr., of rock act Minor League. He facilitates lots of music to Houstonians as the city lead for Sofar Sounds here.

“I used to feed kids with a steady diet of ‘important’ music like The Beatles, Zeppelin, Nirvana, Dylan, but recently I've changed my focus to helping them to appreciate the significance of the music they already listen to and it's place in a long tradition of popular music. If we listen to James Brown, it's so they can better appreciate the importance of Bruno Mars. If we listen to Nirvana, it's so they can see the connection to modern day ‘voices of a generation’ like XXXTentacion and Lil Peep. My music won't be their music, but it can help nurture a deeper appreciation and understanding of modern artists and important musical trends.

“So, all that to say,” he said, “we don't listen to ‘important’ music very often. We listen to their music and try to unpack it, piece by piece.”
KEEP THE HOUSTON PRESS FREE... Since we started the Houston Press, it has been defined as the free, independent voice of Houston, and we'd like to keep it that way. With local media under siege, it's more important than ever for us to rally support behind funding our local journalism. You can help by participating in our "I Support" program, allowing us to keep offering readers access to our incisive coverage of local news, food and culture with no paywalls.
Make a one-time donation today for as little as $1.