Say It Is So: Hall & Oates And Squeeze Rocked The Woodlands Last Night 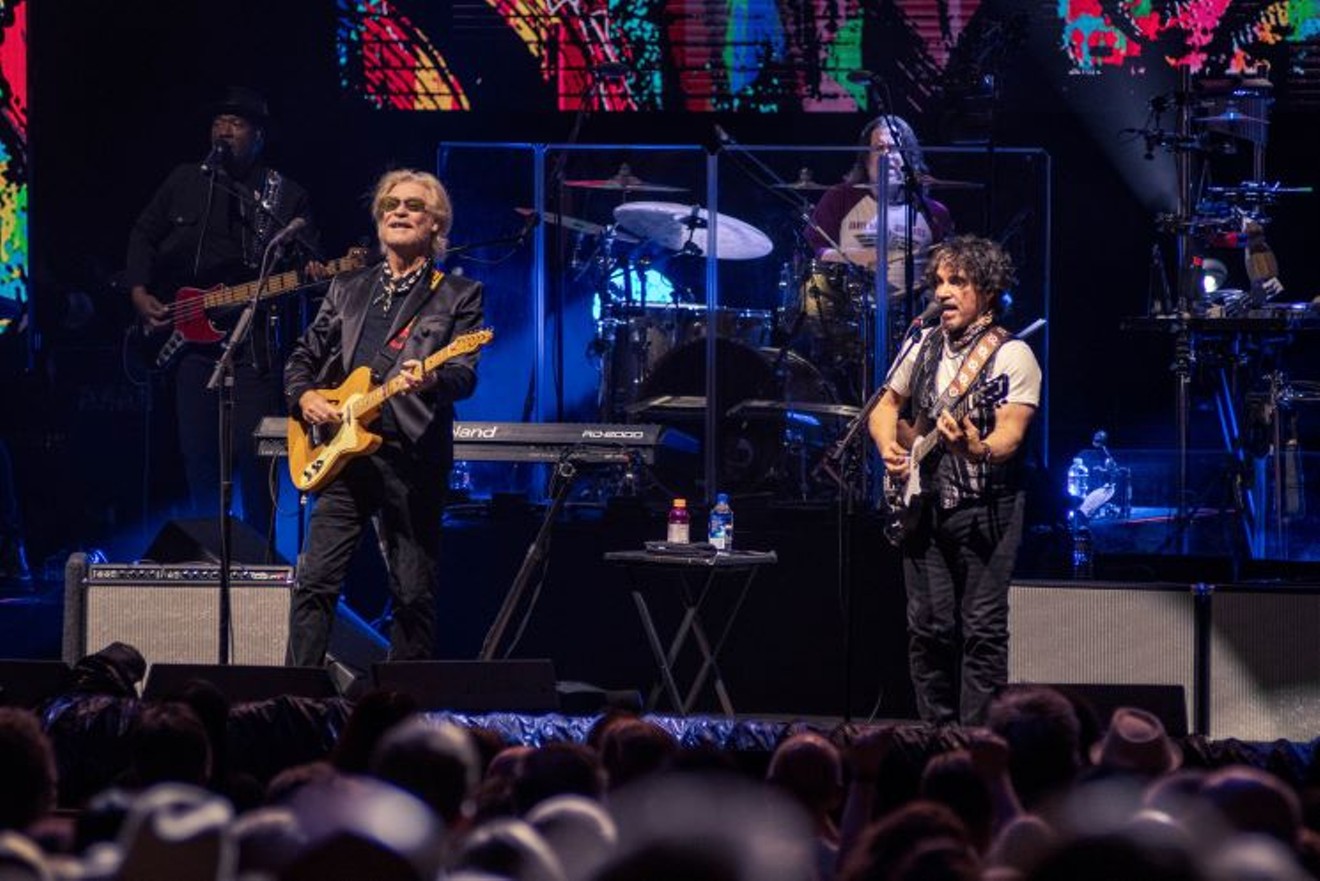 If you were aware of music in the 1970s and '80s, then you heard Hall & Oates. The Rock and Roll Hall of Fame hitmakers were nigh ubiquitous during that era, elbowing their way to prominence amidst the rise of new wave, punk, and metal. Daryl (Hall) and John (Oates) embodied the apex of the so-called "blue-eyed soul" era, even if they would later decry the term itself.

For their part, Squeeze were widely heralded in their native Great Britain (founders Chris Difford and Glen Tilbrook were compared to Lennon & McCartney back in the day), but were never as lauded on this side of the Atlantic. The band was tagged as everything from post-punk to pop, making the pairing of the two at last night's Woodlands show one of those curious label bedfellow things you sometimes run across.

Whatever the powers that be had in mind in putting the two together at the Pavilion (in a show originally scheduled in 2020), it worked. Maybe it was the pleasant evening, or maybe the happiness of crowds returning to live shows was reflected back by the bands themselves.

Maybe everybody was high, I'm not ruling anything out.

Your first thought upon seeing the members of Squeeze hit the stage in a variety of jaunty suits may have been, "My, they look quite dapper.” Your second may very well have been, “They have enough people for a ska band.”

The band tore through what Tilbrook referred to as a Supermarket Sweep style set, consisting of most of the band's better known cuts — "Take Me I'm Yours," "Pulling Mussels (From the Shell)," a singalong version of "Tempted" (perhaps to mask the absence of Paul Carrack) — and a few obscure selections. I'm not sure who thought to include "Please Be Upstanding," 2017's tribute to erectile dysfunction, but what the hell. If there was any complaint, it was that the mix was unfortunately muddy on the low end.

Hall & Oates took the stage and were pretty clearly having a good time. Hall told us it was "Good to see you Houstonites" and remarking to Oates at one point that "This is gonna be a good one." Bullshit? Maybe, but he had a grin on his face the whole time and was clearly digging the vibe. His vocal chops sadly aren't where they were 40 years ago, but his enthusiasm was infectious
click to enlarge

And now I've used John Oates and "shredding" in the same sentence. Time to burn my Iron Maiden Vans.

H&O weren't touring behind a new release (their most recent: 2006's Home for Christmas), and the set consisted almost entirely of hits (though not all). Starting with 1973's "She's Gone" (the 6th song) on through their Reagan Era heyday ("Private Eyes," "Maneater," "Say It Isn't So"). The only obscure tracks were probably "Back Together Again" and "Is It a Star," from War Babies.

Incidentally, “Is It a Star” might be their most recognizably '70s track. With that organ and sax, it wouldn’t have been out of place in the background of a Barney Miller episode (that’s a compliment, by the way).

Speaking of which, longtime H&O saxophone player Charles DeChant looks so much like Brent Spiner in Independence Day I couldn't stop thinking about it every time he took the stage.

The band's enthusiasm was infectious, from the rollicking "You've Lost That Loving Feeling" to the four-song encore that closed out with "You Make My Dreams." But without other hits like "Did It in a Minute," "One on One," "Family Man," or "Adult Education," the set was kind of perfunctory. Then again, this is Houston, and people would've started heading for their cars by 10:30 anyway.

Personal Bias: I probably considered myself too cool from school when Hall and Oates were at the height of their powers, but they certainly grown on you.

Overheard In The Crowd: "Is this yacht rock?"

Random Notebook Dump: "Knowing all the words to 'Cool for Cats' is at least as formidable as 'It’s the End of the World as We Know It.'"

Going and going
Photo by Scott Shaver
KEEP THE HOUSTON PRESS FREE... Since we started the Houston Press, it has been defined as the free, independent voice of Houston, and we'd like to keep it that way. With local media under siege, it's more important than ever for us to rally support behind funding our local journalism. You can help by participating in our "I Support" program, allowing us to keep offering readers access to our incisive coverage of local news, food and culture with no paywalls.
Make a one-time donation today for as little as $1.