Nearly two hours after Tool emerged onstage at Toyota Center on Sunday night, the iconic prog-rock outfit launched into their encore with "Invincible," the fourth song from their new album, Fear Inoculum. On the 13-minute track, vocalist Maynard James Keenan offered fans what might be his most straightforward lyrics in the band's entire catalog:

"Long in tooth and soul / Longing for another win / Beating tired bones / Tripping through remember when / Once invincible / Now the armor's wearing thin / Warrior struggling to remain consequential."

Given that it's a Tool song, there's a good chance that "Invincible" is really some kind of metaphor, one rooted in a complicated mathematical equation or Carl Jung's theory of the collective unconscious. But it's just as likely that the track is a candid acknowledgement of the California quartet's current standing in the music industry, specifically regarding their concern, or lack thereof, with remaining relevant.

With nearly 20,000 fans in attendance screaming their praises, it seemed silly to even speculate on such a thing.

Guitarist Adam Jones
Photo by Jack Gorman
On tour in support of their fifth studio album — their first since 2006's 10,000 Days — Tool brought their unique brand of art-infused progressive metal to Houston for two hours of stunning visuals, some revered deep cuts and a handful of new tracks.

Clad in a black leather jacket, red checkered pants, black eyeliner and sporting a ridiculous mohawk, Keenan crouched, crawled and sauntered around the back of the stage for nearly the entirety of the show, eschewing the spotlight as guitarist Adam Jones and bassist Justin Chancellor stood front and center, flanking drummer Danny Carey.

After opening with the title track from Fear Inoculum, Tool stirred the crowd into a frenzy with the Bill Hicks-inspired "Ænima," a song that suggests the only way to fix everything wrong with Los Angeles — and California at large — is to flush it all away, preferably by means of a tectonic shift.

Later, the band performed "Vicarious," which criticizes society's obsession with tragedy and remains as relevant in 2019 as it was when it was released in 2006. In between, fans were treated to an extended version of "Schism," which likens relationships to a jigsaw puzzle with the pieces fitting together eventually.

A few notable tracks were absent from Sunday night's show - namely "Lateralus" and "Sober," both of which are crowd favorites - but no one in attendance seemed to mind. Because despite the abridged set, Tool gave the sold-out crowd exactly what they had been craving for years: a concert replete with hits and a bit of new material to mull over.

From behind a transparent curtain, upon which moving images were projected, Keenan, Jones, Chancellor and Carey took their time performing the evening's first five songs before pulling back the veil for "Pneuma," another cut off their new album. Behind the band, music videos from their heyday in the mid-90s played onscreen, depicting grotesque claymation figures in distress. 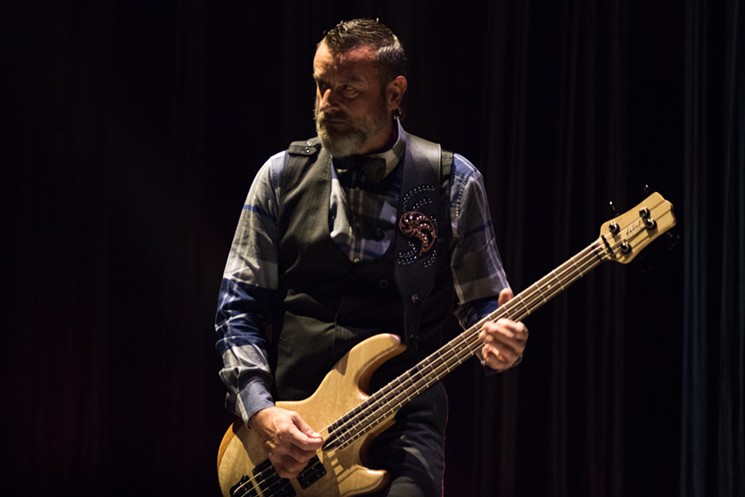 Bassist Justin Chancellor
Photo by Jack Gorman
Despite the themes explored in "Invincible," Keenan seemed to relish his standing as an elder statesman in the industry. Before "Part Of Me," a track from 1992's Opiate, the singer asked everyone in the crowd under the age of 30 to raise their hands, and about a quarter of the crowd did before he told them, "When we wrote this song, you weren't even sperm yet."

While sometimes humorous, Keenan's cantankerous tendencies were on full display on Sunday night. He had implemented a strict ban on photographing and recording from the crowd, and the aisles inside the venue were lined with security who had been instructed to remove any attendees caught taking pictures or filming.

But the curmudgeon Keenan relented near the end of the show, telling fans they would be allowed to use their phones during the final song before adding with a laugh, "Security, stand down."

Tool may be approaching vintage status, but Keenan's willingness to ease up and allow the crowd to enjoy his band's performance in a modern way was a kind gesture. Because sometimes, no matter how good a concert might be, it's not enough. You need more. Because without your phone, nothing seems to satisfy. And while you don't want it, you just need it.

To record, to post, to tag, to know you're alive.