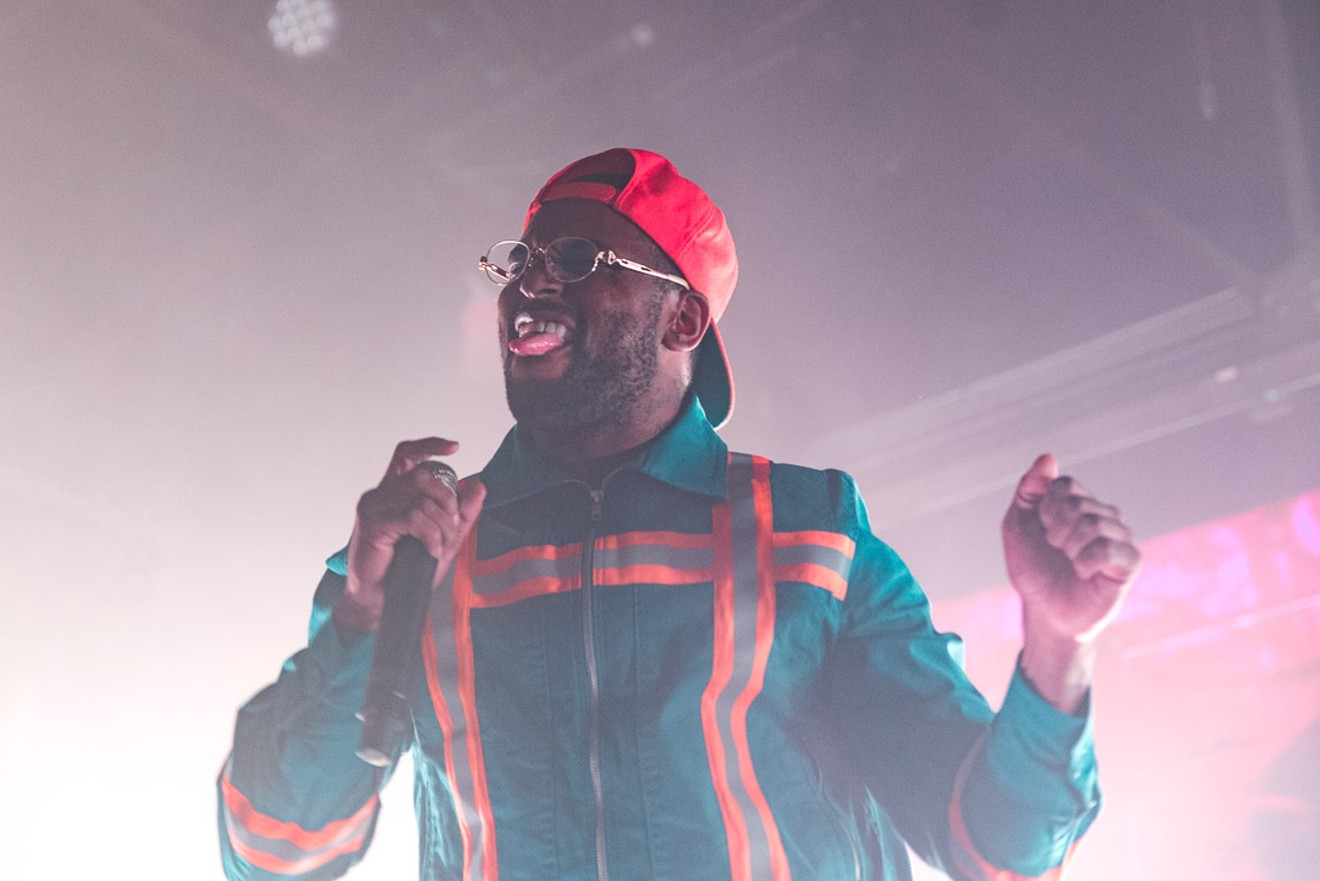 “Fuck it, I haven't done this shit in a long time” — a famous string of words, often recited right before performing a regretful act, was the last phrase uttered by rapper Schoolboy Q before removing his hat and stage diving into the crowd. "Maaan! Y'all n****s done ripped my mutha-fuckin' pants!" exclaimed the Los Angeles MC as he showed the audience a giant rip down his pant leg after reappearing on stage.

Supporting his fifth studio album, Crash Talk, the proclaimed Hoover Street Crip born Quincy Matthew Hanley, kicked off the Crash Talk Tour at Warehouse Live Monday night to a near sold out show. “So I got all new shit.” explained Schoolboy earlier in the set. (before ripping his pants) “A whole new vibe, I got my whole new character on right now and shit.” he said while showing the audience his new reflective-striped jumpsuit and stage setup.

“I should have never jumped in that mutha-fucka’, haha! You know how long it took to get that mutha-fucka’ to fit right and then I go and fuck it up the first night of the tour!” cried “Q”. 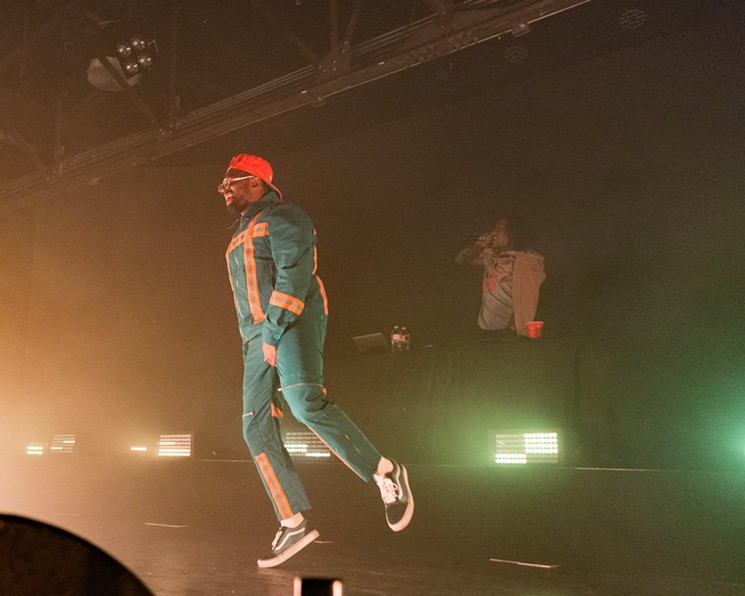 An energetic Schoolboy Q jumps on stage.
Photo by Jennifer Lake
Sporting his new gear, Schoolboy brought only his “genuine gangster” approach to rap from his past performances to his new tour. Opening with the appropriately named “Gang Gang”, the first song off his newly released Crash Talk, Schoolboy trotted out with a slow, bobbing dance that the crowd reflectively began to bounce to in synchronization. A giant screen, the length of the stage, displayed artwork and snippets of music videos as Schoolboy perform. Gritty songs like "John Muir" and "Dope Dealer" were accompanied by videos of fights and gang activities while more relaxed songs such as "Studio" and "Man of the Year" were supported by clips of pole dancing and twerking.

Bright lights changing colors in intervals, flashed behind Schoolboy as he performed. Whether from the fog machine, or the abundance of joints being passed around, every inch of the venue was filled with smoke, softening the flash from the lights, creating a colored background for the performer instead of spotlighting him.

Photo by Jennifer Lake
Schoolboy Q is know for his uncensored gangster persona and being outspoken about first-hand life as a “gangbanger” in L.A. Using life experiences mixed with unique vocals and flows, Schoolboy has composed numerous charting hits such as 2x platinum “Collard Greens” featuring longtime friend and fellow Top Dog Entertainment signee Kendrick Lamar, as well as Grammy-nominated single “Studio” featuring BJ The Chicago Kid, both off of his Billboard topping 2014 album Oxymoron.

Dipping into his extensive catalog of albums, mixtapes, and collaborative songs, Schoolboy Q powered though his nearly hour and a half long set, filling it with more than 20 of his most memorable cuts. The L.A. rapper kept in touch with the Houston audience with lyrics from songs such as Collard Greens — “I know my Houston partners drop a four on this, and focus, and slow it down” — and getting the audience’s help with the line “Astro on my hat” from “Break the Bank. (The Hoover Crips are know for wearing Houston Astros hats to show their gang affiliation via the large “H” on the front.)

Schoolboy also put his own flare on some of his collaborative songs such as 2016's “That Part”, before performing Kanye West’s verse saying “Kanye on his gospel shit right now, so we're gonna have to turn this one up for ourselves!” and removing Lil’ Baby’s verse on his new song “Water” and replacing it with an unheard verse.

The rapper's high energy mixed with the volume and magnitude of his songs left the Warehouse Live audience in an exhausted and satisfied state. Those who have been waiting to see the Los Angeles gangster perform for a least three years got their money's worth and the bar was set for the remainder of the tour. 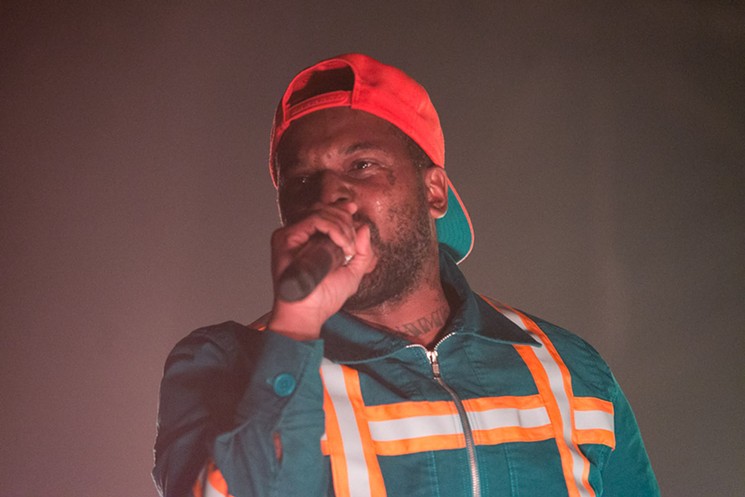 23. Hell of a Night
KEEP THE HOUSTON PRESS FREE... Since we started the Houston Press, it has been defined as the free, independent voice of Houston, and we'd like to keep it that way. With local media under siege, it's more important than ever for us to rally support behind funding our local journalism. You can help by participating in our "I Support" program, allowing us to keep offering readers access to our incisive coverage of local news, food and culture with no paywalls.
Make a one-time donation today for as little as $1.