Last spring, Rudyard's invited Houston Press into "the living room of Montrose" to see some of its new furniture, specifically a revamped stage for the longtime bar, restaurant and entertainment venue. We met with owner Lelia Rodgers and she recalled some of the best music nights in the venue's history during her 28-year tenure.

Fast forward to this spring and Rudz was a trending topic with local musicians. Using the hashtag #rockatrudyards, they were recalling their own favorite moments playing the club’s upstairs room - and openly questioning the establishment's ongoing commitment to music. Their social media posts suggested live music events had become a casualty to Rudyard's growing interest in comedy.

Is live music done at Rudyard's, a venue where thousands of local acts and some prominent national ones - White Stripes, The Shins, The Decemberists, etc. - have held court in the club's spacious upstairs space? We reached out to Rodgers for clarification and clarify she did, first in a written statement and then with an invite to meet for a chat about music's future at Rudz.

The good news is music will continue to have a role at the Waugh Drive staple. But, for now, live music is taking a backseat to comedy shows. Here's Rodgers' statement in full:

“Rudyard’s Upstairs has been operating as a performance & event space for almost 25 years. The room easily holds 200 people standing or 125 seated at tables & the bar. The stage & sound booth are features that shape the layout of the room, but don’t necessarily dictate all of its activities. Although the most prominent usage of the upstairs has been for original live music performances by bands ranging from legendary local bands to regional powerhouses and national showcases, a variety of events have enjoyed utilizing the space. Specifically, spoken word presentations, including touring stand-up comedy, weekly comedy open mic, monthly storytelling shows, performance poetry events & even an occasional theatrical production, have found a home on the Rudyard’s stage. Other activities that regularly utilized the upstairs have included monthly beer & food pairing dinners, dart tournaments, regular organizational meetings and social events, such as, showers, receptions & celebrations of life. Therefore, I’ve always viewed Rudyard’s Upstairs as a hybrid venue whose performances were driven by the original live music bookings."


For Rudyard’s, the pandemic safety protocols were in place from mid-March 2020 through May 2021. During that time, the room’s usage was restricted by these safety protocols we embraced, managed & maintained for our staff & customers. Activity in the hospitality industry has rapidly reopened since the beginning of June, but prior to that time, management had to make operational calls on how to proceed into a near term future that was poorly defined & subject to change with little or no lead time to adapt.

At the beginning of 2020, Rudyard’s completely renovated the stage area upstairs – redesigned, rebuilt, relighted & added equipment – for enhanced performance presentation. We hosted our first & only regular band performance on Friday, March 13, and then experienced what became a months’ long cancellation of live music shows. After implementing precautions we felt were effective, we moved forward with offering spoken word events which were primarily comedy shows. Rudyard’s Upstairs was able to remain open because of their success. Therefore, when we were asked to formalize our commitment to comedy, thereby allowing them to attract some national acts, we agreed. Prior to the opportunity to host the School of Rock performance weekend in mid-May, 2021, we had decided not to start booking bands again until after Labor Day. For the moment, the Rudyard’s performance calendar is almost fully booked through 2021 with comedy shows. We are not seeking to book music until later in the year but are talking to people who bring performance opportunities to us for consideration.

Rudyard’s is comprised of several moving parts which has allowed us to navigate successfully though this national crisis. We are proud to count ourselves among the standing as the curtain rises on the return of more normal activity and crowds. However, operationally, much has significantly morphed during the past year that requires attention and adjustment. Our menu has had to adapt to changing prices and availability for its ingredients. We find ourselves managing a delivery business that necessity built but we would dearly like to keep. Building recognition in the competitive Houston market as a new player in the craft cocktail world is demanding. Bringing our draft system back up to full capacity as the selection & availability of craft beer comes rapidly back online requires oversight. Dart lanes are being spruced up as the dart leagues start forming again. The performance calendar for the venue space upstairs is one area that has had some continuity throughout this timeframe.

My hope is that original live music shows will organically start reappearing on the performance calendar over the next 12-18 months. As artists and audiences become increasingly comfortable with putting on & being entertained by shows inside smaller venues, Rudyard’s will find its way back to being part of the live music mix of venues in Houston. Rather than music driven as in the past or comedy driven as now, I see Rudyard’s Upstairs becoming something more balanced with shows that attract a crowd genuinely interested in keeping local, intimate Houston entertainment venues vibrant & alive.”

At the club, Rodgers said she’d heard murmurs about live music being done at Rudyard’s.

“It has basically, without a doubt, taken a back seat. Comedy is what kept this room open during the pandemic and we’re kind of dancing with the one who brought us to the party,” she said. “We haven’t even talked to bands because we weren’t even going to think about bringing back bands until the fall. And that was a decision we had made much earlier in the year.”

She said the rapid pace of resuming "business as usual" has been challenging.

“In 30 days everything went from nothing to wide open,” she said. “Suddenly, in June, we started putting the word out that we’re not out looking for shows, but if you have something and you want to bring it to us to show it to us, we’ve got some weekday nights that would be available for local stuff. We know it’s not perfect. And, when we put that word out, that’s when we started getting the backlash. Everybody was interested in weekends and it’s like, ‘Well, our weekends are all comedy,’ and then they were like, ‘Oh, you’re a comedy club now.’

“Then, we just kind of went turtle on the whole situation,” she admitted. 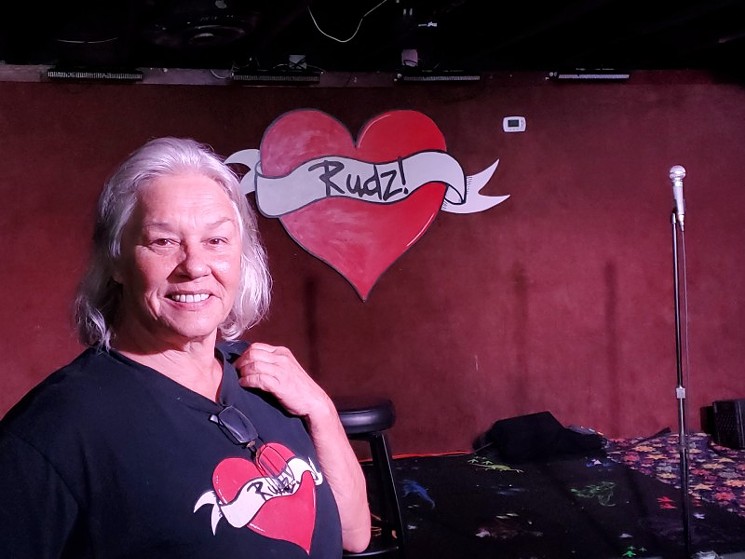 She hopes this will set the record straight, quell some nerves and remind the arts community that the establishment has thrived for more than 40 years because it’s embraced this city’s diverse talents. Whether in the kitchen, behind the bar or upstairs onstage, there’s room for all of that diverse talent at Rudz, Rodgers stressed.

“I do know there’s some disappointment,” she said. “People knew that we had done this new stage and they were excited about getting up on it.

“I absolutely see where they’re coming from,” she continued. “Part of the secret of being relevant for 28 years is to see the other side of the picture. I don’t see myself as the protector of my staff, but being the one that stands and supports my staff, without losing any of that, I am able to see the other side of the picture from people who want to perform here, people who want to come here and enjoy themselves. That has been a two-edged sword, but I think it’s also part of my secret weapon in being able to get a hint about when things need to change and how things can change to continue being relevant.”
KEEP THE HOUSTON PRESS FREE... Since we started the Houston Press, it has been defined as the free, independent voice of Houston, and we'd like to keep it that way. With local media under siege, it's more important than ever for us to rally support behind funding our local journalism. You can help by participating in our "I Support" program, allowing us to keep offering readers access to our incisive coverage of local news, food and culture with no paywalls.
Make a one-time donation today for as little as $1.