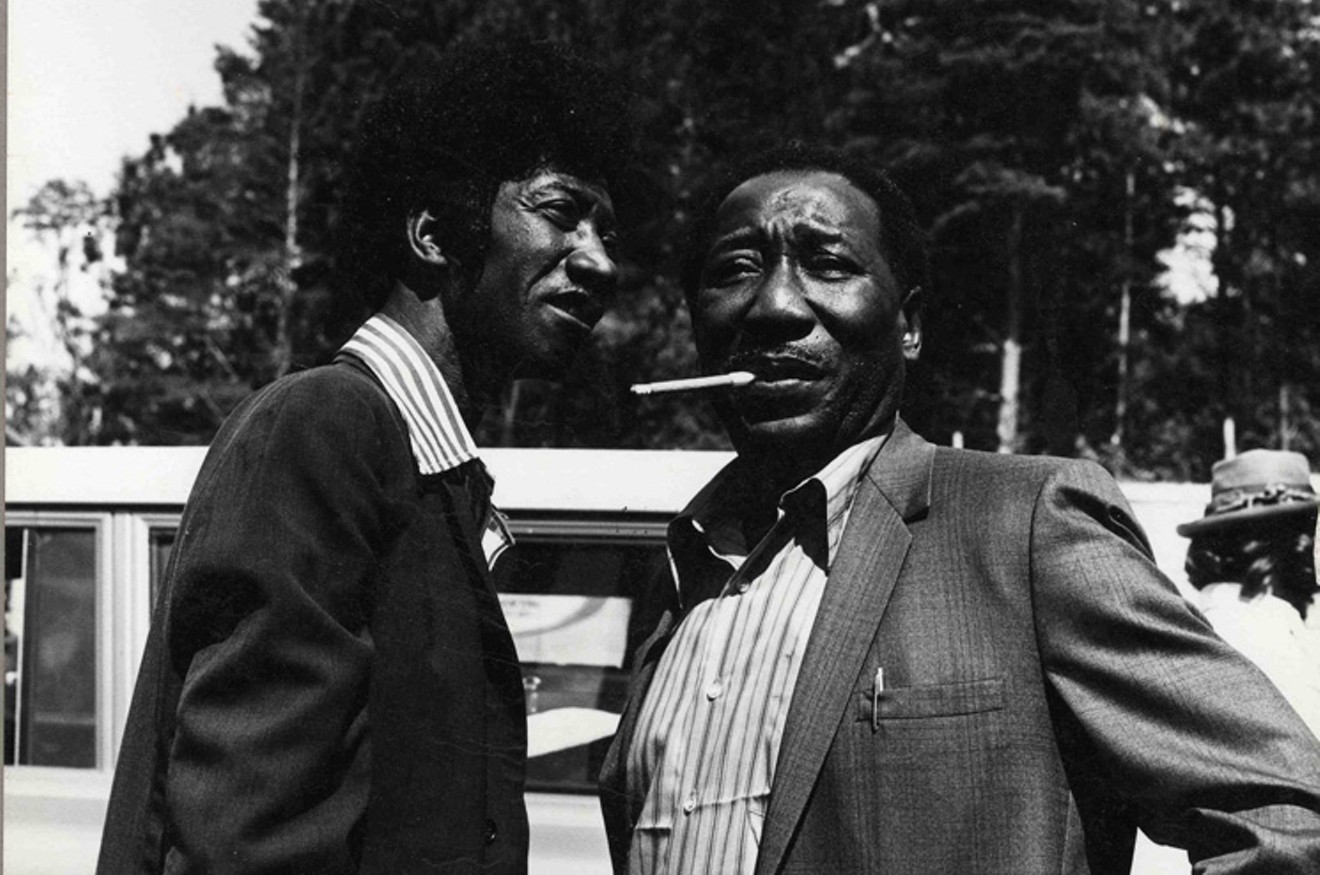 Hound Dog Taylor (left, in afro wig) with Muddy Waters at the 1972 Ann Arbor Blues & Jazz Festival. Photo by Ira Lax, Ann Arbor District Library Collection
There aren’t many artists who can say that someone created an entire record label and business for the sole purpose of putting out an album by them (and in fact, this might be the only instance). 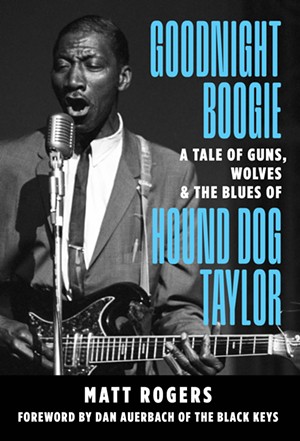 Book cover
But that’s what superfan Bruce Iglauer did for his favorite local Chicago blues band, Hound Dog Taylor and the HouseRockers. And that’s precisely how Alligator Records—which recently celebrated its 50th anniversary as one of the most popular and influential blues labels ever—took its first bite.

And while he never achieved the commercial or popular success of friends and contemporaries like Elmore James, Howlin’ Wolf, Muddy Waters and B.B. King, Taylor’s gutbucket, raw, “lo-fi blues” has influenced many a student including Jack White, the Black Keys, George Thorogood, and the Jon Spencer Blues Explosion.

The story of Taylor’s life and music is told in the new biography Goodnight Boogie: A Tale of Guns, Wolves, & the Blues of Hound Dog Taylor by Matt Rogers (272 pp., $19.99, BMG Books).

The “wolves” of the title refer to the frightening, recurring lifelong dreams that the rail-thin Taylor would have of being chased by the fang-bearing beasts. That stretched back to when he was a boy in Mississippi picking cotton on a plantation—though he was put out of the house at age 9 by his angry stepfather.

Taylor began playing blues early, and by his mid-twenties was a popular local attraction in Mississippi. But a made-for-the-movies late night visit from the Ku Klux Klan—complete with burning cross on his lawn and men with guns and dogs looking for him—hastened his decision to move to Chicago.
The Klan’s visit was purportedly to have a talking to Taylor about his suspected dalliances with one of the Klan member’s wife and area white women in general. Later, he was bestowed the nickname “Hound Dog” for his propensity to sniff out women wherever and whenever he could (despite having a decades-long common law wife).

Two physical attributes also marked Hound Dog Taylor: He was born with an extra pinky on both hands. He later drunkenly chopped the one on his right hand off with a straight razor because it bothered him. He was also a raging alcoholic whose main sustenance all day everyday seemed to be Canadian Club whisky and cigarettes. Years later, he was especially excited to be touring the country because that’s where the drink was made! 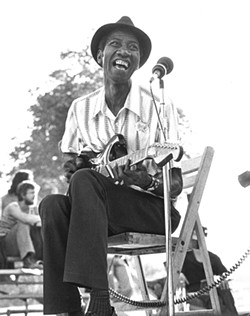 Hound Dog Taylor at the 1973 Ann Arbor Blues & Jazz Festival.
Photo by Diane Allmen
And when Taylor was scheduled to play a blues Festival in the early ‘70s but was suffering withdrawals because he didn’t have any booze to drink, Iglauer broke into a local liquor store and stole enough whisky to keep the band going.

Despite grinding it out for more than a dozen years in Chicago clubs to mostly Black audiences, Taylor found it hard to break through on a national level. Earlier in his life, Taylor claims to have shown Elmore James the song “Dust My Broom” and his slide guitar technique—the single song would skyrocket James to stardom.

What did set Taylor apart was his musical stylings and his band. With Taylor on guitar and lead vocals, Brewer Phillips on second guitar, and Ted Harvey on drums (they had no bass player), the trio played a raw, distorted, more hard-edged blues sound, accented by Taylor’s preference for cheap Japanese electric guitars and amps that made fuzzy sounds.

Rogers chronicles the decades-long testy relationship between Taylor and Phillips. The pair would just as easily engage in screaming matches, punch-ups, and gun-or-knife drawing contests as play together onstage. Phillips left several times but was always talked into coming back. That ended later in the band’s lifespan when Taylor actually shot Phillips three times with a rifle during a drunken house party. Phillips survived, and Taylor was charged with attempted murder but skated punishment.
The story of how Iglauer put up the money for Taylor’s 1971 Alligator debut Hound Dog Taylor and the HouseRockers is part of blues lore (and also covered in Iglauer’s excellent autobiography, Bitten by the Blues). Rogers fills in details about the U.S. worldwide tours that would follow in which Iglauer served as road manager/caretaker/guidance counselor, and the fraught times of his getting the band to gigs and trying to guide Taylor, capable of self-sabotage at times.

Broken in body by years of abuse and suffering from lung cancer, Hound Dog Taylor died in 1975, a year after recording and releasing a second album. But he remains not only an inspiration to blues rock players and a cult figure, he’s in a sense the spiritual father of Alligator Records. It’s not for no reason that his best-known tune “Give Me Back My Wig,” leads off each of the label’s ongoing anniversary compilations.

Matt Rogers has done a wonderful job in illuminating the life and music of a true blues character and fills in a very-much needed hole in blues scholarship with Goodnight Boogie. Which is also the title of the last song that appeared on Taylor's last studio record, and a fitting epitaph.
KEEP THE HOUSTON PRESS FREE... Since we started the Houston Press, it has been defined as the free, independent voice of Houston, and we'd like to keep it that way. With local media under siege, it's more important than ever for us to rally support behind funding our local journalism. You can help by participating in our "I Support" program, allowing us to keep offering readers access to our incisive coverage of local news, food and culture with no paywalls.
Make a one-time donation today for as little as $1.