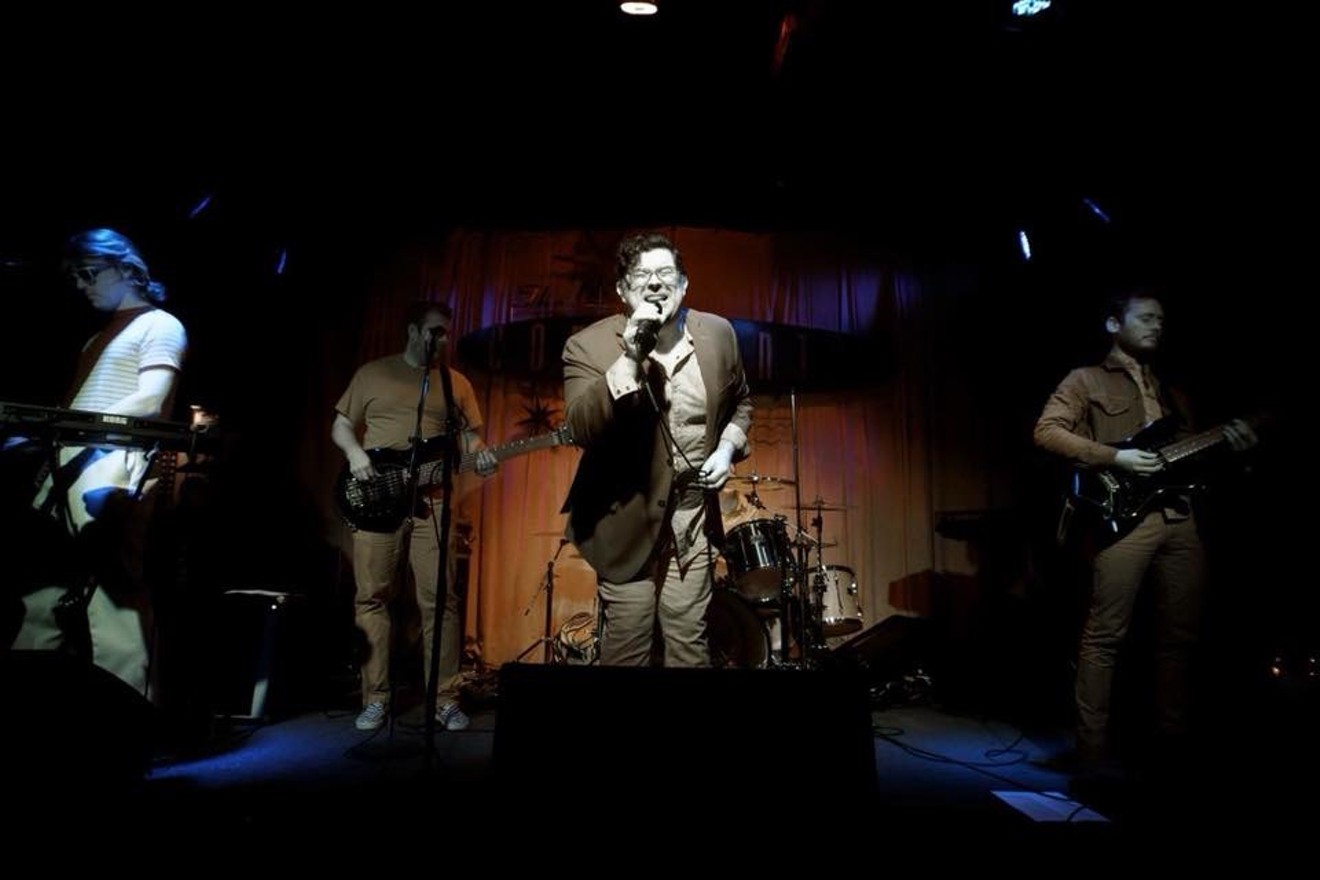 Xanadudes (Now We Are Here) members Mark Beebe, Blake Powell, Tomas Escalante, Phillip White (on drums), and Wes Essary. Photo by Jay Lee/Courtesy of Tomas Escalante
We have now reached an age in Gen X’s lifespan where musicians who soundtracked their youth are beginning to pass on more frequently — by causes natural or otherwise. Recently, obits have been written and mourning commenced for Prince, Tom Petty, and Eddie Money.

That Gen X also grew up with MTV where artists visually came into their living rooms probably forged an even closer link. So when lead singer/guitarist of the Cars Ric Ocasek died last month at the seemingly impossible age of 75 (!), the mourning wasn’t so much for an artist vital in contemporary times, but for the mourner’s own long-lost youth.

Premier local ‘80s cover band Xanadudes (Now We Are Here) certainly count the music that Ocasek wrote as part of their musical DNA. The band will perform a special mini-Cars concert as a tribute to Ocasek and part of their regular show on November 2 at the Continental Club.


“I hadn’t heard anything he’s done in the past 20 or 25 years, but when he died, I felt very sad because the songs he did write were such an integral part of my childhood and music vernacular,” says Mark Beebe, who handles keyboards, rhythm guitar, and some vocals. “And I have a feeling a lot of other people feel the same way when one of their favorite artists passes away. You start thinking about all the great stuff you have heard. You appreciate the finite quantity of music.”

“It’s like a part of you dies with them, and you don’t want to let go of that,” lead singer Tomas Escalante continues. “But the music still lives on. How many artists have become just immortal after the fact? Look at Townes Van Zandt – his legend grew so much after he died.”

Xanadudes (Now We Are Here) [and yes, that’s their full name – there’s another band just called Xanadudes out there] have done tribute sets as part of their shows in the past for artists both living and deceased. They’ve done a previous Cars segment, but the upcoming one will be expanded to a “mostly hits” show of about 45 minutes. Including at least one new addition.


For Beebe, it’s going to be their first crack at the power ballad “Drive,” which was actually sung by bassist Benjamin Orr. While Ocasek was the main vocalist (and wrote most the material) for the band, it’s Orr you hear on that and other Cars hits “Just What I Needed” and “Let’s Go.” That made it ironic that the go-to song on social media paying tribute to Ocasek upon his passing seemed to be…”Drive.”

Escalante believes that there’s one modern concession surrounding musician deaths. Now when an artist passes, it’s easier than ever to learn, revisit, or plumb deeper into their catalog with streaming services and YouTube.

“It works for today’s generation,” he says. “When we were growing up, you had to just wait for a video you wanted to see to come on. We had to be super tied into and involved in the music. Today, you can listen to or watch anything at any time.”

Also in his youth, Beebe has “strong memories” of that “weird synth intro” to “Let’s Go.” He was also fascinated with a wall-sized poster of the illustrated cover for 1984’s Heartbeat City on display at Sound Warehouse on Voss. Though as he was about 5 or 6 years old, Beebe admits he was more interested in the graphic of the 1971 Plymouth Duster car than the large-bosomed, bare-midriffed, tight short shorts-wearing blonde girl on the cover.

Escalante is not so monkish in his favorite Cars-related recollection. Although he knows that it’s not the nice backyard body of water that makes his memory so memorable.

“All I have to say is…Phoebe Cates!” he laughs. “There’s not any forty or fiftysomething guy who hears ‘Moving in Stereo’ and doesn’t think of…Phoebe Cates coming out of that swimming pool in Fast Times at Ridgemont High!”

Xanadudes (Now We Are Here) play at 9 p.m. on November 2 at the Continental Club, 3700 Main. For information, call 713-529-9899 or visit ContinentalClub.com. $15-$25.
KEEP THE HOUSTON PRESS FREE... Since we started the Houston Press, it has been defined as the free, independent voice of Houston, and we'd like to keep it that way. With local media under siege, it's more important than ever for us to rally support behind funding our local journalism. You can help by participating in our "I Support" program, allowing us to keep offering readers access to our incisive coverage of local news, food and culture with no paywalls.
Make a one-time donation today for as little as $1.